Coming of Age in to Kill a Mockingbird

Unveiled Eyes
In Maycomb County, Alabama during the Great Depression, Atticus Finch, a lawyer in Harper Lee’s To Kill A Mockingbird, explains to Scout Finch, his daughter, that “you never really understand a person until you consider things from his point of view – until you climb into his skin and walk around in it” (39). At first, Scout does not understand the meaning of his words, but as she matures through the novel, her eyes are unveiled, and she understands what Atticus is trying to tell her.

Don't use plagiarized sources. Get your custom essay on
“ Coming of Age in to Kill a Mockingbird ”
Get custom paper
NEW! smart matching with writer

Over time, Jem, too, starts to see the meaning and depth of the statement. Throughout the course of the book, Jem and Scout both learn that one must know and respect people for who they are as individuals, not for what they appear to be.

Mr. Dolphus Raymond is a character who is known by the citizens of Maycomb County for what he appears to be, but Scout recognizes that he is not what he seems to be.

Proficient in: Coming of age

Mr. Raymond is a wealthy white man who has mixed children, a black wife, and his company is usually made up of Negros. As a cover-up for his abnormal behavior, he pretends to be drunk all the time. Maycomb declares that “Dolphus Raymond’s in the clutches of whisky” (268). In truth, he is just trying to give Maycomb a reason for his unorthodox actions when it comes to his strong friendships with Negros. He says that “it helps folks if they can latch onto a reason” (268).

Like Atticus, Mr. Raymond believes that blacks should be respected more and treated like people instead of animals. He is part of “the handful of people with enough humility to think when they look at a Negro” (316). Scout starts to get Mr. Raymond’s reasons for “drinking” and his preference for black company. She also begins to learn that in life, there is racism and persecution for those that are not up to Maycomb’s standards.

Tom Robinson is a young black man who is discriminated against by Maycomb citizens because of his skin color, but Scout learns to think differently. He is accused of raping Mayella Ewell, a white nineteen-year-old lady. Just because of his complexion, he is convicted of the rape despite the proof that his left hand is completely shriveled up. Scout remembers that “a jury never looks at a defendant it has convicted, and when this jury came in, not one of them looked at Tom Robinson” (282). Like most Negros in the South, Tom is discriminated against by many white citizens. He is actually a very nice, caring man, but that is not what Maycomb believes.

Maycomb groups him together with all the other blacks. According to many of its citizens, there is no good or bad in the black group. They are just Negros, but Atticus contradicts Maycomb’s beliefs by saying “that [not] all Negros lie, that [not] all Negros are basically immoral beings, that [not] all Negro men are not to be trusted around our women” (273). Over the course of the trial, Scout and Jem see that what Atticus says is true because Tom is a perfectly good example of a Negro that does not lie, is a moral being, and can be trusted around women. In the period of about two years, Scout learns that there is not only racial injustice, but also discrimination against recluses.

Arthur (or more commonly known “Boo”) Radley is another person who is seen for what he rumored to be, but like Mr. Raymond, Scout discovers he is not what he is rumored to be. According to Jem, he is “about six-and-a-half feet tall— he dine[s] on raw squirrels and any cats he [can] catch, that’s why his hands [are] bloodstained—if you [eat] an animal raw, you [can] never wash the blood off. There [is] a long jagged scar that [runs] across his face; what teeth he ha[s] [are] yellow and rotten; his eyes pop, and he drool[s] most of the time” (16). Most Maycomb citizens, including Scout in the beginning, think that Boo Radley is a lunatic that nobody wants to mess with. As the story progresses and Scout learns about Mr. Dolphus Raymond and Tom Robinson, she starts to see why Boo wants to be a recluse. He wants to escape from the evil and discrimination in Maycomb.

Towards the climax of Boo’s story, Scout starts to see Boo as an actual human, not just as a rumor from Miss Stephanie Crawford, the neighborhood scold. She sees him as a living human being and cares for him, unlike most Maycomb inhabitants. In the end, Scout realizes that “Atticus was right. One time he said you never really know a man until you stand in his shoes and walk around in them. Just standing on the Radley porch was enough” (374). One night, she drowsily remarks about the character in The Gray Ghost “Atticus, when they finally saw him, why he hadn’t done any of those things…Atticus, he was real nice…” (376). This is symbolic of Boo Radley because he is rumored for things he had never done, but when Scout finally meets Boo as a person, she finally realizes that all those accusations are lies and one must respect others as individuals.

Over the course of Harper Lee’s To Kill A Mockingbird, the main characters Scout and Jem learn to respect and treat others for who they are as individuals. By meeting three other characters of the novel, they learn this important lesson. Mr. Raymond and Tom Robinson both teach the children that it is important to respect and honor the fact that Negros are, in fact, humans along with white citizens. Boo Radley teaches them to stand in another person’s shoes before forming an opinion about them. These two crucial years in the novel teach Scout and Jem the importance of all people in the world. In the end, Scout is much more mature and realizes “there is only one kind of folks. Folks” (304).

Coming of Age in to Kill a Mockingbird. (2016, Mar 18). Retrieved from https://studymoose.com/coming-of-age-in-to-kill-a-mockingbird-essay 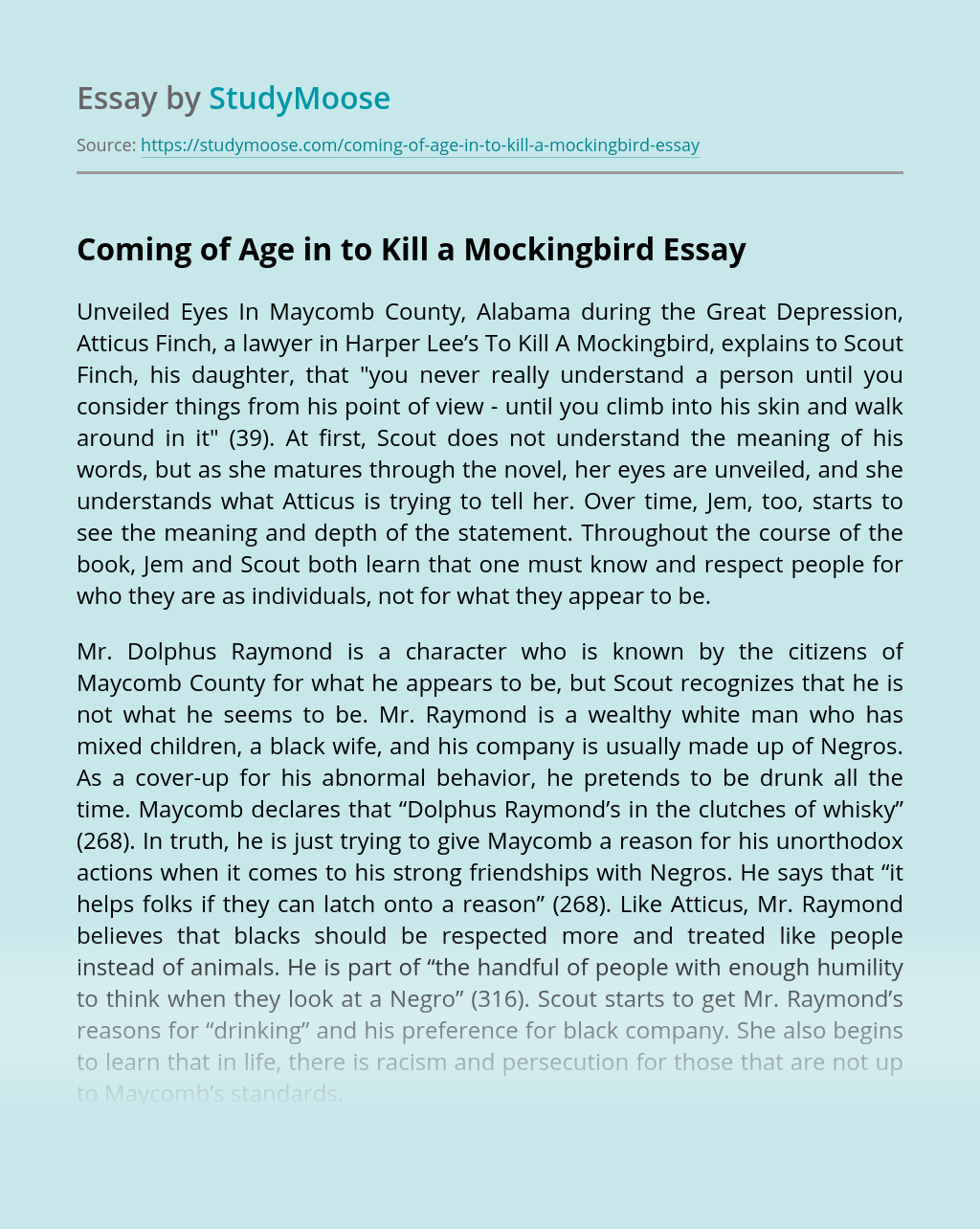