People are the stories they tell themselves, about themselves, and believe. They tell stories for themselves and as a gift to future generations. People need to know and express their own stories. This essay will contrast and compare Bleek and Lloyd’s “The Young Man who was carried off by a Lion” and Casey Motsisi’s “Kid Playboy” by discussing the variations of style, perspective and presentation in relation to some ideas of authorship and the dominant discourse.

“The Young Man who was carried off by a Lion” is an African oral tale, that is in and of itself, in its original form and African language, a fable layered with moral lessons, symbolisms, and is intertwined intricately with various meanings.

Don't use plagiarized sources. Get your custom essay on
“ Comparing the Similarities and Differences Between Bleek and Lloyd’s The Young Man Who Was Carried Off by a Lion and Casey Motsisi’s Kid Playboy ”
Get custom paper
NEW! smart matching with writer

This fable is subject to translation between the original, spoken Indigenous Xan language of the San and Khoi people, to written forms of foreign and colonial languages like English and German. Most of its cultural value is lost in translation as this story is not told by its own people, in the form of which it is originally intended for.

Spoken word stories and written forms demand different attention to detail. A story read when it is meant to be heard, or to be watched as a live performance is problematic. Perhaps, the Khoi and the San symbolism of lions – which were given close association with deities-, the symbolic meaning of a young man hunter, and the tears being licked off the young man by the lion and other key moments are lost to an unlearned audience who are not one with the hunter-gatherer culture.

As no original text exists as the tales were mostly spontaneous, required some improvisation, the only ones that exist now as the canon of San literature is this. Written by members of the invasive forces, German linguist W.H.I. Bleek and his sister-in-law Lucy C. Lloyd colonise the agency for one to narrate one’s own story, in one’s one language in one’s preferred form. The storytelling is overly simplified, perhaps the English language has not the vocabulary, the required poetic language to best express this tale of fate in its inherent richness and depth. The stolen authorship of the tale deduces its effect immensely. These stories that were preserved as cultural inheritance, passed down orally from one generation to another, spoken and performed that added more dimensions to the tale than a flat presentation in the written form. To translate and transcribe a story as Bleek and Lloyd have, and for persons like Elana Bregin to later “rework” a story that is culturally and religiously foreign to them is problematic. They are, in the presentation of the stories oversimplifying and reducing the philosophical significance of the stories as they are more metaphorical than literal – “He lay down and closed his eyes.” The connotations of the words that perhaps are implied in Xan for the same sentence are not in the European language. Issues like death are very sacred in traditional African societies, and related issues of ‘sacrifices’ to ‘appease’ deities that are relegated by inference to the dominant discourse of Africans being savages and uncivilised, through implying the unreluctance readiness to sacrifice a child, or children, or even specifically a girl child to save this young man. Africans mourn death, whereas other communities celebrate a life lived, so the sensitivity, sympathy and respect for the young man is not evident, or, adequately expressed in the written form.

A third-person omniscient narrator style is adopted for the telling of this tale. This is like the colonial discourse and the hierarchy premise thereof that thought of Europeans as allknowing, all-seeing, omnipotent beings, elevated from other humans. If the lion represents a deity, then the narrator is above that. This is similar to how European conquest and empire helped shift the idea of deities from animals and animal virtues and character traits to humans or human-like characters. It is suitable to the theme of the story that speaks unto a predetermined destiny, an inescapable fate that one is subjected to as a mere mortal. No amount of dodging and diving. No “zig-zagging” will save one from the path already set for him. The young man couldn’t escape death by rolling up in mats and hartebeest skins., nor did covering with sheltering bushes save him. The moral lesson that one should embrace death as a part of life, and to know that the truth will always triumph over trickery and other falsehoods are the takeaways from this San folklore.

Casey Motsisi’s “Kid Playboy”  makes use of Tsotsitaal, a South African township slang/dialect style. For example, “cherrie” meaning “girlfriend” in local slang, from the French word of the same meaning “dear one” or “darling”. Motsitsi makes use of a first person narrator, Kid Boozer, his alter-ego. Motsitsi is writing his own story. He has a claim ofpersonal agency. The narrative told is not altered or shifted by any direct colonial discourse, it  very much a local story. The narrative is not subject to translation between various languages. A local literary, and journalism culture is exemplified by the narrator being a narrator himself for the Drum Magazine. There is a sense of closeness of the narrator to the culture of the township as he is one of the people, and his telling of the narrative is not ‘removed’ and ‘cold’ as Eurocentric writing is typically characterised, Motsitsi’s authorship style is very much in near proximity with the story itself, not distancing himself, which makes the first-person style effective as he is in the plot as well. Motsitsi, as did all writers for Drum Magazine like Can Themba, Nat Nakasa among others, he is concerned with African stories, to be narrated in an African identity, to always offer an alternative voice is an otherwise westernised world, dominated by Eurocentric views.

Because of the personal nature of a first-person narrator, we are offered his side-of-the-story only and it is of course quite subjective, so his perception of reality is unchallenged. It is a tale of appearance, loss, suffering, responsibility, trust, fear, selfishness and anger. The narrator has lost his “cherrie”, his first love to Kid Playboy. Kid Playboy’s baby-mama has lost the chance to raise the baby with the baby’s father, and the child will lose out on paternal love from his father. Kid Playboy forfeits his chance at a happily-ever-after life with his bride, as has his wife-to-be. It is an ironic tale of loss at a ceremony – wedding – that is associated with unity or togetherness, not coming apart at the seams so theatrically. The implied alcoholism as a sub-culture Sophiatown is not presented as a social dilemma but as a recreational activity, like the beer culture in Germany, Holland and other European states.

When Kid Playboy’s fiancée is a regular at the tavern where the narrator is a regular too, continues to ring truer as it is first and foremost of a ‘real ‘setting, a story of real people, and because our narrator is not omniscient but ordinary and one of and with the people. The human interaction that is based on trust, together with honesty is why the proposed union between Kid Playboy and his “cherrie” didn’t work out, as this is the very DNA of a functional relationship. The element that the narrator also reflects it proper to drink with Kid’s bride in Aunt Peggy’s with Kid’s bride on his lap advises that the narrator may not truly value women. It is as though he wishes to rub salt, proverbially into Kid’s wounds and demean women.

Both Bleek and Lloyd’s “The Young Man who was carried off by a Lion” and Casey Motsisi’s “Kid Playboy” are African stories at their core, but the importance of perspective on a story is highlighted by the difference in a translated transcription of a San fable by a foreign people, in comparison to a local story told by a local writer. The stylistic and presentation values of both tales influence the authorship legitimacy and where the story stands against the dominant discourse. It is perception, style and presentation that influence how stories are seen beyond the basic meanings of the stories.

Comparing the Similarities and Differences Between Bleek and Lloyd's The Young Man Who Was Carried Off by a Lion and Casey Motsisi's Kid Playboy. (2021, Sep 10). Retrieved from https://studymoose.com/comparing-the-similarities-and-differences-between-bleek-and-lloyd-s-the-young-man-who-was-carried-off-by-a-lion-and-casey-motsisi-s-kid-playboy-essay 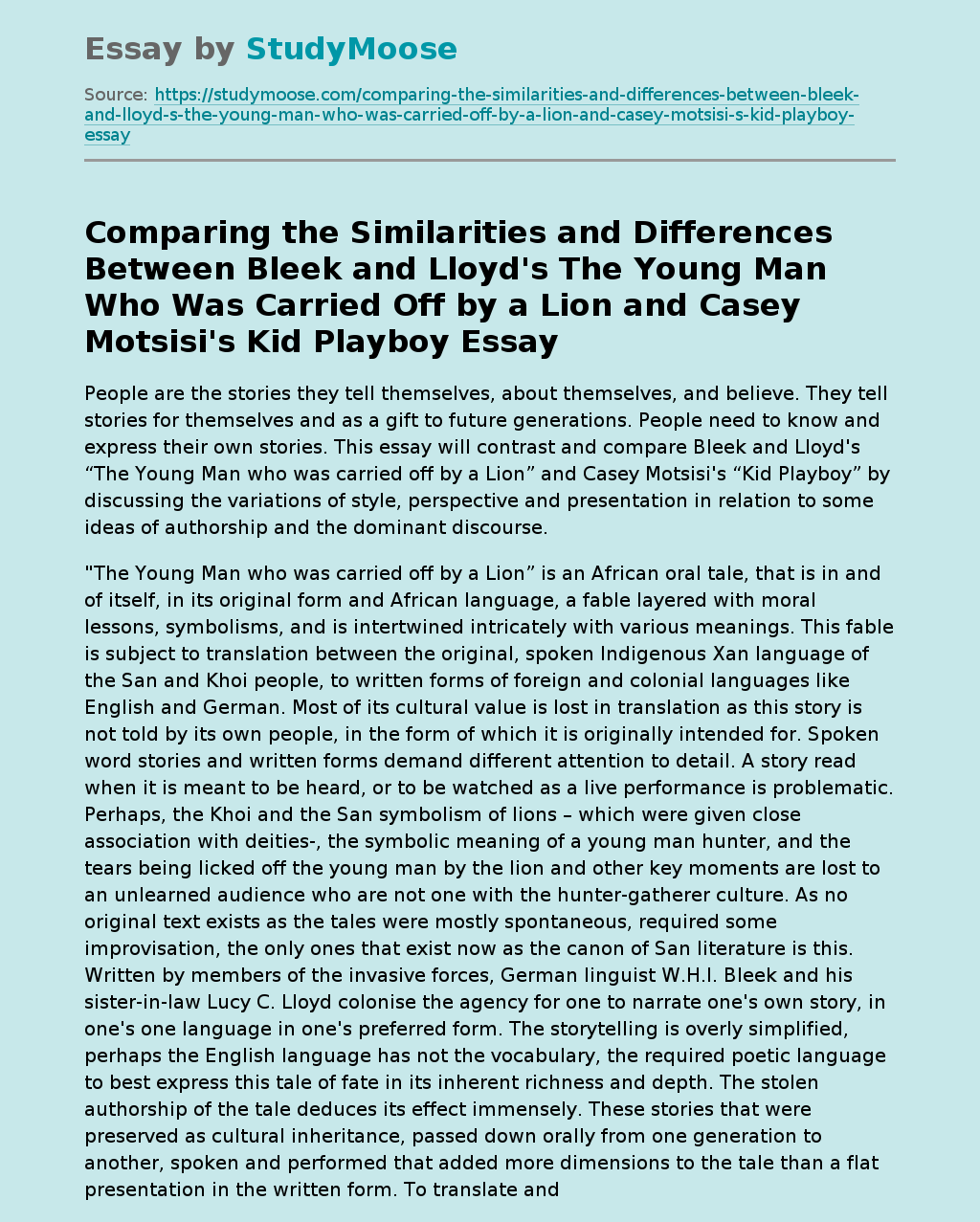