To Kill a Mockingbird Coming of Age

Throughout the book To Kill A Mockingbird Jem changes from a young twelve year old boy to more of an adult figure. Harper Lee shows Jem changing emotionally, mentally and socially. Throughout the book Jem starts to grow out of playing with Scout. He begins to look up to different people and he starts to realize how discriminating his community really is, learning that people should not be judged by what you hear and see. Events such as Tom Robinson’s trial have a big impact on Jem and his change.

Turn in your highest-quality paper
Get a qualified writer to help you with
“ To Kill a Mockingbird Coming of Age ”
Get high-quality paper
NEW! AI matching with writer

Jem changes emotionally throughout the book.

He starts to go with what he feels in his gut, and begins to grow apart from Scout and Dill becoming more like his father. Jem’s first emotional change was when Mrs Dubose died. Mrs Dubose always taught Jem to be determined and preserving and after reading to her Jem became “moody and inconsistent” also Jem became more stereotypical and wanted Scout to be “more like a girl”.

Proficient in: Coming of age

At the beggining of the book he doesn’t quite know about the world and people but near the end he understands people’s motivations and prejudices a bit better. Jem starts to think like an adult as he gets older in the book.

Throughout the book he develops a mind more like his father’s. Atticus teaches Jem “Remember it’s a sin to kill a mockingbird. ”he later on applies this to the situation where Scout wants to kill the Roli poly bug be he tells her not to.

Jem starts to think back to both the Tom Robinson Trial and what his father said to him and realize it isn’t fair to be punished for nothing. “So that’s what you were doing, wasn’t it? ” “Makin’ fun of him? ” “’No,” said Atticus, “Putting his life’s history on display for the edification of the neighborhood. ” Jem seemed to swell a little. “I didn’t say we were doin’ that, I didn’t say it! Atticus grinned dryly. “You just told me,” he said. “You stop this nonsense right now, every one of you. ”.

At the beginning of the book Jem is childish and is eager to find out what Boo Radley is like so he goes out of his way to try and communicate with him or somehow get in contact with him. He does this by sneaking around his house and trying to give him a note through his window. In the start of the book Jem doesn’t realize why Boo Radley stays in his house but after the Tom Robinson trial he knows that its because he wants to. He understands that Boo isn’t a bad person but because of the community they live in he is portrayed as one.

Jem changes socially throughout the book. For example, at the beginning of the book, Scout and Jem are best of friends. In the first summer that Dill came they played together every day. Later, in the middle of the book, Jem starts to mature and stray from Scout. Scout describes the way he acted towards her, “Jem was twelve. He was difficult to live with, inconsistent, moody,”. She goes on to say she cannot understand why he has changed so much. He starts to impose rules on her and tells her to be more of a girl. Scout thought about how just a month ago they were having fun and wrestling like two boys.

Later Jem changes again, but this time he starts to become best friends with Scout again. For instance, Scout gets laughed at when she messes up the play, but Jem comforts her and tells her it is okay. There are many things that affect the ways that Jem matures. There are people, events and lessons that are taught, his family and friends, where he lives, and his age. His morals, ideas and intelligence are always growing and changing. He learns to understand and accept people the way they are and even though the story is told from Scout’s point of view and is mainly not about Jem, The reader gets to watch Jem’s maturation throughout the book.

To Kill a Mockingbird Coming of Age. (2016, Nov 05). Retrieved from https://studymoose.com/to-kill-a-mockingbird-coming-of-age-essay 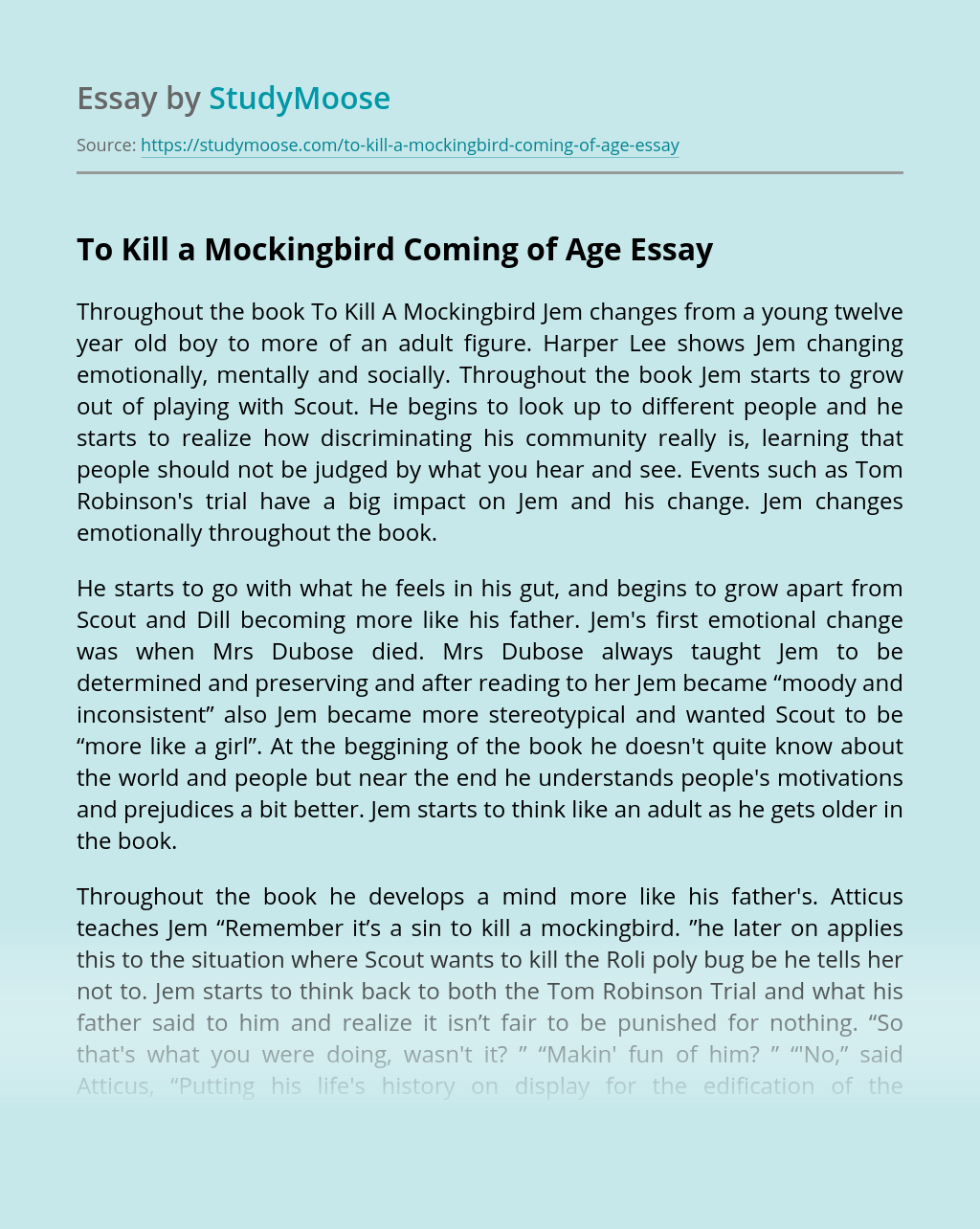 Turn in your highest-quality paper
Get a qualified writer to help you with
“ To Kill a Mockingbird Coming of Age ”
Get high-quality paper
Helping students since 2015
Stay Safe, Stay Original