Grief and bereavement are different for each individual, that is no two people will experience a loss in the same way. A loss is the absence of something we deem meaningful. Over the years there have been many different theories of grief, but it is not a ‘one size fits all’ approach. The aim of this paper is to compare two grief models, namely Dr Elisabeth Kubler-Ross’ Five Stages of Grief and Dr William Worden’s Tasks of Mourning including the Seven Mediators of Mourning.

After comparing the two models the paper will then look at how the two models are different and finish with a case study using one of the models. Dr Elisabeth Kubler-Ross was a Swiss born Psychiatrist.

During her in psychiatry residency she was appalled by the treatment of patients who were dying. She began lecturing medical students and forced them to face dying patients. Her extensive work with the dying lead to the writing of her book ‘On death and dying’ (1969).

In this book she proposed the Five Stages of Grief, being denial, anger, bargaining, depression and acceptance, which most people will feel when faced with death.

Whilst this model was initially for the dying patient it has been later adapted for the bereft. Dr Kubler-Ross notes that these stages are not meant to be completed in a strict order or are indeed the only emotions the bereft will pass through. Other researchers studying the process of loss and grief have recognised these stages as well as the fact that they do not have to be experienced in any particular order but are all part of the grieving process.

The bereaved may vacillate in and out of some stages before completing this part of the process. Grief begins at the moment a loss is recognised, long before death actually happens. Dr Kubler-Ross’ Five Stages of Grief will be explained in more detail below: Denial. Shock and disbelief that the loss is happening.

Numbness and even a sense of isolation that takes over the bereaved and for brief periods of time. Do they remember that they have suffered the loss? Anger. Why me? The bereaved may find themselves angry at the loss or themselves for wishing it would all end. Bargaining. This is usually about making a compromise with God or other deity. “Just let my baby have a heart beat on this ultrasound and I’ll do whatever you want” or your friend asks God to let him live a while longer and he’ll promise to quit smoking. Depression. Becoming so sad that things just don’t matter anymore. Feelings of hopelessness, sorrow, and despair overwhelm the bereaved. Acceptance. Coming to terms with reality. Loss is part of life and cannot be avoided. If the loss is the death of a loved one then a feeling of calmness and peace that the berefts loved one is no longer suffering and is at rest or peace, having gone on to a better place.

These stages can come in any order and can be intertwined. The bereft will experience grief in their own way and their own time. Some people will move through the grieving process quickly, and others take much more time to grieve. Some bereaved people may effectively remain in denial for a long time and put off their grieving. The Four Tasks of Mourning is based on research by Dr J William Worden, PhD, who is currently a professor at Biola University in California. Dr Worden (2009) theorised that the grieving process was broken down into four main tasks of grieving and seven mediators of mourning which could be addressed individually or at the same time. Dr Worden’s Four Tasks of Mourning are:

Task 1: To Accept the Reality of the Loss. During this task, the bereft must face the reality that the loss is real. In the case of a death the bereft must come to harsh terms that the deceased is never coming back. Task 2: To Process the Pain of Grief. This task is just as the title of the task suggests, that is, to process the pain and to find a way to cope with the pain until it passes. Task 3: To Adjust to a World Without the Deceased. Within this task there are three adjustments that need to be made; external adjustments, internal adjustments, and spiritual adjustments.

These mediators include many of the risk and protective factors identified by the research literature and provide an important context for appreciating the idiosyncratic nature of the grief experience (Corr & Coolican, 2010). Issues such as the strength and nature of the attachment to the deceased, the survivor’s attachment style and the degree of conflict and ambivalence with the deceased are important considerations. Death-related factors, such as physical proximity, levels of violence or trauma, or a death where a body is not recovered, all can pose significant challenges for the bereaved. Dr Worden’s work is an important development in the understanding of the process of coping adaptively with bereavement as each task is clearly defined in an action-oriented manner.

The writings of both Dr Kubler-Ross and Dr Worden have had a substantial impact in the world of loss and grief. Although the simplicity is surely attractive, Dr Kubler-Ross’ theory has not been supported by research and it has largely been abandoned by clinicians and researchers alike (Harvard Mental Health Letter, 2011). Dr Worden (2009) suggested that we look at grief as a series of tasks rather than stages as detailed above. Both models have what could be defined as steps in the grieving process and these steps provide the counsellor a theoretical framework in which to work. Neither of the two models are designed to be linear in their process and in fact the bereft may swing back and forth between some of the steps in each model.

The danger with these, and all other models, however, is that they can be normative and tell people how they ought to experience grief. Individuals are all unique and experiences of grief vary from person to person. Therefore, the emphasis on moving through the stages may not, in reality, respect where each individual is. After all, some may never actually want to “get over” the death of a loved one. Consequently, there is a risk that people who are not following these stages might be labelled as suffering from a “complicated” or “unresolved” grief and may be intervened with unnecessarily or inappropriately (Hamama-Raz, Hemmendinger & Buchbinder, 2010). Case Study

Penny is 48 years old. She is in a defacto relationship with Leonard for the past seven years. She has three grown up children, one living nearby, the other living in Melbourne, and her daughter, Katherine (24 years old), living at home and working. She is healthy and has a steady job. She has limited contact with the husband from whom she had been divorced when the children were very young. Leonard is a magazine editor and had never married. When he had met Penny they seemed just right for each other. They were each other’s best friend. Leonard had not been feeling right for a short time before consulting his doctor. Tests showed a malignant mass in his bowel. He was operated on to remove the mass and he was to begin chemotherapy soon after.

This weighed heavily on Penny and Leonard, despite the optimistic prognosis offered by Leonard’s doctors. In Penny’s life, the routine of the household was that she woke Katherine up in the morning, as she was notorious for sleeping through her alarm clock and arriving late for work. One morning, Penny bent over to shake Katherine awake, but this morning she could not be awakened.

She had died during the night. Penny called an ambulance, and within minutes the paramedics were there but Katherine had been dead for several hours. The doctors were unable to establish a cause of death even after extensive testing. The next days were a total blank as Penny went through the motions of all that had to be done. The family gathered, the funeral took place, and Penny blocked most of it out. Penny has been unable to function. Her grief and depression are crippling and overwhelm everything. For the first few weeks, she could not eat or sleep. She was unable even to consider returning to work, as she was immersed in her grief. Leonard suggested that she should get some help, so Penny went for group counselling at a local agency.

The group proved somewhat helpful and it enabled Penny to return to work about eight weeks after Katherine’s death. At work, she found herself short tempered, snapping at colleagues, she was preoccupied and could not focus and she was frequently late. She was able to get through the days, only to come home and cry. It was her anger that finally propelled her into individual counselling.

She was unable to be civil to her work colleagues “who were idiots.” The few friends that she still had were objects of her wrath. She found herself irrationally lashing out at anyone who even slightly annoyed her, and she began to feel isolated and frightened by her own actions. She began individual bereavement counselling in December, eight months after Katherine had died. If I was counselling Penny I would assess which of Worden’s four mourning tasks were not complete and make an effort to address the gaps.

If Penny has not accepted the reality of the loss, then Penny has to begin the letting go of the deceased. However, if the difficulty is in experiencing the pain, then I would help Penny feel safe enough to feel both the positive and negative aspects of his or her grief. This safety would be built up through the accepting relationship established between myself and Penny. If adjusting to the environment seems to be the hurdle, then problem solving would become the focus of helping Penny to make the needed changes to get back to living. If Penny were unable to engage in relationships and withdraw her emotional energy from Katherine, then I would have to work with her to help release her from the binding attachment to Katherine and to be free to develop new relationships.

Often the bereft are afraid to let go of the deceased for fear that the deceased will be forgotten. It may be constructive for me to counsel Penny on how to build new connections to Katherine, new ways to think about her in a more spiritual or ethereal manner. I would also urge social connectedness with others by encouraging and supporting efforts in that direction. In conclusion, every person will experience grief and loss at some stage of their lives. It is the way that this grief and loss is handled by the counsellor that can help the bereft deal with their loss and move past it, incorporating the loss into their lives. An effective counsellor can only do this if they are familiar with the theories of grief and loss. 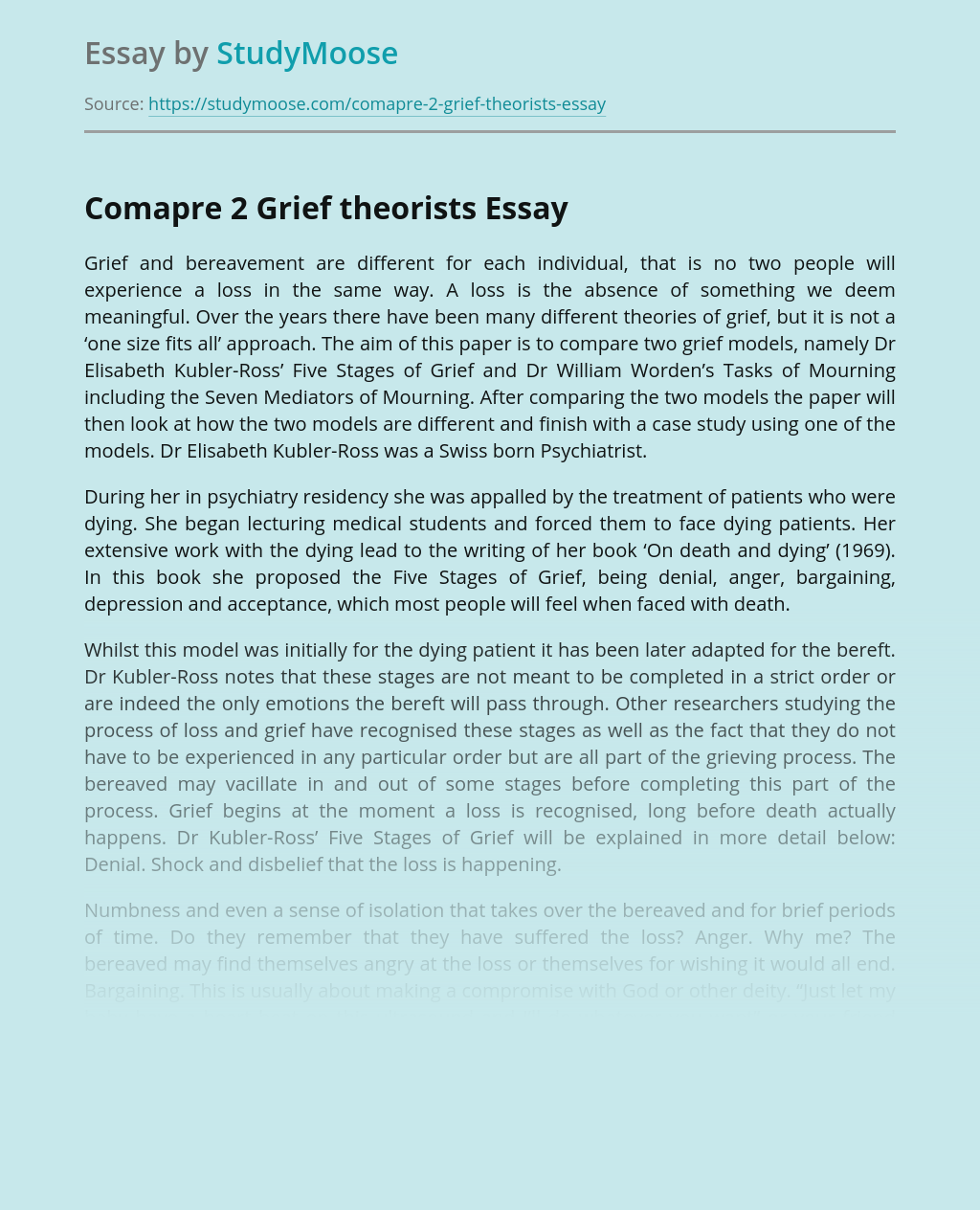