Columbus Day Should Not Be Celebrated

His crime obscured his contribution. A criminal whose hands stained with blood should not be commemorated by people.

Though some of the consequences are not expected by Columbus, his expeditions marked a very bad beginning of the European explorations. On Columbus’s second voyage, his evil desires were completely exposed. The indigenous people finally understood Columbus’s purpose which was to seize treasures from their lands.

When Columbus’s fleet reached the island of Guadeloupe, they encountered the warlike Caribs and were attacked. The Spaniards finally defeated the Caribs and enslaved them. These slaves died out quickly because of the European diseases. Few months later, the tragic story of the Caribs had happened repeatedly on the Arawaks of Hispaniola (Konstam, “Across the Ocean.”) Originally, those lands were possessed by these indigenous people. If some intruders were discovered by them, it was absolutely reasonable for them to drive those intruders away. But as Columbus set his feet on the land of Americas, the disasters were brought to the Native Americans.

Such a criminal person should not be acclaimed as a hero. Columbus was a villain who was too criminal to be commemorated. Another reason is that the U.S. Government should be respectful to the Native Americans who live in the United States. They are also U.S. citizens. Columbus was a hero from the European perspective but a villain from Indians’ perspective. If the government still recognizes Columbus Day as a national holiday, it is very disrespectful and insulting to both its citizens and a group of people. After Columbus’s discovery of the Americas, the native people were enslaved and forced to harvest gold in their homelands. Wars also broke out between the Spaniards and Indians. In a few years, over one hundred thousand Indians died (Solomon, “Columbus Day.”)

Thus, the Indians have a profound hatred of Columbus. As members of the government, the officials should view these historical events in perspective, and treat all the people equally. If the government still treats this controversial figure as a hero, it is the same as they agree with Columbus. This is definitely insulting to the native people. It is too disrespectful to them to celebrate for Columbus Day (“Goodbye Columbus.”) Many people think that Columbus is great because of his discovery of the Americas. However, Columbus’s historical role was not irreplaceable. Christopher Columbus was just a normal one among the European explorers. If Christopher Columbus never existed on the world, another Columbus would also discover the new world eventually. He achieved fame because he lives in an appropriate time period. Before his voyage, the Vikings had already been to the Northeastern of North America and built settlements there (“Leif Erikson.”) Therefore, Columbus was not the first European who discovered the Americas. Furthermore, Columbus did not realize that he discovered a new continent. Instead, Amerigo Vespucci, another Italian explorer, first realized that the land Columbus discovered was a new continent and not a part of Asia.

Thus, the new continent was named after Amerigo (“Christopher Columbus.”) Columbus was neither the first one who discovered the Americas, nor the first one who realized the existence of a new continent. So he was just a normal explorer like the later conquistadors who traveled across the Atlantic to seize treasures. It is not necessary to commemorate such an explorer who did not really make many positive contributions. Columbus, a man of evil desires, gave the Indians painful memories but achieved fame around the world. His voyage opened the prelude of destruction of the Native Americans. Such person does not deserve people’s commemoration. It is evil, disrespectful, and insulting to the Indians to celebrate for Columbus. Thus, the United States should not consider Columbus Day as a national holiday.

Columbus Day Should Not Be Celebrated. (2016, Apr 04). Retrieved from http://studymoose.com/columbus-day-should-not-be-celebrated-essay 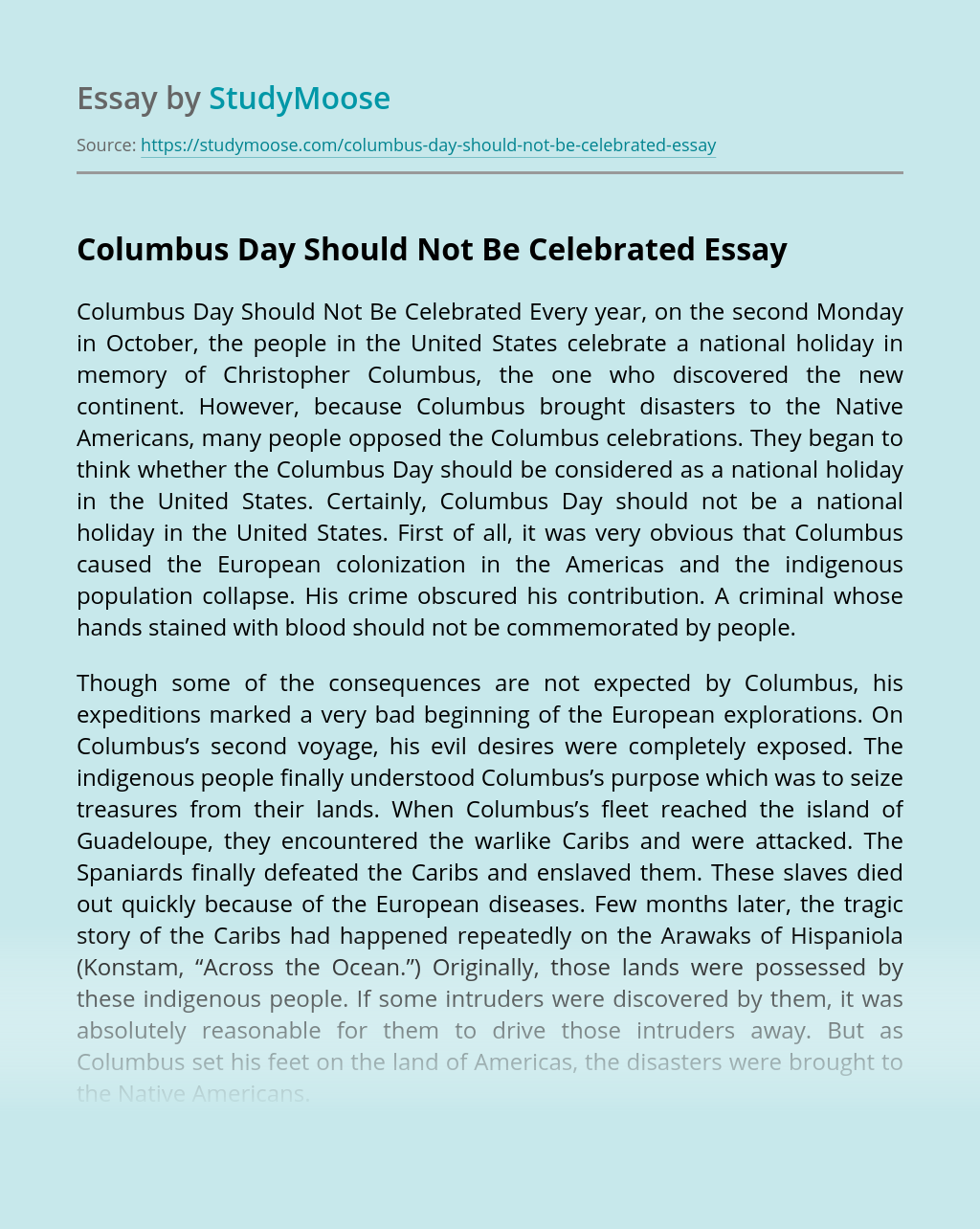 Don’t waste time
Get a verified writer to help you with Columbus Day Should Not Be Celebrated
Hire verified writer
$35.80 for a 2-page paper
Stay Safe, Stay Original