Don't use plagiarized sources. Get your custom essay on
“ Collective Behavior Theories ”
Get custom paper
NEW! smart matching with writer

Even more explanatory than that; behavior that falls outside of the normative expectations for a situation and/or participants. In a normal setting, people wouldn’t behave this way. Norms are established in every society on earth. Every society has its own set of rules and values. They are all quite different in nature. What may be a norm in one place may be unusual or taboo in another place.

That’s just the way the world works. We are all human beings, but that is usually where the comparisons stop. In studying collective behavior, we have learned of many different sociological theories related to the subject.

In 1998 when if you didn’t have a Furby, then you weren’t ‘cool’—collective behavior. Why do we as humans engage in such behavior? Many sociologists have attempted to explain, and as a result, we have many theories on the subject of collective behavior.

One major theory of collective behavior is Emergent Norm Perspective. Key thinkers in this theory are Ralph Turner and Lewis Killian. Emergent Norm explains that when people are in an uncomfortable or confusing situation, they all look to each other for support and guidance. People look for a leader to show them which way to go. People need structure and guidelines. The Emergent Norm Perspective explains collective behavior as something that likely emerges in confusing situations. In these situations, people will turn to each other for guidance. Also learn how to behave in class

There are five types of participants in Emergent Norm situations: the ego involved the concerned, the insecure, spectators, and the ego-detached. The ego involved is deeply concerned and involved with the event, has strong leadership qualities, and pre-existing attitudes that power their actions. The concerned participant is usually concerned, but also feels like it’s not their responsibility to do anything. These participants are usually followers and go with the flow. The insecure participant feels insecure in normal situations, but feels an increased power in collective behavior.

This characteristic leads to satisfaction in collective behavior situations. Spectators just watch but are important because they draw in others and make people more aware of what is going on. The ego detached participant has a personal interest at stake. Some may be interested in doing negative things with the crowd like rioting and looting. Some have a profit minded association. They want to get something out of the collective behavior for their personal benefit. In this theory, behavior that is not punished by the group is considered acceptable and becomes more likely behavior for others.

Typically we know that people will conform to their surroundings, this paves the way for them to follow the emergent norms; the new norms that are created out of a confusing situation. When you don’t know which way to go, follow the crowd. In these confusing situations, people engage in unusual behavior, not to be rebellious, but because for the situation they are in, the behavior now seems normal and acceptable. Turner and Killian developed a process in which the Emergent Norm Perspective will manifest itself. First there is a confusing situation in which people become uncertain of what to do.

Then thoughts start to swirl around about the situation at hand and why the situation exists. People begin to talk amongst themselves and wonder what they should do. This is where the emergence of new group norms begins. Members of the group begin to form a new definition of what is appropriate action. They begin to see what actions need to take place within the group and create norms to satisfy those needs. When these new norms are established, then crowd behavior begins, and the group members begin to act on those norms. Another major theory of collective behavior is the Social Contagion theory.

Major thinkers in this theory are Gustave LeBon, Robert Park, and Herbert Blumer. These thinkers believed that people became temporarily insane within a crowd and then return to normal when they leave the situation. The contagion refers to a rapidly spreading infection. People become engaged in collective behavior and the path of activity spreads over a certain area. The first modern theory of collective behavior used contagion to describe how the behavior spread from person to person like some kind of disease or infection. LeBon thought that crowds changed people.

He believed “members of the crowd are reduced to the level of the least intelligent, roughest, most violent member of the group”. He also believed that in crowds, people rarely understand what they are doing or why they are doing it. According to LeBon, crowds act quickly, do not take time to reason, and can grow to be very powerful in a short amount of time. In the Social Contagion theory, there are three components of becoming a part of the psychology of crowds. First, the individual begins to feel invincible and anonymous within the crowd and begin to do things that are out of the norm.

Secondly, contagion occurs and they begin to sacrifice themselves and their values for the crowd. Thirdly, suggestibility occurs and the mind is formed to the crowd; what the crowd thinks is what you think. According to Robert Park, Circular reaction is when people imitate and reinforce each other’s behavior and begin to participate in intense interaction and emergent interaction. Another term used by Park is Collective Mind. In Collective Mind, crowds suppress differences among people and focus on the same things as a member of the group. This often emerges in stressful situations.

There are similarities between the Emergent Norm Perspective and the Social Contagion theory. Both theories become apparent during stressful situations. It appears that stressful situations draw people closer together as a group. In these theories, most people just want to feel a sense of belonging and a sense of structure even if it goes against what they have been taught their whole entire lives. The need to belong overrides most people’s sense of knowing what is right and what is wrong. Both theories have characteristics of a spreading effect.

In Emergent Norm, group participants look to each other to establish new norms. When new norms become defined, they spread throughout the group quite quickly and then become acceptable. In the Contagion Theory, a group is established and the thoughts and beliefs spread to each member and then to outside spectators which then become members of the collective behavior. Collective behavior may have played a major part in your upbringing. Rumors, urban legends, and myths have all played a major part in the formation of our society.

When I was younger, my mother would always be careful not to flash her headlight at anyone who was driving in the opposite direction and didn’t have theirs on. The behavior stemming from this urban legend goes back to the early 1990s when gangs became really popular to talk about. Gangs were a source of fear in many urban neighborhoods. In regards to the aforementioned urban legend: The story was that a new gang initiation ritual had become prevalent in whichever city you live in. It was said that gang members pile into a car, at night, and drive the highways and byways with their headlights off.

The first person who ‘flashes’ them with their lights being a responsible driver and letting them know that their lights are in fact off, becomes their prey. The gang members then pursue the Samaritan and the initiate must gun him or her down without mercy. In my neighborhood, there was noticeable gang activity going on, so this story struck a nerve for many people, especially those with children to protect. Although, upon the results of future research, no accounts like this were ever found to be true, people would still believe that there was some truth to it.

That is why unusual behavior acts as a release of strain and collective behavior functions as a relief valve for pent-up tension in society. People look for ways to make things fit into society even if they have to make up a story about it. Sure, some things we give value to deserve it, but a lot don’t. No news reports, police statements, or research found any truth to this urban legend, yet my mother still drove, cautiously watching out for cars with no headlights. She always went by that old adage, “better safe than sorry”. Collective behavior plays a major role in the lives of many.

Whether its how we interact with one another on the roads or how we move along through a busy crowd. Social norma are always present and prevelant in our world. Many major thinkers have studied this behavior just to figure out the answer why. Questions arise everyday regarding why we as humans behave the way we do. Everyone has their own answer and together they collectively make one. This study will endlessly go on, because humans continuously change and adapt. There is no doubt that we are always evolving and changing, but some things will always remain the same. 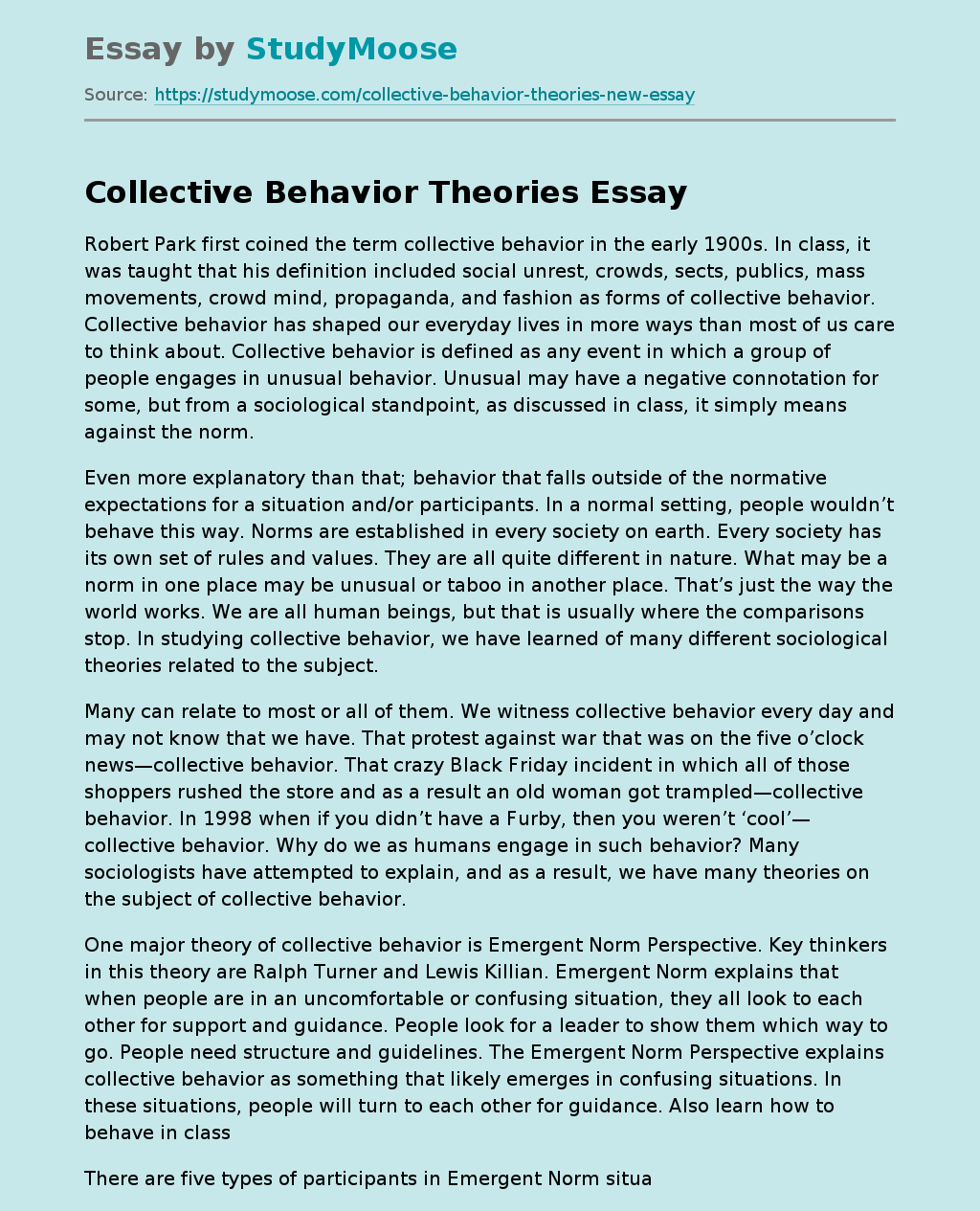