Unwinding is where the parts of the child are separated and given to donors who need them.

Under the Bill of Life, this is perfectly legal. As long as the teenager’s life doesn’t ‘technically’ end. Connor, Risa and Lev find themselves marked for unwinding. And all find themselves drawn together when escaping the process. Firstly, Neal Shusterman highlights major characters to show us how an individual can conquer a collective. A major character Neal Shusterman highlights is the character of Connor Lassiter.

At the end of a novel, Connor finally conquers the collective. As Connor stands under the wing of the jet that brought the runaway unwinds to the Graveyard – an old air force hanger that holds old unused planes and runaway unwinds in the middle of Arizona – he addresses them with courage, respect and determination of conquering the collective. “… … They let us stay here because they don’t see us as a threat. Well we’re going to change that. ” In this quote, I see Connor finally able to conquer the collective.

I see that he is able to finally conquer the Authorities as an individual unwind wanting freedom, though he is able to achieve it with the support of Risa, Haydn and each and every runaway unwind who arrived in the Graveyard. In 1939, Germany invaded Poland and the Second World War began. England’s King at the time was King George VI. It was his duty as the King of England to deliver a speech to the people empowering them and assuring them that though the world was at war again, everything would be okay. However, speeches were not King George VI’s favourite duty as he had a speech impediment.

He had a stammer. Due to his stammer, many believed he could not deliver the speech well enough. Many people believed that a speech on live radio, delivered to the entire nation would be too much of a challenge for their King. But he did it. He did it so well that throughout the entire Second World War, King George VI was a symbol of resistance in the face of Hitler. He was a leader who the people of England were able to stand against. Through his wartime speech, I see how King George VI was an individual able to conquer the collective.

Secondly, Neal Shusterman employs language manipulation to illustrate the ways in which the collective controls the individual. Neal Shusterman uses euphemisms to illustrate this interesting idea. A euphemism is a term or phrase that is used to make something seem nicer that may otherwise be considered harsh, unpleasant or offensive. Throughout the entire novel of ‘Unwind’, Neal Shusterman uses a euphemism to describe the process of unwinding in a way that doesn’t make it seem like dying. “It’s not dying. You will still be living, just in a divided state.

When Risa is told that she is marked for unwinding, a social-worker uses another euphemism to describe the same process. “It’s change, that’s all. You will live, Risa. Only in different form. ” These two different uses of euphemisms by Neal Shusterman to describe the process of unwinding illustrates to me the many different ways in which a collective can control the individual through language manipulation. In the real world, the government uses euphemisms frequently to distance public people form the horrors of war.

Euphemisms such as friendly fire (accidentally killing a member of your own side) and collateral damage (killing civilians) are used to describe things which may distress many members of the public. Another for of language manipulation that Neal Shusterman uses is neologisms. Neologisms are words which describe new concepts or an existing word that has taken on a new meaning. In “Unwind”, Neal Shusterman has brought to life many new concepts in the dystopian world he has created. ‘Clappers’ is one of these neologisms.

Neal Shusterman has used this word throughout the novel to describe a group of extreme terrorists??. “Clappers again… What did they hit this time?… They blew up an Old Navy in the North Akron Mall. ” Neologisms are used to describe new concepts in our ever growing society of technology. ’Cold –finger’ of not emailing or texting somebody back. A neologism in our technological society. Finally, Neal Shusterman uses human rights to make the reader aware of how a collective can control an individual.

The Authorities of in the world of ‘Unwind’ breach many articles of the Universal Declaration of Human Rights. One of the most significant articles which are broken throughout the novel is Article 7. All are equal before the law and are entitled without any discrimination to equal protection of the law. All are entitled to equal protection against any discrimination in violation of this Declaration and against any incitement to such discrimination. In short – The law is the same for everyone, it should be applied in the same way to all. I see this article breached many times in the novel.

The first time I see it breached is in the third chapter of the book when Lev has his tithing party. “… dirty unwind … Just because he’s to be unwound does NOT mean he’s an Unwind. ” This to me shows what the society thinks of unwinds. That they are though of as lower class citizens. No matter how innocent they are, once they are signed over to the government – they are criminals. Wanted by the law, juvey-cops and many of the average citizens. I further see this article breached when Connor, Risa and Roland arrive at Happy Jack Harvest camp.

Connor is discriminated against and paraded past the rest of the unwinds as to show the power and how futile it is to resist to the rest of the inmates at Happy Jack. “On the fourth of February, three kids arrive by police escort. Two are brought unceremoniously into the welcome centre. The third is singled out to take the longer route that passes the dormitories, the sports fields, and all the various places where unwinds are gathered. ” Connor is discriminate against due to his status as the ‘Akron AWOL’. Though he has done nothing more than Risa or Roland. 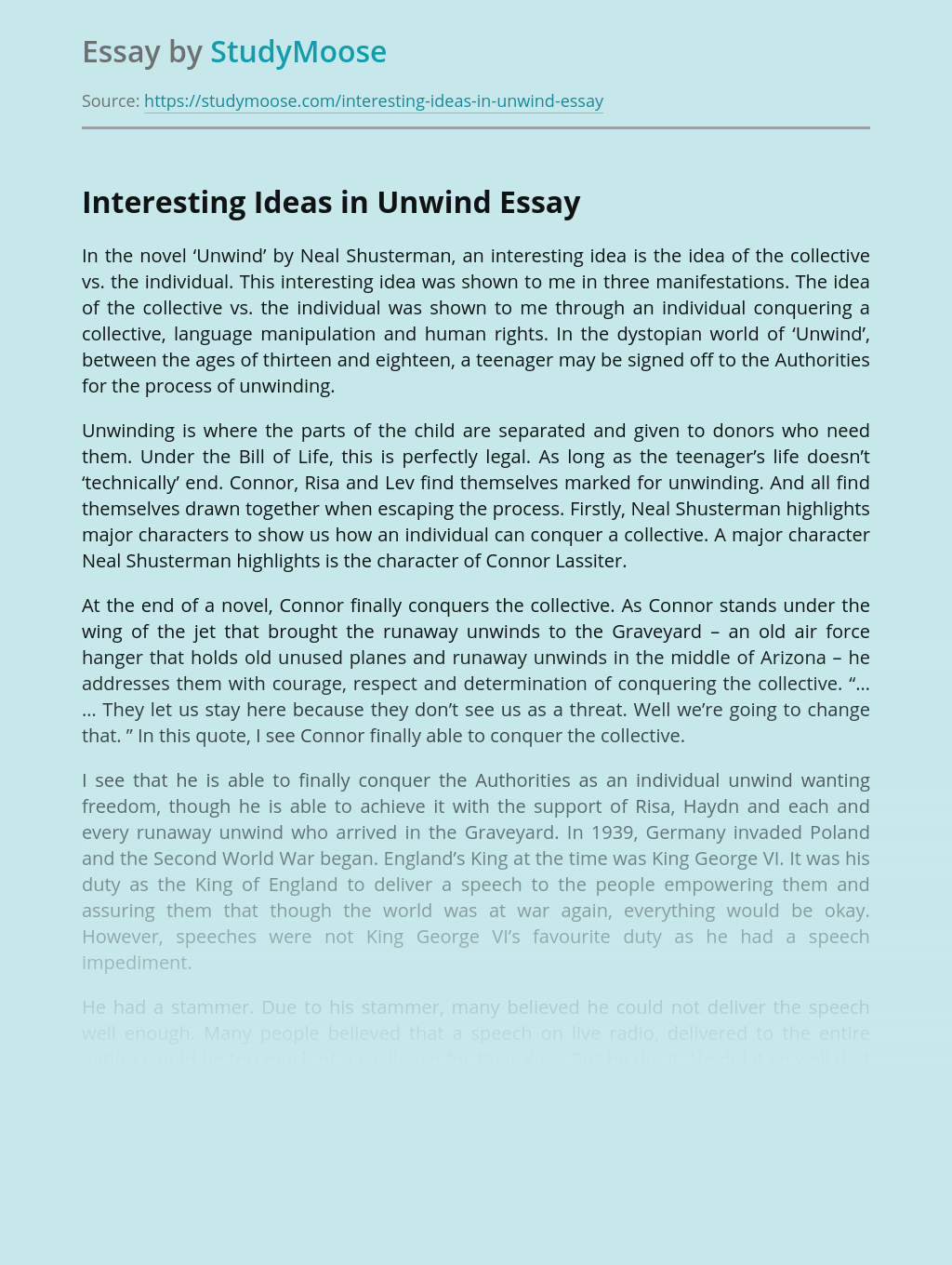 “What a fucking joke!”, that quote is what I was repeating like a mantra when reading Aravind Adiga’s novel The White Tiger. The narrator introduces that phrase at the beginning of the story and when I go through his encounters I can’t help but to say it too. This novel takes place in India and...

In Melina Marchetta’s novel, “Searching for Alibrandi”, the theme of identity is a procedure of discovery along a journey for the majority of the characters. Although John Barton’s journey is brief by the end, he understood what he wanted and he ensured that no one was injured more than required when he achieved it. Josephine...

Get Essay
The Guides of David Strorm

In the beginning of the book The Chrysalids, David Strorm was describing a dream. A marvelous dream about a city seamlessly embraced by the untainted sea set around it. On the streets ran carts without horses and in the sky flew these burnished things shaped like fish, but they weren’t birds. Such a city was...

Social activism is very important to the Chicano Culture. This can be seen throughout the Mexican-American culture, starting with the Mexican Revolution. This is where the Mexicans started a search for a new leader to bring stability to their lives. Mexicans-Americans felt like they had to choose sides. Were they Mexican or were they American?...

The Mayor of Casterbridge by Thomas Hardy

Ellen Hopkins wrote this novel about a girl who grew up in a Mormon household, and is beginning to think that this is not a lifestyle she wants for herself. With an abusive father, lazy and passive mother, and constant conflicts with the Mormon teachings and beliefs, she refuses to give in to that way...

Romance in A Walk to Remember by Nicholas Sparks

In One Hundred Years of Solitude Analysis

In One Hundred Years of Solitude, the main plotline revolves around the fictional Colombian town named Macondo, and its main inhabitants, the Buendia family. Though it is obvious to the reader that each member to the Buendia is crucially important to the novel, each visitor to Macondo also carries his or her own importance. Three...