Coco Chanel is an icon. Chanel is one of the most influential fashion designers of all time. She was one of the first women entrepreneurs of the 20th century. Chanel led the world from hoop skirts and corsets to long, loose fitting jersey dresses. She changed the way people saw the world through her innovative designs. Gabrielle was born in 1883 in Saumur, France. She was the second child born to a seamstress and a market stallholder. Her parents were not married when she was born, however they married shortly after her birth.

Don't use plagiarized sources. Get your custom essay on
“ Coco Chanel’s Career in Fashion Industry ”
Get custom paper
NEW! smart matching with writer

Chanel was the second of five children.

At age twelve, Chanel’s mother died of tuberculosis. One week later, her father abandoned her and her four siblings in search of wealth. Chanel and her two sisters, Julie and Antoinette, were put into Aubazine, a Catholic Monastery and her brothers were sent to work on a farm. She learned the trade of sewing while in Aubazine, where she spent six years.

Chanel and her sisters went to spend holidays with their relatives, where Chanel learned to sew with more flourish. When Chanel turned eighteen, she left the orphanage with her cousin Adrienne.

They moved to the town of Moulins where they took up work at a tailor’s shop. While living in Moulins, Chanel and Adrienne had a brief stint as singers in a cafe. This was where the name “Coco” developed. It is a shortened form of “coquette” which means “kept woman. ” She failed keep steady work as a singer, however she soon met Captain Arthur Edward “Boy” Capel.

Capel introduced Chanel to the fine life and with his money she opened her first shops. Some of her designs were inspired by his clothing style. Chanel was the first woman in France to start and run her own business.

In 1910, Chanel opened her second shop. Soon after, Gabrielle Dorziat, a famous actress, modeled Chanel’s hats in the play Bel Ami, and again in Les Modes. Because of Dorziat, Chanel’s empire began to bloom. She introduced her clothes that were suitable for leisure and sport, rare in the 1910’s. By 1919, Chanel had opened five shops. Chanel struck a deal with the Wertheimer brothers, directors of the eminent perfume house Bourgeois, to create a corporation called Parfumes Chanel in 1924. From this came Chanel No. 5, the first of Chanel’s extremely successful perfumes.

After disputes between Chanel and the Wertheimer brothers, Chanel worked for twenty years to remove herself from the deal. While in Monte Carlo in 1931, Chanel met Samuel Goldwyn, the American film producer and founding executive of several motion picture studios. Goldwyn offered one million dollars (approximately 75 million today) to bring her to Hollywood twice a year to design costumes for MGM stars. Chanel accepted the offer and changed the fashion style not only in France, but it America also. As Chanel’s empire expanded, Chanel changed the role of women in the world.

Chanel closed her shops during World War II saying that it was not the time for fashion. Chanel served as a nurse during the war but was later criticized for having an affair with a Nazi officer. She moved to Switzerland to escape conflict. In 1954, the self-imposed exile was over. Chanel returned to Paris and used Christian Dior’s feminine look. She expanded her signature style including pants for women. Chanel’s new collection was not as popular in Europe; however, it was a huge hit in the United States. Famous stars like Audrey Hepburn and Grace Kelly wore Chanel’s clothes. Chanel worked until her death in 1971 at the age of 88.

She never married which was extremely rare of women at her time. When asked why she did not marry the Duke of Westminster she responded “There have been several Duchesses of Westminster. There is only one Chanel. ” Chanel rose from poverty to create her fashion empire. She showed that women could be influential outside of the home. She changed the way people viewed the world that they were all the same person. Chanel said “In order to be irreplaceable, one must always be different. ” Chanel showed that there was nothing wrong with being an individual and that, women especially, should be something great. 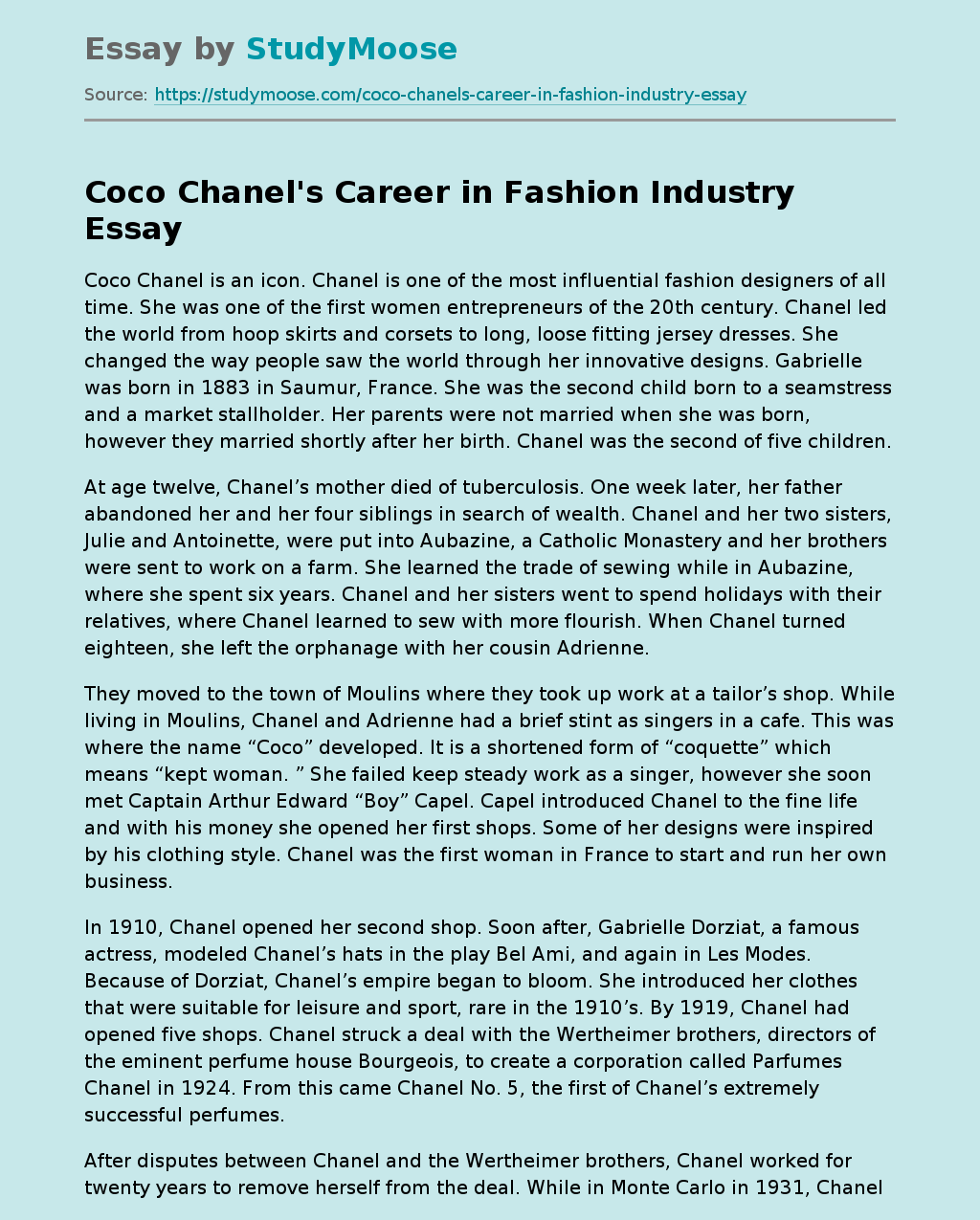