There may just be a glimpse of good news for the music front. Recently I’ve heard numerous television commercials using pieces of classical music to display the message. Two of them, it must be stated, were for the same product, one of those so called daily vitamins. One had a piece of Wagner – the theme from Die Walkure – and the other accented a melody from Mozart’s Die Zauberflote. Actual operas, please note. And then another commercial for a table seasoning, set in a restaurant, had Bach’s BrandenBurg Concerto No.

Don't use plagiarized sources. Get your custom essay on
“ Classical Music in Pop Culture ”
Get custom paper
NEW! smart matching with writer

playing in the background. Could it be that a couple of advertising people have determined that pop music has lost some of its demand? I am lost in how these people go about determining what music to use, but it seems luminous that they would want whatever they choose to support the product image and not defer the people to whom they are trying to sell it. Yes, it is entirely possible to use music sarcastically , and perhaps that’s what is going on here.

But to use a piece of Mozart sarcastically is still to expose the audience to a piece of Mozart, which in the normal way of things they may not encounter nywhere else. It’s hard to see how good this is but it can’t be that bad. Except for a single double sided cassette of Beethoven(which I accidently taped over one day) there was no classical music in the house when I was coming up.

Whatever of that type of music I heard, I heard from television. And by “television” I don’t mean the likes of “Matlock. ” No, my earliest introduction to music of the serious sort was from the soundtrack of cartoons. The animation studios of Walt Disney and Warner Brothers, among others drew freely on the library of fine music as background and sometimes even as foreground, as for xample when Bugs Bunny or Elmer Fudd appeared as the conductor of a symphony orchestra. Even when Bugs was the subversive rather than the highbrow, the music came through. I didn’t hear too much in school, either which is a shame.

As I recollect the musical interludes in school consisted of taking out little books of songs and singing “Jack and Jill” and other similar songs. Some kids played in the band and soaked up some music that way; being the class clown and lack of interest at the time, rendered me unfit for that path. But eventually I grew an interest in the drums and arching music, and started watching DCI(Drum Corps International), videos on YouTube. Doesn’t it seem, though, that good music is something that might be included into the school day? It does not have to be studied academically or formally “appreciated. ” Just made available, as one might play little league football. Start early enough, and maybe boys won’t pretend to be sick at the sound of a violin. I’ve seen a couple of new commercials and they do succeed in making me take notice. I’m not going to buy those vitamin or the table seasonings, but I hope those who are inclined to do so will form a ositive association with some good music.

Researchers at the college nursing program at Kaohsiung Medical University conducted a study in which they randomly assigned a group of women to classical music group and another to a country music group. “the classical music group showed significant reductions in stress, anxiety, and depression after just two weeks, using three established measurement scales”(Chung-Hey). Followed by “in comparison, the country music group showed a much smaller reduction in stress while there anxiety and depression scores showed little or no improvement. 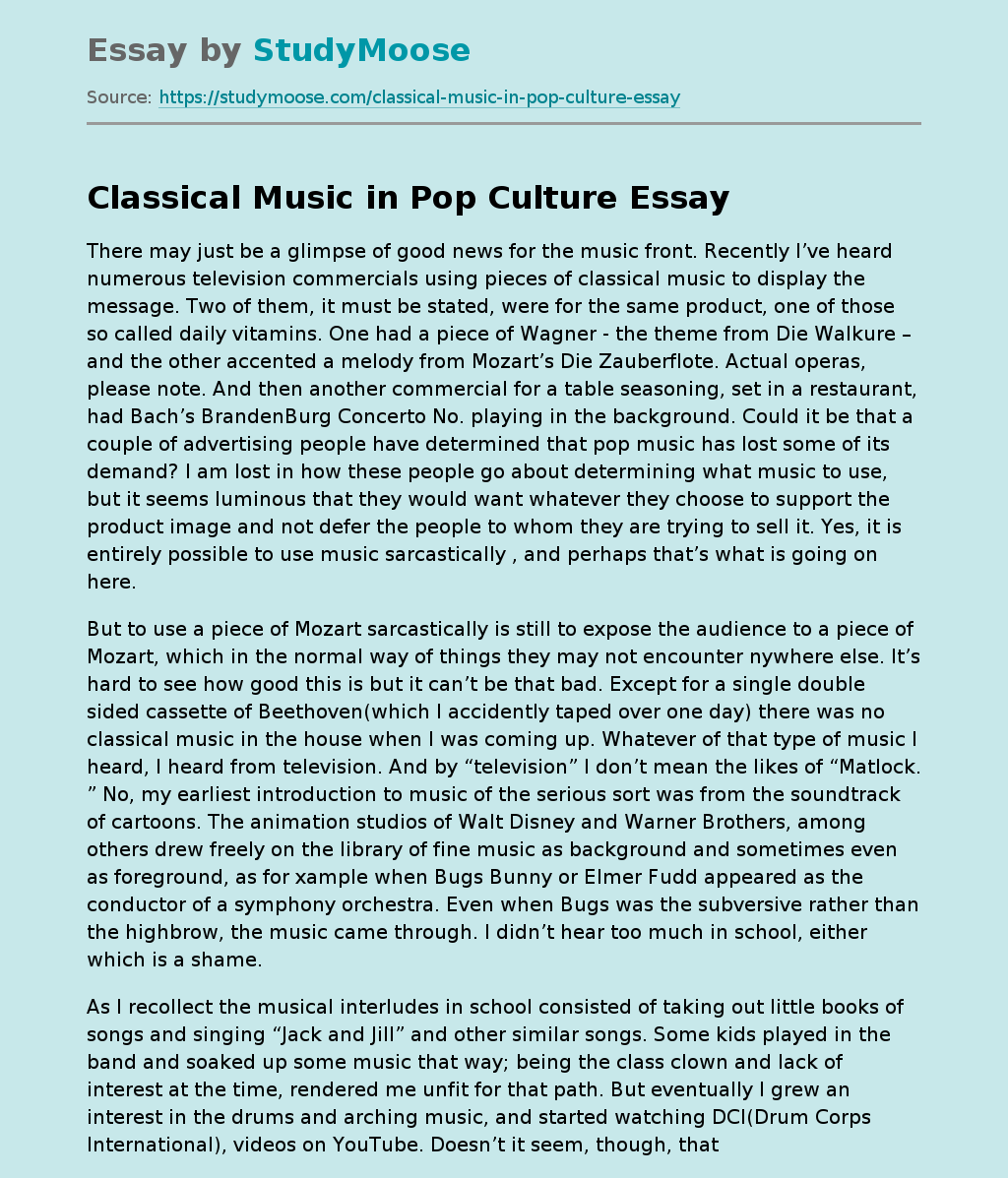