Impact of Globalization on Pop Culture

To most people out there who do not speak Korean, ” Gangnam Style…Yay,sexy lady…oh.oh.oh.” is basically the only words out of all lines that they can understand in the song Gangnam Style by Psy. However, this Korean song somehow has turned out to be a viral popular pop song even to non-Korean speakers with little understanding of what the lyrics mean. Apparently, Asian singers are gaining popularity around the globe and their appeal is no longer limited to Asian audiences only.

Turn in your highest-quality paper
Get a qualified writer to help you with
“ Impact of Globalization on Pop Culture ”
Get high-quality paper
NEW! AI matching with writer

Singers apart, movie stars are also gaining a place in the Western countries–Jackie Chan, Bruce Lee, Li Gong and Jet Li to name but a few. Generally speaking, technological advancement, trend of Asian cultures and change in music type are the major reasons why the stars from the East can survive and thrive in the West, where there is a cut-throat showbiz market. Technologically speaking, advancement in this aspect extenuates the significance of geographic restrictions.

In the past, with fewer choices yet higher cost of transportations, it was nearly impossible to travel a long distance to different lands. In this regard, convenient transportation at present allows Asian artists to fly to Western countries for promotion with ease.

What is also noteworthy is that the emergence of the Internet forms a platform where films and music videos can be shared from one place to the other side of the world in just a blink of an eye. Given the ever-evolving technology, it comes as no surprise that people in the West are exposed to and provided with countless Asian movies and songs through promotion in both the actual world and the digital one.

Truth be told, who does not like refreshingly new things? That Asian songs and movies are right up their alley in terms of refreshingness is very likely. Culturally speaking, the rise in popularity of Asian culture in various aspects leads to more attention paid to Asian actors. Under the influence of globalization, cultures are passed from countries to countries. The most noticeable change or what I would call the trend is that people from the West have a great inclination for the cultures in Asia. For example, Kung Fu was introduced to the US and is now the type of exercise many Americans try to and like to learn; cheongsam has become a type of formal clothing for Westerners and has stirred up a new retrograde fashion. With more people showing interest in Asian cultures, more focus is put onto the people who exhibit them, the Asian actors.

Moreover, many Hollywood film producers are riding on this Asian culture craze and make a lucrative business by incorporating Asian features into their new movies. For a case in point, the Karate Kid, although namely Karate, is Kung-Fu-themed and it makes a great box office. In other words, more chances are given to Asian actors to appear on world-class movies. Without a doubt, there is a subtle but solid correlation between the trend of Asian cultures and the rising popularity of Asian movie stars. Probably out of the need to adapt to a new place and a new kind of customers? Asian singers from time to time have made songs in English that are comprehendible to most people who speak this international language. In this way, with more understanding about the meaning of the lyrics, Western people can more easily recognize the talent of Asian singers and in turn more easily idolize them, or at least this could be the case for those who define good songs as the ones with a deep meaning.

For others that do not seek a lesson from listening to songs, the fast rhythms and beats of some Asian songs can be a reason good enough for them to admire Asian singers. As aforementioned, Psy is now a sensation worldwide even though he sings in Korean. Music is a universal “language” everyone understands. While some people nowadays still insist on the importance of having an introspective message in a song for it to be good, some define good songs as those with catchy beats. Given the fact that some Asian singers are making songs in English or with exciting rhythm and beats, it is not hard to explain why they can get so popular in the West. In conclusion, the phenomenon of stars from the East gaining popuplarity in the West can be explained by technology advancement, trending Asian cultures and change in music type. By far, it is still a healthy phenomenon, but everything is a double-edged sword. Will this bring about any problems in the future? Only time could tell.

Impact of Globalization on Pop Culture. (2016, May 12). Retrieved from https://studymoose.com/impact-of-globalization-on-pop-culture-essay 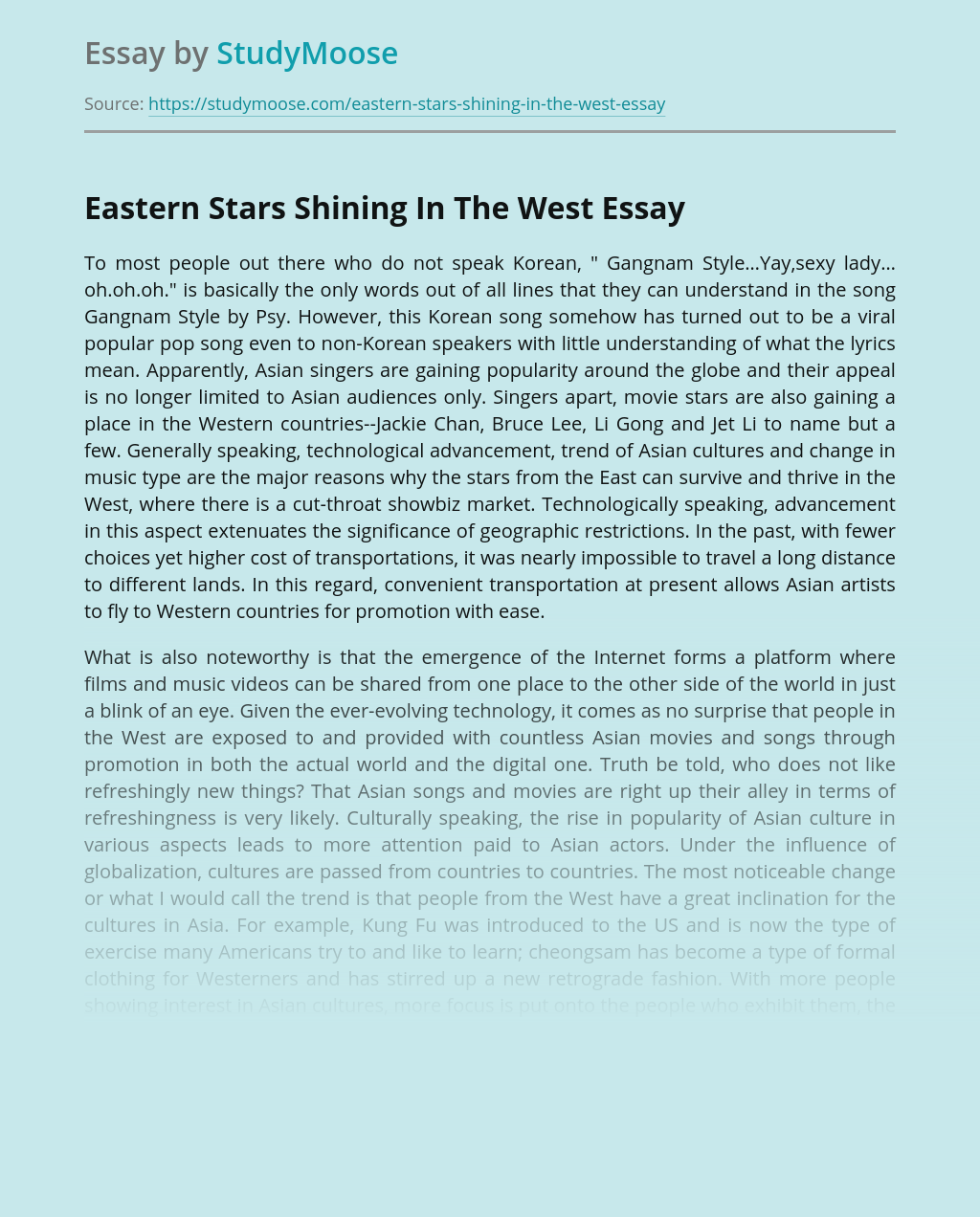 Turn in your highest-quality paper
Get a qualified writer to help you with
“ Impact of Globalization on Pop Culture ”
Get high-quality paper
Helping students since 2015
Stay Safe, Stay Original