Classes in Society in "To Kill a Mockingbird"

David Suzuki once said, “our choices at all levels-individual, community, corporate and government affect nature. And they affect us.” The story of To Kill a Mockingbird written by Harper Lee talks about three kids who experience the ‘real world’ in Maycomb, Alabama. Jem, Dill, and Scout have their blissfully ignorant perspectives challenged, destroyed, and developed as a result of the various tragedies witnessed throughout their childhood in Maycomb County. Jem and Scout have their perspective on class in society challenged due to the dreadful fire at Miss Maudie’s house.

Don't use plagiarized sources. Get your custom essay on
“ Classes in Society in “To Kill a Mockingbird” ”
Get custom paper
NEW! smart matching with writer

Boo Radley, a man who was seen as a ‘monster’ by the people of Maycomb, helped along with the others attempting to help Miss Maudie. After the fire Jem had told Atticus that he “saw him, he was tuggin’ [a] mattress” (Lee, 95). With all the rumours and names the people of Maycomb had talked about Boo Radley, he still attempts to save Miss Maudie’s furniture which creates a realization for Scout and Jem.

They gather a new frame of mind on respect towards others and that they should show class towards others, even when treated poorly. The unity in the community during this tragedy also develops their mindset on class in the community. Jem and Scout have seen that “the old fire truck, killed by the cold, was being pushed from the town by a crowd of men” (92). This not only portrays a view on gender roles, but it also gives Jem and Scout a sense of thought that in order to succeed, people need to work together.

Without these men who were expected to do heavy duty jobs back then working together, the fire would have spread to the other houses around Miss Maudie and carry around the neighbourhood. Finally, by this house in flames, the exclusion in differences and coming together is realized. It “[looked] like all of Maycomb was out [that night], in one way or another” (95). Jem and Scout see that apart from the difference in ethics and values one may have such as mental health, gestures of respect should still be shown towards them. Due to these events of community unity seen by the Finch children, their outlook on ethics, especially class in society challenges and eventually develops their perspective the way they feel others should be treated.

During the case of African American, Tom Robinson is underway. Jem, Dill, and Scout witness a challenge to their perspective on race, mental illness, and class in society. On the court date of Tom Robinson’s case, Mr. Gilmer, Mayella Ewell’s attorney, shows disrespect towards Tom throughout his questioning. Mr. Gilmer had “called him ‘boy’ all the time an’ sneered at him, an’ looked around at the jury every time he answered” (226). This event develops Dill, Jem, and Scout’s perspective on racism towards African Americans. They witness a personal experience that shows them that African Americans will still be seen as “low” compared to Caucasian Americans. It leaves their own perspective challenged due to the opinion of the majority of people in Maycomb. The Finch children and Dill also have their view on mental illness partly destroyed throughout this case. The children find out that there were others in Maycomb who were rooting for Mr. Robinson including Judge Taylor. After witnessing Tom Robinson stated as guilty with a poor sense of proof provided by Mr. Gilmer, they realize that peer pressure by the majority may affect a person’s actions such as Judge Taylor naming Tom guilty due to the majority group siding with the Ewell family. Towards the end, the children have their perspectives challenged by the statement of Atticus. According to Atticus “some [African Americans] lie, some [African Americans] are immoral, some [African American] men are not to be trusted around women-black or white”. (273) These statements make Jem, Dill, and Scout thinks and sees the truth in that some African Americans lie as well as them being the minority in their opinion but that this truth applies to all of the human race, not just one particular race of men and women. Throughout this case, Jem, Dill, and Scout are continuously developing and facing challenges on certain views they have on race and mental issues caused by the pressure and stereotypes created by the community.

The gossip whispered around Maycomb County develops and eventually destroys Scout and Jem’s perspective on Boo Radley and his mental health. The children’s outlook on Boo Radley is thought over after his kind gesture. When Scout realizes she has got a blanket around her, she is told that it was “Boo Radley. [She was] so busy looking at the fire [she] didn’t know it when he put the blanket around [her]” (96). This is the beginning of the realization Jem and Scout have on Boo Radley. They see that Boo Radley is not as horrible as everyone makes him seem and that he may contain mental issues which cause him to struggle to show his kindness. The gossip around Maycomb genuinely challenges the way Jem and Scout saw Mr. Radley. During Scout’s conversation with Miss. Maudie, Scout finds out that Boo had supposedly stabbed his father and is a lunatic. When Scout tells Jem and Dill about this incident, it challenges them to view Boo Radley as a heartwarming man since they always have a doubt that Boo Radley may hurt him. Boo Radley causes Jem and Scout to finally see Boo Radley for who he is when attacked by Mr. Ewell. On Jem and Scouts way back home from the school pageant, a man, Bob Ewell, chases them while carrying a knife attempting to hurt them. Scout then sees a dark figure, Boo Radley, grab Bob Ewell and eventually put a knife in his ribs. This leaves a final thought that helps Jem and Scout to see Boo’s mental issues differently and how he tries to be a good Samaritan to the best of his ability with this difficult issue. Jem and Scout have their views on Boo Radley challenged by the rumours said but eventually switch their perspective and see him as a man who attempts to do the right thing.

To conclude, the unity in their community they witness on the day of the fire, the discrimination towards Tom Robinson, and the attempts of kindness shown by Boo Radley help the children seeing issues and people from a different perspective. The perspectives that Jem, Dill, and Scout have on Boo Radley, racism, societal class, and mental issues are continuously challenged and developed. All in all, Jem, Dill, and Scout have grown up with ethics and values of the majority of white people in Maycomb; but have outgrown with their frame of mind more developed, perspectives challenged and destroyed.

Classes in Society in "To Kill a Mockingbird". (2021, Feb 18). Retrieved from https://studymoose.com/classes-in-society-in-to-kill-a-mockingbird-essay 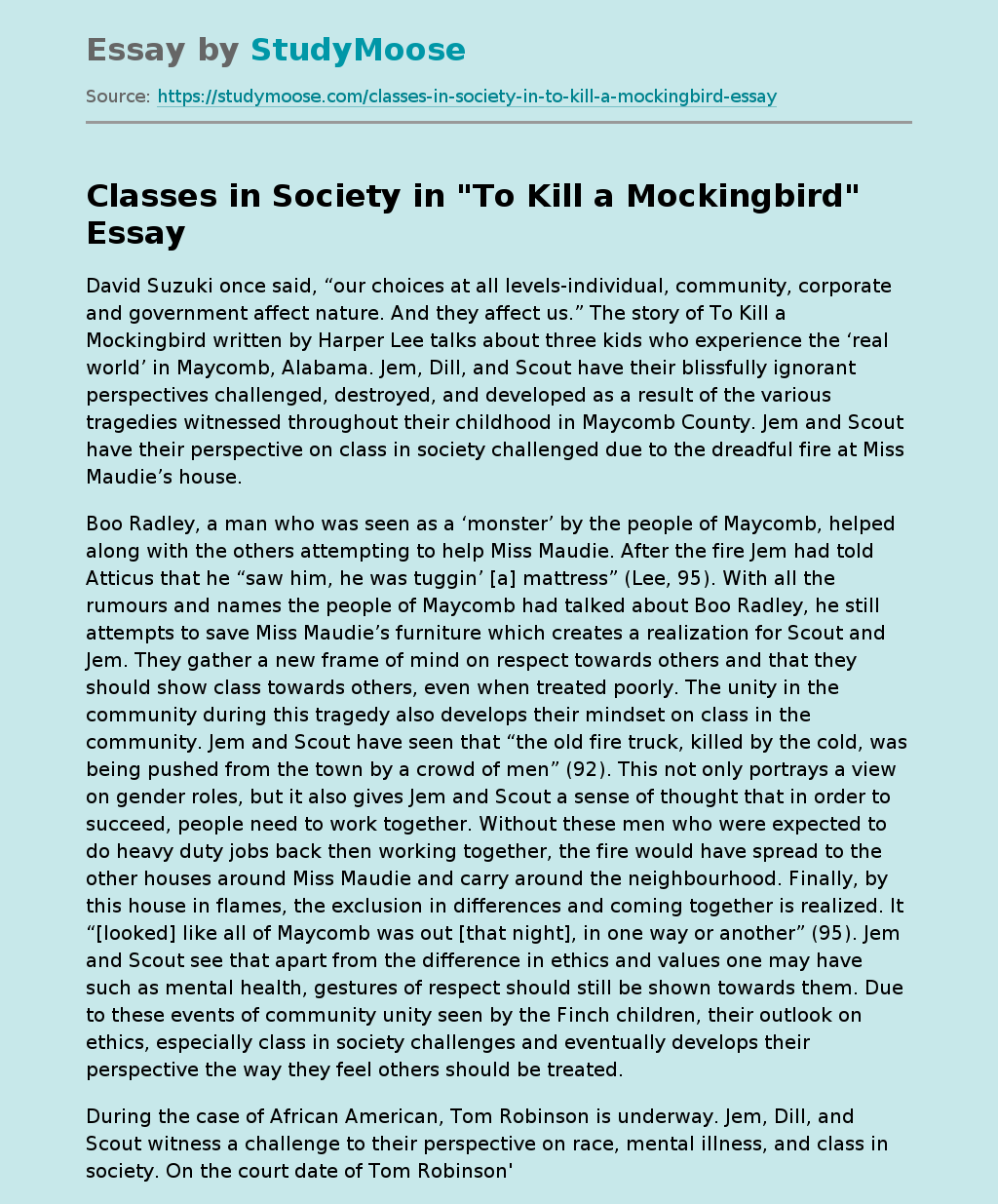