This interesting novel portrays the stories of 8 women, 4 daughters and their mothers. They are separated not only by the generational barrier, but also by a much more powerful one, the barrier of cultures. The daughters are all Chinese-American, having adopted traits of both cultures, yet leaning towards the American part of the spectrum due to the fact that their only access to Chinese culture comes through family, and not being within the context of an environment propitious to the development of the standards of this culture they fail to absorb or learn the importance of seemingly useless or baseless lessons.

Don't use plagiarized sources. Get your custom essay on
“ “The Joy Luck Club” novel ”
Get custom paper
NEW! smart matching with writer

The book serves to unify the cultures within one framework, to give meaning to both and clarify conflicts that may arise; it is a bridge much like the “main” character Jing-Mei Woo. When first looking at the book the title is important to note, here the reader notices a superposition of ideas. Joy and luck, though applicable together are not commonly associated instantaneously.

This uncommon combination of concepts creates a slight urge to understand why this “club” is both of luck and joy. Luck can bring joy, yes, yet the reason for this association is not apparent when reading only the title.

As the story unfolds the reader gains the knowledge that in Chinese Joyluck is single word which conveys both concepts, or rather is a word for both, this is to say that the word transmits the concepts not as joy and luck, but instead a concept of its own joining both into one and the same.

This clash of meanings is pivotal for one of the recurring themes throughout the book, the untranslatable nature of culture. Certain elements of a culture cannot be understood outside the concept of this culture, it is a self-contained entity out of which only a dimmed, broken shadow of the former self is observable.

Language is often a pivotal element in cultures for though words may have a counterpart in another the underlying meanings, associations and undertones of a word will not be accurately transmitted. This difference of context and subtleties of meaning grows further and further as the cultures vary, Chinese and American cultures come from greatly different histories and cultural origins hence causing conflicts and loss of cultural elements when the two mesh. Essentially this conflict pervades the entire book throughout its entirety, it is the basis for the majority of the sub stories within the structure of the book.

Even if some of the mother’s stories take place within only one cultural backdrop, the Chinese, they serve to set the principles and culture “unblemished” by the American, to serve as a basis for comparison and a rationalization for the mother’s apparently baseless actions. This is evidenced by the way Lindo Jong goes through the excruciating, for both her and her mother, experience of being given to Tyan-Yu as a wife. In this tale Lindo does not become angry at her mother, but instead feels her pain. As her mother tells her, “It’s no use… We have made a contract. It cannot be broken.”

This reference along with “My mother did not treat me as she did because she didn’t love me. She would say this [“Look how much Huang Taitai’s daughter can eat”] biting back her tongue, so she wouldn’t wish for something that was no longer hers. ” Here the reader observes that Lindo and her mother are both sad yet believe in the sacrifice of the daughters for their mothers. They both accept fate, are bound by the word of a preordained marriage. Here there is a sharp contrast with the daughter’s, Waverly’s, views on the value of a promise. 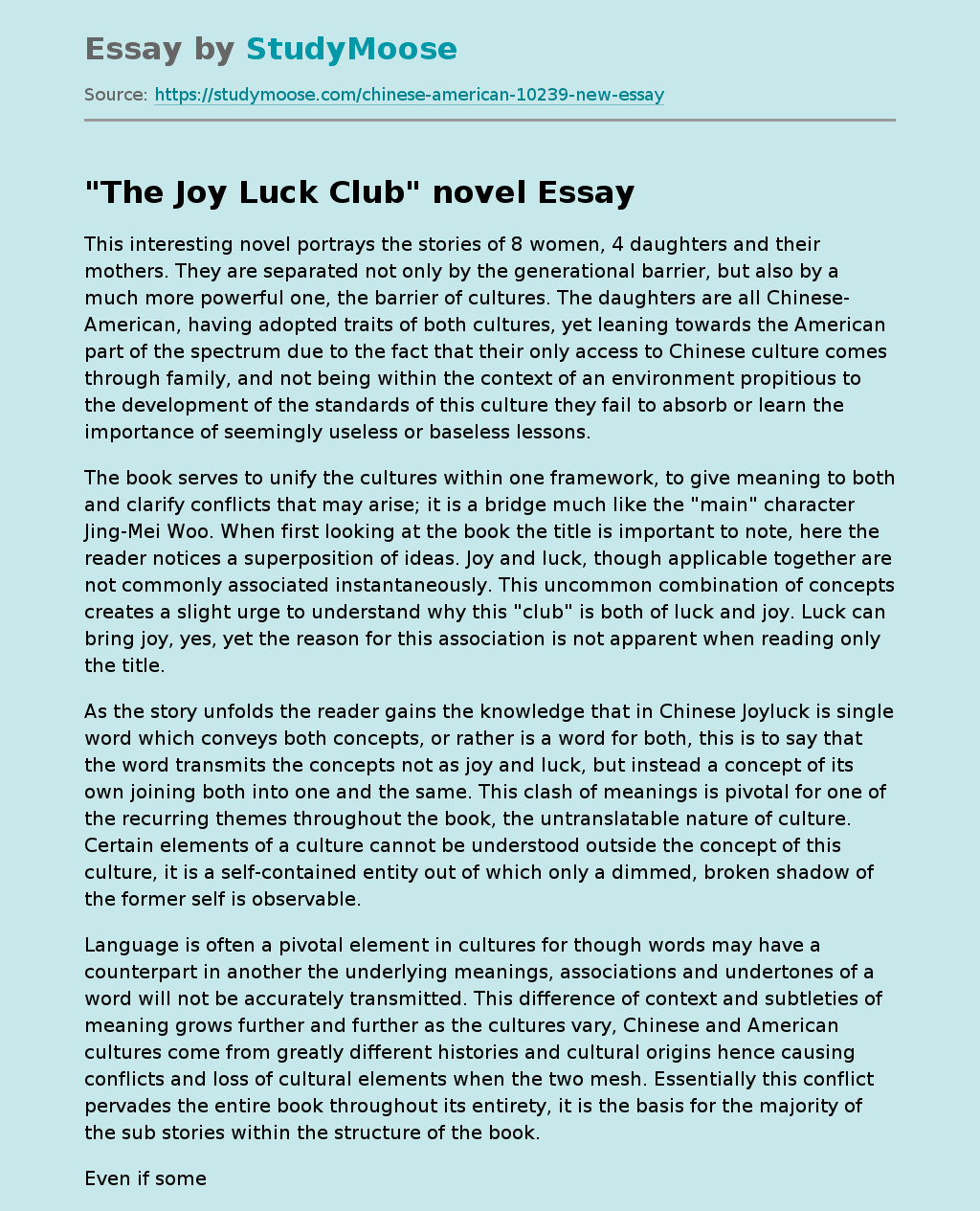