Laurie creates an alter ego named “Charles” and uses him to take all the flaws that Laurie has in kindergarten.

The underlying message, central idea, or moral discussed in a story.

The story teaches us that something can be going on and we may not even notice it. The mother refuses to look at what is right under her nose, for trepidation of realizing something that she doesn’t want to see- her dear, naïve little boy causing serious trouble.

Don't use plagiarized sources.
Get Your Custom Essay on “Charles” by Shirley Jackson Analysis Just from $13,9/Page

She adored listening to the stories her son would tell her about “Charles”. In fact, she couldn’t wait for Laurie to get home from school so she could hear them. All the while Laurie was misbehaving at home. Instead, she would relatively think that it is another little boy named Charles. Another minor theme can be: if you lie then you will in time get caught red-handed.

“The teacher spanked a boy, though … For being fresh” (pg 8) was Laurie’s replay to his mother asking him what happened in school.

When I reread this I thought that this was where Laurie decided to put on his act. Another foreshadowing example was the unusual way Laurie kept on taking about “Charles”. Another observation I made was about Laurie’s behavior. His mother also notes changes in his behavior: he no longer waves goodbye to her, slams the door when he comes home and speaks insolently to his father. Since they adore their son, his parents believe all he has to say, and this belief stops them from seeing that what he says is not the full truth.

When the mother discovers at the end of the story that there is no child named Charles in the class and that it is Laurie who has had trouble bending into kindergarten and has done all the bad things he credited to Charles, the reader no less than the mother is surprised. The mother’s reaction would be quite embarrassed since she is the mother of ‘Charles’.

Laurie creates a double of him to do “bad” so that he might stay good in the eyes of his parents. Loving but narrow-minded, the parents do not get involved. I think after realizing that Charles is indeed Laurie, this might affect the way his parents treat him from now on. Not only that, but I think their attitude towards their own unobservant behavior might change as well.

This story made me think of when I was younger and the kids who acted this way to get attention from their parents. This story shows the ways children invent shadow figures as a means of confronting problematic feelings while forming their identities. I know that a lot of young children are clever enough to do a lot of things, and some times they go unnoticed, like Laurie’s travesty. In Laurie’s example mentioning Charles so much, the family’s bound to make Charlie a part of daily conversation. Why was Laurie hinting to his parents instead of coming right out and telling them? Was it because he wants his parents to shape it out on their own little heads? I too indeed might’ve lied a couple of times as of way of being included and known. Although my parents were observant and I was quick to learn that it’s not good to lie.

Verbal irony – contrast between what is said and what is meant. In other words, sarcasm.

Dramatic irony –between what the character thinks to be true and what we (the reader) know to be true. For example: In City Lights the audience knows that Charlie Chaplin’s character is not a millionaire, but the blind flower girl (Virginia Cherrill) is unaware and believes he’s rich.

Situational irony – a certain fact is perhaps highlighted by an event that is in contrast to that fact. For example: An old man turned ninety-eight. He won the lottery and died the next day.

The point at which we the readers realize that Laurie is tricking his parents and from then on we also know— or suspect — more than the narrator about his misbehaving and amused the mothers lack of observance is an example of dramatic irony. Parents, by definition are thought to be mentally advanced than their children (when they are at such a young age such as Laurie) but are outsmarted by the imagination and creativity of a clever little nipper. 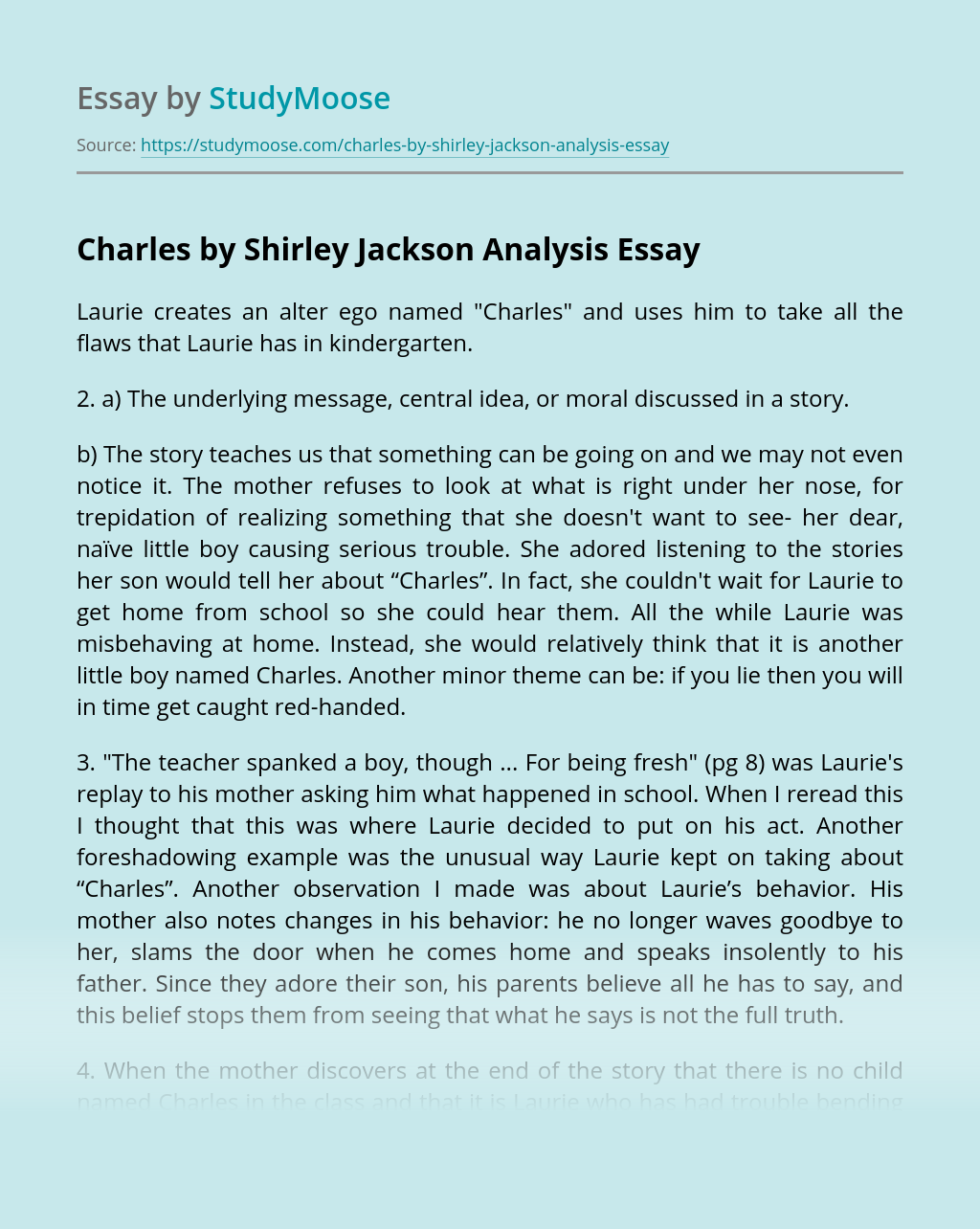 Summary of Tuesdays with Morrie Major Characters Morrie Schwartz – The novel is centered around him; Morrie is Mitch’s previous college teacher who was identified with ALS (Lou Gherig’s disease); he satisfies with Mitch in his home every Tuesday to teach him about the meaning of life. Mitch Albom- Morrie’s former trainee; he has since...

Shakespeare wrote Macbeth in the 16th century as tribute to king James the first. At the start of the text king Duncan made me believe that anyone could be a good leader, Duncan effectively portrayed this idea because he put the needs of his country in front of his own. Throughout the text Shakespeare influenced...

Abstract A parenting style is a method or type of parenting which directly and indirectly influences the development of the child. Developmental psychologists study the physical, cognitive, social, intellectual, perceptual, emotional and personality growth and development that occurs throughout a lifetime. The purpose of this research was to identify how specific parenting styles positively and...

Social Stratification and The Great Gatsby

No matter which facet we view society from we have always been divided by social class. Whether it is wealth, power, or family, the majority of people cannot seem to resist having a prejudice against individuals belonging to a different social class because of one of these aspects. Since the beginning of civilization society has...