Characters of “To Kill A Mockingbird”

The author of the very well-known novel, “To Kill A Mockingbird” is named Harper Lee. Lee wrote the novel in 1959 and published it in 1960; she later wrote a follow-up novel, “Go Set A Watchmen” telling where the Finch family stands years later. Lee was born on April 28, 1926 and was born and raised in Monroeville, Alabama. Her love for English literature began in her high school years and played out through college after graduating high school in 1994. Harper Lee died many years after her successes at the age of 89 on February 19, 2016.

Don't use plagiarized sources. Get your custom essay on
“ Characters of “To Kill A Mockingbird” ”
Get custom paper
NEW! smart matching with writer

“To Kill A Mockingbird” sets wayback in the late 1920’s to early 1930’s during the Great Depression. The setting and location of this novel takes place in a small fictional town called Maycomb, Alabama. Everybody in the small town of Maycomb knows just about everybody and the distance between all the markets, jail, tribune, etc. is just about the same walking distance for everybody unless you’re up the county a little more than others.

The town separates the colored people from the white as that is how it was back then. The town is basically divided into a colored part of town and a white part of town, where the colored folks work as slaves for the white folks.

Atticus, Jem and Scout’s father changes to be a better man and better father than what he already was. He learns as his children are growing up that they are in fact good children and have actually learned from his lessons.

He tends to loosen up on them and know that they are responsible enough to not make silly decisions that’ll end up hurting them in the future. I think it makes his character more admirable than what it was before. Atticus’s internal conflict would have to be his debate on whether he should or shouldn’t defend Tom Robinson in court. His external conflict would have to be the disagreements from the people of Maycomb and the way their opinions affect his children. Atticus ends up learning to trust his children a little more. Atticus’s FOIL character is his sister, Aunt Alexandra. While Atticus lets loose with not only his children, but others as well; his sister is more uptight and sticks to the rules and books, and she shows it. ‘I can’t say I approve of everything he does, Maudie, but he’s my brother, and I just want to know when this will ever end.’ (24)

Scout, the baby of the Finch family, changes by getting getting a lot more mature, and having perspective changes. She also learns more lessons and manners form others she may not have noticed until later just by growing throughout the story. I think of Scout the same because I’ve always seen her as a tough one and the way she changes does not in fact change my thoughts on her..The only internal conflict Scout has with herself is at the Radley tree where she found the gum. At first she was afraid to eat it from poisoning, but eventually ate the gum anyway. An external conflict scout encounters is when she was explaining history of other children to her teacher. Her teacher did not agree with the way she was acting and therefore it led to the beating of Walter Cunningham produced by Scout. Scout learned how to be mature and a respectful girl without even realizing it as she grows. The FOIL character of Scout is her cousin, Francis Hancock. If scout were to say to do something, Francis would not. If she were to say not to, he would just to spite her. “He was the most boring child I ever met.” (9)

Jem, the eldest son in the Finch family changes throughout the story by growing from a boy to a man. He also learns to stand his ground and get more confident in himself and his decisions to get a point across. His changes make him more interesting to me because of the fact that he was this immature little kid and then out of nowhere he becomes a man who’s too old for nonsense and silly games. An internal conflict for Jem is with himself, basically becoming and growing into a man. He’s growing apart from his sister. A major external conflict for Jem is Bob Ewell. Jem had to show true courage while trying to escape him and his sister out of a life or death situation against Bob. A moral Jem learned about at the end was of the word courage. He used courage to get through so many obstacles throughout the book and showed his biggest point of courage at the end. Jem’s FOIL character is Mrs. Henry Lafayette Dubose. Whenever Jem would pass her house, they’d always get in fights and go back and forth at each other; they have different views on many things. “He did not begin to calm down until he had cut the tops off every camellia bush Mrs. Dubose owned…” (11) Mrs. Dubose made Jem so angry at times he forgot about acting like a gentleman to a lady.

Boo Radley, the mysterious next door neighbor to the Finch’s starts to get out of his house more still without being seen throughout the story. He gets more comfortable in being around the children (Scout, Jem, Dill). These changes made me think of him as a bigger and stronger person because of how quick he became comfortable in himself and the children. An internal conflict with Boo was even just to step out of the house. In the end he chose to eventually do so. An external conflict was with the children because of how much they bugged him and invaded his life. I don’t think anything was taught to Boo Radley by the end of the book. The FOIL character of Boo is his brother. Although the book doesn’t show much banter between them and much differences, it does give us hints at how different they are. For ex.) Boo would put presents near the Finch’s tree almost everyday and Nathan Radley came and out cement in the hole the presents would go in. “-did you put cement in that hole in that tree down yonder?” “”Yes,” he said. “”I filled it up.”” (7) Nathan would rather stay to themselves while Boo would rather come out of their shell.

Characters of “To Kill A Mockingbird”. (2021, Sep 14). Retrieved from https://studymoose.com/characters-of-to-kill-a-mockingbird-essay 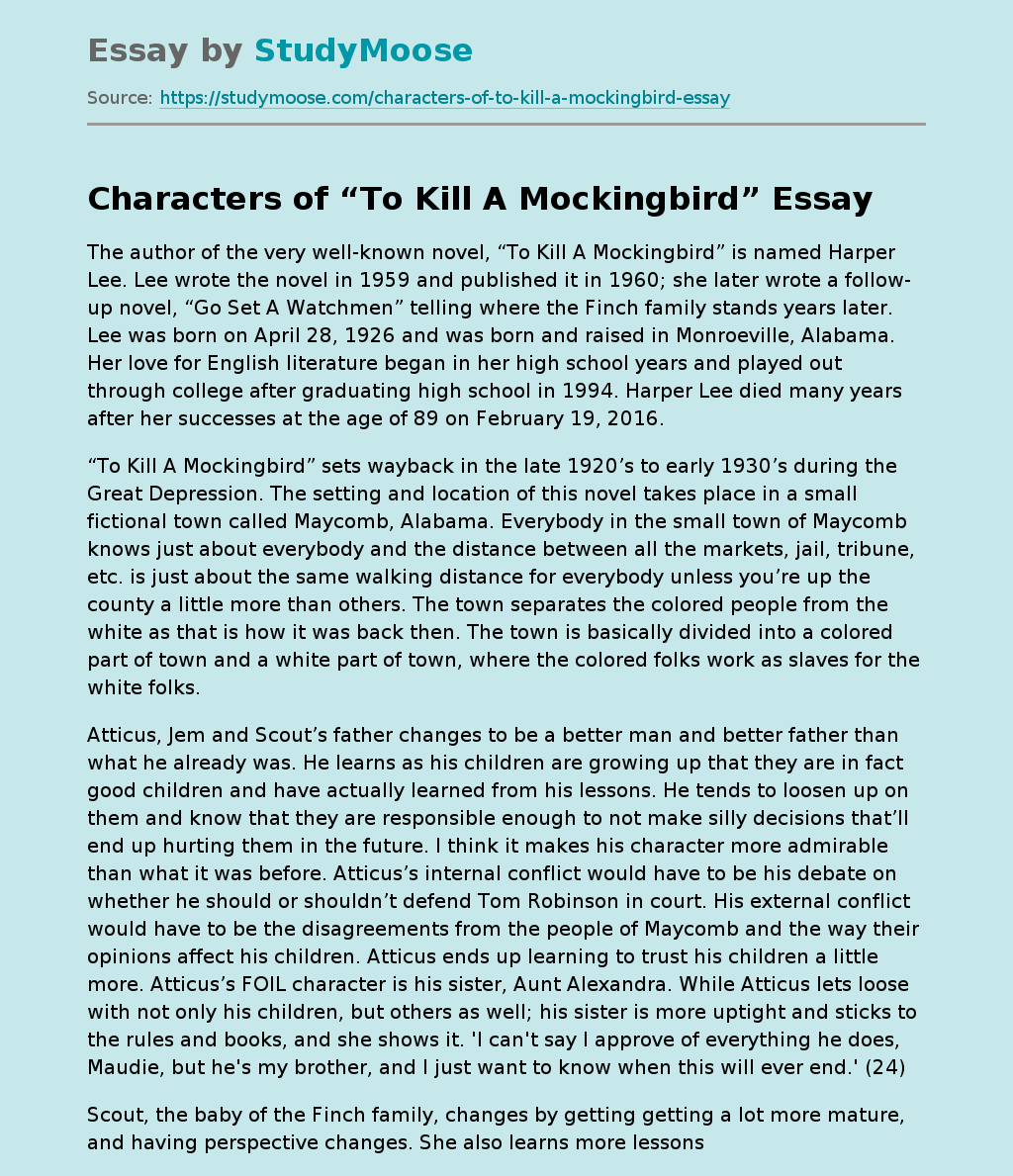