For this character bible study I will be Studying is Joseph

Joseph was one of eleven brothers.

He was the most loved son and received a coat of many colors. Due to the jealously of his brothers Joseph was sold into slavery and found himself in Egypt. God was with Joseph and Joseph even became an important person in Potiphar’s house that was until Potiphar’s wife lied and said Joseph tried to seduce her. Joseph was then thrown into jail, but he remained faithful and trusted in God. Joseph through God could interpret dreams and as a result Potiphar released him from jail because he interpreted a dream Potiphar had.

His interpretations led to Egypt prospering in a time of famine.

What made Joseph the favorite son? Joseph is the first born of Rachel and his dreams and interpretations give him a connection to God. Through God Joseph can interpret dreams and it is seen as a heavenly gift.

What was so significant about Joseph being thrown into jail? Joseph could have easily pleaded his case instead he trusted God would work it out. It was through his time in jail that he interpreted dreams and in doing so even interpreted the Pharaoh’s dream, aiding in the abundance of food during the famine. This shows people that even when life is at its worst God will provide if you have been faithful to him.

What did Joseph become? Joseph was merely a brother with a divine gift. Jealously of the brothers led to Joseph become an important person in Egypt. Joseph is an interpreter and it was through his interpretations from God that he became so valuable to Potiphar. Joseph could’ve used that power to get back at his brothers instead he used it to help them.

Joseph grew up in Israel with Jacob his father. In Israel there was a conflict between Joseph and his brothers. This led to Joseph being in Egypt amongst Potiphar and his wife. Joseph became an important person in Egypt and even saw his brothers that didn’t recognize him come through Egypt. After discovering his father was alive and he had a younger brother Benjamin he left to see them. Joseph had two sons and at 110 years dies and was buried in Shechem.

The events of Joseph took place during a famine. This famine affected many lands and Egypt prospered because of the precautions taken from Potiphar’s dream interpretation.

Three why questions that are answered through the life of Joseph are why can joseph interpret dreams. In Genesis 41:16 Joseph clearly states that it is through God that he can interpret dreams. Why was Joseph the favorite in his father’s eyes? Joseph was the first born of Rachel. Genesis 37:3 he was the son in Jacobs old age and was gifted with a coat of many colors. He could interpret dreams which is a divine gift that his brothers were jealous of. Lastly why did Joseph become an overseer of Potiphar’s house? Joseph found grace in Potiphar’s sight. Potiphar saw that the Lord was with Joseph all that he did would prosper. Genesis 39:4-5. Even When Joseph was in jail, he continued to trust God and was doubly blessed when he interpreted Potiphar’s dream.

Potiphar trusted Joseph completely and even when he was accused Joseph did not give in. Genesis 39:19-20. Integrity is doing the right thing even when no one is watching. Joseph knew that was Potiphar’s wife no one was looking, and he could’ve easily gotten away with it, but instead stayed true. This amount of integrity is a valuable piece of wisdom.

Genesis 39:3 this verse clearly states that things will prosper in the hands of Joseph. Josephs true prosperity is not in wealth but through God’s favor. Joseph had everything physically taken away, but Joseph still had God. through God Joseph was able to do great things and prosper in the Lord.

Through God Joseph can interpret dreams and this divine gift allows for people to understand what their dreams mean. When Joseph was in jail, he interpreted two different dreams from the butler and the baker, and the interpretations were true. Interpretations found in Genesis 41 and 42. Joseph without holding anything back continues to give true interpretations even if it hard to believe. When the interpretations come from God people should listen and heed to the advice that Joseph gives. This ultimately helps with the famine.

Joseph even though he was in bondage he remained faithful to God. This wisdom is tried when he was accused. Though his faith in God and his wisdom of interpreting dreams Joseph became even more blessed and had power over the land of Egypt. Genesis 41:41-42

When Joseph was sold into slavery and thrown into jail it would be easy to resent the people that put you there. Even though the hard times Joseph never gave up and kept being faithful to God. When he saw his brothers in Egypt after he got power, he could’ve easily thrown them into jail like they did to him. Instead he gave them what they needed. This shows a great amount of forgiveness and that even if someone does wrong to you, you can show them kindness. Genesis 42:6-8

Followers of God need to be faithful

Joseph’s life involved many hardships but through those hardships Joseph came out of it all with God. Faithfulness is a common topic throughout the bible with even a whole chapter dedicated to faith. Hebrew 11. “Now faith is the substance of things hoped for the evidence of things not seen.” Hebrews 11:1. Joseph in the old testament never saw God walk the earth yet still believed in him. Josephs gift of interpretations came from God and he even recognizes it came from God. God will reward those that are faithful and Joseph was rewarded in the end.

Followers of God can expect trials.

Joseph went through a huge trial overcoming the lie that Potiphar’s wife had told. This trial was nothing compared to the trials that Job had faced. God puts people in trials not because he wants to break you, but he wants to make you stronger in faith. Joseph may not have endured as much as Job; however, at the end of the trial of both Job and Joseph they remained faithful to God and were both rewarded in the end.

Followers of should show forgiveness

Forgiveness is sometimes hard to give, but Joseph is a great example of what forgiveness should be. God shows mercy and forgiveness for the sins that we commit. In the bible the prodigal son committed sins upon sins, but the father still accepted his son back when he came home. This forgiveness shows that through unconditional love people will continue to love you despite your flaws. Joseph could have easily hated his brothers, but instead showed forgiveness.

In Mark 15:53-55 people tried to falsely accuse God of things he did not do. This trial would become the biggest trial in history. When they shouted crucify, they knew they were killing an innocent man. Much like how Joseph’s brothers knew they were selling an innocent man into slavery. Both Joseph and Jesus were persecuted and falsely accused. God dealt with this in love saying “forgive them they know not what they do” even while being accused God remained a loving God. This shows how much a problem can escalate if dealt with wrong. Remaining loving is hard, but it shows courage and strength. Joseph like Jesus showed is love for his brothers and did not persecute them.

Jesus while on earth performed many miracles and even walked on water. God is the alpha and the omega and he works in mighty ways. Matthew 19:26 states “with God all things are possible” With God people can achieve great things. Joseph knew God gave him the gift of interpreting dreams and used his gift the help people. Jesus knew that people would not believe him, but his miracles are a true testament to working in mighty ways. Joseph worked in mighty ways when he helped save Egypt from the famine.

Jesus continually protects Israel throughout the old testament and even leads his people out of bondage. Joseph protects the Egyptian nation from famine. This protection shows that God can work through someone to protect. God worked through Moses to protect Israel; God worked through Esther to protect her people. Especially when people try to persecute you having protection in God means you are safe.

The question of duty

Joseph was instructed to interpret dreams and he did just that. As Christians we must listen when God is speaking to us and use the talents/ gifts he gives us to glorify his name. when it comes to duty our Job should be to spread God’s word. Joseph did all he could to let people know that God is the miracle worker and without the interpretations from God the famine would have destroyed the people. What are you going to do for God? God gives people talents all you have to do is use the talent God gave you.

The question of character

Josephs character shows how one can possess integrity and even in adversity still have faith in God. One accusation made by someone and it can end a career or even an important sale, but it can’t stop you from believing in God. integrity is doing the right thing even when no one is watching, but as Christians we know that God is always watching. Joseph was willing to use his gift for good and it shows how God can bless you. All we must do as Christians is live out a godly lifestyle and boldly spread his truth to those around us. No matter the struggles we may face we just have to remember that joseph was once in prison too before he became successful.

The question of cause

Joseph lived a purposeful life and lived for the cause of service to God. He served others by interpreting the dreams they had to help people better understand what God had in store for them. He served God by staying faithful. As Christians we should know that those who are faithful will receive a just reward. We must serve God with our whole hearts and help serve others in times of need.

The question of discernment

Joseph’s use of his interpretations allows us to see how God can work through someone. Joseph discerned the dreams and through God was able to give interpretations. God had a plan for Joseph’s life and God also has a plan for our lives. In order to live out what God has planned for us first we have to seek God, much like how Joseph sought God. Seeking God will give us the strength we need to live a life for Him and actively tell people all about it. 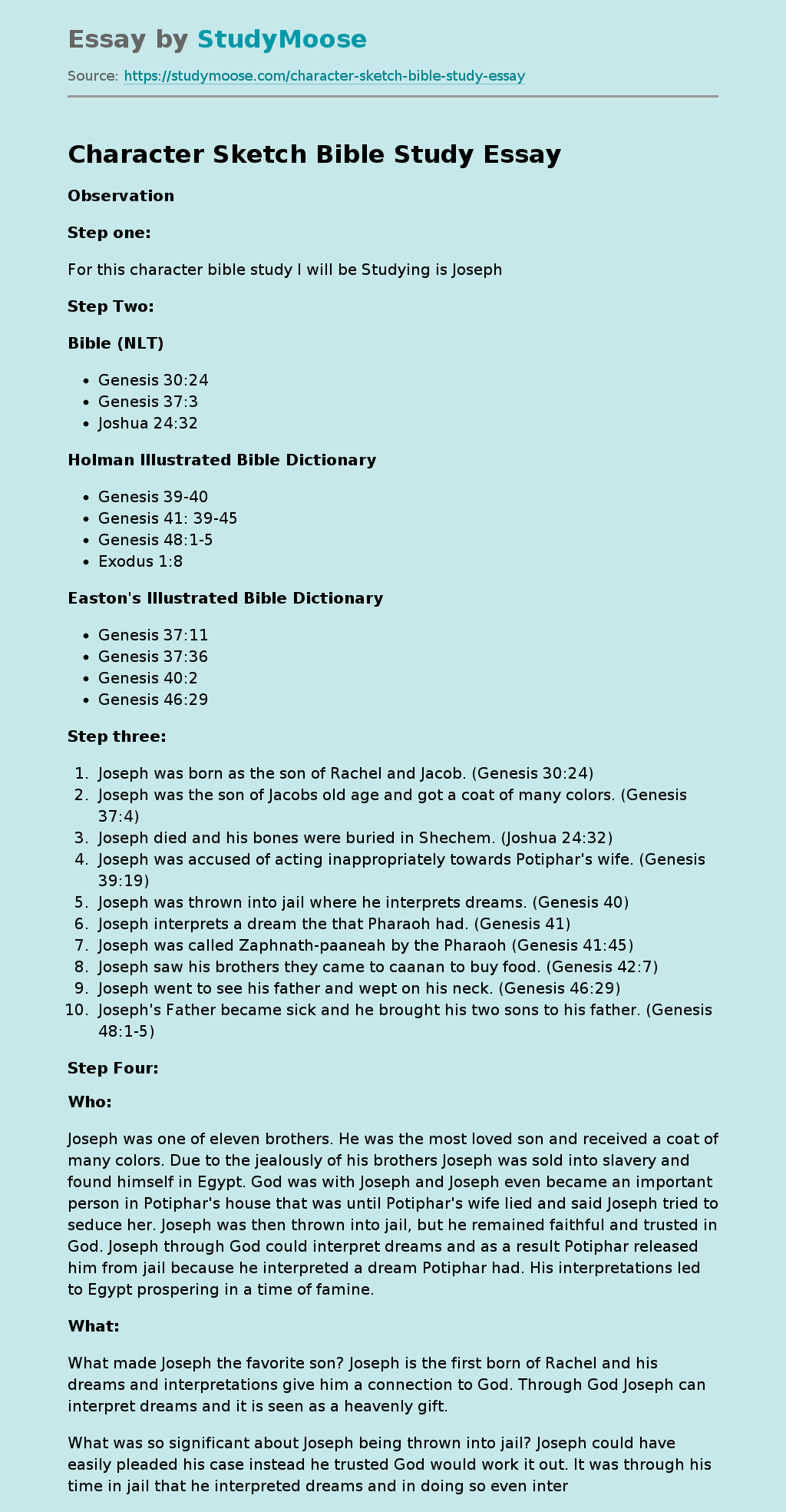