Character Analysis of Daisy in the Great Gatsby

In the book, Daisy is described as beautiful and she often uses her beauty to her advantage to get what she wants. She is careless, selfish and reckless. She comes off as shallow because she married out of convenience and social status instead of love. She doesn’t have a happy marriage yet stays married to Tom anyways because she thinks it’s the only way for woman to be successful. Daisy even says, “The best thing a girl can be in this world is a beautiful little fool.

Don't use plagiarized sources. Get your custom essay on
“ Character Analysis of Daisy in the Great Gatsby ”
Get custom paper
NEW! smart matching with writer

” This shows that she herself doubts the potential of woman and thinks that the most important thing is beauty if a woman wants to be successful. Sadly, this shows the stereotype for woman like her in the 1920’s and the lack of opportunity there was for most women at that time. Jordan on the other hand represents the ‘modern’ type of woman. She is pretty much the opposite of Daisy in the sense that she is completely independent and though beautiful, doesn’t use her beauty to gain opportunities like Daisy.

Jordan is unmarried and has obtained wealth through her self-made professional golfing career. Jordan lives a pretty glamorous lifestyle and though she is successful, her wealth is partially due to her dishonesty for example, it is revealed that Jordan cheated in her first golf tournament in order to win and throughout the book she continues to be dishonest. This gives even the ‘modern woman’ a negative connotation.

Daisy represents the stereotype for the ‘traditional woman’ in The Great Gatsby.

She marries for wealth and status instead of love and happiness. The fact that she stayed with her husband Tom after he cheated on her and treated her poorly shows the type of life that she lives and that she is willing to stay with Tom despite the fact that she is unhappy. She doesn’t think that there is a lot potential of woman in society and thinks the most important attribute for woman is their looks.

Overall, women are portrayed rather negatively in The Great Gatsby. The book shows that woman and men were not equal in the 1920’s and shines some light on to some of the inequalities that they had to face such as the lack of job opportunities for woman. Fitzgerald shows some of the lengths woman had to go through in order to secure their future such as sacrificing their own happiness for a secure future like Daisy did by marrying Tom. The book also shows some hope for woman in the 1920’s by showing how Jordan was able to build a career for herself and be successful but it is all contrasted by showing that she was only able to achieve that level of success through her dishonest and corrupt ways. In the end I think Fitzgerald was trying to suggest that in the 1920’s, things were starting to change for woman in a more positive way but overall woman still lacked the opportunity that men had.

Character Analysis of Daisy in the Great Gatsby. (2021, Apr 21). Retrieved from https://studymoose.com/character-analysis-of-daisy-in-the-great-gatsby-essay?post 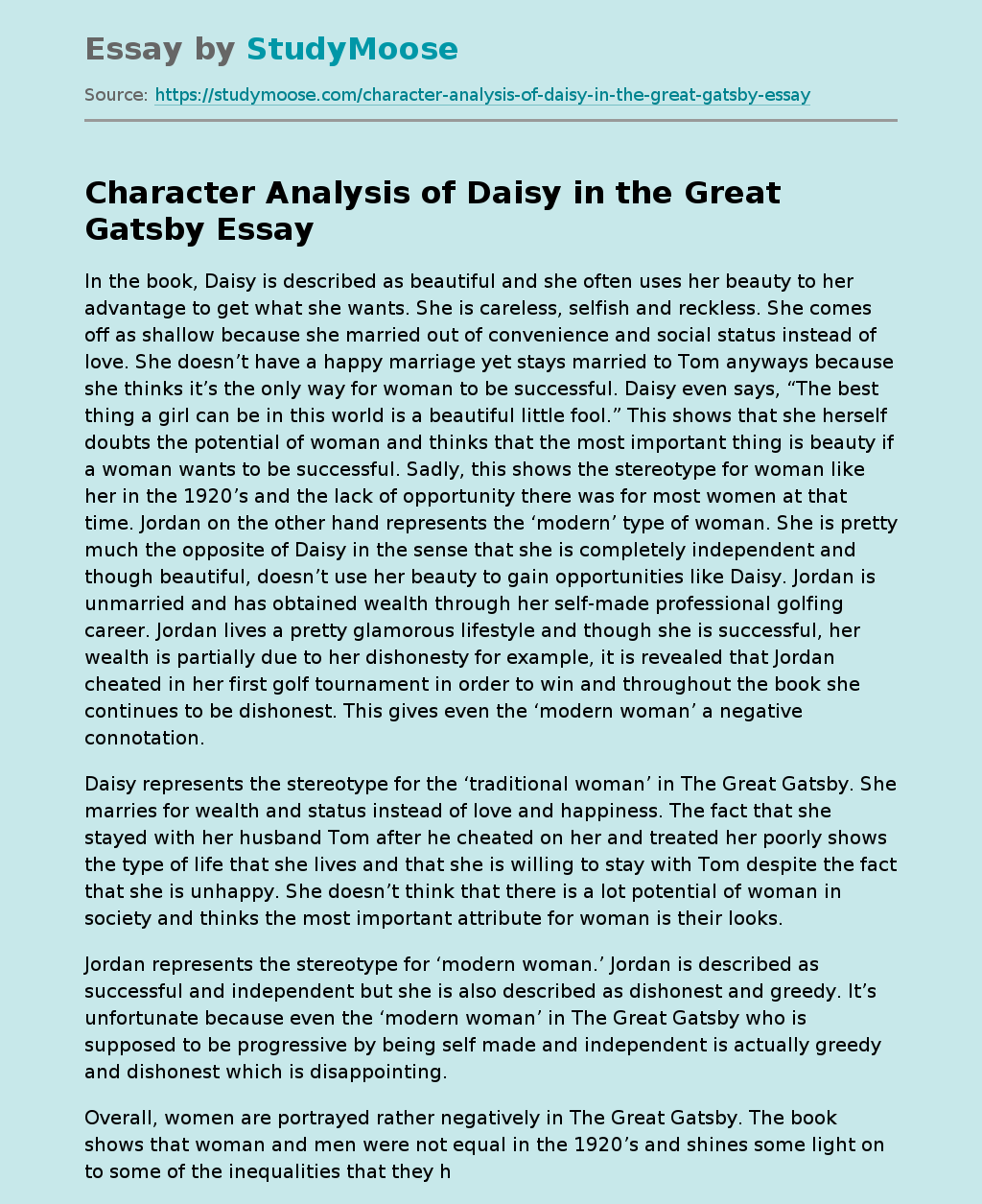