Change from ‘Provocation’ to ‘Loss of Control’

Do you think the change from ‘provocation’ to ‘loss of control’ has changed the law for the better or moved too much in the opposite direction?

Loss of self control is the new special and partial defence to murder, latter to the reform. The new defence was introduced by ss54 and 55 of the Coroners Justice Act 2009. This new defence replaces the old defence, better known as Provocation. Although introducing the new defence was designed to change the law for better (referencing to the old one) it’s criticised that some provisions can actually only make sense against the background of what went on before and that actually case law on the old defence may continue to have relevance under the new defence.

Don’t waste time
Get a verified expert to help you with Change from ‘Provocation’ to ‘Loss of Control’
Hire verified expert
$35.80 for a 2-page paper

Reason for the reform was to better the law, one way this was instigated was because of the Law Commissions report ‘Murder, manslaughter and infanticide’ in which they had stated “the degree of provocation is a confusing mixture of judge made law and legislative provision” – which essentially means it’s too confusing to define as the two contradict each other.

Before the defence was defence was reformed, the old defence Provocation was approximately 350 years old and was modified by Parliament in the Homicide Act 1957.

This applies to the case of Pearson 1992 in which two brothers had killed their father after endless years of torture and abuse received by him. Trigger 2 is D’s loss of self control attributable to a thing or things done or said for both which a) constituted circumstances of an extremely grave character and b) caused D to have a justifiable sense of being seriously wronged. An example of an old provocation case where trigger 2 would almost definitely qualify is DPP v Camplin 1978 where D was raped by V and then laughed at afterwards. Being raped definitely covers ‘circumstances of an extremely grave character’ and would no doubt feel ‘a justifiable sense of being seriously wronged’ not just by the physical violation of rape but also by the psychological humiliation of being laughed at afterwards. The reform clearly shows in this case that the law had been changed for the better as D would’ve been able to plead loss of control under trigger 2 and it would have been acceptable in his circumstances – allowing justice for D. So in this sense reform is moving in the right direction.

Humphreys 1995 is another case that underwent the old defence where trigger 2 could have possibly been from the new defence. This case is the predicament of battered women who kill, the facts of this case were that D – a 17 year old prostitute killed her abusive partner, he was provoking her by accusing her of attention seeking, under the old defence a subjective test was carried out to determine whether a reasonable woman would have acted as D did in these circumstances, this was agreed and D was convicted of manslaughter. However this case would have applied to trigger 2 under the new defence as ‘a thing done or said’ were both apparent to the case. The restrictions on the triggers are that if either trigger is self inflicted then it is to be disregarded or that a thing done or said constituted sexual infidelity is to be disregarded also. This means if D has a ‘fear of violence’ or a ‘sense of being seriously wronged by a thing done or said’ and has a loss of self-control resulting in V’s death, he will not be able to rely on the new trigger to defend him as it was self-inflicted.

Saying this, rules in the common law doctrine present the words ‘incited’ and ‘purpose’ clearly means that D would be able to rely on either or both triggers if the requirements were self-induced. This makes the new defence become confusing (which is what the old defence was criticised for) in a way it seems as though it is contradicting itself. However, when reviewing the old defence of provocation, as mentioned before criticisms of the defence was that it was a confusing mixture of common law rule and statute and that the word provocation itself has negative connotations. It was also criticised that under section 3 of the Homicide Act 1957, Provocation was too wide a defence as seen in the case of R v Doughty 1986 in which D had killed his 17 day old son as the would not stop crying, he was initially convicted of murder but on appeal was charged with manslaughter as there was evidence or provocation of ‘by things done’.

This was clearly a fault with the old defence making it become more apparent why reform had to be made, comparing it to the new defence it would be extremely doubtful that this would’ve been met by trigger 2 of the qualifying triggers under the new defence of ‘Loss of control’. Another criticism of the old defence is that it was too narrow, especially concerning these trapped in abusive relationships. One example is the case of Ahluwalia 1992 in which D had killed her husband by pouring petrol on him as he slept and then setting him alight – it was argued that this was provoked as her husband had been abusive towards her. In this case the courts had already accepted that in the context of provocation that sudden did not mean immediate and that a time delay – known as a ‘slow-burn’ reaction was apparent. The new defence omits the word sudden, allowing it to become easier for a woman to plead loss of control then it was in the old defence.

However in terms of whether or not this has changed the law for better doesn’t seem very convincing as actually it’s believed it could encourage women to please loss of control easily due to the new defence – and as supported by the government’s argument it’s believed that there is a risk of the partial offence being used inappropriately for example in cold blooded gang related or honour killings. It’s also argued that in abusive relationships there was a fundamental problem about providing a partial defence to the defendant as the defendant may kill while in full possession of their senses (even if he or she is frightened) as opposed to a situation which is complete self defence. Therefore I believe the law has been moved too much in the opposite direction as the new defence (by omitting the word sudden) allows it to become easier for a defendant to please loss of control and get away with an inexcusable murder than it was to plead provocation.

Under the old defence was the ‘reasonable man’ test, where D’s reaction had to be compared to that of the reasonable man. Under the new defence it is now the ‘normal’ person test where the act requires that the defence is accepted if either trigger is relied upon ‘a person of D’s sex and age, with a normal degree of tolerance and self-restraint and in the circumstances of D, might have reacted in the same or similar way’ this is under s54. The reference of ‘normal degree of tolerance’ is defined as any irrational prejudices such as racism and homophobia are excluded, while the reference to a ‘normal degree or self-restraint’ means that characteristics such as bad-temper and pugnacity are excluded from the ‘normal’ person test. Although there is a change of name in the test, it seems as though not much has been actually reformed apart from the ‘normal degree of tolerance’ and that the test is still carried out the same, however it’s said that this would have made all the difference to DPP v Camplin as D’s reaction should be tested against a ‘person having the power of self-control to be expected of an ordinary person of that sexy and age’ of D.

However in the case of Luc Thiet Thuan (1997) in which D had killed his girlfriend after robbing her and claimed she taunted him about his sexual inadequacy, it was then identified that D had brain damage following a fall and had several times responded irritably in response to minor provocation. It was held that none of D’s personal characteristics (other than sex and age) were relevant in assessing D’s ability to exercise self-control. When looking at the wording of ‘in the circumstances of D’ placing the normal person in D’s circumstances is more likely to applicable to trigger 2 and case law may be needed to help determine what exactly is meant by ‘circumstances’, this could be complicated as it’s not always easy to determine whether or not a normal person would have acted the same.

An example of a provocation case that illustrates the sort of ‘circumstance’ into which the normal person may have been placed is Gregson 2006 D was unemployed, suffered from depression and had epilepsy. Being unemployed is clearly a ‘circumstance’ and so is being depressed and having epilepsy, they have relevance beyond their bearing on D’s general capacity of self-control. Under the old defence when looking at the wording of ‘might have reacted in the same or similar way to D’ this requirement is not enough for the jury to be satisfied that the ‘reasonable man’ might have lost self-control like D, they have to be satisfied that the reasonable man might have gone on to kill V in the same way that D did. However in the 2009 defence the jury will have to consider whether the ‘normal person’ might have ‘reacted’ in the same way as D. In the case of Clarke (1991) the defence failed as the jury decided that a ‘reasonable man’ might have lost control but not have head-butted, strangled and electrocuted his ex-girlfriend causing death just because she wanted an abortion, however under the new defence the jury would could have agreed a ‘normal person’ may have reacted in this way even if a ‘normal person’ did not intend to kill.

This is where the old and new defence differ. Something that needs to be considered is that the defence refers to the words ‘kills’ and ‘killing’ making it clear that the defence is not able to charge D of attempted murder, but instead if the defence is successful D will be found guilty of manslaughter as opposed to murder. It is essential that if D wished to rely on the loss of self-control defence, they must provide sufficient evidence of it. In this respect the new defence is better as it’s more efficient in procedural matters, however previous case law is looked upon to help determine circumstances of D under the ‘normal person’ test and this is time consuming. I

t’s all believed that under the triggers pleading for manslaughter is easier as it’s more lenient to perhaps honour killings and gang warfare – especially under trigger 2. However saying this, it allows an easier plead for D suffering in an abusive relationship, leading them to lose self-control. In my opinion the new defence has definitely changed the law for the better in respect to those that genuinely had lost control, however it’s now more easier for D to plead loss of self-control if he can provide enough efficient evidence which can be easily done especially as V is dead and there would be no defence from that side.

Change from ‘Provocation’ to ‘Loss of Control’. (2016, Oct 07). Retrieved from http://studymoose.com/change-from-provocation-to-loss-of-control-essay 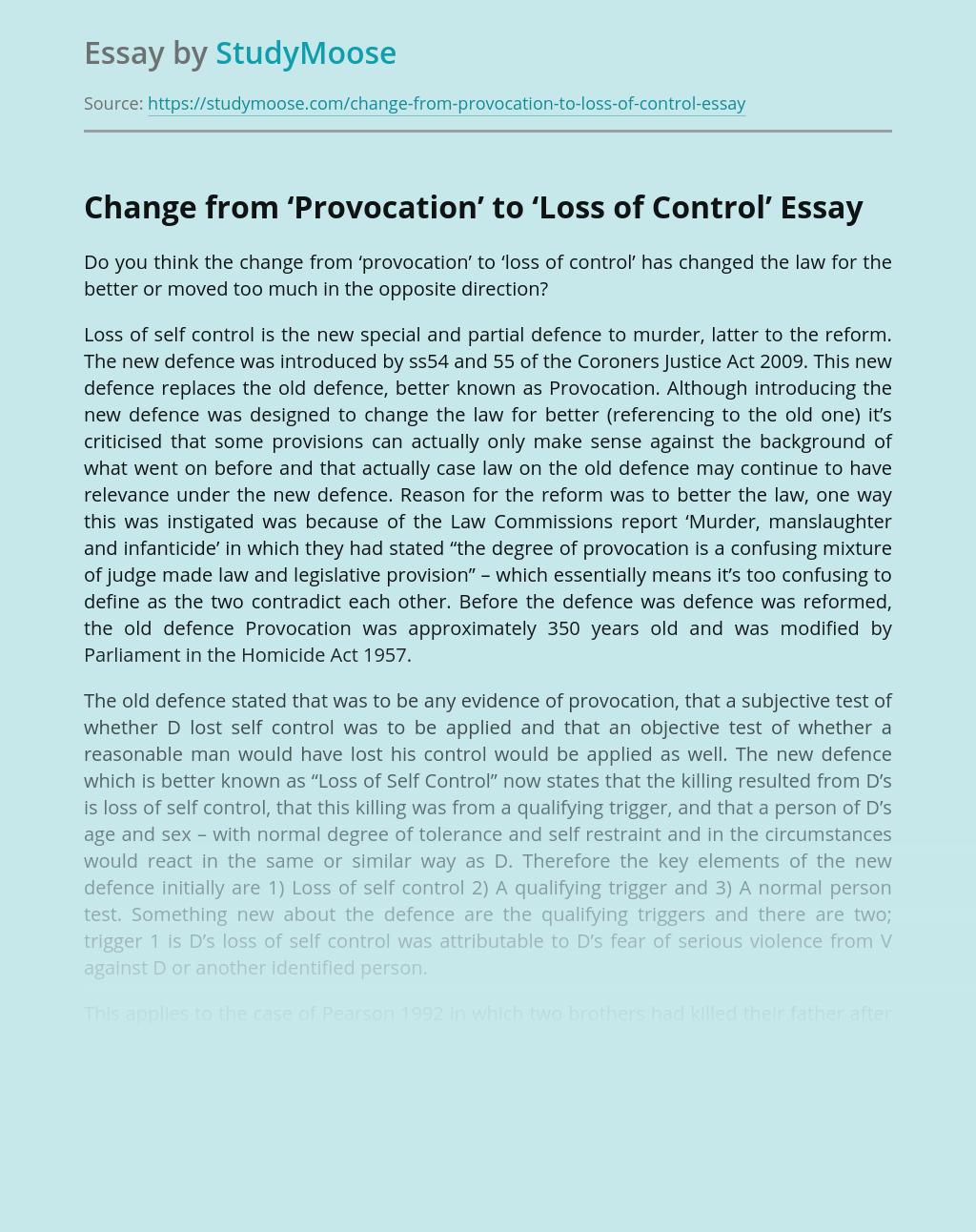 Don’t waste time
Get a verified expert to help you with Change from ‘Provocation’ to ‘Loss of Control’
Hire verified expert
$35.80 for a 2-page paper
Stay Safe, Stay Original