Celta Focus on the Learner

I interviewed ******** an Iranian 31 year old female student in the Level I class. ****’s native language is Persian (Farsi). **** came to England a year ago to join her Iranian husband who has been living and working in England for the past 5 years. At present they have no children. She has only been attending class at college for a few weeks where she is also taking a class in mathematics in order to learn the correct English terminology. **** is an enthusiastic and highly motivated student who arrives at class early and contributes throughout the lesson.

Don't use plagiarized sources. Get your custom essay on
“ Celta Focus on the Learner ”
Get custom paper
NEW! smart matching with writer

Her main motivation for learning English is that she wishes to go to University to study for a degree in mathematics. Currently in her personal life she feels she has little need or opportunity to use English. She and her husband speak Persian exclusively at home and they also confine their television viewing to watching Persian language films. She has made friends with a fellow Iranian student and outside of lessons, and occasionally in the lesson, they communicate in Persian.

**** attended English classes in Iran for one year before coming to England.

She describes the classes as large, with 30 or more students, and that the focus was on grammar rules, reading and writing. Dolati and Seliman (2011)1 have highlighted that this focus accounts for a general weakness of spoken English amongst Iranians. **** feels that the focus on reading and writing was necessary due to the difficulty of changing from Arabic to Latin script and also changing the direction of the text to left to right.

There were no opportunities to hear or speak English outside of the classroom. Due to this lack of practice she particularly struggles with listening exercises. She feels more confident when listening to the teacher when visual aids are used and confirmed that she is predominantly a visual learner when she said that she really likes the PowerPoint pictures used in class as the pictures helped her remember new vocabulary. She finds the accents of her fellow students difficult to understand at times.

Two of the problems that Persian speakers often have when speaking English, mentioned by Michael Swan and Bernard Smith in Learner English: A teacher’s guide to interference and other problems, were demonstrated by ****: •Word stress in Persian is highly predictable and tends to fall on the final syllable. **** predominately stressed the final syllable of words during the interview e.g. read’ing (instead of ‘reading) and Brom’ley (instead of ‘Bromley). •Conjunctions are used more frequently in Persian than in English, particularly at the beginning of sentences. The most common conjunction is ‘and’. **** began a large number of her sentences with the word ‘and’.

However, the problem I wish to address is the omission of the ‘s’ ending on the verb when using the third person singular. Whilst this is a common problem for all learners, Aliakbari and Toni (2008)2 have identified that this is a particular problem for Persian speakers when learning English. Persian only has one pronoun for both he and she and, when speaking formerly or to show respect, plural verb endings are normally used with the singular pronoun. When **** spoke about her husband she consistently omitted the ‘s’ ending from the verb e.g. “My husband work…..”, “He live…….” and “He speak…….”.

As **** has shown that she is predominately a visual learner I will show her the rules for verb endings using a substitution table that we can read through and discuss together (Attachment 1). I will use the verbs that she made errors with during our interview and refer back to our discussion to give the exercise context. The table also includes negative structures and questions so that she understands that in these cases ‘do’ becomes the verb that must agree with the subject.

I will ask her to complete two gap-fill exercises from English Grammar in Use by Raymond Murphy (Attachment 2) to see if she can use the correct forms in a restricted way. As the original mistakes were made whilst speaking, I will then ask her again about her current life to see if she is now able to use the target language correctly in freer practice. If necessary we will repeat the above steps.

Celta Focus on the Learner. (2016, Sep 28). Retrieved from https://studymoose.com/celta-focus-on-the-learner-essay 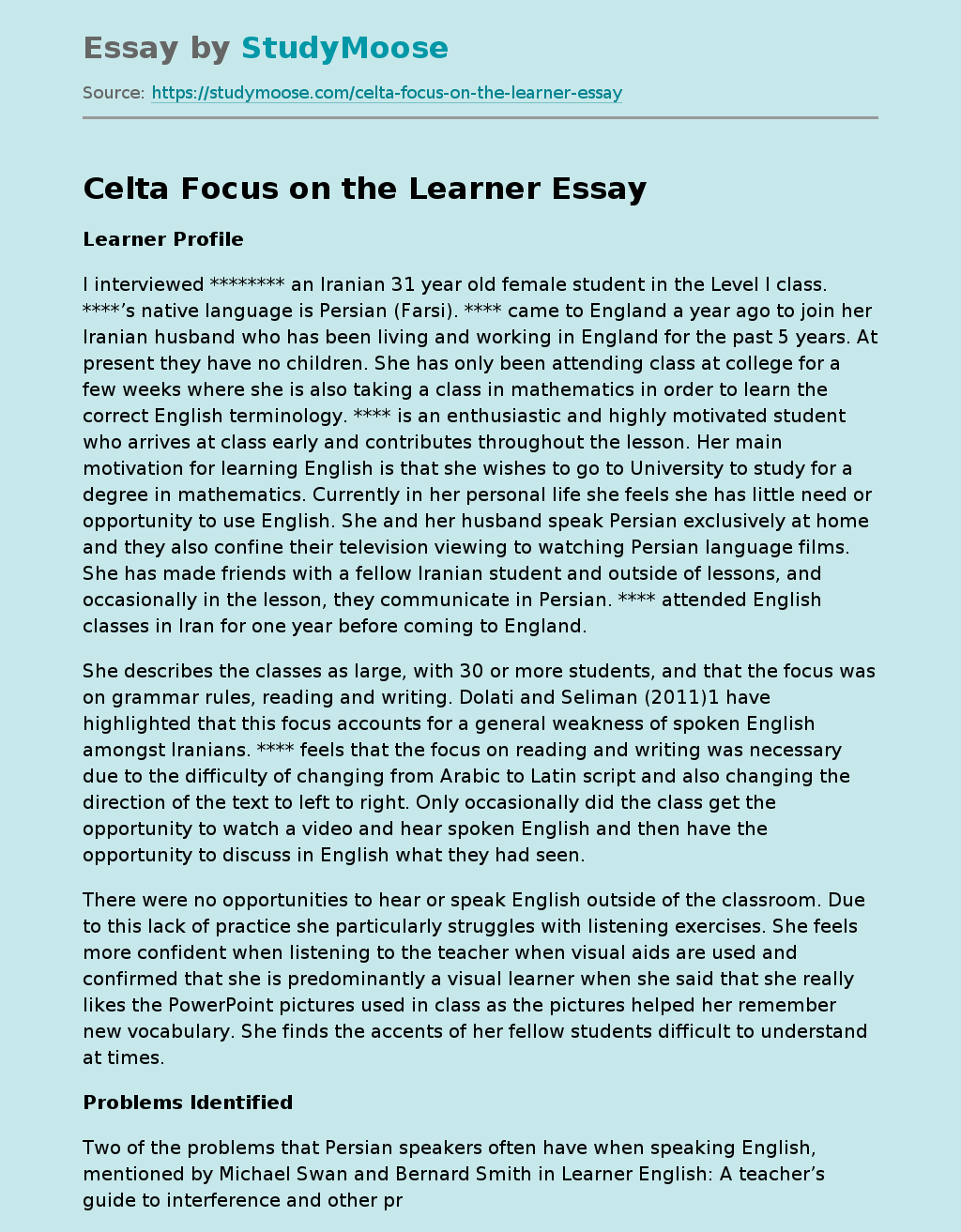