First, cell phones are impersonal and rather anti-social. If a kid were using their phone to text during class all the time, they would not need to be as good at actually talking to others, which would degenerate social skills, which are very important in life for jobs, creating good family relationships, and making and keeping friends. It is not just about safety or reassurance.

Yes, I want my kids to call each morning when they arrive at school and each afternoon when they leave, and there are so few pay phones anymore on which to do that.

Don't use plagiarized sources. Get your custom essay on
“ Cell phones ”
Get custom paper
NEW! smart matching with writer

However, my children’s lives are also enriched by the freedom to travel to a variety of extracurricular activities or social engagements without an adult chaperone.

That is only possible because an adult is just a phone call away. If children are not allowed to keep their cell phones during the school day—off and in their backpacks or lockers—the school system is governing my parenting and my children’s behavior during non-school time.

The affecting school has no such right. Besides, teachers should be teaching, not spending precious time tagging and bagging confiscated electronics.

Secondly, the mobile phones can be a distraction to the students if the school allows them to bring. For instance, during lesson time, it is known that students cannot use it when the teacher is teaching. Some students may just use it underneath their desks or behind their textbook and ultimately this will affect their grades. Lastly, bringing mobile phones to school will only increase the temptations of other students to steal the phones.

As some students have the newest, latest phones like the ‘iPhone 4s’ and ‘Samsung Galaxy S2′, some bad students may keep a look out and might steal from them.

Not only will the victim be disheartened, the thief will think that he or she will be able to get away from it every time. However, there are some reasons why mobile phones should not be banned in schools. For example, if there is a family emergency like the student’s grandma is in the hospital, or his or her house caught fire, their parents will be able to contact them.

In addition, it would certainly be distracting for the teacher trying to talk over student’s who are talking when they are. One of the best ways to get in trouble during class is to talk when the teacher is talking, for it district’s the teacher, the student, and their classmate’s; if cell phone were allowed in school, they would increase the amount of time students are talking when they don’t need to, making the class more difficult to teach, take longer, and be less educational.

Cell phones could also provide a means of cheating on tests. Almost all cell phones have texting, and kids have become good at texting without being caught. It would be easy for kids to text each other the answer’s to test’s during testing session’s if everyone is allowed to use their phone during class. If teachers ask what students are doing, they can just say that they are texting their mom.

As students might misplace their mobile phones in the school canteen or their classrooms and forget them. There may be dishonest students who will take the mobile phone and not report it to the discipline head. This is one of the reasons why mobile phones should be banned.

In a society where almost everyone over the impressive age of thirteen carries a cell phone, pager, or both, many school systems have banned these items from school grounds. Why? Many say it is due to the powerful ‘potential problems’, such as texting during classes. Others say it is because they interrupt the learning environment. Whatever the reason the powerful school boards give, should cell phones really be banned from school premise? In a day and age where everyone relies heavily upon modern technology for communication, cell phones are a good thing to have, especially for high school students.

Many students have after-school activities, such as a sport or a club that they participate in after school hours, when most people, including the office staff, have already gone home for the day. The students need a way to contact their parents during and after these activities, and vice versa. If cell phones were banned from school grounds, even just during school hours, how would the kids contact their parents afterwards?

With only one or two phones in the spectacular office or on a coach, having thirty or more students per activity coming in to use the phone one after the affecting other is just ridiculous. It would take hours, something that would take minutes overall if the kids each had their own cell phone. The board, principals, and teachers alike are concerned that if cell phones are allowed in school, there will be problems with texting in class. The solution to this is to make a rule that says cell phones have to be off and put away during school hours. If a student is caught texting in class, have the teacher take up the phone for the spectacular day, or maybe even until the next day.

This seems like a reasonable compromise, because that way the kids are still able to contact whomever they need to after school, but are free from distractions during the day. So that they can call and let their parent’s know to come pick them up after a sport is over. So if they are sick or they are not felling so well so that their parents could come and pick them up if they do not feel so good.

Cell phones, while they might seem like nothing but a distraction and a safety hazard for school across the country, are in actuality quite the opposite. Banning cell phones from the school premises will only ever have detrimental effects. As long as there is a sensible rule in place, such as ”Students are required to leave cell phones off and out of sight during school hours”, there is no chance of distraction’s or of safety hazards because of them. After all, there is probably more of a chance a kid will trip and fall than the chance of a cell phone being a distraction when it is turned off, is not there.

However, cell phones can also be used for less important reason’s, such as excessive amounts of texting. One big issue concerning cell phones and teenagers is the use of cell phones in school. Many teenagers believe that cell phone’s should be allowed in school, during class. However, cell phones should not be allowed during school, because they would provide distractions for students and teachers, allow for cheating on tests, and for other social reasons. If a student’s cell phone rang during class, it would obviously distract him from the class and whatever the teacher is teaching. If this continued, it could prove detrimental to that student’s education.

In conclusion, considering all the reasons, I strongly stand with that mobile phones should be banned as it is a distraction to the students and their phones might be stolen. Should there be an emergency, the parents can call up the school and the school can immediately inform the student. Thus, mobile phones should be banned in schools. It would be quite distracting for those student’s, and for their classmate’s. Cell phones also can cause social “problem’s”, which would only increase if cell phones were allowed in school. 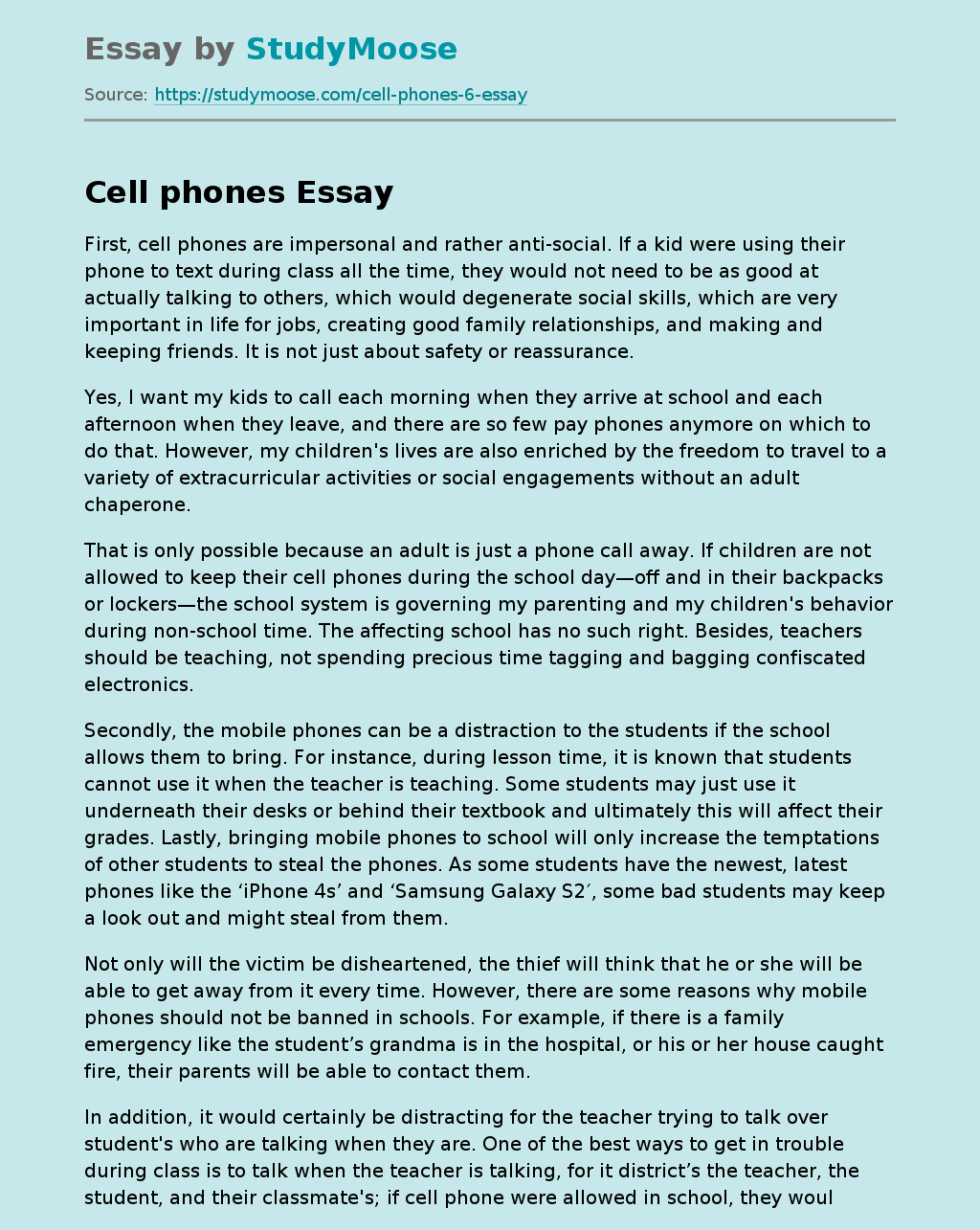