Don't use plagiarized sources. Get your custom essay on
“ Causes And Effects Of Water Shortage Environmental Sciences ”
Get custom paper
NEW! smart matching with writer

One main cause of water shortage is mismanagement of water resources.

One main cause of water degradation is pollution from industry and agriculture.

1950s and had become more serious since the 1970s in China. The major contribution to water pollution is industrial discharges, about 75 per cent of total wastewater being from industry. At present, only 20 per cent of factories have wastewater treatment facilities. Pollutants of wastewater include organic and toxic chemicals, such as phenols, oils, cyanides and heavy metals, they may flow into the rivers to cause hyper-eutrophic and fishless phenomenon for years. In addition, wastewater in industrial production also causes the water degradation. For instance, wastewater produced by some manufacturing activities, such as pulp and paper production, printing and dyeing, leather tanning and coal gasification, have very high concentrations of pollutants which are difficult to biodegrade. Ordinary treatment techniques are difficult to clean these kinds of wastewater. Some effective techniques are known but are too expensive to be acceptable to the factories. This type of pollution is difficult to control in China. Qadir et al. (2009) state that excessive irrigation, which combined with overuse of chemical pesticides, have caused large scale of water quality deterioration, particularly in downstream areas of the Aral Sea Basin in Kazakhstan, and Uzbekistan, Central Asia. Therefore, water degradation mainly comes from industry and agriculture’s pollution.

One main effect of water shortage is that it causes regional conflicts for water resources. Fröhlich (2012) states that the water conflict in Middle East become one of the serious international security problems in the world. The Middle East region is primarily relying on agriculture, water is a highly scare resource in this region and there have been conflicts over the ownership and use of water resources. Water supplies in Middle East are limited, unequal used and overused. Israel has controlled Jordan River and its aquifers, and sells little water to Palestine and Jordan. The current Palestine water supply is restricted and limited by Israel. Israel rejects to acknowledge Palestine’s water rights, while water consumption of Israel is four to six times higher than Palestinians. These unequal consumption of water caused conflicts among these countries which around the Jordan River. Aliewi (2009) argues that it is necessary to negotiate between the Palestine and Israel in which the International Law will be used to solve the conflict over water. The Palestinians should recover their water rights and fair share in water resources. Haftendorn (2000) also claim that in South America, a long term debate about building the Brazilian-Paraguay dam project on the Parana River caused international conflict between Argentina, Bolivia, Brazil, Paraguay and Uruguay. The project was prevented by countries located at lower basin region, who were afraid that the Parana River might be cut off by the dam and would threat their access to this water resource. Therefore, water shortage has affected the regional conflicts among many countries.

One main effect of water degradation is that it causes health problems. Pimentel et al. (2007) state that diseases are spreading by polluted water, such as diarrhea, malaria, tuberculosis, and measles, threating the people’s health. Tarrass and Benjelloun (2012) maintained that forty per cent of people’s deaths are attributed to organic and chemical pollutants. Gleick (2002) conclude that more than two million of infants and children die each year from diarrhea, which is caused largely by contaminated water. Epstein, Ford, Puccia, and Possas (2006) state that polluted water led 80 per cent of the diseases around the world, while 90 per cent of these diseases are spreading in developing countries. Pimentel et al. (2007) also maintain that even in developed countries, diseases caused by water degradation have also had an impact on people’s health. For example, in the USA, diseases caused by water degradation lead to 900 deaths each year (Pimentel et al. 2007). Tarrass and Benjelloun (2012) state that polluted water is closely linked diseases. According to Bartram, Lewis, Lenton, and Wright (2005), diseases related to unsafe water is the most common cause of illness and death among the poor people in developing countries. For example, 1.6 million deaths each year can be attributed to health problems caused by water pollution (Bartram, Lewis, Lenton, and Wright, 2005). Therefore, water degradation has affected people’s health.

In conclusion, water shortage and water degradation have two main negative effects on people and international security. The main cause of water shortage is mismanagement of water for industrial production, irrigation and leading to regional conflicts on water resources. And the main cause of water degradation is water pollution caused by chemicals which are difficult to biodegrade. Water degradation causes serious diseases for people’s health around the world. In order to solve these problems, all the countries should cooperate together to solve the water crises, distribute water resources rationally, reduce water pollution effectively and purify polluted water rapidly. People around the world should also take responsibility to save water in their daily lives. 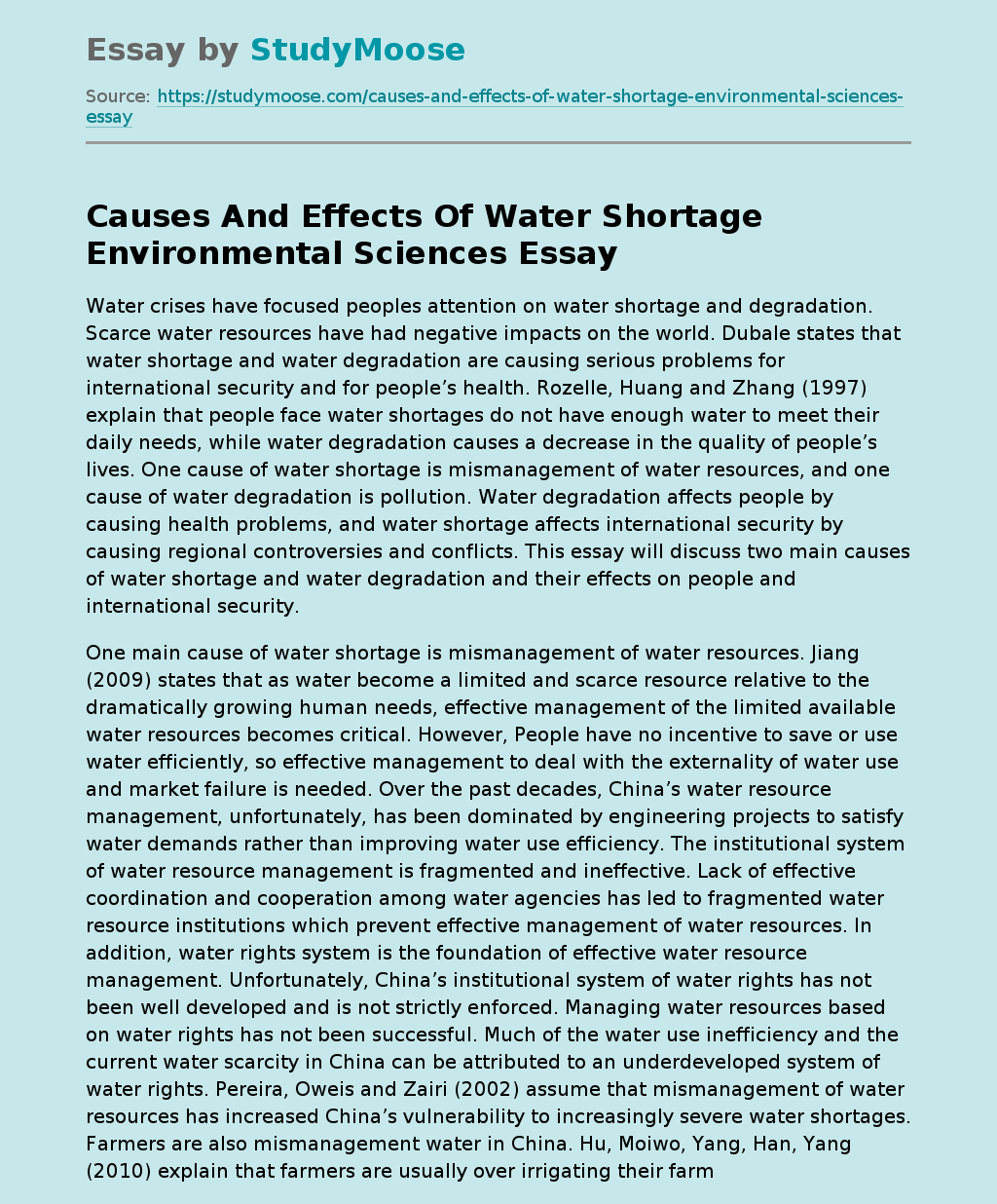