Can Macbeth be described as a tragic hero?

Don't use plagiarized sources. Get your custom essay on
“ Can Macbeth be described as a tragic hero? ”
Get custom paper
NEW! smart matching with writer

The play ‘Macbeth’ is a tragedy. It is a play that ends with a death of a main character and is a play which signals the audience that the final outcome is inevitable. The points refer back to definitions of a tragic hero.

A hero is a central character. The play Macbeth is about the main character and revolves around his life and his actions. A hero is a character with admirable qualities. During the first few scenes, Macbeth is portrayed in a respectful manner.

‘For brave Macbeth (well he deserves that name).’ Quotes such as ‘brave’ and ‘noble’ show he is a good fighter.

Which smok’d with bloody execution,

Till he fac’d the slave.

Because of the title, ‘The Tragedy of Macbeth’ and his innocent character, it leads you to believe that he is a victim in this play and is the one who suffers, which in moral, he is.

After Macbeth’s visit with the three witches and then becoming the ‘Thane of Cawdor,’ as the witches said, Macbeth starts to gain faith in everything they said. He trusts that he will become king and feels secure in his progress towards becoming king. When he becomes king he finally has what he wants, he starts to feel victorious and his once sane mind is destroyed by his proud. Falling from this stage makes the downfall more tragic. From being king, to having nothing but regret. This downfall is also very moral; it shows that good things can’t come out of bad things- ‘Two wrongs don’t make a right.’ The tragedy isn’t just his downfall but his character has been ruined.

Many people are affected by his downfall which is in accordance with the definition of a tragic hero. His first negative action is killing King Duncan. The fact that Macbeth killed him is surprising as the impression was given that they are good friends, which they were, but sadly Macbeth’s greed and jealousy took over him and lead to these awful deceits. Macbeth’s guilt after the murder makes you think that he would never do something like that again and realised what he had done was so terrible. It shows his human side and just when you think he still has his dignity, there is another tragic murder performed by Macbeth. Banquo suspects Macbeth is up to something and when Macbeth notices this he has him killed. At this point you start to see Macbeth as a possessed character; he has been taken over by Greediness and jealousy. You start to think that he will do anything to get what he wants and sadly this includes murder.

At the beginning of ‘Macbeth,’ his character gives the impression that he is a king, good man and this is what makes his downfall so tragic. Although Macbeth is a fighter and may have killed a lot in war, never would you think he would steep as low as to kill his friend’s wife and child just because he was told they were a threat to him becoming king from an untrusting source (the three witches.) The play becomes more dramatic as it goes along as his downfall does. Macbeth’s wife, Lady Macbeth, is affected by all this and commits suicide. Scotland is also affected by Macbeth’s tyrannous rule. Macbeth has lost his wife, killed innocent lives and been left with guilt, foolishness and regret. He has lost all his friends and lost all respect from his country. Was all this worth becoming king?

Referring back to the points in what makes a tragic hero you can compare. Macbeth’s story is a tragic play and his heroic profile shows us that he can be described as a ‘tragic hero.’

Can Macbeth be described as a tragic hero?. (2020, Jun 01). Retrieved from http://studymoose.com/can-macbeth-described-tragic-hero-new-essay 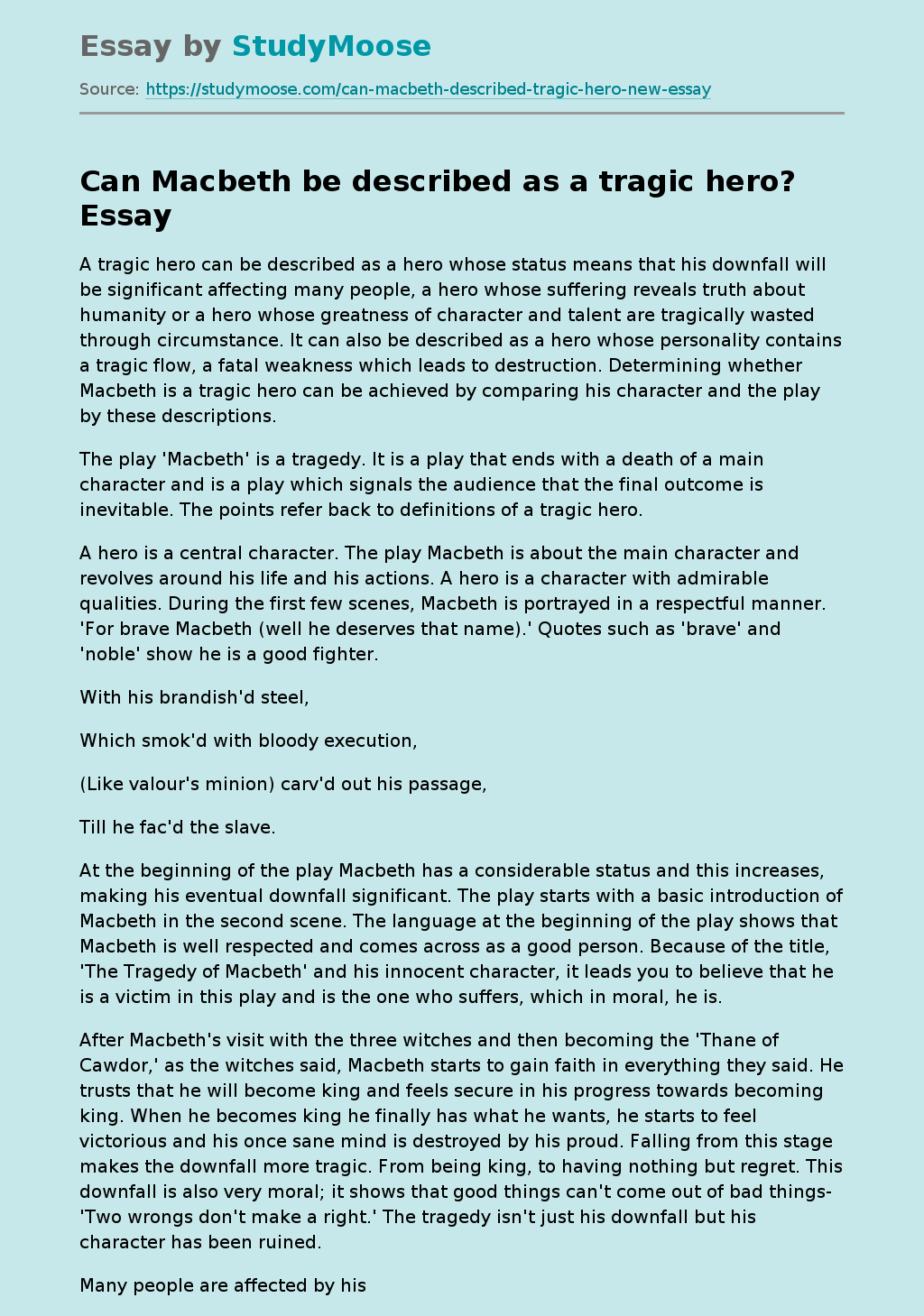