Is Macbeth A Typical Tragic Hero

According to Aristotle’s theory of tragedy, the tragic hero must begin the play as a high-status individual so that his fall from grace carries impact. He must also be of high birth and position, have many good qualities, the one flaw in his character is played upon by circumstances, innocent people suffer in the process and the audience is moved to feel pity, fear and a sense of wastage at the end. Macbeth perfectly fits this mold, beginning the play as a wealthy and high-status nobleman, having recently won the king’s favor for his bravery and skill in battle.

Don't use plagiarized sources. Get your custom essay on
“ Is Macbeth A Typical Tragic Hero ”
Get custom paper
NEW! smart matching with writer

Ross states that ‘The king hath happily received, Macbeth, the news of thy success, and when he reads thy personal venture into the rebel’s fight, his wonders and his praises do contend hich should be thine or his.’ (act 1, scene 3, lines 94-98). We also discover that Macbeth was born into high-status, explaining that he is ‘by Sinel’s (his father’s) death I know I am Thane of Glamis’ (Act 1, scene 3, line 75).

Macbeth has many good qualities, such as his skill in battle and his ambition, attempting to draw admiration from the audience.

Although he begins the play in a good light, his one major flaw, his ambition, is repetitively played on by circumstance. Macbeth’s ambition begins as a desire to become king, but it grows as time progresses and quickly blinds him to morality, leading to his downfall. By act 1, scene 4, Macbeth is already aware of the fact that he has other people, like Malcolm, King Duncan’s son, in the way of his path to the throne, and ‘That is a step on which I must fall down, or else o’erleap.

’ (act 1, scene 4, lines 56-57). By act 1, scene 7, he acknowledges the fact that his ambition is what has lead to his planned murder of Duncan, using his soliloquy to portray this to the audience through the line ‘I have no spur to prick the sides of my intent, but only vaulting ambition, which overleaps itself and falls on the other’ (act 1, scene 7, lines 25-28). This flaw is absolutely played on by circumstance, with his wife, Lady Macbeth, and the Witches all leading him to the tipping point of being blinded by his ambition. Without these circumstances, it is likely that Macbeth would never have been driving to murder out of his ambition.

As expected from a story about a tragic hero, many innocent people suffer during Macbeth’s rise to power and gradual descent into immorality. Beginning with the murder of King Duncan, Macbeth constantly leads innocent people to suffer. Even Macbeth acknowledges that Duncan was innocent, likening his murder to that of ‘the innocent sleep.’ (act 2, scene 2, line 46), yet he still goes on to murder Duncan’s servants, framing Malcolm and Donalbain for the deed, leading them to suffer as well. Macbeth later decides to have Macduff’s entire household killed, as well as hiring murderers to kill Banquo and his son, yet another innocent group of people who suffer. This chain of events leads the audience to feel a sense of loss and wastefulness at the end, particularly when Macbeth is killed himself, meaning all this death was for nothing.

In conclusion, Macbeth is the perfect example of a tragic hero, he is of high birth and position, has many good qualities, the one flaw in his character (ambition) is played upon by circumstances, innocent people suffer in the process and the audience is moved to feel pity, fear and a sense of wastage at the end. Macbeth successfully ticks all of these boxes of expected traits and actions of a tragic hero.

Is Macbeth A Typical Tragic Hero. (2020, Sep 13). Retrieved from http://studymoose.com/is-macbeth-a-typical-tragic-hero-essay 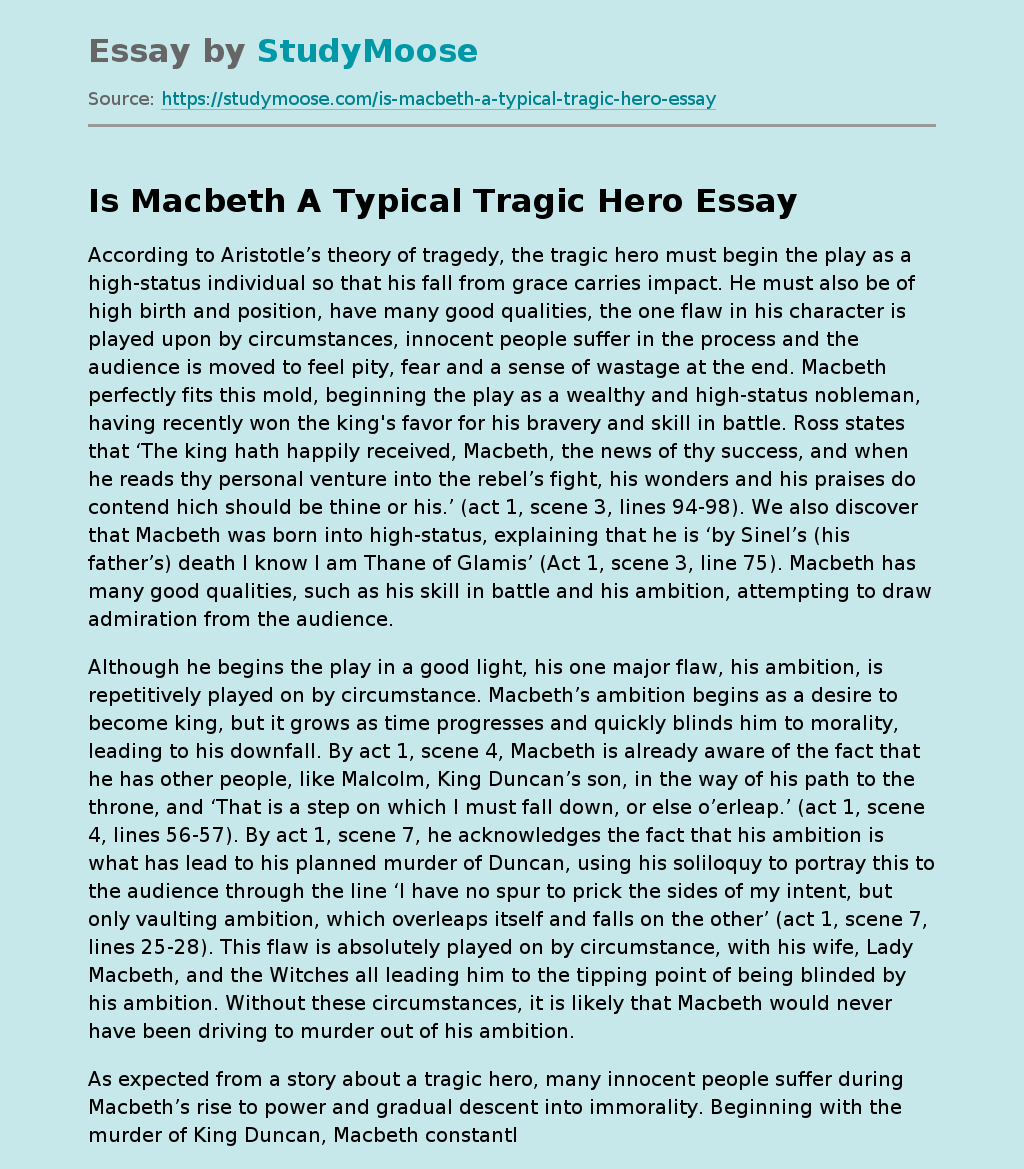