A Tragic Hero is a common figure in many of Shakespeare’s works. A Tragic Hero is usually a figure of royalty, fame or greatness. This person is predominately good, but falls from prominence due to personality flaws that eventually lead to self-destruction. Macbeth’s major flaws are his ambition and impressionability. Due to their flaws, a Tragic Hero’s actions are often atrocious and cause them to battle with their conscience after their desires have been accomplished. These battles with their conscience evoke empathy from the audience.

Don't use plagiarized sources. Get your custom essay on
“ Macbeth a tragic hero ”
Get custom paper
NEW! smart matching with writer

A Shakespearean Tragic Hero will always lose their life in the end of the play as a result of re-establishment of what is good in the play. In Shakespeare’s Macbeth, the title figure of the play can be seen as the Tragic Hero.

Macbeth’s growing character decays from a noble man to a violent individual.

When the play begins, Macbeth’s greatness is already established. Macbeth has already earned the title of Thane of Glamis and will soon become the Thane of Cawdor. The fact that he has these titles demonstrates to the reader that Macbeth is good and an important figure of responsibility.

They way in which he is addressed by the influential members of his country further informs the reader that Macbeth is respectable. However, after Macbeth interacts with the three witches, his curiosity is stirred by their prophecies, especially their prediction that he will become king. He commits murder in order to fulfill their prophecy and then returns to the three witches a second time for reassurance. The three witches, with the aid of three apparitions, then revealed to Macbeth in Act 5, Scene 1 the following prophecies:

Because of these predictions, Macbeth believes that no one can harm him. However, this is a false sense of security. Macduff, who was born by a Caesarean section and therefore was not born of woman, ultimately killed Macbeth, thus revealing that the witches predictions were only half-truths.

Macbeth’s good nature is increasingly defeated by one of his major flaws-ambition. His ambition and desire to become king leads Macbeth to take rash and sudden actions that are immoral. This includes ordering the murders of his friend Banquo and his son and Lady Macduff and her children, as well as personally handling the murder of King Duncan. His ambition is also displayed by his willingness to kill anyone who threatens his power.

Macbeth is largely influenced not only by the three witches, but by Lady Macbeth as well. Lady Macbeth encourages Macbeth to murder the king, Duncan. She helps plan out the murder and even offers to do it herself. When Macbeth changes his mind and decides not to carry out Duncan’s murder, Lady Macbeth questions his masculinity and love for her.

[We will proceed no further in this business.] …From this time such I account thy love. Art thou afeard to be the same in thine act and valor as thou art in desire? Woudst thou have that which thou esteem’st the ornament of life and live a coward in thine own esteem, letting “I dare not” wait upon “I would”, like the poor cat I’ th’ adage?…When you durst do it, then you were a man; And to be more than you were, you would be so much more than a man…They have made themselves and that their fitness now does unmake you…

After Lady Macbeth accuses him of acting like a coward, he agrees to continue with Duncan’s murder.

Macbeth is a prime example of a Shakespearean Tragic Hero. He is represented as a good man who, through his major character flaws- ambition and impressionability- falls from grace. After struggling with his conscience over the evil deeds he had committed throughout the play, Macbeth is killed and the rightful heir to the throne is restored to power. 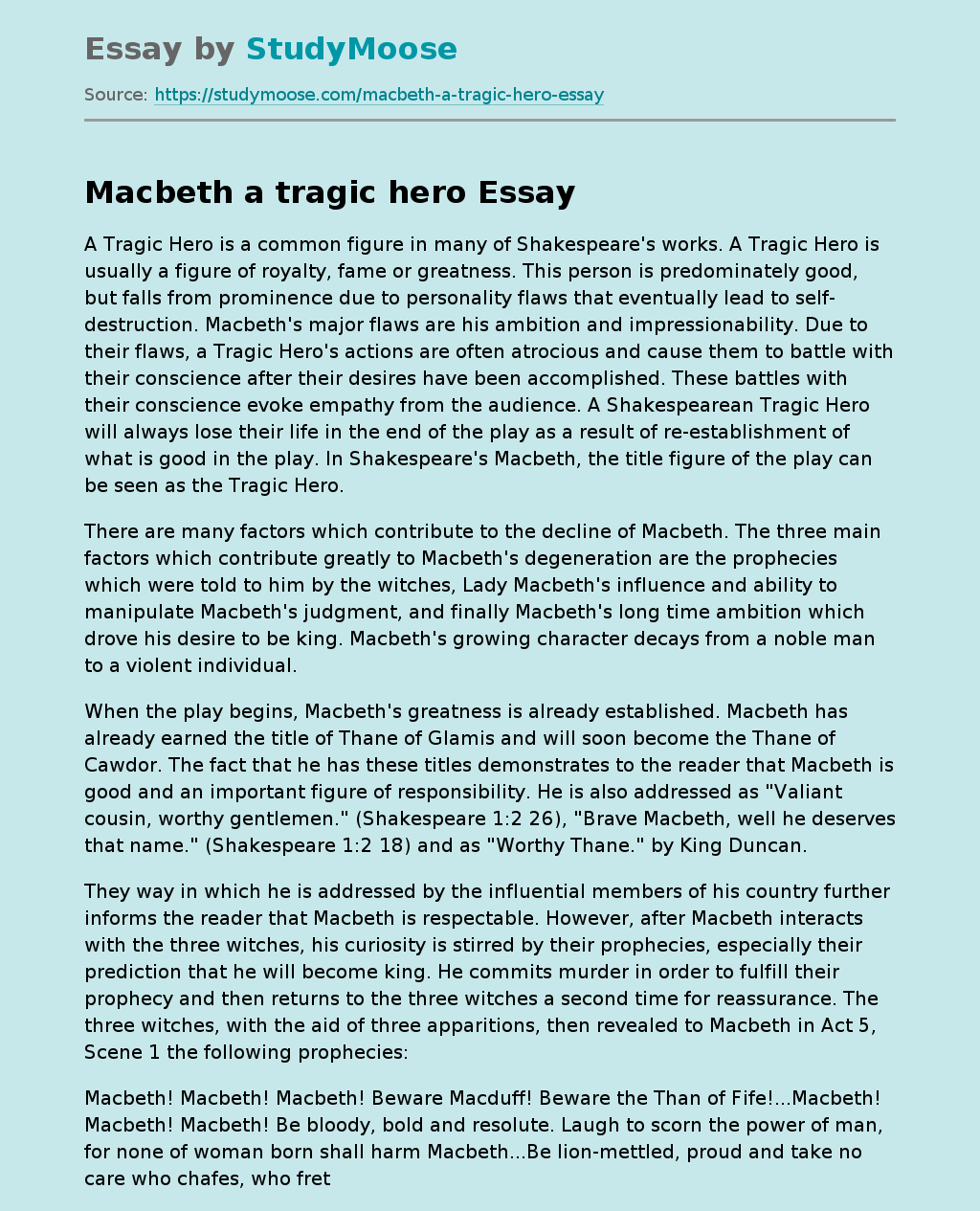