Incest is also a major theme in Greek Tragedy, most famously shown in Oedipus Rex by Sophocles. Eddie’s lust for Catherine and obsession with her become evident upon the arrival of Beatrice’s cousins, Marco and Rodolfo. Their role in the developing action reveals the true relationship between Catherine and Eddie and shows the audience that Eddie is anything but noble. Their arrival is also a catalyst in Catherine’s development from child to adult. Catherine shows immediate interest in Rodolfo, the younger brother, causing Eddie to become rapidly jealous.

Don't use plagiarized sources. Get your custom essay on
“ The Cambridge arts theatre ”
Get custom paper
NEW! smart matching with writer

This is the beginning of his change in character and her growing up and away from him. Immediately she sees Rodolfo, she says “(wondrously) How come he’s so dark and you’re so light, Rodolfo? “(page 17). From this we see that Catherine is still a child, but the potential for adult sexual attraction is there, too, and the audience senses trouble to come. Eddie never allows himself to contemplate that he could have feelings for Catherine other than those of a paternal nature, even when he is confronted by Beatrice.

The way Miller uses the arrival of Marco and Rodolfo to change the course of events suddenly and to reveal Eddie’s darker nature that will cause his inevitable demise is an example of the convention of peripeteia in Greek tragedy. Arthur Miller also takes the convention of harmartia – a fatal flaw in the hero – from Greek tragedy.

Eddie Carbone pays for his betrayal of Rodolfo and Marco, first with his downfall and the loss of his name and respect, then with his loss of the love of Catherine and finally with the loss of his life.

Eddie had a deep desire to retain his reputation and honour until his very end, but was his fatal flaw his pride that led him to betray Rodolfo or his love for his niece? His act of betrayal cannot be morally defended, but legally he does nothing wrong; in fact he acts as a law abiding citizen. Can we say that Eddie could have prevented his feelings from destroying him? He may be the adult compared to Catherine, but his feelings are of a very deep and strong nature. Should a man be punished for loving someone? These are cultural questions that Miller raises about the role of the father in the families of Italian immigrant communities.

Is the fatal flaw not in Eddie, but within the community and caused by the history of Sicily and the role of the Italian Mafia in America that are referred to by Alfieri in his opening speech. In using the concept of harmartia to expose the cultural and social weaknesses in a community that destroys its own people, Miller has used a Greek convention to make a modern tragedy. Alternatively, one could argue that the tragedy is caused by the conflict between trying to maintain traditional Italian values within a very different society, where individuals are driven by desire to achieve the American Dream.

Rodolfo and Catherine start to live the American dream, whilst Eddie and Marco cling to their Italian roots. Rodolfo buys American records and clothes as he prepares to settle in America, whilst Marco sends his money home to his family in Italy as is expected of a good Italian father. When Marco wants a traditionally Sicilian blood revenge against Eddie, Rodolfo argues with him for the first time and wants him to compromise so that he can have a future in America: “MARCO – In my country he would be dead now. He would not live this long. ALFIERI – All right, Rodolfo – you come with me now

RODOLFO – … Marco – promise the man. Please, I want you to watch the wedding. How can I be married and you’re in here? Please, you’re not going to do anything; you know you’re not. ” (page 58) In the lead character’s final moments he realises that he has lost everything, his name, the woman he could not have, but most importantly, Beatrice the one person who was always there for him. His anagnorsis becomes apparent in his last words, “My B.! “, these two words appear like an apology to his wife, the moment where everything become clear to him.

However, it would be an exaggeration to argue that he gains enlightenment or knowledge at the end and Alfieri tells us that his death was “useless” (page 64). Eddie’s self destruction is best shown when he demands that Marco should give him back his name, “I want my name! … Marco’s got my name -… ” (page 62), causing his own death by refusing to accept responsibility for what he has done. In the conventions of the tragic genre in Ancient Greece, comic relief was never used nor needed, but it was common in Renaissance tragedy.

In ‘A View from the Bridge’, the character Rodolfo, whilst seeming to give the audience some comic relief from the tragedy, also maintains an irreplaceable role as the character who allows and helps Catherine to blossom into a mature young woman. Moments such as when he sings “Paper Doll” to the Carbone family have amusing aspects to them. When Rodolfo performs to the family, Catherine becomes enthralled, as does most of the audience. Eddie however is not at all captivated by the sound of this “punk’s” voice.

He stops Rodolfo singing, claiming that he will be caught by the immigration bureau. However, the audience will recognise that Eddie does not like Catherine being so engrossed in the sound of another man’s voice. This is the deeper meaning behind Miller’s use of the song for comic effect. It is comical not only because of the lyrics of the song, but because of Miller’s choice of timing. It also suggests to the audience that to be caught by the immigration bureau will be Rodolfo’s fate, so comedy is used to warn of future tragedy.

In a production of the play by the Touring Consortium at the Cambridge Arts Theatre in December 2002, the actor playing Rodolfo used irony to reveal his nai?? ve character to the audience. Again, as in Greek tragedy, the audience knew what would happen to Rodolfo, whilst the flaw of naivety prevented him suspecting his fate. The basis of ancient Greek Tragedy is built upon the reaction of the audience, who should feel the pain, grief and fear of the protagonist. This is created through many dramatic devices used by the Greek dramatists.

Members of the audience are allowed to know the outcome of the story before any of the characters and they also see the motivations of the characters’ actions. In this way they are not only able to identify with the characters, but also to reflect on the causes of what has happened. Miller wants the audience to leave the theatre filled with new aspirations and a deeper knowledge of how human imperfection affects the very core of life. He wants his fellow men to evolve into something better by thinking about the issues in his play.

The Greeks felt that the audience was purified by the cathartic experience of sharing the tragedy and fate of the noble hero, but there is not the same idea that society can change that is important in Miller’s modern tragedy. Alfieri takes on the role of the chorus in a Greek play. From him we learn that there are two laws, the law of the country and a higher, natural law. He suggests that the first is limited whilst the second is morally superior and above the day to day concerns of the justice system.

In the Italian immigrant community respect goes to the powerful father figure. Marco and Eddie share the values of a natural law based on the ultimate sanctions of violence and death. Justice and power go hand in hand amongst people whose society is controlled by the Mafia. Alfieri introduces this idea at the beginning of the play in his first speech, when he says “In those days, Al Capone, the greatest Carthaginian of all, was learning his trade on these pavements, and Frankie Yale himself was cut in half by a machine gun on the corner of Union Street, two blocks away. 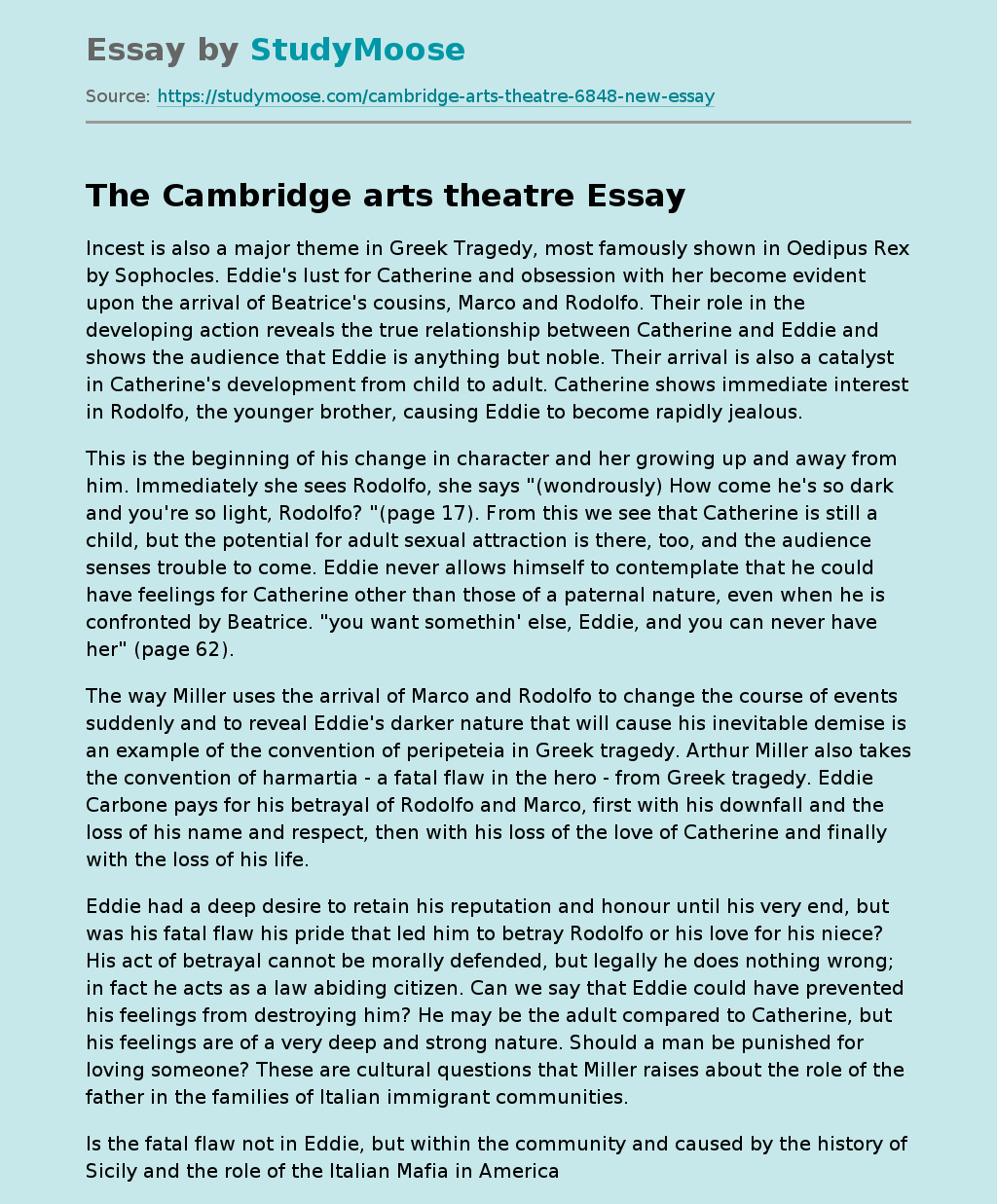