How Has Physical Theatre Changed Over Time?

Don't use plagiarized sources. Get your custom essay on
“ How Has Physical Theatre Changed Over Time? ”
Get custom paper
NEW! smart matching with writer

One of the early practitioners of physical theatre was Artaud. His ideas included total theatre, wherein actors appeal to all of the audience’s senses; he rejected the idea of the proscenium arch and directed his actors to use the space in different ways. It was also his view that in performance, all expression was physical expression. Whereas Steven Berkoff’s style incorporates actors using their whole bodies, including facial expressions to tell the audience the story, and actors using their bodies to create sound effects.

He is also a great believer in Le Coq’s seven states of tension, in this exercise the actor will move through seven different body states, starting off as exhausted and lazy and finishing in an the highest state of tension. The style of physical theatre can differ widely, but generally in a performance of physical theatre the audience would expect to see: elements of contemporary dance (fluid, graceful movements), detailed mime, as there are often limited props in physical theatre performances, complex lifts sometimes with several people, acrobatics and gymnastics and many fast-paced moments where actors will be stretching the limits of their bodies.

One of the first instances of physicality being used within theatres was by the Greeks, as they used a lot of mime and pantomime acts within their performances. The performance of pantomime originates from Ancient Greece, the first recorded pantomime actor being Telestēs in the play Seven Against Thebes by Aeschylus. Mime is used to give actors a way of portraying feelings, emotions, and entire stories through movement and expression, which helps in telling the overall story.

It gives a focus on expression and movement, and it takes away speech, which makes performers use their bodies and their faces to show to the audience what is happening, therefore making it physical theatre as the body is used rather than the voice. Around the 16th century, Italian theatre developed, what they called, Commedia dell’arte, which is a form of theatre characterized by masked “types” which began in Italy in the 16th century. The Commedia dell’art characters first began to appear in English plays around 1660. This style of theatre has three important aspects to it; mask, music and costumes. The audience was able to pick up from each character’s dress the type of person he was representing. For example, loose–fitting garments alternated with very tight, and jarring color contrasts opposed monochrome outfits. Males would identify themselves with character-specific costumes and half masks and all the fixed character types, the figures of fun or satire, wore colored leather masks. Today in Italy handcrafted theatre masks are still created in the ancient tradition of carnacialesca (carnival).

Commedia dell’arte is classed as physical theatre as masks forced actors to project their characters’ emotions through the body. Leaps, tumbles, stock gags, obscene gestures and slapstick antics were incorporated into their acts. Pantomime (informally panto), is a type of musical comedy stage production, designed for family entertainment. The origins of pantomime go back to ancient Rome, and was developed in England to generally be performed during the Christmas and New Year season. Modern pantomime includes songs, slapstick comedy and dancing, employs gender-crossing actors, and combines topical humour with a story loosely based on a well-known fairy tale. It is a participatory form of theatre, in which the audience is expected to sing along with certain parts of the music and shout out phrases to the performers. The development of English pantomime was strongly influenced by commedia dell’arte. This was a “comedy of professional artists” travelling from province to province in Italy and then France, who improvised and told comic stories that held lessons for the crowd, changing the main character depending on where they were performing.

Pantomime mainly incorperated song, dance, buffoonery, slapstick, cross-dressing, in-jokes, topical references, audience participation, and mild sexual innuendo. The general movement within Pantomime creates physical theatre as the storyline is presented to the audience mainly through lifts, dance and slapstick, although performers also use their voice throughout. The Theatre of the Absurd is the name for particular plays of absurdist fiction written by a number of primarily European playwrights in the late 1950s, as well as one for the style of theatre which has evolved from their work. Their work expressed what happens when human existence has no meaning or purpose and therefore all communication breaks down, alerting their audiences to pursue the opposite. The Absurd in these plays takes the form of man’s reaction to a world apparently without meaning, and/or man as a puppet controlled or menaced by invisible outside forces.

Theatre of the Absurd consisted of horrific or tragic images; characters caught in hopeless situations forced to do repetitive or meaningless actions; dialogue full of clichés, wordplay, and nonsense; plots that are cyclical or absurdly expansive. The term “Theatre of the Absurd” was coined by the critic Martin Esslin, who made it the title of a book on the subject first published in 1961. The “Absurd” or “New Theater” movement was originally a Paris-based form of theatre, tied to extremely small theatres. There are many conventions of “absurd” theatre, such as words often appearring to have lost their denotative function, thus creating misunderstanding among the characters. Instead, language gains a certain rhythmical, almost musical quality; no plot, minimal staging, babbling; abstract setting, “It is sometimes said to express the ‘human condition’ in a basic or ‘existential’ way” (Worthen 1639). Pirandello, one of the first experimentalists, wanted to bring down the fourth wall that was created by Realism, thus creating more physicality and a deeper connection with the audience.

Modern physical theatre has grown from a variety of origins. Mime and theatrical clowning schools, such as L’Ecole Internationale de Theatre Jacques Lecoq in Paris, have had a big influence on many modern expressions of physical theatre. Practitioners such as Steven Berkoff and John Wright received their initial training at theatre schools just like this. Contemporary Dance has also had a strong influence on what is regarded as physical theatre, partly because most physical theatre requires the performers to have a level of physical control and flexibility. This is rarely found in those who do not have some sort of movement background. Modern physical theatre also has strong roots in more ancient traditions such as Commedia dell’arte and some people suggest this links to the ancient greek theatre. Eastern Theatre traditions have influenced a number of practitioners who have then influenced physical theatre. A number of Oriental traditions have a high level of physical training, and are visual masterpieces. Antonin Artaud was fascinated with the energy and visual nature of Balinese theatre and wrote extensively on it.

He admired Eastern theatre because of the highly ritualized and precise physicality of Balinese dance performance, and advocated what he called a “Theatre of Cruelty”, which he used to create physical theatre within performances and to describe a form of theatre that he hoped would unleash unconscious responses in audiences and performers that were normally inaccessible. Another physical theatre practioner, Steven Berkoff, used techniques such as background movement, repetitive actions, and mime to explore further the ways in which he approaches exchanges between two characters. Berkoff said that it was important “to see how I could bring mime together with the spoken word as its opposite partner, creating the form and structure of the piece”. Berkoff also used a theory he called Total Theatre, which is key to him and stemmed from Artaud’s theatre style. Total Theatre maintains that every aspect of theatre must have purpose: every movement, that is choreographed; to each line, that is learned perfectly; to each lighting effect, that is used to convey a mood or message; to each sound effect, that enhances the audience’s experience; to each prop that has a use.

The aim of Total Theatre is to create extreme moods to give the audience an overwhelming experience and to shock, amuse, scare, or amaze them. As a result of Total Theatre, performances are often minimalist, with bare stages and little language so that the focus remains on the physical movement and not on all the effects or the creation of a scene. This serves to detach the audience from the play and make them think about what was being said. However, from 1911 to 1916 Stanislavski, proposed that actors study and experience subjective emotions and feelings and perform these experiences to audiences by physical and vocal means. While in the early stages his ‘system’ focused on creating truthful emotions and embodying them, even though he later worked on the Method of Physical Actions. Its focus was on physical actions as a means to access truthful emotion, and involved improvisation. The focus remained on reaching the subconscious through the conscious. In other words, he wanted the performer to focus internally to portray a character’s emotions onstage.

Later, between 1934 and 1938, this technique evolved to a method of physical actions in which emotions are produced through the use of actions. From Greek theatre to modern day, physical theatre has been used by many different practitioners and theatre groups for one sole purpose; to impact the audience. On one hand, the mime and Commedia dell’arte that the Greeks first developed is still used widely today; mime is still an extremely popular form expression within plays, and commedia dell’arte is still extremely popular in creating humorous performances using masks, and over-exaggerated costumes. Similarly, pantomime is still one of the most popular forms of theatrical entertainment used across the world, achieving physical theatricality by including slapstick, lifts and dances, occasional mask work and costumes. This is effective as it provides the audience with the storyline in a less conventional and, arguably, more interesting way.

It intrigues the audience, and makes them feel more emotionally connected with the characters involved in the performance, especially when the performers break the fourth wall, which frequently happens during pantomimes. However it can also be argued that many things have changed as time passed in regards to physical theatre. As technology advanced, the use of lighting and special fx have made creating a dramatic and intense atmosphere easier. Breaking the fourth wall is also a new idea, as the Greeks and Romans believed that the audience should not be included in the performance, and should purely be onlookers, whereas Artaud and Stanislavski believed that by bringing the audience into the performance, it would not only make it more intense and engaging, it would also achieve the “attacking the senses” criteria that Artaud believed in, by using “in yer face” theatre to scream and shout in the audience’s face. Physical theatre as it is used today, is still very popular with both performers and audiences, as it is both entertaining to watch and perform.

How Has Physical Theatre Changed Over Time?. (2016, May 31). Retrieved from https://studymoose.com/how-has-physical-theatre-changed-over-time-essay 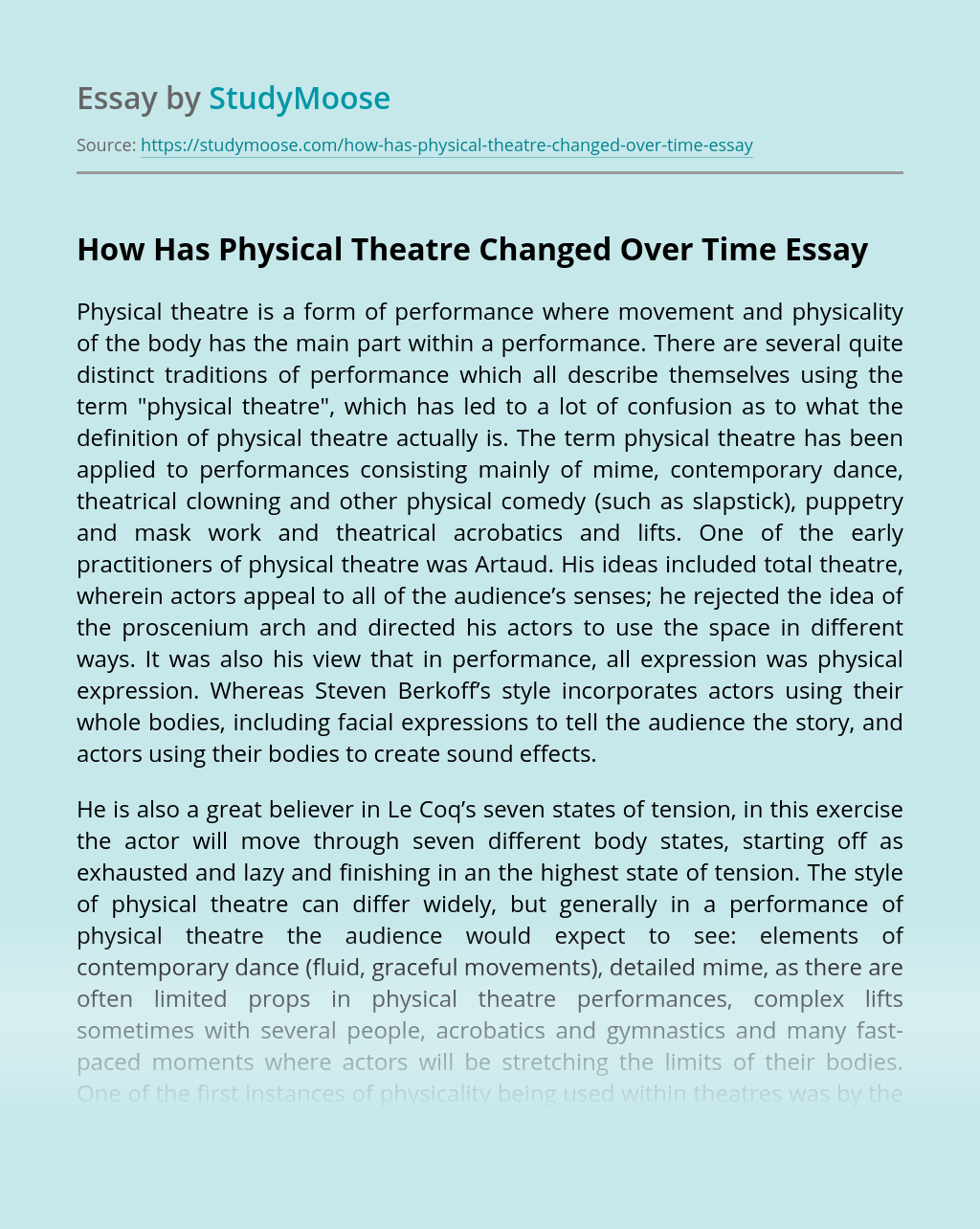