Function of Music in Theatre

QUESTION #1 Discuss the dramatic functions of music in two works of Music Theatre, including some consideration of the relationship between music and other elements of the performance event.

Music and drama have the capability of not only integrating to create spectacular visual and aural events in theatre, but they have a distinct capacity to support each other – to heighten one-another to innovative, intrepid and even excessive levels. These levels reached are rarely paralleled in real life, at least not as effortlessly as they are in musical theatre.

It seems that in some cases, the two elements aren’t complete unless they form a relationship – just as hydrogen and oxygen bond to produce water.

The aim of this document is to hold a metaphorical magnifying glass over two individual pieces of drama: Lionel Bart’s music in ‘Oliver!’ and Elliot Goldenthal’s music in ‘Final Fantasy: The Spirits Within’.

The two pieces of drama are poles apart when relating the plots, themes, settings and a great many others, but although the two works have over 30 years between them in production, there are particular conventions to be found within the composition of their music scores, which both illustrate the effectiveness of the basic systems in music to develop the drama, and the revolutions occurring in the new generation of drama for today’s new generation of audience.

Although the music analyzed in this report can be easily disregarded by the audience as ‘backdrop’ music, there is a much deeper and arousing basis to the composer’s production of this music, which is there for much more than
simply saying to the audience “This is where the character is”. ‘The great composers were fully aware both of the thematic principle and of the technique through which they materialized it.” – (Reti, 1961) The music used in these examples were not used simply for a pleasing auditory ‘spanner in the works’, but to achieve a new level of understanding especially from the point of view of particular characters. The music of the composers Bart and Goldenthal, successfully achieves a more intense portrayal of their characters featured, through the use of both subtlety and supplement.

‘Oliver’ will be the main focus for the initial component of this report, so that the two pieces of drama can be analyzed chronologically. ‘Oliver!’ is a musical interpretation of Charles Dickens’ ‘Oliver Twist’ and is a tender account of an orphan boy who runs away from the orphanage and journeys to London. He endeavors to “pick-a-pocket-or-two” for his new lodger Fagin, but gets caught. As Fagin tries to save him, Oliver decides that all he wants now is go to his newly discovered uncle, and live a good life. Oliver premiered on Broadway in January of 1963 and ran for 774 performances. It was converted into a film later that decade and subsequently won 6 academy awards including best picture for 1968. Throughout the duration of the Musical, the audience is drawn into Oliver’s world – hauled into his story through the use of melody and song.

The initial scene where Oliver Twist first enters London is a defining component of the Musical, where (in film version) you see him gaze adoringly out at the clock tower above from underneath a dozen cabbages – the symphony slowly building as he pulls together the impulse to jump out form the basket and then stumble out into the middle of the street to view this living, breathing city before him. The music now escalates at this point and creates a strong resonance whilst he gawks with innocence and naivety at every moving spectacle around him. A brass fanfare erupts in unison with Oliver’s eruption from the basket and strongly accompanies the other sounds of the city such as the hustle and bustle of loaded carriages, trains blasting their whistles, people rich and poor alike scurrying about busily like ants – oblivious to the music unlike Oliver.

This scene captures almost every conceivable aspect of the city from Oliver’s eyes and packs it tightly into song with The Artful Dodger’s swift introduction, reception and invitation in the song “Consider Yourself”, at which point he takes Oliver on an excursion around the busy city. A humorous contrast is provided here in this scene – where Dodger sings the lines “Consider yourself at home, consider yourself one of the family” whilst at the same time, both he and Oliver are being scrutinized by policemen and chased by merchants as they weave and bob their way through the immeasurable stream of dancing butchers, grocers, paperboys, fishmongers, etc.

Soon after this scene, Fagin gives Oliver a lesson on how to “Pick a Pocket or Two”. The music in this scene is lighthearted and comedic but offers many subtleties to be investigated, such as the deep brass used to convey the sense of danger, the sense of capture or discovery, but the underscore of flutes happily tooting away at Oliver’s new found conception that the art of thievery is all just a game – not something evil or punishable at least.

Interestingly, when you meet up with the character Bill Sikes (a fiendish henchman with a violent and deadly temper) there is an immediate shift in music, just as if his entrance creates a wind that pushes the high-spirited music out of the room to make space for his deep, rich and threatening score.

Although Oliver is a high-spirited production, there are strong hints of the dilemmas of poverty and violence brought into three dimensions with song, but more contemporary dramatic works have required more than these fundamental methods to bring the characters and scenes to life – literally.

‘Final Fantasy: The Spirits Within’ was released as a full-length feature film in 2001. This feature however was different to any other as the entire film was animated. The story of ‘Final Fantasy’ is set in the year 2065 where the remaining inhabitants of earth are locked in a battle to take back the Earth from marauding alien invaders. Led by a strange repeating dream, Dr. Aki Ross may be the only one who can save the human race from extinction. Elliot Goldenthal was provided the challenge of bringing the synthetic characters to life through his musical composition.

‘There seemed to be only one logical answer for me, which was to amplify the humanness in any place that was dramatically possible. I wanted to treat the character’s emotional interactions, for example, as one would treat them in normal drama, with a lyrical sweeping melody.’ (Goldenthal, 2001).

Performed by the London Symphony Orchestra, Goldenthal’s music for ‘Final Fantasy’ attempted at every point to bring life to the characters in the story both emotionally and physically. This is evident in the very first scene of the film where the audience is introduced to Aki, when she is having her repeated dream. The introduction of the accompanying piece is led by the sound of a glass harmonica to convey the potential sensitivity and fragility of Aki’s character.

She wakes from the dream and finds herself on her spacecraft, revolving across the surface of the earth. In the next scene, she descends to earth accompanied by an almost military fanfare of brass and strings coming together on a strong Eb chord, giving a feeling of purpose and decision to this descent. Her ship touches down on the desolate, empty streets of New York, and the music instantly stops in a parallel with the apocalyptic emptiness of the long-dead city.

Further on in the movie, Aki’s love interest Gray Edwards becomes critically infected by one of the aliens and is given only a matter of minutes to live unless treated immediately. Aki is forced to work against time in an attempt to save Gray, The dramatic tension in this scene is heightened by Goldenthal’s Score “Code Red”, composed basically of intense strings and strong percussion symbolizing a clock, and also signifying the value and importance of time. The music steadily builds in pitch, volume and intensity as the timer next to the operating table nears 0:00, but the tempo remains the same due to the fact that the time on the clock cannot speed up or slow down. At the climax of the scene, Aki saves Gray with only seconds to spare and as soon as the operation finishes the music abruptly ends, leaving the audience somewhat temporarily suspended in a moment of heightened tension.

In a later scene, Gray and Aki are engaged in a private conversation where Aki speaks of a terminally ill eight-year-old girl she once spent time with before her death. In this scene where Aki reveals her emotional vulnerability for the first time, Goldenthal chose for this to be the first moment in the film where a piano is used. He decided on this due to the fact that the characters are so far away from any type of home in a desolate land, instead of going high-tech, a more earthy instrument is needed, something not basic, but elementary in musical design. The piano in this scene reminds the audience of home and connects the animated characters with images of a soft and sympathetic reality.

A scene later in the film shows General Hein, (the villain of the film) in his office speaking of how his wife and child were killed by the aliens. Throughout the earlier scenes of the movie, the General is composed in a gloomy light, but in this particular scene, he is viewed musically in a sympathetic light. The music is tender and wistful as he unconsciously shows why his contempt for the aliens proves to cloud his judgment. There is a reference in the music that although there is compassion within this character, it is somewhat suppressed to an almost dormant state, overshadowed by hate and resentment.

‘We must always rely on the music as our guide toward our understanding of the composer’s conception of the text. It is this conception, not the bare text itself that is authoritative in defining the ultimate meaning of the work.’ (Kerman, 1989).

The function of this music being strategically used in drama is for the benefit of the audience not only because it has the ability to paint a scene, but it also opens up the dialogue and opens up the characters and lets the audience see what is going on inside of them. The function is ‘to supply certain kinds of meaning to the drama, meanings that enrich immeasurably, and enrich dramatically, and that cannot be presented in any other way’ (Kerman, 1989).

Drama alone can hopelessly attempt to convey some of the aspects of life that
music can convey in just a few notes, and music can ridiculously hope to fulfill all the needs of a script without any real actions or dialogue, but in the end, the two combined provide an infinite array of possibilities and interpretations to be searched.

In conclusion, if the composer is faced with the challenge of creating music to accompany drama, there is no unambiguous method of composition that one has to follow, but the impartiality between the two elements requires a strong correspondence at every point where they meet, or else the implication, sensation or meaning you are trying to convey will become caught in some redundant crossfire and the audience will lose the chance of gaining something extra from a piece of theatre capable of reaching outside of it’s three dimensions.

Function of Music in Theatre. (2016, Mar 21). Retrieved from http://studymoose.com/function-of-music-in-theatre-essay 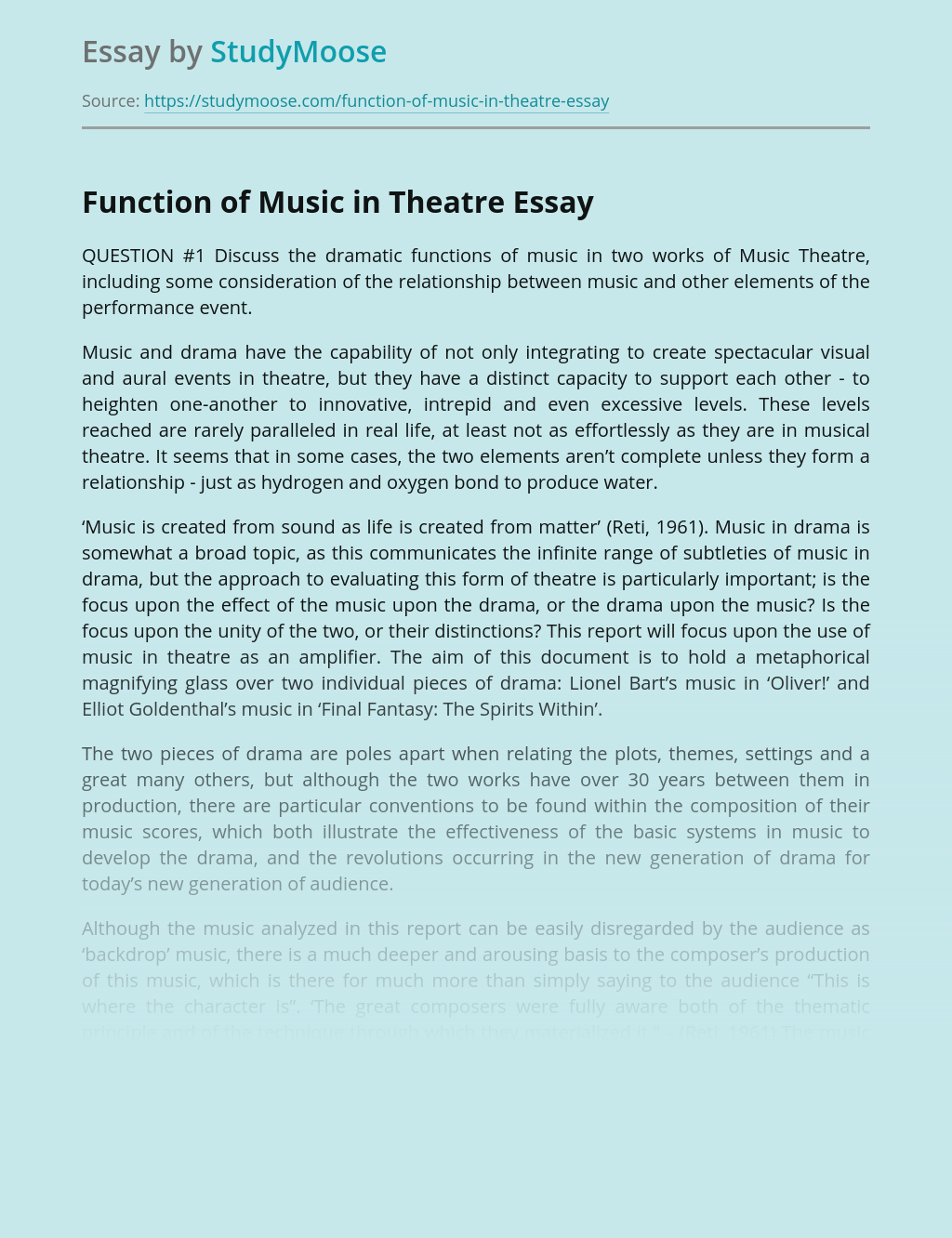 Don’t waste time
Get a verified expert to help you with Function of Music in Theatre
Hire verified expert
$35.80 for a 2-page paper
Stay Safe, Stay Original