Calvin Richard Klein was born and raised in New York City’s borough of the Bronx. He decided he wanted to be a fashion designer at an early age, most probably as a result of the influence of his grandmother. Leo and Flora Klein were his parents. They both worked in the grocery business. Flora’s mother, Molly Stern was an accomplished seamstress. She operated a notions shop and tailoring business where Calvin spent a lot of time as a child.

Don't use plagiarized sources. Get your custom essay on
“ Calvin Richard Klein ”
Get custom paper
NEW! smart matching with writer

(Marsh) Calvin attended P.S 80, a public school that a lot of other famous people attended including Penny and Gary Marshall and Ralph Lauren. (Marsh) At P.S 80 he excelled in art and drawing and upon graduation went to the High School of Industrial Art. After that he attended the Fashion Institute of Technology. (Marsh) After graduating from the Fashion Institute of Technology in 1963, he worked for women’s coat and suit manufacturers in Manhattan’s garment district before opening his own business in 1968.

He did not study with any other notable designers but he relied on his childhood friend Barry Schwartz for career advice. Schwartz loaned him $10,000 in start-up funds and joined the firm a month later, after the family supermarket in Harlem that Schwartz had inherited was gutted in the riots that followed the assassination of Martin Luther King. (Int’l Directory) Klein rented an unimpressive showroom to exhibit a small line of samples. His big break came when a vice-president at Bonwit Teller stopped at the wrong floor of the building, liked what she saw, and invited Klein to bring his samples to the president’s office.

Klein wheeled the rack of clothes uptown personally. She placed an order for $50 thousand, which was a huge amount at that time. Encouraged by favorable reviews from the fashion press and the support of store executives, Klein expanded his line to include women’s sportswear. Bonwit’s gave the merchandise incredible exposure, with window displays in its flagship Fifth Avenue store and full page advertisements in the New York Times. Soon after, Calvin Klein was bombarded by orders. The fledgling company booked $1 million worth of business in its first year, reaching sales volume of $5 million by 1971. (Int’l Directory)

Klein’s world soon included his couture line, Calvin Klein Collection for men and women, CK sportswear for men and women, and CK jeans. He also licensed arrangements for his menswear, coats, accessories, intimate apparel, hosiery, swimwear, eyewear, furs, socks, and fragrances, all under his careful control and management. (Gaines) Of the many categories licensed, denim jeans, along with fragrances, built a large following among consumers, who sought an affordable way to attain the Calvin Klein look. By 1997 sales of Calvin Klein Jeans approached half a billion dollars. (Gaines) Advertising was the key to Klein’s success. He kept the media talking about him by creating controversial ad campaigns. He was the first to design women’s underwear that looked like men’s jockey shorts.

His television ads for jeans starred Brooke Shields (1965–), who proclaimed: “Nothing comes between me and my Calvins.” (Marsh) Klein developed a reputation for pushing the boundaries of acceptability in his campaigns. Ads of the mid-1990s featured young teenagers in provocative poses that many regarded as socially irresponsible. Klein eventually cancelled these ads, but not before the accompanying publicity had made the Calvin Klein brand name a part of everyday conversation.(Gaines) Klein’s three major fragrances, Obsession, Eternity, and Escape, were huge successes, also due in part to sexually-suggestive advertising. Advertising for his fragrances, CK One and CK Be, continued to challenge the public. Some ads showed teens taking part in what some regarded as an idealized drug culture. At this time, President Bill Clinton (1946–) admonished the fashion industry not to glamorize addiction. Klein replied that these ads represented a departure from phony airbrushed images that were not connected to the reality of today’s world. (Gaines) Klein’s design philosophy is rooted in minimalism.

This is what he is known for. He typically uses neutral colors or earth tones and designs separates that work in many different ensembles, from day to night and season to season. At the same time his advertising for jeans and fragrances was being criticized, Calvin Klein clothing was receiving critical acclaim for its clean, modern lines. (Gaines) Time magazine named Klein one of the twenty-five most influential Americans in 1996. Klein won the prestigious Coty Award three times in a row (1973–1975), becoming the youngest designer to ever have that honor. In 1982, 1983, and 1986 he also captured the Council of Fashion Designers of America Award. In addition Klein built a financially strong company with the continued advice and help of partner Barry Schwartz, who guided the company through tough financial times in the late 1980s.

Few designers have rivaled his worldwide empire. (Gaines) In late 2002, Calvin Klein, Inc. caught the eye of Phillips-Van Heusen Corporation (PVH), a company looking to acquire a major brand. As the largest shirt maker in the United States, PVH owned the Van Heusen, IZOD, and G.H Bass brands and had licensing agreements with Geoffrey Beene, Arrow, DKNY, and Kenneth Cole. Under the leadership of CEO Bruce Klatsky, PVH made a play for Calvin Klein and eventually won the battle. Under the terms of the deal, Klein remained a design consultant for Calvin Klein, Inc. while PVH retained 100 percent ownership of the firm. The $430 million cash and stock deal also included royalty payments to Klein through 2018. Completed in February 2003, the acquisition marked a new era for the brand.

For the first time, Klein did not have complete control over the products sold under his name, and his partner Schwartz had retired. (Int’l Directory) Currently, Francisco Costa is the women’s creative director of Calvin Klein collection. He came to New York from Brazil in 1985 and spoke no English. He worked during the day and went to school at Hunters College, then FIT. He won the CFDA award for womenswear designer of the year in 2006. He took over creative leadership of Calvin Klein in 2004. (Vogue UK) Calvin Klein’s charitable contributions include donating to the Calvin Klein Foundation.

It has distributed nearly $200,000 to charities including the Gay Men’s Health Crisis Center in New York. He has also donated $2 million to the Fashion Institute of Technology (FIT) in New York. This is the largest gift received to date from an FIT alumnus. Calvin Klein, Inc. now owned by Philip Van Heusen matched this donation by donating $1 million to FIT. The funds will support the college’s annual spring runway show, which showcases the capstone designs of students about to graduate with a Bachelor of Fine Arts (BFA) degree in Fashion Design. (bwf.com) 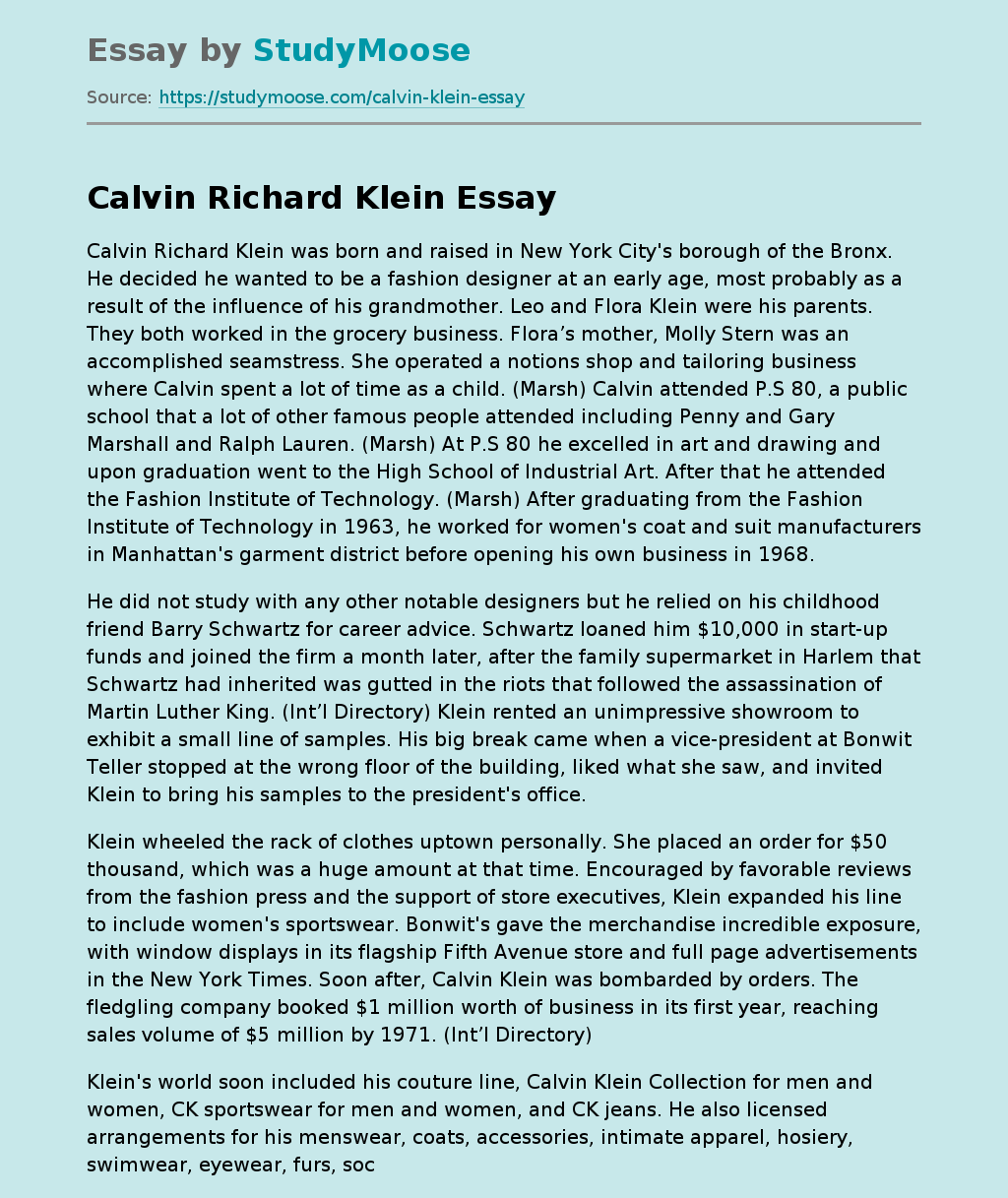