Corrections in the Philippines started during pre-colonial times when the task was community-based. It was only during the Spanish regime that an organized corrective service was made operational. The main penitentiary was the Old Bilibid Prison at Oroquieta Street in Manila which was established in 1847. It was formally opened on April 10, 1986 by a Royal Decree. About four years later, on August 21, 1870, the San Ramon Prison and Penal Farm in Zamboanga City was established to confine Muslim rebels and recalcitrant political prisoners opposed to the Spanish rule.

The facility which faced the Jolo Sea had Spanish-inspired dormitories and was originally set on a 1,414-hectare sprawling estate. When the Americans took over in the 1900s, the Bureau of Prisons was created under the Reorganization Act of 1905 (Act No. 1407 dated November 1, 1905) as an agency under the Department of Commerce and Police.

It also paved the way for the re-establishment of San Ramon Prison in 1907, which was destroyed in 1898 during the Spanish-American War. It placed under the auspices of the Bureau of Prisons and started receiving prisoners from Mindanao.

Before the reconstruction of San Ramon Prison and Penal Farm, the Americans established in 1904 the Luhit Penal settlement (now Iwahig Prison and Penal Farm) on a vast reservation of 28,072 hectares. It would reach a total land area of 40,000 hectares in the late 1950s. It was located on the western most part of the archipelago far from the main town to confine incorrigibles with the hope of rehabilitation. The area was expanded to 41,007 hectares by virtue of Executive Order No.

67 issued by Governor Newton Gilbert on October 15, 1912. Other penal colonies were established during the American regime. On November 27, 1929, the Correctional Institution for Women (CIW) in Mandaluyong City was created under Act No. 3579 while the Davao Penal colony in Southern Mindanao was opened on January 21, 1932 under Act No. 3732.

The CIW was founded to provide separate facilities for women offenders. To date, there are two Correctional Institutions for Women, the one mentioned in Mandaluyong and the other one is located in Davao Prison and Penal Farm in Dujali, Davao Del Norte. Owing to the increasing number of committals to the old Bilibid Prison in Manila, the New Bilibid Prison was established in 1935 in the southern suburb of Muntinlupa City. The old prison was transformed into a receiving center and a storage facility for farm produce from the colonies. It was later abandoned and is now under the jurisdiction of the Public Estates Authority. After the American regime, two more penal institutions were established.

Of these prison satellites, the New Bilibid Prison in Muntinlupa City as the Central Office serves as the main penitentiary as the Central office is also located in there. As of August 2012, the total population of prisoners confined in all satellites of the BuCor is 20,000. It is at this juncture, that handling, managing and taking care of the records of these inmates are of complex types of work which have to be performed by the competent personnel assigned at the “Inmate Document and Processing Division.” 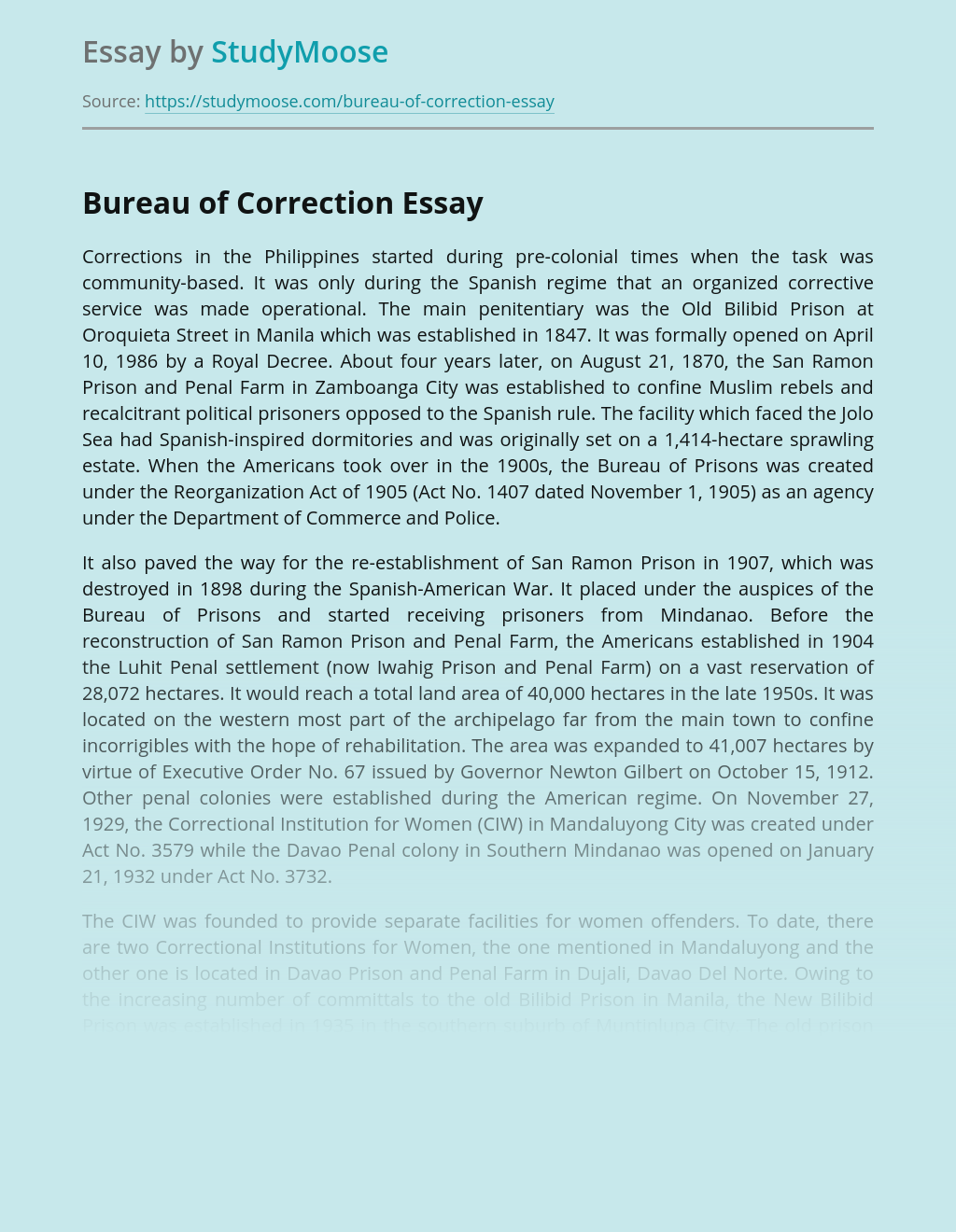