Bullying in the Philippines Essay

Don't use plagiarized sources.
Get Your Custom Essay on Bullying in the Philippines Just from $13,9/Page

It can really make us wonder how a country we thought of as Bully-free can produce such acts of hate towards another. If people can bully others to this extent even the public’s eye, what about during their everyday lives where they are unsupervised and much freer to do whatever they want, whenever they want to do it; whether it is in the workplace, home, and in this study’s case, at the school.

This study will focus on that.

The purpose of this study is to develop a deeper understanding of the effects that in-class bullying can have on a high school teenager. It is important to study this issue because school is one of the foundations of the formation of an individual’s character. A major challenge confronting DepEd here in the Philippines is the rising number of cases of in-class bullying in the country despite their efforts to stop the occurrence of In-Class Bullying. Sotto, Lao, and Salvosa were all greatly affected by the bullying. Salvoso and Lao were greatly depressed by the verbal attacks, Sotto even created a law against it. If these three victims were really shaken by the bullying, what about the other people who go through bullying every day in their neighborhood, in the workplace, and in school? What about the children in school who also experience this every day? If three grown adults are all affected by this, how much greater does it affect the kids who are still developing their intellectual and emotional quotients? This will be the focus of the study, and the following questions will be answered: 1.) How much of their self-concept is affected by the bullying? 2.) What actions do these teens consider as bullying?

3.) Are there other factors that affect the development of the Self-Concept other than bullying? 4.) How much of their self-concept has changed over the period of time that the individual has been bullied? 5.) How do the teens cope with the bullying?

The study will aim to discover more about how bullying schools affect the formation of one’s self-concept. It will help us in analyzing the effects, thus giving us more ways to deal with it. The research will help open a new dimension of understanding for bullies, parents, and most importantly, the victims themselves, on how to approach the issue of bullying in schools and it will help pave the way in developing a better idea of how to handle a bullying situation. This study will also help us see how big an issue bullying has become here in Baguio city.

In order to accomplish these objectives, a survey and a conversational analysis of interviews will be carried out. The survey’s aim is to formulate a universal definition of what the students deem as “bullying”, while the interviews will help the study determine how the students are affected by in-class bullying.

Bullying is becoming a rather big issue here in the Philippines and this study will help us understand the gravity of the issue that in-class bullying gives. There have been many cases of bullying here in the Philippines, even if we exclude the cyber-bullying cases. The Department of Education has even released a statement about the alarming increase of bullying cases in the country. It is imperative to know why this is happening and how it can be mitigated.

The significance of this study is that it may help researchers may use this research’s findings as basis a related research topic. This study might even encourage these future researchers to delve deeper in the issue and create a more detailed and in-depth version of the research topic. It will also serve as basis in the study of the issues related to bullying, the self-concept, and the interpersonal communication patterns of individuals. The study will also provide more in-depth view of the issue of bullying because it focuses on a condition vital to the formation of one’s self-concept. Through this study, students will become aware of the great effects that bullying can have on others and this can help reduce the occurrence of sever bullying cases. Finally, the results of this study will provide some insights and information on how much bullying can change an individual’s view of himself/herself, how it can affect the way they interact with others, and how it can change their view of the world they live in.

The scope of the study will focus on 3rd year – 4th year male and female high school students in Baguio city who are enrolled in schools here in Baguio. These schools are the University of Baguio Science High School.

Bullying in the Philippines. (2016, Dec 16). Retrieved from https://studymoose.com/bullying-in-the-philippines-essay 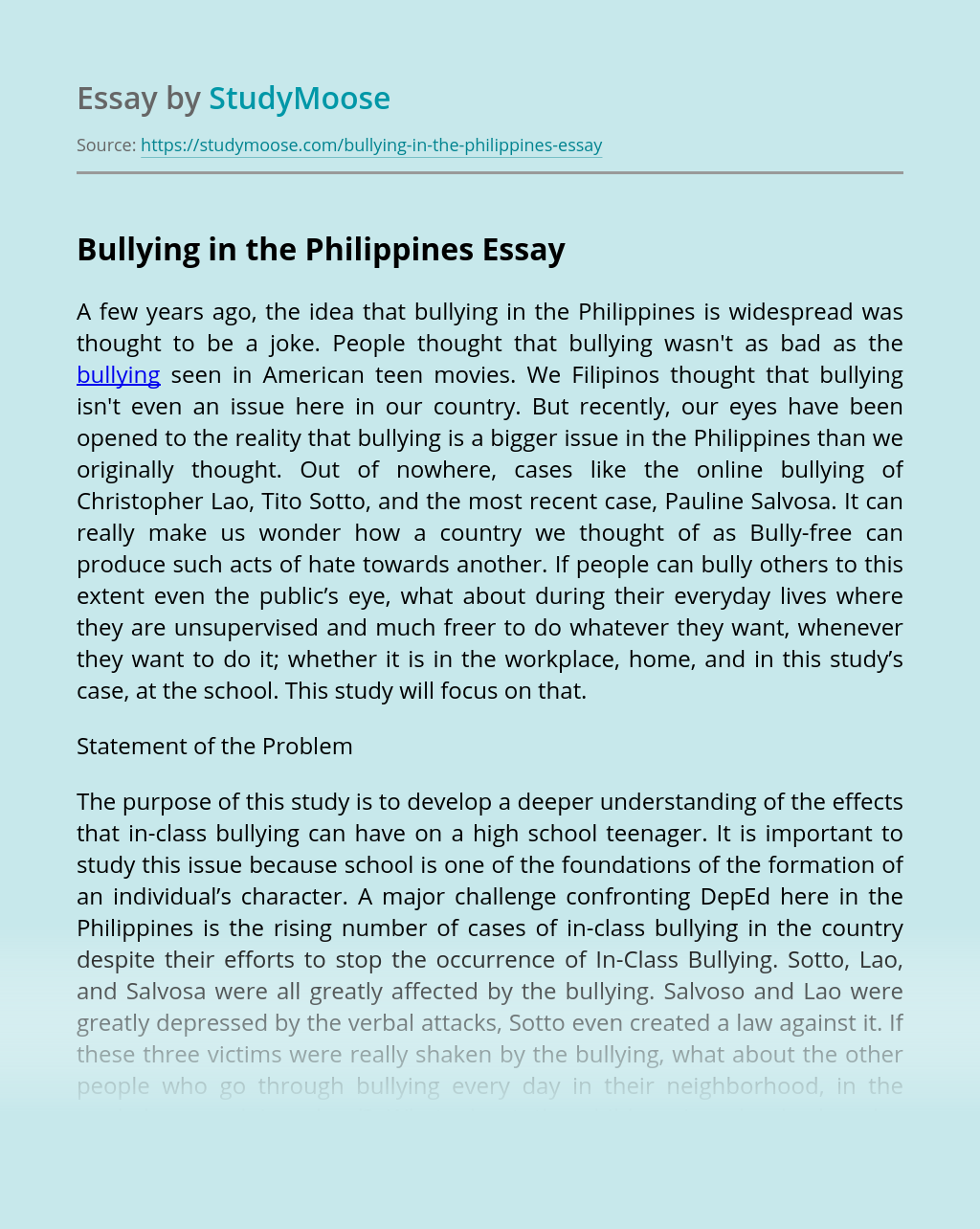 Concept of Education in Islam and Its Objectives

The Arabic language has three terms for education, representing the various dimensions of the educational process as perceived by Islam. The most widely used word for education in a formal sense is ta’līm, from the root ‘alima (to know, to be aware, to perceive, to learn), which is used to denote knowledge being sought or... VIEW ESSAY

Victor who comes from a household with money, is set up to marry Victoria a woman from a household without money Both are worried since they have never ever fulfilled Victoria’s moms and dads inform her that marital relationship has absolutely nothing to do with love and it is collaboration where both partners have something... VIEW ESSAY

THE NEW INTELLIGENT ENTERPRISE Some of the best-performing retailers are using analytics not just for finance and operational activities, but to boost competitive advantage on everything from displays, to marketing, customer service and customer experience management. Big Data, Analytics and the Path From Insights toValue How the smartest organizations are embedding analytics to transform information... VIEW ESSAY

Although slavery greatly restricted the ability of Africans in America to practice their cultural traditions, many practices, values and beliefs survived and over time have incorporated elements of European American culture. There are even certain facets of African American culture that were brought into being or made more prominent as a result of slavery; an... VIEW ESSAY