A lot of leisurely items to date have been somewhat remodeled or refashioned into something that is more cost-friendly for consumers. These are counterfeited items, more popularly known as “pirated” goods, which are illegal, as authorities would suggest. However, there are a growing number of consumers for pirated goods, especially in developing or underdeveloped countries; even developed countries have their share of consumers of pirated goods. In the fashion industry, most apparels (e.g., T-shirts, pants, blouses, etc.) and textiles are apparently being produced in many developing countries—some underdeveloped—as the multinational conglomerates believe that labor is cheaper in these places.

Don't use plagiarized sources. Get your custom essay on
“ Branded? Fashion Counterfeiting ”
Get custom paper
NEW! smart matching with writer

These countries, in turn, have benefited from the decision of many multinational conglomerates: “The clear winners given all of these industry trends are China and India with their long history in textiles, Pakistan with its current capacity for textile production” (Mead 423). With the production of apparels and textiles shifting from the developed regions like the United States and Europe to underdeveloped or developing countries, it would be so hard to assume that the occurrence of counterfeiting these products will be low.

The consumers that could not seem to afford the expensive prices of high-end brands would generally resort to replicas of the same high-end brands. However, all of these multinational apparel-producing industries abhor the existence of pirated versions of their products, bidding for these “copycats” to be divulged and incarcerated. As a common thing on a global scale, stopping fashion counterfeiting could cause another economic downturn but its proliferation could lead to severe job cutting by companies that believe that they are losing money.

The overseas production of the various apparels of American and European brands could be the best opportunity for “pirates” as these products are exposed and minimally guarded. Usually, people would assume that these pirates operate underground—some controlled by syndicates or any organized group.

However, it could also be certain that some of these pirates work from inside the textile or apparel factories. After all, it can produce a better replica of the product. Such acts are despised by the multinational corporations as it breaches trade policies and laws as well as patent, copyright, and license laws. However, the existence of pirated goods prompts consumers to spend more as these products are considerably cheaper than the seemingly overpriced originals.

It is believed that producers of pirated goods work underground under a syndicate or some organized group. However, these pirated goods are sometimes sold out in the open for people to see, as in the case of some developing (e.g. India and China) and underdeveloped (e.g. Philippines and Thailand) nations, and in some developed countries—although, rarely do these exchanges happen under the public’s watchful eye. The preconceived notion that consumers coming from developed countries abhor the consumption of pirated goods has been proved false.

The following is an example from an article entitled “Consumption of Counterfeit Goods: ‘Here Be Pirates?’” which proves that consumers can also come from developed countries: “In France, the most common counterfeit products confiscated are shoes, representing 21 per cent of items, followed by clothes and watches;

In Germany, clothes account for 90 per cent of impounded fakes” (Wischermann qtd. in Rutter and Bryce 1155). As unbelievable as it may seem, these circumstances can occur even in developed countries like the United States and European nations. However, the consumption of such products should not be regarded as a crime, or such products must not be confiscated from the owner. Even though it is a pirated good, it was still his or her money that purchased the good. Buying pirated goods does not also necessarily point out as a support for pirated goods nor does it entail any political ideology like an anti-capitalist movement against the multinational brands and their seemingly overpriced goods.

Fashion Counterfeiting is considered a battle between the multinational capitalist companies that aim to make another hundred million or billion in sales and the pirates or syndicates that wanted to make money especially during a global economic crisis. It is an epic battle indeed, but which of the two started it?

The trail from its origin does not seem too far off. Counterfeiting is an old trade that dates back as early as Ancient Rome (Rutter and Bryce 1147). As ancient as it may be, the act has been considered illegal through international trade policies and copyright laws that it seemed to breach. The cause that promoted the pirating of known fashion brands was the decision of these international apparel companies to build more factories overseas for cheap labor.

Labor from the developing and underdeveloped countries attracted these multinational companies because it was cheap: “this drove down the price of labor around the world as firms relocated operations to China (soon, South Asia as well) because labor is cheaper” (Mead 419). This move resulted in the rebirth of an age-old illegal practice—only this time, it covered and affected the fashion industry. Syndicates and other organized group exploited the existence of factories in these areas—especially that they live under the “developing-nation state.”

Then the process moved onto other parts of the region, usually in places where such prohibiting laws were rarely applied. Thus, the ones at fault were the multinational companies themselves as they gave an opportunity for these pirates to replicate their products.

However, sometimes, their presence is not a cause for promoting this kind of piracy. The products can be bought by the pirates themselves—usually they do have the money—from legitimate stores and replicate these after analyzing the products. After all, fashion counterfeiting is simpler than that of software (music, games, programs, albums, videos) piracy. Whichever the case, the reason behind the existence of such products in the market is its affordability since its original counterparts are way more expensive.

The production of these pirated apparels will continue as long as someone would consume them. However, is the piracy of these apparels—some of which people really do need—really a problem, especially with the world experiencing another global economic downturn? What happens to those who cannot afford the legitimate and original apparels? It seems they would have to walk around naked or in shabby clothing, or even resort to tailoring their own clothes. 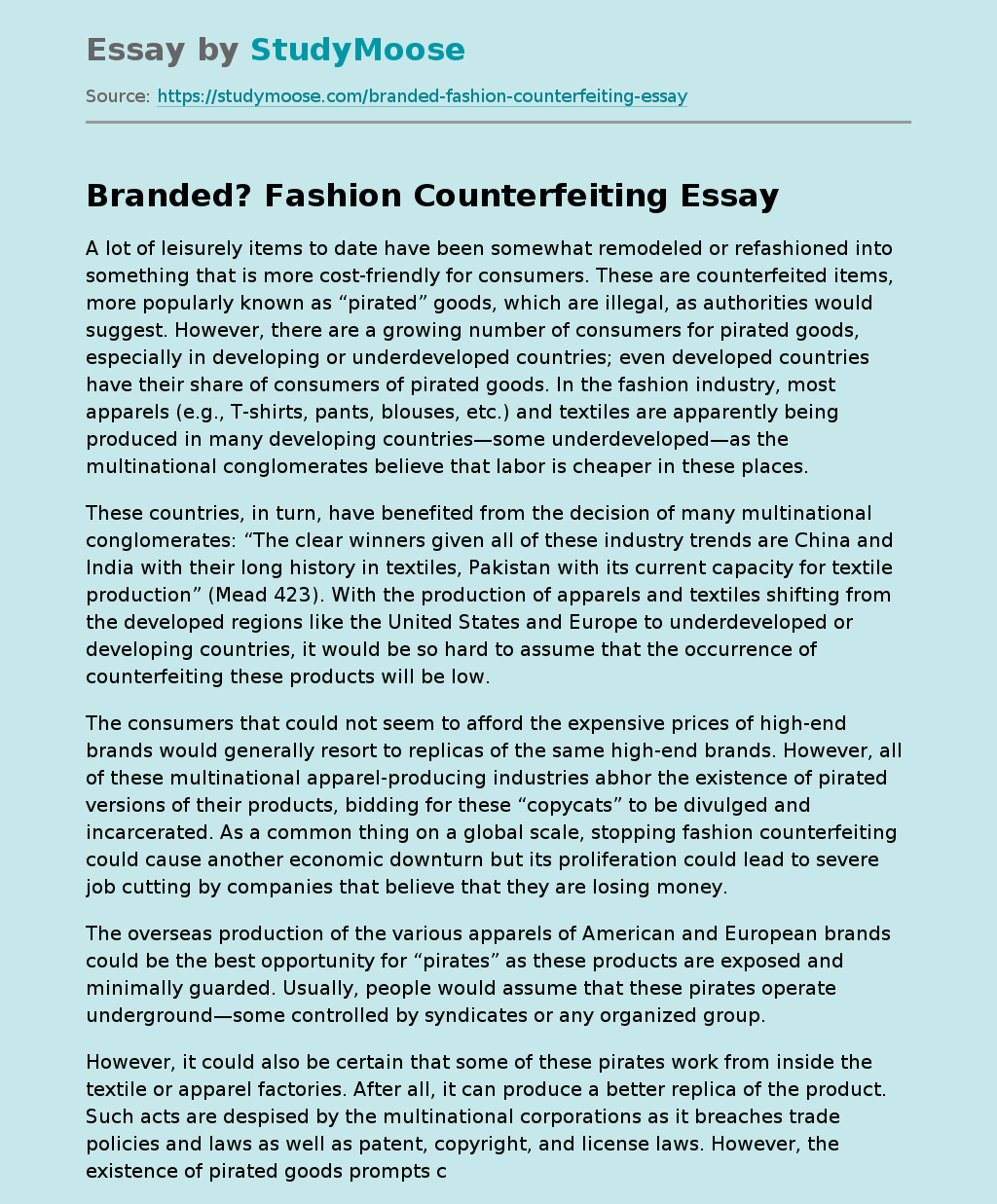