Just imagine part of your body being taken away from you…scary right? That is exactly what happened to Henrietta Lacks. The Immortal Life of Henrietta Lacks by Rebecca Skloot explains who Henrietta was, where she came from, the events that put her in the hospital and eventually killed her, and the legacy she has left in the world of science. Henrietta Lacks was born Loretta Pleasant in Roanoke, Virginia on August 1, 1920. No one knows how she became Henrietta. Her mother, Eliza Lacks Pleasant, died while giving birth.

Don't use plagiarized sources. Get your custom essay on
“ Book Review: The Immortal Life of Henrietta Lacks ”
Get custom paper
NEW! smart matching with writer

Henrietta’s father, Johnny Pleasant, did not have the patience to raise ten children, so he took them all to live in Clover, Virginia. Henrietta lived with her grandfather and her cousin, David Lacks. Henrietta and David had shared a bedroom since she was four, so it was not a surprise when they started having children together. Henrietta had five children in all: Lawrence, Elsie, Sonny, Deborah, Joe (who later changed his name to Zakariyya).

A week before learning she was pregnant with Joe, Henrietta had told some of her cousins that she had a knot inside her. About five months after giving birth she finally went to her doctor.

The doctor told her she had better go to the John Hopkins gynecology clinic. Howard Jones said he had seen easily a thousand cervical cancer lesions, but he had never seen anything like what was inside Henrietta. Dr. Jones cut a small sample and sent it to the pathology lab where Mary Kubicek handled the now famous cells.

She labeled the culture “HeLa” for Henrietta and Lacks and then carried them to an incubator room. Four days later, George Gey, the leader of the lab, noticed the cells were growing with mythological intensity and doubled their numbers every twenty-four hours. George Gey told a few of his closest colleges about the magnificent find and gave them some cultures of the “immortal cells.” Henrietta never knew that her cells had been extracted and placed in labs. She just went on living her life. By September 1951, Henrietta’s body was overtaken with tumors. They had grown on her diaphragm, bladder, and liver. They had blocked her intestines and made her stomach swell. Henrietta knew she would die soon, and she did on October 4, 1951.

Henrietta’s family did not find out about her cells being in almost every lab until 1973. Lawrence’s wife, Bobbette, found that her mother-in-law’s cells were taken from a friend’s brother who had recently conducted an experiment with them. Lawrence called Hopkins, but they said that there was no record of patient by the name of Henrietta Lacks. Lawrence, Sonny, Deborah, and Zakariyya tried to avoid all reporters after that. Deborah especially had trouble with what little knowledge she had about her mother’s cells. She constantly had panic attacks and got hives when talking about her mother. One reporter, Rebecca Skloot, continuously asked Deborah to talk, and eventually she gave in. Deborah and Skloot spent a lot of time together after that. They went to the “home-house” where Henrietta grew up.

Rebecca took Deborah and Zakariyya to meet with a lab technician to learn more about their mother’s cells. That was the first time Zakariyya talked openly about his mother and did not get enraged. Rebecca Skloot had promised Deborah two things: to see her mother’s cells and figure out what happened to Henrietta’s sister, Elsie. Rebecca and Deborah went on a road trip to find out any information they could about Elsie. Elsie had been admitted to the Hospital for the Negro Insane because she had epilepsy and was classified as mentally retarded. Rebecca and Deborah had become good friends while they were investigating for information about Henrietta. Rebecca was devastated when she learned Deborah passed away.

The author’s purpose in writing this book was to in inform and explain from whom the world famous HeLa cells originated from. Rebecca Skloot stated in the book that when she first heard of the HeLa cells, she was obsessed with them. She intended the book to be seen and read by everyone interested in science. Skloot wrote at times very formally and sometimes very informally. She wanted to capture how Henrietta and her family really communicated. This book really made me start to think. In the wonderful world of science, not always do people actually look behind the blinding facts to see where (or who) the information came from and what lengths it took to gain it.

After reading The Immortal Life of Henrietta Lacks I will now think what people had to do to gain the information I’m learning about. I would definitely recommend this book to everyone. I found it very intriguing and it kept my attention. There were a total of twenty seven photographs in The Immortal Life of Henrietta Lacks. Every single photo told a story and helped to explain the written words even more vibrantly. Rebecca Skloot also told stories within the big one. She told about Henrietta’s hard life before she passed away. Skloot explained the facts behind why and how she died. The afterword of the book was very factual and had little to do with Henrietta Lacks.

It answers the questions “Wasn’t it illegal for doctors to take Henrietta’s cells without her knowledge?”and “Don’t doctors have to tell you when they use your cells in research?”. The answer to both questions is no, and the afterword goes into detail about the medical related laws that have been passed for patient privacy and such. Rebecca Skloot’s final purpose to write The Immortal Life of Henrietta Lacks was, I believe, to tell a story of a woman’s incredible part in science and history, which wasn’t even her choice. Henrietta’s story deserved to be told, and Rebecca Skloot did an amazing job telling us about the incredibly brave and immortal Henrietta Lacks. 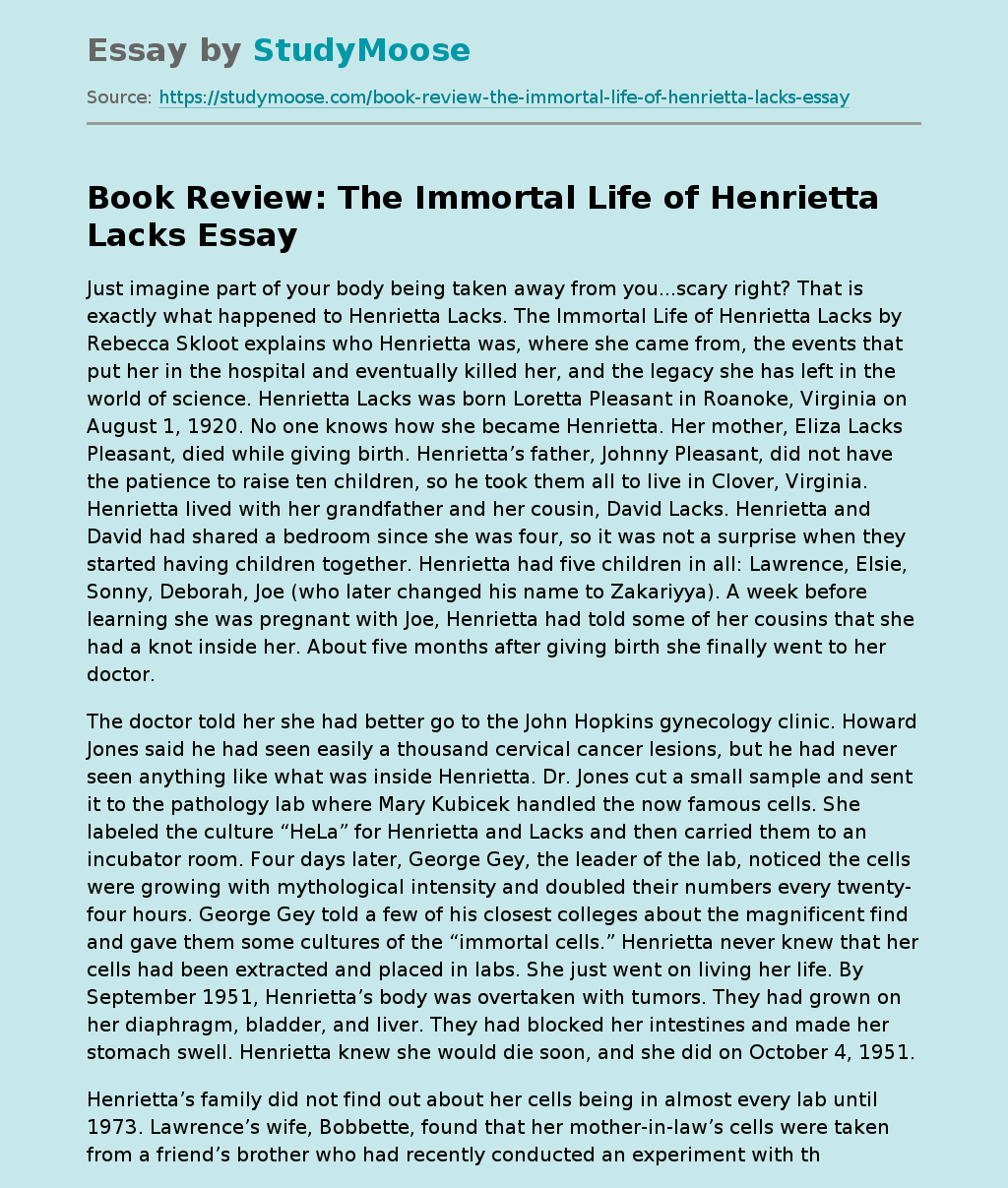