When a person has watched a film, advertisement or read a book, there are distinct elements that are evident throughout the work of art that seemingly communicate more than their surface meaning. This essay seeks to demonstrate how metaphor, connotation and metonym are usually used in distinct cultural texts such as in books, film and others. It specifically applies the basic concepts of communication theory to cultural texts, objects and images. Body Communication theory lays emphasis on exchange and production of meaning and information through symbols and signs (Littlejohn, 2002).

Turn in your highest-quality paper
Get a qualified writer to help you with
“ Body and Cultural Text ”
Get high-quality paper
NEW! AI matching with writers

It draws its argument from encoding and sending of a specific message, where it is received and decoded by the recipient and synthesized for a meaning and information to be drawn out of it. What communication theory depicts is that communication does permeate all evels of human experience while being central to comprehending a certain human behavior (Griffin, 1997). Through metonym, metaphor and connotation, the main elements of communication theory are brought into focus, since they are figurative use of sending certain messages but in distinct ways.

Through them, cultural texts are deciphered and understood, where meanings are drawn beyond the surface meaning. Metonym Metonym, a figure of speech, is rhetorically used where a concept or entity is not called by its name but through the name of another thing that is associated intimately with it. It is the use of a single object or thing to identify another, which might be related. For example, in Act III, scene II of Shakespeare’s Julius Caesar, (Lines 74-77): ‘Friends, Romans, countrymen, lend me your ears’ (Pickering & Hoeper, 1982).

‘Ear’ in this case represents attention, since it is the ears that we use to pay attention to speech. Once the ‘lending ear’ (attention) has been heard, the basic understanding of ‘lend’ (to borrow something) is stretched to include nonmaterial things, in this case attention. Washington might be the capital of the United States, but it is usually used as an obvious metonym for the U. S. government. In film, metonym gives meaning to distinct elements of plot, such as in the recent movie, American Beauty. It is a comedy where personal, inner conflict is depicted through metonyms.

For instance, the protagonist, ‘Tootsie’, shows signs of inner conflict when he lacks confidence to carry out a scam. In another level of conflict, metonyms in the form of coworkers, boss, father, friends, TV audience and his love depict the protagonist’s social conflict. The movie is all about different levels of conflict that are splendidly shown metonymically, through different contexts. This is achieved through outward projection of different levels of conflict on other characters it is seen, creating a very dramatic impact. Particular types of metonyms in substitution do influence our thoughts, actions and attitudes.

This is achieved through focusing on a specific aspect and suppressing another inconsistent with a particular metonym. For example, Lakoff and Johnson argue that when you think about ‘Picasso’, your thoughts move beyond a piece of art (1980). You start thinking of it in relation to the individual, his artistic conception, technique, art in history and other relations. Connotation Connotation in texts, expressions and in mere words shows the expressed and emotive part of a language. Seemingly, all connotative signs and expressions lie vaguely midway between ambiguity and symbolism.

For instance, the word ‘iron’ denotes a very tough metal but can connote that a man is a piece of ‘iron’ since he has won a boxing match without a problem. Connotations form a major component of poetry, where its power of expression, suggestion and emotion offers parameters that gauge the literary capability of an author while the cultural text awareness of the reader is revealed. This means that connotation must be culture and text bound to be of any significance. For instance, in Elizabethan times black was synonymous to piracy, lust, infidelity and cruelty.

This is shown in Shakespeare’s depiction of Elizabethan disgust of the connotation black in more vivid racial terms. In Othello, Iago expresses that “… an old black ram is tupping your white ewe” and “arise…or else the devil will make a grandsire of you” (Pickering & Hoeper, 1982). This association of Othello shows the established historical connotation that Western nations had concerning black as pure evil. The communicative element of connotation is pervasive and everywhere. It is expressed in all cultures and dwells across all ages in all literary styles, genres, cultural expression such as music, architecture and painting.

Music offers something more to people beyond the rhythm and stones, thus connotation end up being capable of having double meanings and creating euphemisms. In film, connotation makes a communicative entry, as in the official poster of Ugly Betty, Season 2. In the poster, there is a darker background that lies behind Alexis, Amanda, Daniel, Marc, Claire and Willie, connoting Mode as being business and in that juncture, wealth and money equals evil and power. In the same poster, there is a white and blue background behind Betty, Hilda, Henry, Justin, Christina and Iganscio.

This connotes family, happiness, tranquility and deeper peace. In hair product advertisements, the portrayal of hair as free flowing and seemingly in motion in an immaculate style connotes a woman readying herself to socialize, in that the free-flowing hair connotes freedom, as elaborated by Williamson, (1978). Metaphor Metaphors are simply comparisons showing two things, unlike in a major way, but importantly similar in a certain way. Being an analogy, a metaphor lies between two ideas or objects and elaborated through the usage of a certain word, which communicates figuratively.

In books, metaphors communicate a poetic imagination that enables authors such as Shakespeare to show a comparison between the world and stage, where humans enter and leave the stage, as seen in the drama “As You Like It”, while Robert Frost’s poem, ‘The Road Not Taken’ compares the life of a person to a journey. In film, metaphors elaborate issues figuratively, such as in a short film entitled The Unique Oneness of Christian Savage. In the film, a child loses a best friend who falls from a tall tree where they had been playing.

The child then runs away from the funeral and the words spoken, and starts beating the “evil” tree that killed the friend using a broken branch. This is a visual metaphor introducing an element of conflict without the use of words but very powerful. In adverts, metaphors are used in associating products using semantic domains that have positive connotations. The truth in an advert appears like a law for advertisers to keep off from explicitly making such statements that might be either true or false. For instance, in an air freshener advert, it might be said in an advert that it will bring a tropical breeze in your home.

While it is obvious it cannot do this, what is metaphorically communicated is that your house will have fresh air. In addition, the communicative element of metaphors also takes a visual course, where it becomes a window of new thinking. These visuals give the individual a chance to escape while those who are creative can explain and interpret a novel world. In understanding the metaphor, the interpretation is on the world we live where we establish the relationship. In advertising, this is even clearer and true in the recent highly creative and digital images in advertisements.

In fact, the smarter a metaphor is the more unforgettable and memorable the advert campaign. In some Ford Motors adverts, the car transforms itself in different terrains, into a metallic ape along a mountain and a crocodile in a river. This is a visual metaphor for strength and safety. Most importantly, the more fun and creative the metaphor, the more unforgettable the message it conveys. It has been a major sell for adverts with figurative images. For instance, there are adverts on the campaigns on Aids by the French. It has images which are very captivating and fearful but communicate their intention.

One is a naked man having sex with a gigantic venomous arachnid, while another shows a female doing the same with another, a metaphor for unprotected sex. It is disgusting and scary to say the least, but aptly effective. Such graphical metaphors depict the underlying element of communicative theory, where the way communication is done might not be important, rather, it is whether the message has been communicated at all (Littlejohn, 2002). In the case of the French Aids Campaign adverts, the emotional figurative hook connects well with the audience. Conclusion

Metonyms, connotation, and metaphors are demonstrated in cultural texts with a communicative element that edifies the spirit of the communication theory. All of them work in different ways to aid communication. 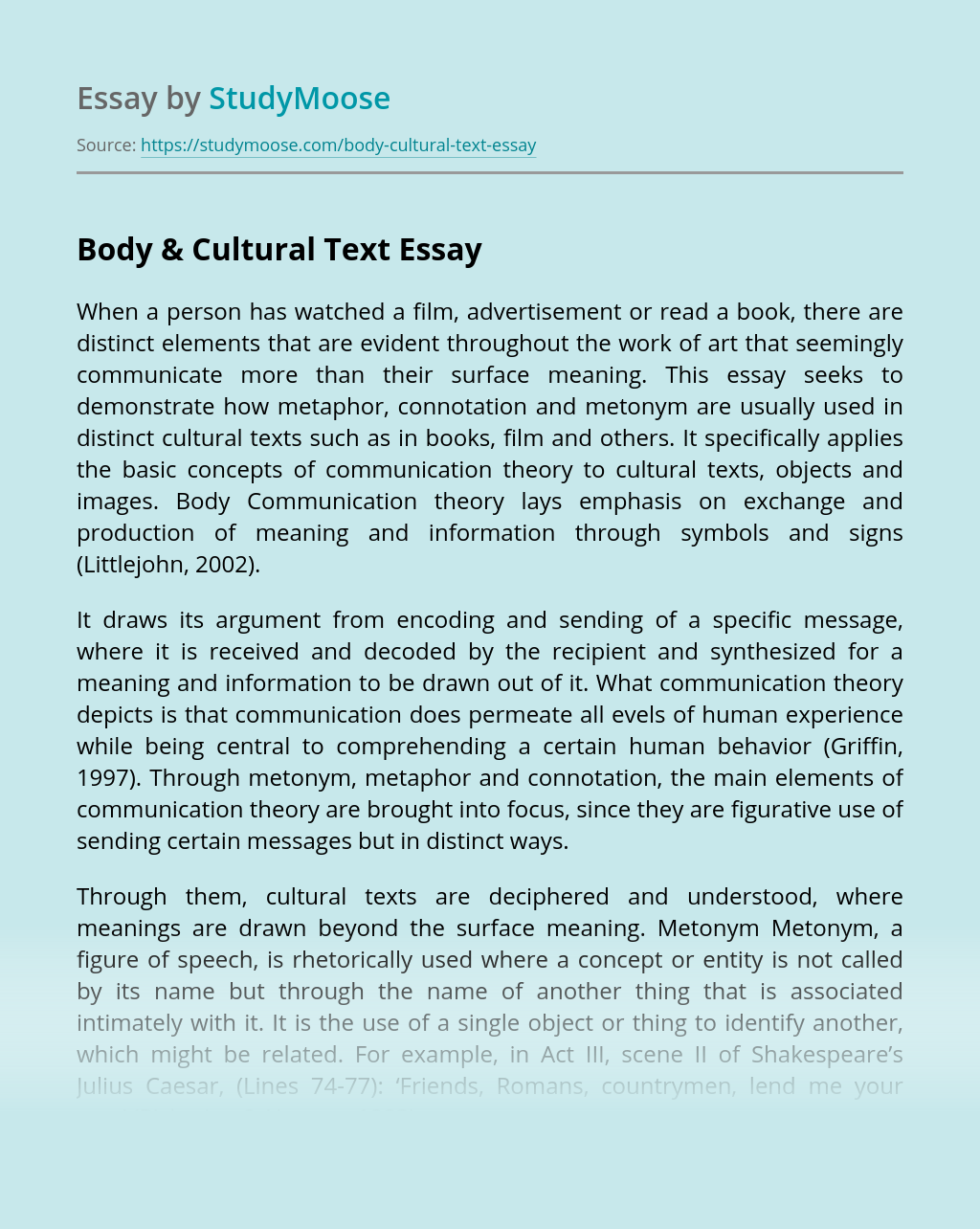 Turn in your highest-quality paper
Get a qualified writer to help you with
“ Body and Cultural Text ”
Get high-quality paper
Helping students since 2015
Stay Safe, Stay Original