One fine Sunday morning my cell beeped for a message from one of my friends. I couldn’t forget and discard it just like all the other absurd forward messages I get. It went like this, GOOD MORNING YOUNG INDIA!! ASK YOURSELF TODAY AM I A TRUE NATION BUILDER????? The message made me think and this article is the product of my thoughts over that single message. WHO AM I ?

Don't use plagiarized sources.
Get Your Custom Essay on Young India Just from $13,9/Page

The biggest curse of India in my opinion is its directionless youth who constitute a major chunk of its population. Let me begin with two cases which demonstrate the power of youth, one in the past and the other in the present. Adolph Hitler understood the power of young people.

After he came to power in Germany in 1932 one of the early actions he took was to outlaw all youth groups, especially the religious ones.

In their place he formed the Hitler Youth and the German League of Young Girls. In these organizations young people were taught to revere Hitler and serve him without question. The boys were taught that it would be an honor to lay down their lives for Fatherland and Fuhrer. The girls were taught that it was their duty to bear children and obey the Fuhrer. The youth of Germany were taught that they were the master race and it was their destiny to dominate the world. What happened as a result of Hitler harnessing the power of youth? A significant portion of this generation of German youth committed horrible atrocities in the name of their Fuhrer. The Jasmine revolution triggered shockwaves not just in Egypt but throughout the Maghreb. The root cause of everything being the frustration and despair of their young populations.

The revolution began in the middle of December when a desperate, unemployed computer scientist named Mohamed Bouazizi set himself on fire in the small town of Sidi Bouzid. Bouazizi’s death symbolized the despair of a generation, triggering a series of nationwide protests that ultimately swept longtime dictator President Ben Ali from power. 80,000 Tunisians have just finished up with their studies and they need jobs. Governments today must understand the truth of the Roosevelt’s saying : We cannot always build the future for our youth, but we can build our youth for the future

So is it just the role of the government and does it mean that the youth are all right in their roles as responsible citizens of this nation? The answer would definitely be a big NO.

INTROSPECTION INTO THE PRESENT STATE OF AFFAIRS:

Young people are in a condition like permanent intoxication, because youth is sweet and they are growing.
Aristotle (Niomachean ethics)

The major intoxicators today being Facebook, cricket and cell phones. With utter disregard to the fact that 88% of those who reach high schools don’t even get to reach colleges, the gifted lot is lost in FACEBOOK and other social networking sites. An average youngster spends not less than 2-3 hours every day in such timewasters and distractors. It is well understood that these sites played a big role in unifying the youth in Egypt and Tunisia but is that what we use them for in our country? Our central libraries are seem to be filled with octogenarians and septuagenarians and devoid of youngsters, while our police stations and juvenile courts are finding it difficult to cope up with the increased incidence of crimes(cyber crimes too)committed by youth. Cricket is another curse, thanks to the T20 version of the game; the IPL and the schedule of the Indian team have glued us to the television all throughout the year.

Watching Sachin’s century is of utmost precedence and priority, even parental orders (requests) and personal duties take a second to that. Thanks to the successive HRD ministries they have ensured that it would be enough if an Indian collegiate just studies the day before his examinations to pass them. Neither Kapil Sibal nor Yashpal can infringe on our freedom. Education is no longer a continuous process. Engaging in activities that ensure momentary pleasures has become the order of the day. Education today needs no more passion; it just needs our efficiency in burning the midnight oil. What was studied last semester volatilizes the day just after the semester exam.

Thanks to the outdated syllabi and the thought dampening curriculum. A choice between watching the IPL final today and preparing for tomorrow’s exam would always tilt the tables in favor of the former. Finally, it seems that today’s young Indian may live even without food but not without a cell phone. Enough care has been taken by the biggest gainers (the service providers) so that schemes are available to ensure that even a student from a lower middle class background can afford to talk for hours together on phone. The term emergency has been replaced by indispensable in the context of its usage. In spite of an SMS being the inspiration for this article, by and large, cell phones are misused and serving the purpose nowadays THE WAY AHEAD:

“Youth is not a time of life; it is a state of mind; it is not a matter of rosy cheeks, red lips and supple knees; it is a matter of the will, quality of the imagination, a vigor of the emotions; it is the freshness of the deep springs of life” – Anonymous. Youth is, after all, just a moment, but it is the moment, the spark, that we always carry in our hearts. There is a great potential in young people like us. It is like dynamite. Dynamite can do great good when used in the right way. It can pave the way for new buildings, schools, lakes, highways, and numerous other projects which will benefit mankind. In the wrong hands, though, it can be used to take life, often thousands of lives. Young people have the same potential for good or bad. We are idealistic. There are worlds to conquer, battles to win, deeds to be done. We have not yet learned what can’t be done. We have not become jaded by life’s heartbreaks and defeats. And because we don’t know what can’t be done, we often achieve great things.

We have boundless energy. We seem to never tire in whatever work we passionately believe in. We don’t tire like the rest of the adults who have done enough and often feel like they need a rest. We approach many things with a clean slate. We don’t have many of the old prejudices that the older adults have. This is why there is often less of a problem with racial bigotry among the young than among the old. But with these things there are some dangers. We are sometimes naive. We do not have the value of experience. We often give into the siren call of temptation that the old have faced. And, we are less likely to listen to older people who warn about mistakes because they are so idealistic.

It was very rightly said that, Ain’t no power like the power of the youth, ‘cause the power of the youth don’t stop.” According to Dr.Abdul Kalam, the first Indian to give a vision statement for the youth, the greatest challenge of transforming India can be achieved only through youth who have got the power of ideas, ambition and ability. Ultimately, he says India needs youth who are job givers and not just job seekers. We youngsters need to sincerely lend our ears to the words of such great men because only then we would be in a position to disprove the saying, In case you’re worried about what’s going to become of the younger generation, it’s going to grow up and start worrying about the younger generation – Anonymous.

A flight without a destination, a bullet without a target, a game of hockey without any goalposts, is all just analogous to a youngster without objectives and passions. All the above have disastrous consequences. However on the brighter side, only the youth have the potential to redeem this nation, bring back its fading glory and raise it to a position where other nations can just look up to. 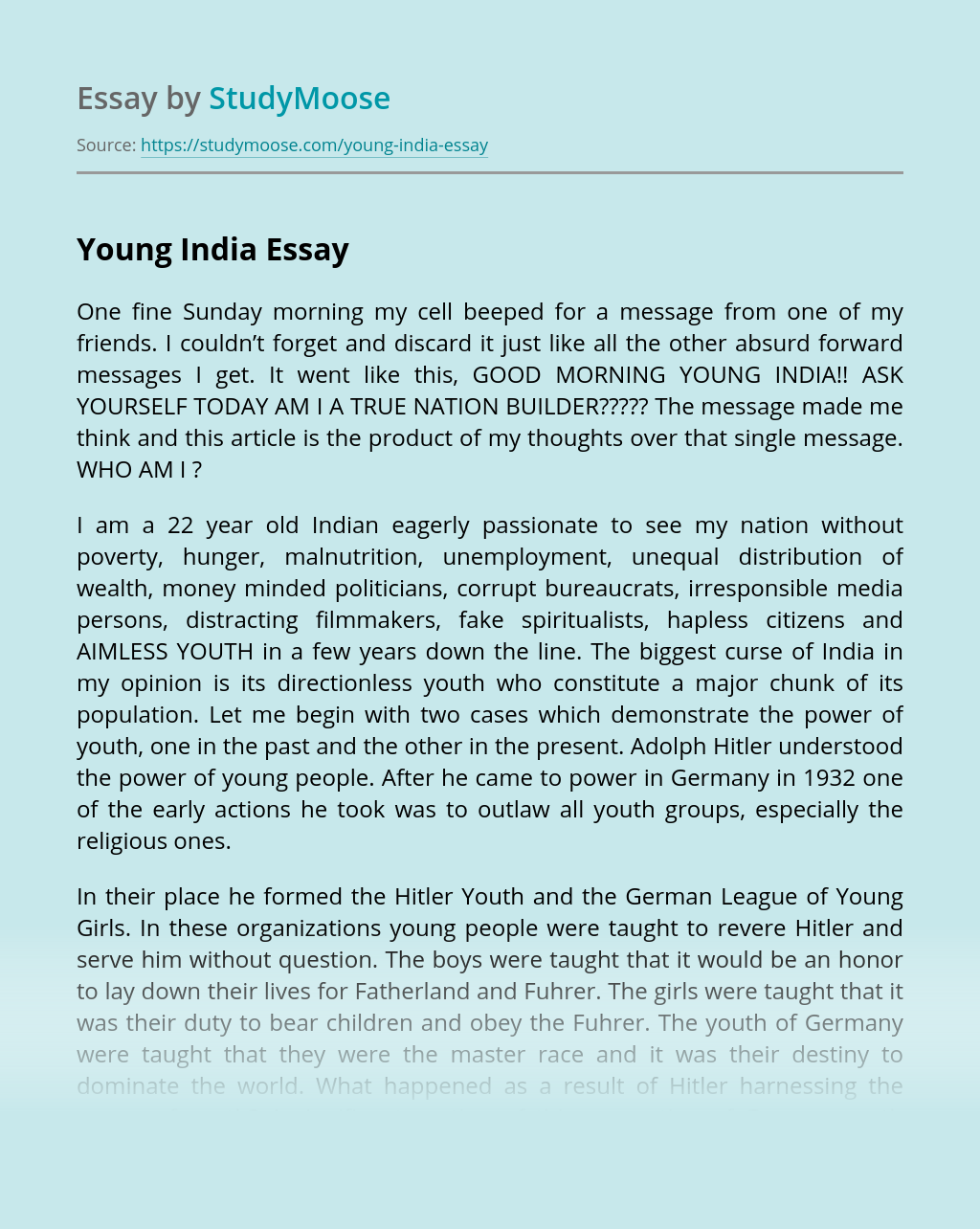 The world is full of rich culture, diversity and experiences unique to each individual. When determining the validity of historic accounts we must factor in that particular historian’s point of view, which should be characterized by ethnicity, idealogy, theoretical or methodological preference. With these factors views of the past often vary from person to person....

Ethical hacking is an emerging tools used by most of the organizations for testing network security. The security risks and vulnerabilities in a network can be recognized with the help of ethical hacking. This research completely concentrates on ethical hacking, problems that may occur while hacking process is in progress and various ethical hacking tools...

Get Essay
The Importance of Being Earnest’

Throughout the span of the previous century, Joseph Conrad’s once-dark work about a man named Marlow, journeying down the Congo River, has turned out to be a standout amongst the most studied and most examined pieces of literature. During Joseph Conrad’s lifetime, little objectiveness was made over his 1899 novel Heart of Darkness. This novel,...

My name is Joselito T. Santos Jr. and I’m a senior at San Beda College, majoring in legal management. As a graduating student of the said college an important school paper requirement for one of my subject which is Strategic Management should be accomplished to graduate. I’m writing to express my interest in making a...