"Sunday in the Park" by Bel Kaufman

“Sunday in the Park” by Bel Kaufman begins on Sunday with relaxed mother and father watching their son, Larry, playing in a sandbox. Its peacefulness is disturbed when another child throws sand at Larry.

When warned by Larry’s mother not to throw sand, the overweight child is encouraged to throw as much sand as he wants by his big father. When Larry’s father, Morton, confronts the situation, he is intimidated at the physical presence of the big man and retreats with his wife and son.

Don't use plagiarized sources. Get your custom essay on
“ “Sunday in the Park” by Bel Kaufman ”
Get custom paper
NEW! smart matching with writer

The wife despises her husband’s weakness. When he criticizes her for not disciplining their son effectively, she attacks him, “You and who else?”Larry’s mother feels happy when her husband and son get together at the park on Sunday. Her husband, Morton, is “city-pale”, which shows that he does not go out very much. Morton wears glasses and physically very weak and small. Because this occasion being so rare, she loves the moment until the other boy at the park throws sand at Larry.

She tries to tell him not to throw sand but his fat father tells him that he have the right to throw all he wants in public sand box without looking away from his comics. This man is telling his son to be a bully. She feels small and scared at the man’s size looks at her husband, Morton. He gently speaks his thoughts to the man with a shy smile to the man but when the man looks into his eyes, he loses words.

He tried to reason with the man, but the man responded with physical threat. The man puts down his comics and starts to threaten Morton to get “the hell out of here” if he does not like it. Morton reads magazines and the fat man reads comics, this shows the difference between their level of knowledge and morals. His wife senses Morton is angry and he gets up, but she does not stop him. Inside her heart, she wants him fight for what she feels is justice.

Some normal wives would have stopped the fight but she did not because she may have wanted to see the manly side of Morton. When the man got in front of Morton, he just turns his back and grabs his child to get out of the park. Morton does stand up for what he believes is right, which is that it’s immoral and unjust to use physical force to threaten others. She feels disappointment from Morton’s action or maybe lack of action. The wife is eager to make the son and her husband be physically confident. But on the other hand, what Morton thinks is that it is the right thing to walk away than fight the man. Not fighting brought Larry to believe that standing up to a bully who uses physical threat brings no peace or understanding but physical injuries. What his wife believes is not a moral way to approach justice.

Morton explains to her why he steps away because it would have only brought physical injury but no justice. She is embarrassed at the fact that he did not do anything just to avoid physical injuries. When they are on their way back to their car, their child does not stop crying and Morton gripes at his wife to keep him quiet. Unable to stand Larry’s crying, he decides to do it himself. However, as angry as she is, she does not want him to discipline the child. So she blurts, the same phrase that was used by the men at the park to threaten Morton, “you and who else?” In this case, she is the bully in the family that threatens Morton. This ending suggests that there would be another fight between wife and Morton that might cost their marriage. If her dissatisfaction continues with Morton’s action; she would not be able to stand to live with him any longer.

She wants Morton to show their son a father that can be a role model that fights a bully. Her thought is unmoral, what Morton did is right because the fat man teaching his son to be bully by using force is wrong. Kaufman implies that the morality is to not dominate others with force or fight; it is to avoid them when brought into situation where nothing can be brought but anger and hatred.

"Sunday in the Park" by Bel Kaufman. (2016, Jul 18). Retrieved from https://studymoose.com/sunday-in-the-park-by-bel-kaufman-essay 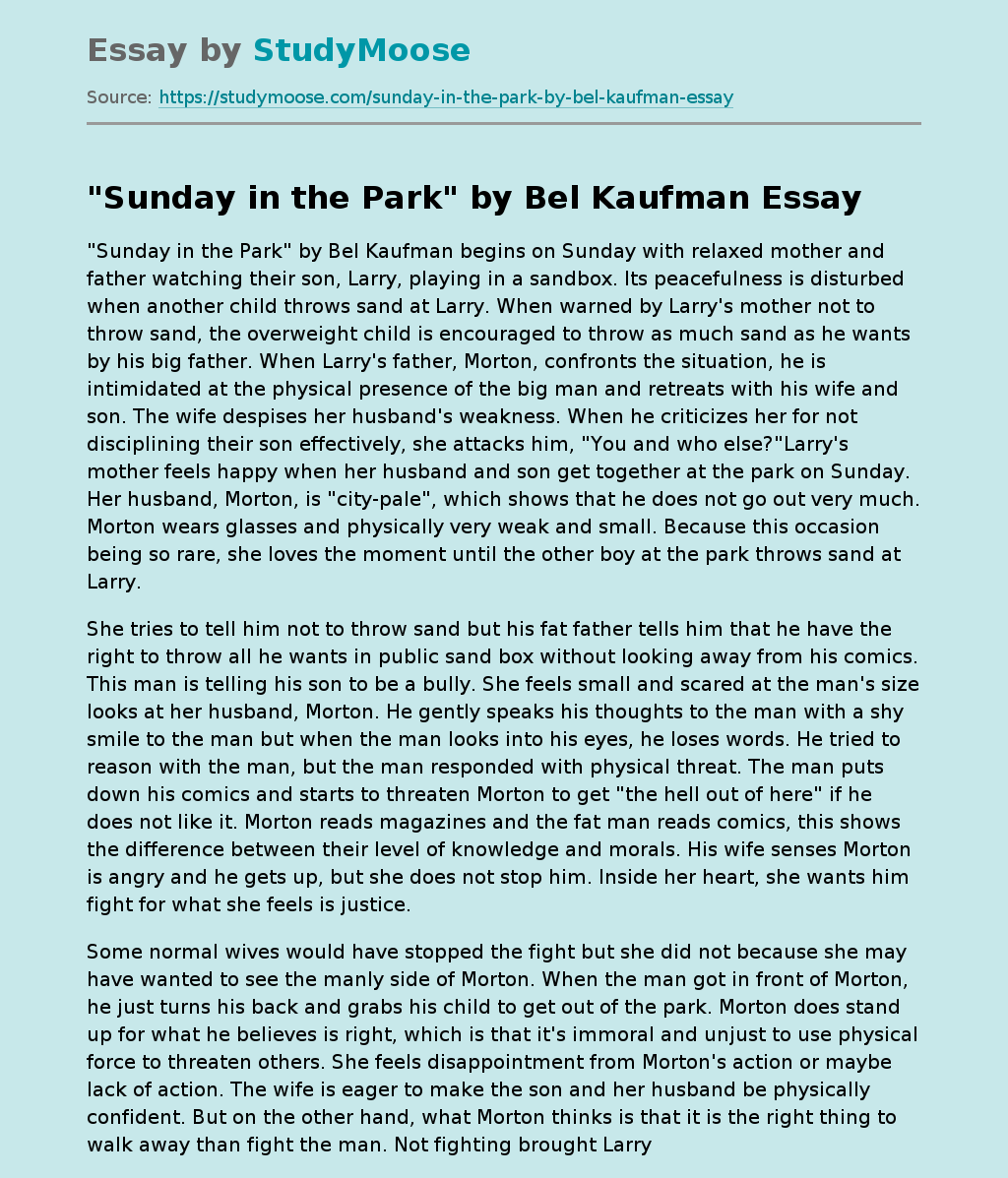