Betrayed by My Best Friend

Betrayed by my best friend, the more I thought about the title the more I decided that it was time to write about the betrayal that cost me so very dearly. She entered my life in August of 1978 with her three children, she rented the apartment on the other side of the old farm house my former husband and I had purchased. I was still young and naive then, and overly trusting. I thought she and her sons would be a blessing instead she used that friendship to betray me and my daughters.

Don't use plagiarized sources. Get your custom essay on
“ Betrayed by My Best Friend ”
Get custom paper
NEW! smart matching with writer

My former husband was cheating on me: I knew that much I just had no idea that he was cheating with two different women at the same time. One woman he got pregnant and married the other was my best friend or so I thought. I first became suspicious when I discovered she knew exactly where my former husband hid his cigarettes and alcohol. I ignored those clues; I just could not bring myself to believe she was having sex with my former husband.

She knew we were having problems and even told me at one point she would gladly testify in the divorce trial if she were needed. I told her of coarse she was needed; I had to prove he was cheating on me and that he was continually abusive to me and my daughters. Imagine my surprise when she reneged and refused to testify. She had been dating a friend of mine and while I was visiting she was also there.

She could not even look me in the eye but still being as naive as I was I pursued the subject with my friend who finally told me that she had indeed been having an affair with my former husband. I remember sitting and crying all I wanted was to know why, what had I done to deserve this? She never did answer me but my daughter recently told me what happened after I finally left.

Apparently she was supposed to be cleaning the house and doing the grocery shopping since my former husband did not think that his children needed food. When the divorce trial became a reality, she not only would not testify on my behalf, she would not answer her phone. My attorney told me that if she was called to testify, she would be a hostile witness and possibly harm my case more than it was already harmed. My former husband’s attorney was the assistant District Attorney who happened to play golf with the presiding Judge. On the advice from my attorney she was not called, I lost my daughters to my former husband; he was working and had a good income.

I was working at a minimum wage job, so the Judge decided that my daughters would be better off with their father. The girls were abused by their step mother; their father knew what was happening to them but ignored them. My best friend’s betrayal not only cost me my daughters, it cost me precious time with my daughters that I can never regain. I am no longer bitter where she is concerned, she is not worth it. Betrayal is the hardest thing to deal with because it involves not just friendship but trust. I sometimes wonder what happened to her after the trial, I would like to see her again one day and ask: “why did you betray me?”

Betrayed by My Best Friend. (2017, Jan 20). Retrieved from https://studymoose.com/betrayed-by-my-best-friend-essay 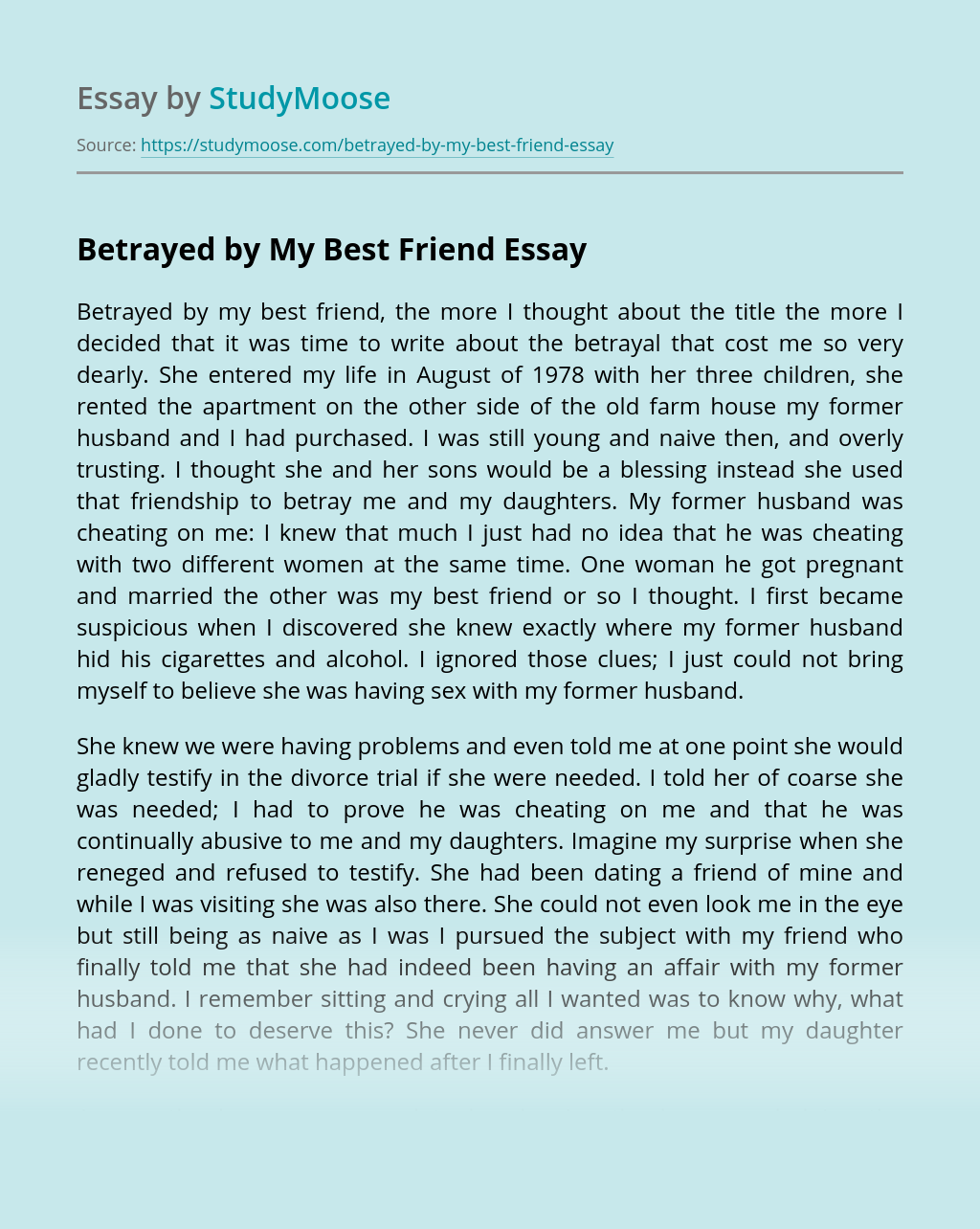