The passage from Testaments Betrayed by Czech writer Milan Kundera discusses the basic idea of the preservation of privacy and the criminality of the failure to do so. The passage considers the situation that occurred between two important Russian figures around the early 1970’s. Through complete examination of the circumstance and Kundera’s stance, the sheer irony of the chain of events is clearly manifested and public and private are proved indeed to be two distinct realms of existence.

The complete irony embodied in the series of events serves to convey and support Kundera’s claim that “curtain-rippers are criminals.

” As suspected, dealings between Jan Prochazka and Professor Vaclav Cerny, a well-known figure with anticommunist sentiment, sparked heightened surveillance. Still, the police’s ultimate decision to record these meetings and broadcast them by radio was the poision that failed to discredit Prochazka yet succeeded in contributing to their own death and destruction. Clearly evident, the actions of the police infringed on the privacy of the two individuals.

Through these illicit actions the public’s eyes were opened up to a greater wrong than the talk and aspirations of two human beings. They were opened up to the irreparable actions of introducing two differing spheres, private and public life. The fact that the scandal did in part discredit Prochazka initially, demonstrates the overall deceptiveness of the act and in turn makes the public’s final realization of the travesty stronger and more resolute.

The basis for this realization and failed attempt at discrediting Prochazka lies within the inescapable fact that private and public domains are to remain separated.

Kundera successfully conveys this view to his reader in the passage. In doing so, Kundera provides realistic examples of how differently people act in private. “A person…slurs friends, uses course language…floats heretical ideas he’d never admit in public, and so forth.” As seen, Kundera first simply says that “a person” does all these things, yet in the following sentence he expresses that “we all act like Prochazka.” This noticeable, alluring, and gradual shift in expression serves to demonstrate to the reader just how common Prochazka’s situation and actions are.

As a reader, it is almost impossible not to relate to such a strong and truthful statement. Private life in essence has a distinctive conduct that accompanies it. For instance, in private life one is not expected to justify their statements or have them placed under the microscope for anyone and everyone to dissect at will. It is a sacred interval in which sincere thoughts are not hindered by the incriminating restrictions of public life. Clearly this instance serves to demonstrate why these two elements of life should remain separated.

Overall, Milan Kundera clearly expresses his claim that private and public are two essentially different worlds that are not to be tampered with. Furthermore, Kundera uses an actual occurrence in successfully demonstrating this point. Following thorough evaluation of the argument, the bold statement, “curtain-rippers are criminals,” can easily be deemed true. 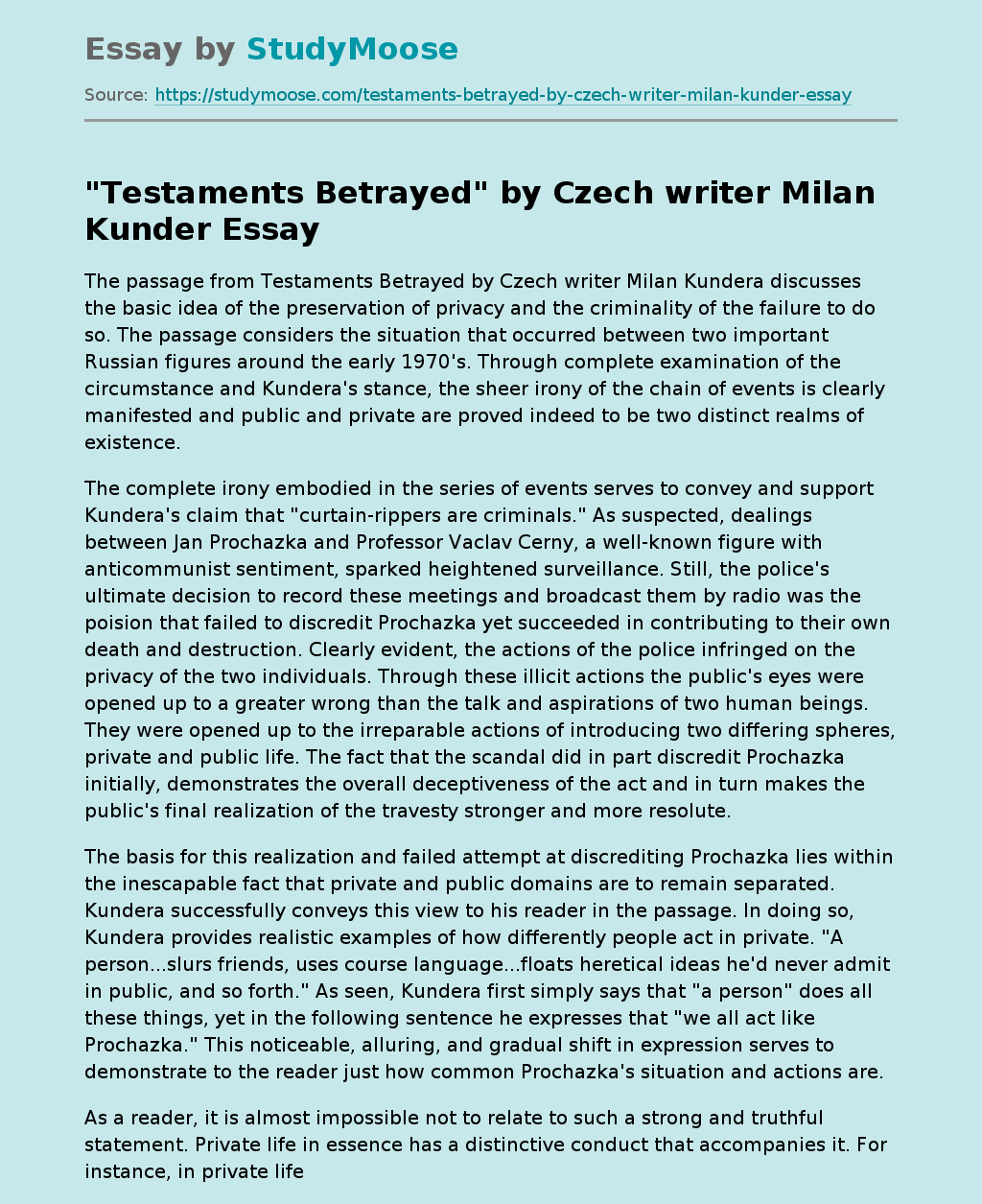