The film, Freedom Writers, directed by Richard LaGravenese captured the lives of underrepresented and at risk students whom lived in Long Beach, California, that were born into gang life and didn’t see their lives past than age eighteen. Erin Gruwell was a passionate young teacher keen on social change. Wanting to make a difference, she decided to teach at the newly voluntarily integrated Woodrow Wilson High School. The movie’s portrayal of stereotypes was emphasized through its technical aspects, the recurring themes of segregation and racial profiling, and the characterizations of individuals, while at the same time, the humor in the film was able to keep it lighthearted and enjoyable for the audience.

The Freedom Writers is about the young, novice teacher Erin Gruwell and the students in classroom 203 at Woodrow Wilson High School, Long Beach, California. The story takes place from year 1992 to 1995 and it is a true story. Ms Gruwell was very excited for her first day. She had big plans for how she was going to get the students to line up outside the classroom door, instead of not showing up to class or quit before the first semester was finished.

This was how the schools’ reputation had turned out to be after the integration program was suggested at Woodrow Wilson. To teach the street kids, was a lot easier said than done. To get the students’ attention, Ms Gruwell had to call them Nazis and count how many of them who had lost friends to gang violence.

The students comes from many different societies. In room 203 there are blacks, whites, Latinos and Cambodians. For many of these kids, death, violence, gangs, and fighting for territories, are daily events. They come from broken families and have had a very difficult and challenging childhood. They are happy if they make it to the end of the day. One of the students, Eva, said to Ms Gruwell during class; “what are you doing in here that makes a god damn difference to my life?” This wakes Ms Gruwell up, and she starts to use unusual methods like playing games, bring the students on trips, and make them write diaries to try to teach, and to help them with their lives and their chance to graduate high school and go to college. The title of the movie and the book are based on these diaries.

There are many strong characters in this movie. It is not easy to decide who the main characters are, because we feel like we get to know every one of them, and each character have its own story. Ms Gruwell seemed like an inexperienced, rich man’s daughter, but through the things she did, she showed us some admirable sides of herself. Eva Benitez is a Latino/Spanish- American girl. She has a very strong personality and fights hard for what she thinks is right. But under the unyielding mask, we can sense a hint of uncertainty.

Marcus is a black boy, and one of the persons we get to know most about. He seems like a very nice boy, but he also has his dark secrets. Marcus changes his personality and his way of living a lot because he wants to move back home to his mother. Sindy is a Cambodian girl. She was involved in the main conflicts in the movie. She has been in a refugee camp, and after the war in Cambodia her father is not the same anymore. Her character shows no fear and an admirable willpower.

The main theme of the movie “Freedom Writers” was about the prevalence of racism in public school and breaking away from the stereotypes. In the beginning of the movie, the students that were in Mrs. Gruwell’s class were clearly segregated from each other and isolated themselves into cliques. Gang wars were a part of their daily lives. The wars stemmed from older generations teaching and portraying that violence and hatred was normal.

Growing up, the kids were raised to hate and fight anyone, even in school, that was a different race from them. While the other teachers had given up on these students, Mrs. Gruwell saw their true potential. Her classroom became a place where students could feel physically and emotionally safe. This film’s social relevance pertains to today. Although as a society we have improved, racial tension and gang violence still exist in public schools, but it’s important to recognize that those students are not hopeless causes.

They may be considered the outsiders, but their backgrounds make them strong enough to overcome the stereotypes that have been placed on them, obtain an education, and invite change into their communities. The value of this film was teachers shouldn’t judge, or give up, on students no matter their background. Teachers need to see that these students just need a chance to show that they are capable. With the 1992 Rodney King Riots of Los Angeles in the not-so-far past, the plot of Freedom Writers became very realistic. The racial tension in the Los Angeles area had reached an all time high. This racial tension carried over into Mrs. Gruwell’s classroom.

The Blacks, Latinos, and the Cambodians had all segregated. It wasn’t hard to realize that could have very well have been what many high schools in the Los Angeles and Long Beach area looked like after the 1992 riots. The way Mrs. Gruwell brought the students together did not seem realistic. When you’ve been in rival gangs for the majority of your lives, it seems like it would have been hard to be brought together over a few journal entries and a trip to the Museum of Tolerance.

However, we did not grow up in the Los Angeles/Long Beach area during that time period, so we’ve no idea what the situation was like for those kids. Overall, the film was well assembled and the plot was convincing and believable. Freedom Writers had a mission. Nothing about the film was subliminal, and the characterizations were blatant. They could have helped or hurt the film’s message. The characterizations were warring factions with a mutually bred hatred for each other.

The primary metaphor was war between the ghetto, little Tijuana, little Cambodia, and white people. Everyone fought for their own people, but never their own identity as they were willing to throw their lives away to be “respected”.

The stereotypes of each ethnicity defined the characters at first, but as the story progressed, their characterizations became more unique and tragic. Both society and the teachers looked down upon these kids, never expecting them to go anywhere in life. The stereotypes placed upon the youths of Long Beach brings empathy from the audience because they can somewhat compare to being looked down upon. So through the horrible environment you understand the kid’s stagnancy and ignorance, but also their will to survive.

With such a hard hitting subject matter and great performance, the film provoked emotions such as understanding, sympathy, inspiration, and discontent with the education system. At the beginning of the movie, you hardly ever see any of the Blacks, Latinos, or Cambodians in the same scenes. LaGravenese does this to show the racial tension that existed in Long Beach following the 1992 Rodney King riots.

LaGravenese also used lighting to help emphasize the racial divide. At the beginning of the movie, the scenes are very dark. As the movie progressed and Mrs. Gruwell began to tear down the racial divide, her classroom became lighter. She always had the blinds open and flowers scattered around the room to emphasize peace and tranquility. The choice of background music for the film subtly helped to show how the racial divide in Mrs. Gruwell’s classroom was eventually broken. At the beginning of the film, music by Tupac that talked about violence, suffering, and living in poverty was played.

By the end of the movie, LaGravenese played some of Tupac’s music about hope, wealth, and prosperity. This music was played once Mrs. Gruwell had finally torn down the racial divide between the different ethnicities. The film captures the viewpoints of several students in the classroom, each fighting their own personal battle all the while capturing the relationship that is being formed between each other. With determination and passion brought by Ms. Gruwell, the students are focused on the phrase “Toast for Change,” and being a hero although just an ordinary teenager.

The film’s value is to open the eyes of the audience to understand their surroundings and realize that there is much opportunity for one to make a difference just as Ms. Gruwell did as a teacher and just as her students did in each others lives. To conclude, Freedom Writer’s wonderfully portrayed how a group of students, with the help of their teacher, were able to drop their previous stereotypes and hatred of each other to live peacefully. This hatred was derived from generations of gang wars based on ethnicity, and although each teen fought for their people, they had their own personal battles as well.

As students were able to open up more to Ms. Gruwell about their lives, they realized they weren’t all that different from each other. This helped form the close relationship of Classroom 203. The stereotypes of each group of students masked the identities of each individual, which invoked feelings of sympathy and disbelief from the general public. Different styles of Tupac’s music and the way scenes were shot helped to subliminally explain the divisions between ethnic groups and how they became united. While the film may not be the most theatrically beautiful, the message it gives holds a priceless value. 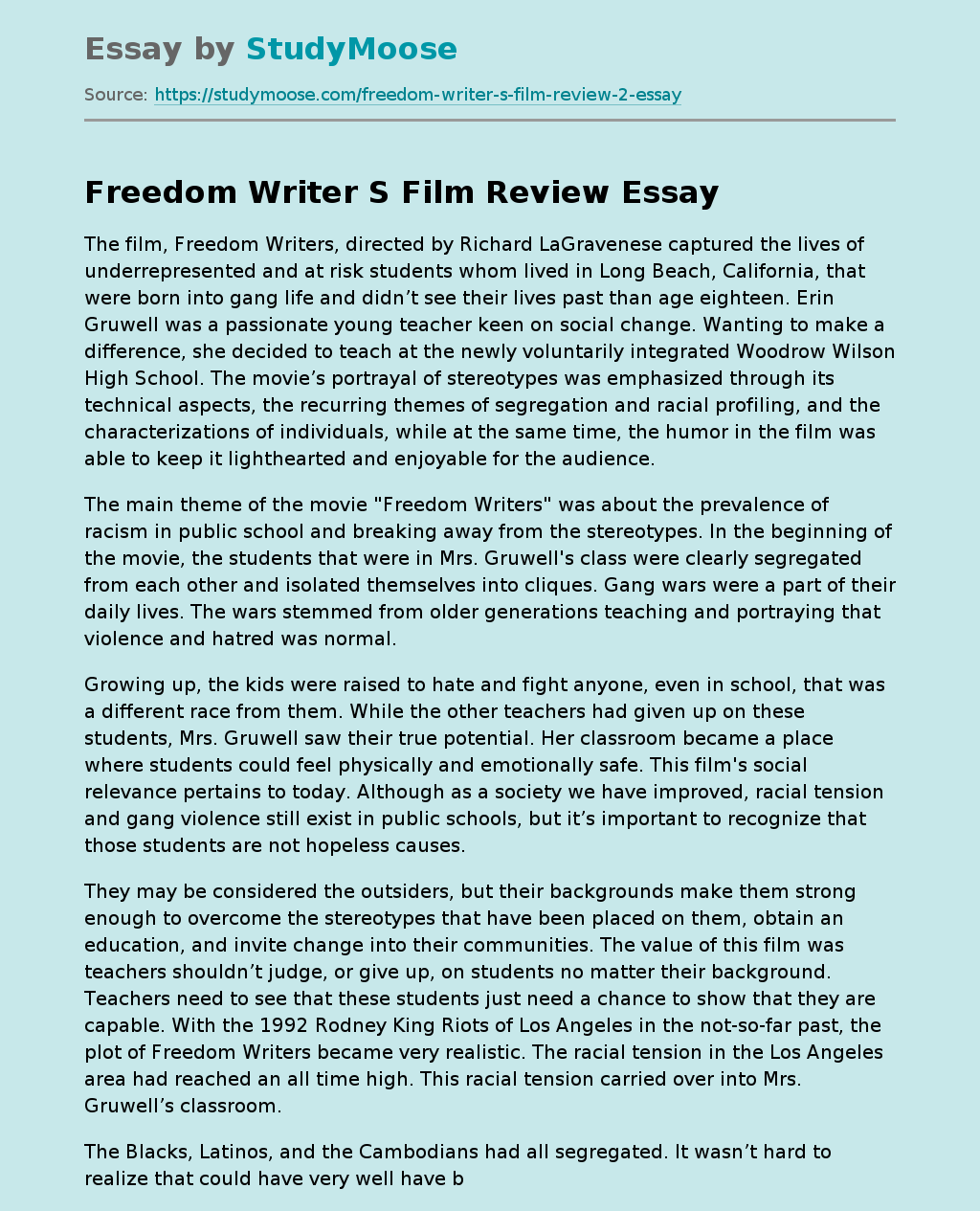