Milan Kundera’s The Unbearable Lightness of Being

In Milan Kundera’s novel, The Unbearable Lightness of Being, the author uses plenty of literary elements to tie together his points in an effort to help readers understand the basic premise behind the work. Though there are plenty of literary themes that can be found throughout the work, the most important ones are the themes that Kundera uses, as well as the characters in the novel. By creatively using these things in his work, Kundera helps explain what might have otherwise been a fairly complex ideal.

Don't use plagiarized sources. Get your custom essay on
“ Milan Kundera’s The Unbearable Lightness of Being ”
Get custom paper
NEW! smart matching with writer

In addition, the author is able to tie these things together to create a measure of clarity for readers as they progress through the work.

Theme is used in the novel to get across the basic ideas that the author is set on impressing into the reader. Since the novel relies mostly on ambiguous ideas to get across hard to find points, the utilization of different themes are critically important to the development of the story.

As one might expect from the title of the work, Kundera uses lightness and the idea of weight as one of the primary themes throughout the book.

Even in the title, one can see the dichotomy that exists. Lightness in itself is not something that should be too heavy to bear. Yet, the author is able to masterfully intertwine these two ideas to convey the point of his story. Through the entire work, the characters of the book are searching hard within themselves to find a solution to the primary question presented in the title.

Their search for the important things in life is done in order to both find meaning and relieve themselves of some of the heaviness that their being light creates.

Another important theme that the author uses is politics. Though the characters carry on with their lives throughout the work, they are constantly linked to both each other and to their collective pasts by their underlying political beliefs. A good example of this can be found on page 123 of the novel, when Sabina receives word that the political situation in Prague has cost Tomas and Tereza their lives.

The book reads, “She could not get over the news. The link to her past had been broken” (123). English expert Jay Braiman describes a literary theme as, “The main idea or message conveyed by the piece” (Braiman). It is clear in the story that the author uses both politics and the idea of weight as the main idea in the work. The desire to escape from the weight of life was something that drove each of the characters, while politics served as a main idea in trying all of the characters together.

Characters were the second literary element used by the author to create the work. Not only do the characters power the action, but they shed a little bit of light into the what the other characters were thinking. Simply having characters is not enough to establish something as an important literary element. As the author clearly understood, the characters must be used in the most efficient, useless way possible in order to help push the idea of the story forward. The characters in this novel are not just there for an arbitrary reason. Instead, they play an active role in the story in establishing the primary aspects of plot development.

A Eugene Knight book review of the work talks to the importance of the characters by saying, “The very fact that they stay together and seem to find some degree of happiness illustrates that an acceptance of a relationship that falls well short of satisfying and fulfilling hopes, is possible” (Knight). One can easily see that the author used the literary element of characters to tie in the many themes that he utilized and help the reader understand the underlying conflict in Czechoslovakia at the time.

Overall, the book is a commentary on the reasons why people need people so much. This is a complex idea to establish, especially when one considers the fact that it is set against such a tough background. Kundera established his excellent work on the basis that his characters would do the talking for him. Instead of having to explain things to readers to get them to buy in to the main point of the book, he had characters live out their real life experiences to get across the points.

Even more importantly than that, he was able to bring the characters closer to the themes that were so important to the author in this book. No one literary theme overtook the book or overpowered it. They all worked together in a sanctimonious harmony that not only told a story, but helped the reader interpret the story. The idea that a person who is too light could not bear that weight is a ridiculous one at first, but as the reader further understands the things that the characters are going through, they can begin to see how such a dichotomy can become quite a conundrum.

Knight, Eugene. The Unbearable Lightness of Being, Review. < http://bookreviews.nabou.com/reviews/unbearable_lightness_kundera.html>

Kundera, Milan. The Unbearable Lightness of Being. 4 May 2004. HarperCollins Publishing.

Milan Kundera’s The Unbearable Lightness of Being. (2017, Mar 16). Retrieved from http://studymoose.com/milan-kunderas-the-unbearable-lightness-of-being-essay 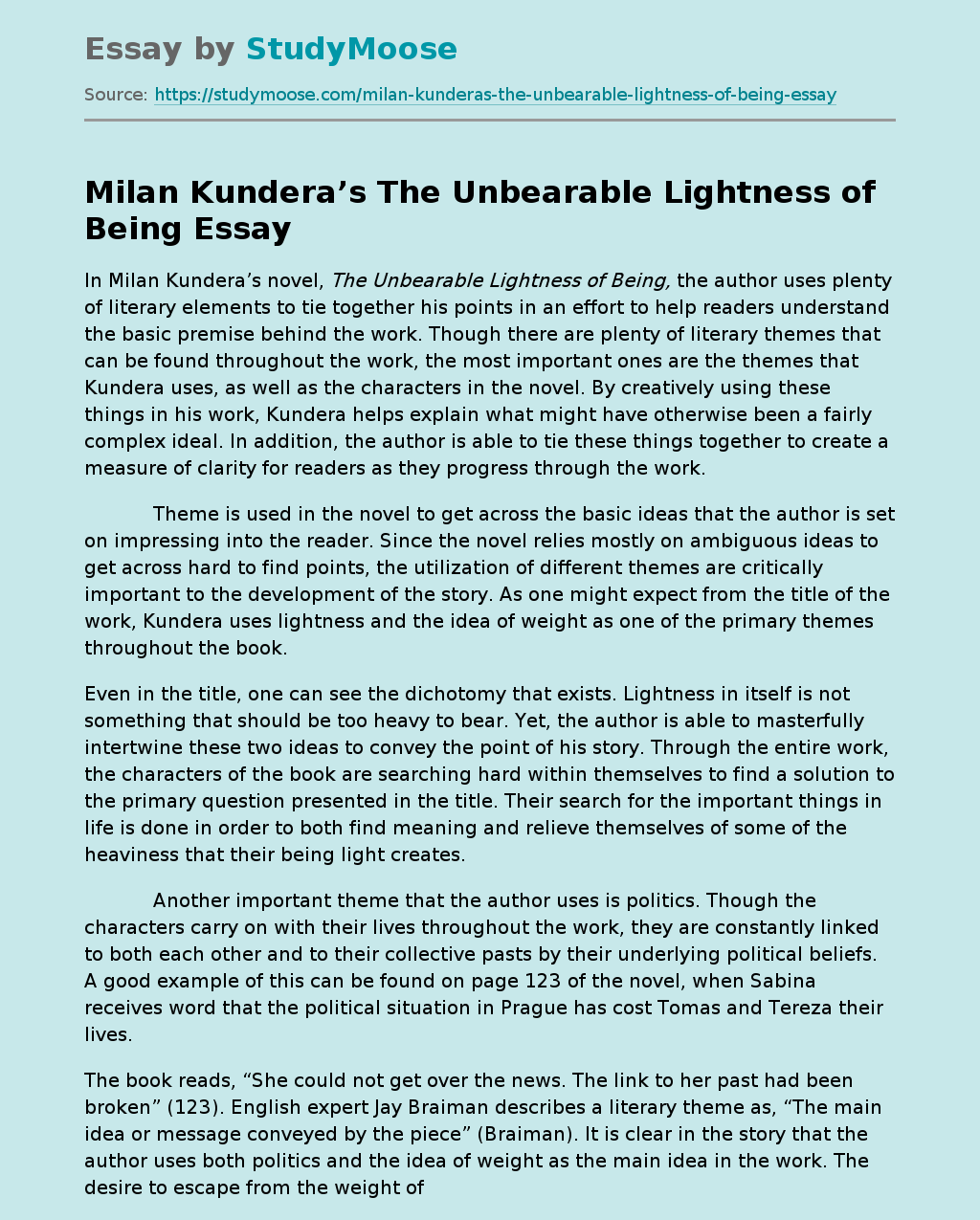