Fealty is one of the greatly-recognized values of the Anglo-Saxon world. Often defined as a type of loyalty or allegiance, fealty plays a more engaging and active role in Seamus Heaneys Beowulf than in the Anglo-Saxon poem The Dream of the Rood because of the way it causes action to be taken. Understanding the use of this Anglo-Saxon value can reveal its importance in Anglo-Saxon life and literature.

In Beowulf, the main character Beowulf uses fealty to empower him to perform heroic deeds.

Don't use plagiarized sources. Get your custom essay on
“ “Beowulf” by Seamus Heaney and the Anglo-Saxon poem “Dream of the Rood” ”
Get custom paper
NEW! smart matching with writer

This is shown through the actions that he makes: upon hearing of the attacks by Grendel, Beowulf rushes to the aid of Hrothgar, a friend of his father’s. Beowulf’s father, Ecgtheow, previously killed Heatholaf, a member of the Wulfing tribe. According to Anglo-Saxon terminology and law, a debt or wergild must be paid to the relatives of the victim. Unable to pay this manprice (StudyGuide.org), Ecgtheow fled to avoid war. Hrothgar healed the feud by paying (Line 470) this debt which caused Beowulf’s father to swear fealty to Hrothgar.

It is this fealty that his father made that encourages Beowulf to follow up on an old friendship (Line 376) and assist Hrothgar by defeating Grendel. Another example where Beowulf uses fealty to act heroic is the decision to fight the dragon. Although this occurs in the older phase of Beowulf’s life, his loyalty or fealty to the Geats as king of the people (Line 2513) obliges him to defend them, believing that its his duty. Conclusively, the utilization of fealty by Beowulf results in actions being carried out.

The Anglo-Saxon value of fealty is also used by other characters in Beowulf to execute intrepid actions. The greatest example of this is the aid shown to Beowulf by Wiglaf during the battle against the dragon. During this battle, Beowulfs sword fails him and hes in need of assistance from the eleven comrades personally chosen for the encounter. However, excluding Wiglaf, that hand-picked troop broke ranks and ran for their lives (Lines 2597-2598). Wiglaf was the only warrior of the band who stood by his lord. In a sign of respect toward the heroic ideal of the Anglo-Saxon world that states that he is obligated to fight for their lord to the death (StudyGuide.org), Wiglaf interferes in the fight and they eventually defeat the dragon. This principle demonstrates how fealty is significant to Anglo-Saxon life in the way it inspired Wiglaf to aid Beowulf. All in all, fealty is acutely used in Beowulf as a basis to which one could complete actions.

In Dream of the Rood, fealty is shown by the cross to Christ but it doesnt play an actual role in the poem because the cross is an inanimate object and cannot use his fealty to protect his lord. In a sense, the fealty in this poem is more idealistic than in Beowulf since the cross has the determination and the eagerness to aid Christ during the crucifixion but he cannot interfere. This willpower is illustrated when Christ was placed on the Cross in preparation for the crucifixion. The cross states that although the ground shakes, it “dared…not against the Lord’s word/ bend or break (Lines 35-36). That provides the notion that the cross has the intention to help Christ because it bending or breaking would hinder Christ; the cross, by announcing that it wouldnt do such a thing verifies its fealty. Therefore, fealty is used in the poem as a concept, not as a reason for action.

In conclusion, the application of fealty to the two Anglo-Saxon texts is evident but more significant in one then the other. Still, fealty contributes to both pieces of literature and its complex use exposes why it is so vital to Anglo-Saxon society.

Glenn, Jonathan A. “The Dream of the Rood.” University of Central Arkansas. May 2009 .

"Beowulf" by Seamus Heaney and the Anglo-Saxon poem "Dream of the Rood". (2016, Jul 27). Retrieved from http://studymoose.com/beowulf-by-seamus-heaney-and-the-anglo-saxon-poem-dream-of-the-rood-essay 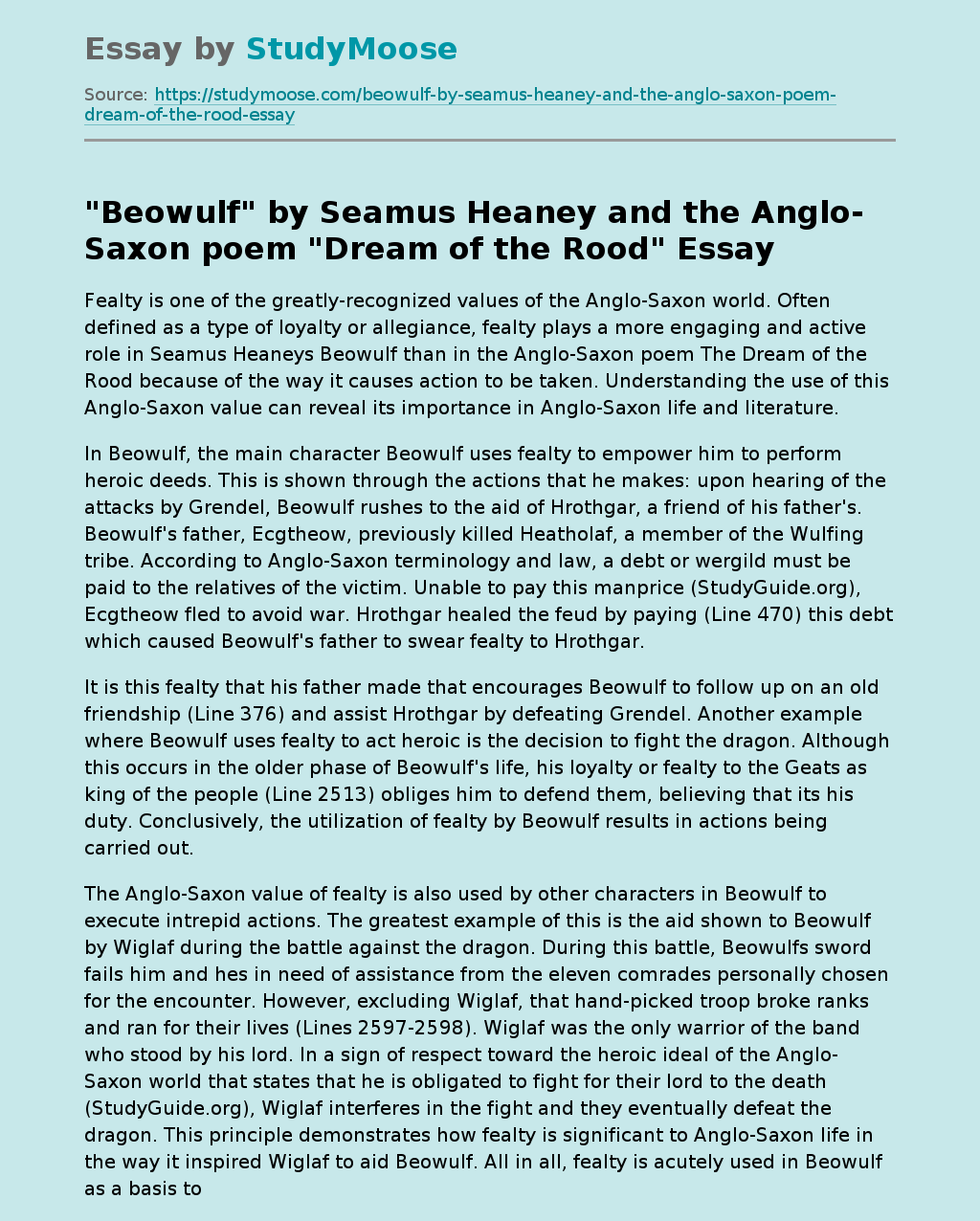