Benefits of Ip Camera over Cctv

An Internet protocol camera, or IP camera, is a type of digital video camera commonly employed for surveillance, and which unlike analog closed circuit television (CCTV) cameras can send and receive data via a computer network and the Internet. Although most cameras that do this are webcams, the term “IP camera” is usually applied only to those used for surveillance. There are two kinds of IP cameras:

Don't use plagiarized sources. Get your custom essay on
“ Benefits of Ip Camera over Cctv ”
Get custom paper
NEW! smart matching with writer

Decentralized IP cameras, which do not require a central Network Video Recorder (NVR), as the cameras have recording functionality built-in and can thus record directly to digital storage media, such as flash drives, hard disk drives or network attached storage.

IP Surveillance Systems are connected to your existing IP network or Virtual Private Network (VPN). They draw their power from the POE (Power Over Ethernet) Switches. They are intelligently controlled with Camera software that is easily accessible via a web browser from any computer with appropriate authorization.

This means authorized security personnel can easily monitor multiple location form a PC anywhere on your secured network or VPN.

Network cameras and video encoders can be configured and accessed remotely, enabling multiple, authorized users to view live and recorded video at any time and from virtually any networked location in the world.

This is advantageous if users would like a third-party company, such as a security firm, to also gain access to the video. In a traditional analog CCTV system, users would need to be at a specific, on-site monitoring location to view and manage video, and off-site video access would not be possible without such equipment as a video encoder or a network digital video recorder (DVR). A DVR is the digital replacement for the video cassette recorder.

In a video surveillance application, high image quality is essential to be able to clearly capture an incident in progress and identify persons or objects involved. With progressive scan and megapixel technologies, a network camera can deliver better image quality and higher resolution than an analog CCTV camera.

Image quality can also be more easily retained in a network video system than in an analog surveillance system. With analog systems today that use a DVR as the recording medium, many analog-to-digital conversions take place: first, analog signals are converted in the camera to digital and then back to analog for transportation; then the analog signals are digitized for recording. Captured images are degraded with every conversion between analog and digital formats and with the cabling distance. The further the analog video signals have to travel, the weaker they become.

In a fully digital IP-Surveillance system, images from a network camera are digitized once and they stay digital with no unnecessary conversions and no image degradation due to distance traveled over a network. In addition, digital images can be more easily stored and retrieved than in cases where analog video tapes are used.

There is often too much video recorded and lack of time to properly analyze them. Advanced network cameras and video encoders with built-in intelligence or analytics take care of this problem by reducing the amount of uninteresting recordings and enabling programmed responses. Such functionalities are not available in an analog system.

Network cameras have built-in features such as video motion detection, audio detection alarm, active tampering alarm, I/O (input/output) connections, and alarm and event management functionalities. These features enable the network cameras and video encoders to constantly analyze inputs to detect an event and to automatically respond to an event with actions such as video recording and sending alarm notifications.

Event management functionalities can be configured using the network video product’s user interface or a video management software program. Users can define the alarms or events by setting the type of triggers to be used and when. Responses can also be configured (e.g., recording to one or multiple sites, whether local and/or off-site for security purposes; activation of external devices such as alarms, lights and doors; and sending notification messages to users).

Network video products based on open standards can be easily integrated with computer and Ethernet-based information systems, audio or security systems and other digital devices, in addition to video management and application software. For instance, video from a network camera can be integrated into a Point of Sales system or a building management system.

A network video system can grow with a user’s needs. IP-based systems provide a means for many network cameras and video encoders, as well as other types of applications, to share the same wired or wireless network for communicating data; so any number of network video products can be added to the system without significant or costly changes to the network infrastructure. This is not the case with an analog system. In an analog video system, a dedicated coaxial cable must run directly from each camera to a viewing/recording station. Separate audio cables must also be used if audio is required. Network video products can also be placed and networked from virtually any location, and the system can be as open or as closed as desired.

An IP-Surveillance system typically has a lower total cost of ownership than a traditional analog CCTV system. An IP network infrastructure is often already in place and used for other applications within an organization, so a network video application can piggyback off the existing infrastructure. IP-based networks and wireless options are also much less expensive alternatives than traditional coaxial and fiber cabling for an analog CCTV system.

In addition, digital video streams can be routed around the world using a variety of interoperable infrastructure. Management and equipment costs are also lower since back-end applications and storage run on industry standard, open systems-based servers, not on proprietary hardware such as a DVR in the case of an analog CCTV system.

Furthermore, Power over Ethernet technology, which cannot be applied in an analog video system, can be used in a network video system. PoE enables networked devices to receive power from a PoE-enabled switch or midspan through the same Ethernet cable that transports data (video). PoE provides substantial savings in installation costs and can increase the reliability of the system.

Benefits of Ip Camera over Cctv. (2016, Nov 13). Retrieved from https://studymoose.com/benefits-of-ip-camera-over-cctv-essay 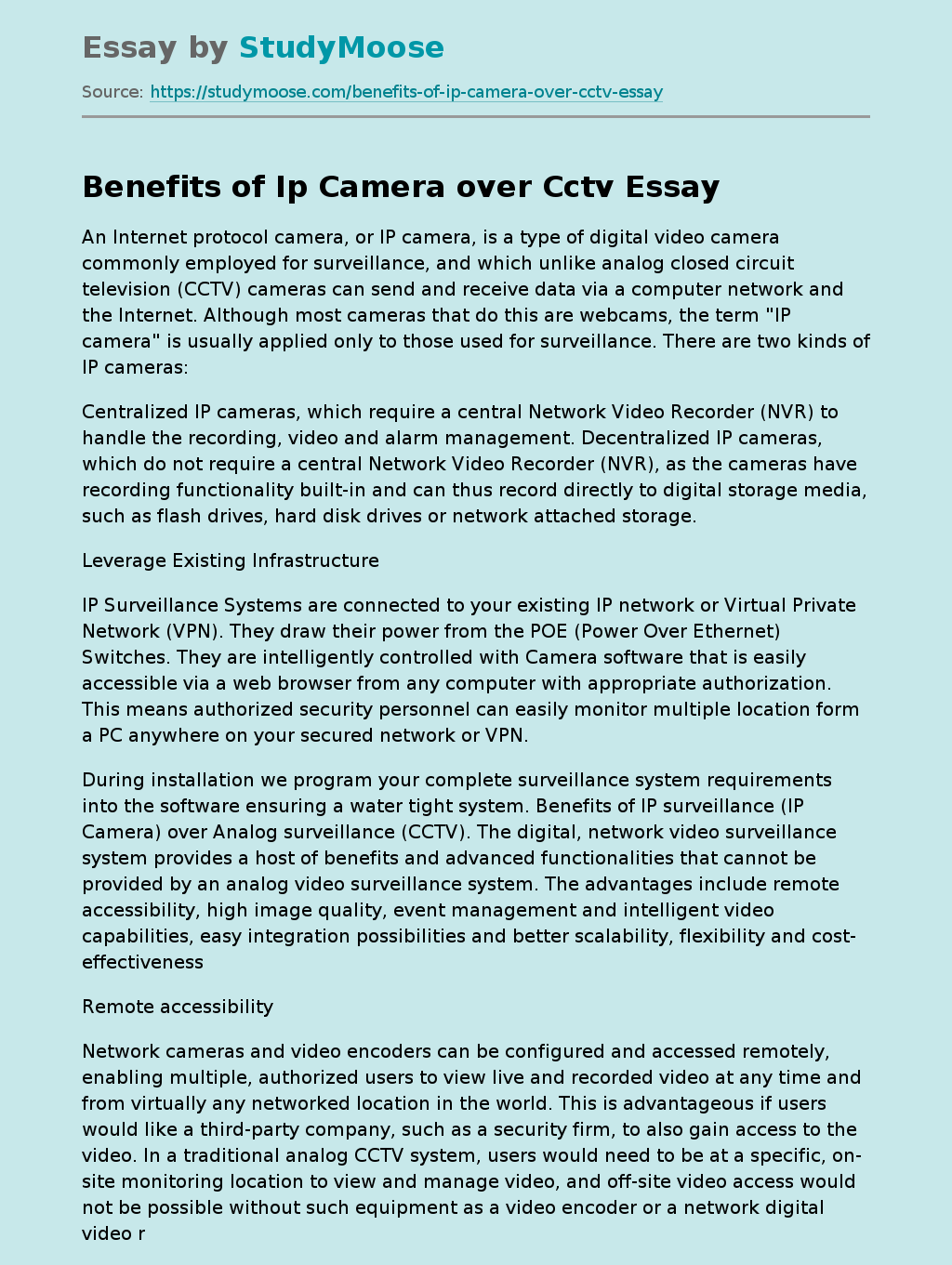