Surveillance is a close observation of a person or a group, especially one under suspicion for the purpose of influencing, directing, managing, or protecting. It creates both positive and negative effects. It is very useful for governments and law enforcements to maintain social control, prevent crimes, recognize threats, investigating criminal activity etc. There are different types of Surveillance for example, aural surveillance, Visual surveillance, tracking devices, Computer surveillance. Surveillance cameras are video cameras or in other word CCTV, which is used for the purpose of observing an area.

Don't use plagiarized sources. Get your custom essay on
“ Surveillance Camera ”
Get custom paper
NEW! smart matching with writer

They are often connected to a recording device or IP network, and may be watched by a security guard or law enforcement officer. Security cameras have become ubiquitous in many countries. They appeared only in banks and at high-security areas before, whereas now they are entering public places such as malls, streets, stadiums and transport. Originally surveillance cameras systems were installed to deter burglary, assault and car theft but their use has now extended to include anti-social behaviour such as littering, urinating in public, traffic violations, obstruction, and drunkenness.

A surveillance camera can operate 24 hours a day, seven days a week, 365 days a year without taking any break what so ever unless it is broken physically and it produces the result required. Cameras are also cost-effective and unobtrusive. Authorities do not need to spend large amounts of money on police. This is the cheapest strategy for law enforcements and security officers than any other crime prevention strategies. Surveillance cameras have several benefits. An obvious benefit is that the police can catch criminals in the act and also helps prevent crimes in future.

This will make the streets safer for ordinary people.

A more important point is that criminals, particularly young offenders or petty criminals will be deterred. They will not be tempted to carry out crimes, and thus society will be a lot safer. If surveillance cameras constantly monitor a retail business, criminals will likely seek an easier target. If employees know that they are constantly being watched, they are less likely to steal from their employer or waste time on the job. School children who know that their every move is being recorded may be less likely to carry guns to school or engage in criminal activities on campus.

Another advantage of surveillance cameras is that it helps maintain records. The images and videos captured by a surveillance camera system are often recorded and stored into a database. These are helpful in maintaining records so that they can be easily retrieved later, when needed. Investigation will be aided by the video. If an argument occurs between two employees, the employer can consult the videotape to determine what actually occurred. Camera surveillance systems recordings can serve as evidence. The employer can use the recorded videos to help solve the problem.

This situation is just one example of problems that can be resolved with an official recording system in place. There are many more situations that can be settled with the use of a security camera. In legal cases of thefts and other forms of crime, videos and images provided by the surveillance camera system can serve as a valid proof and evidence against the defaulter. This assists in making legal claims as well. It is not only used for evidence, it can be used to protect employee from an attack. Customer service employees are often required to handle angry or frustrated customers.

Face-to-face interactions with an angry customer can put the employee in physical danger. Surveillance cameras may save employees from harm by monitoring these volatile situations. They also serve as a deterrent from violent behaviour by these customers. This is particularly helpful in customer service centres. Surveillance camera system helps to identify such instances and act immediately. It is also helpful to keep a tab on the activities of the employees. It is used in school nowadays to stop children from doing wrong things or to deter from doing it.

However, security cameras are far from being a perfect solution. The growing use of surveillance cameras in today’s society has lead to several privacy issues being raised. Nowadays, surveillance cameras are used not only by the government but also by individuals and other private firms. The biggest objection concerns privacy. Many people feel that they should be free to travel or move around a shop, mall, street or country without being photographed or recorded. They feel that being watched constantly is like being in a jail, and that ordinary people are losing their freedom because of these devices.

This invasion of privacy is the major issue when it comes to any security system device like the surveillance camera system. As said before it is used in offices, banks, shops, malls, etc. Looking at it from one way, it protects the employees, helps maintain records, reduce theft. But it has a disadvantage too. Installation of surveillance cameras may decrease the employee morale and hampers productivity at times and it causes controversy. Most of the time, employees are against any change that increases their supervision.

Also note that there are laws governing these issues which may vary from state to state. In general, most states allow camera surveillance as long as the employees are properly notified of the operation. Not only in offices, is same thing applied in a school with students as well. Some students feel violate and extremely uncomfortable in the presence of cameras. Another point is that although the police say that only criminals have something to fear from the cameras, many people do not trust governments with too much information.

Corrupt authorities could use information in the wrong way or twist it to victimize some groups. Government may say that these cameras are being used to make people feel safe but never really know what else they can use the surveillance cameras for. They can be used for keeping an eye on other’s business or private property. Surveillance camera systems are not perfect. Although advancements in technologies have improved the features of the security cameras these days, it doesn’t mean that they always work the way people want them to.

Even if the surveillance camera is positioned correctly then there is no guarantee or it doesn’t necessarily mean that it will catch all crime or unwanted behaviour done in the area. These cameras can sometimes be thwarted by covering them up or by sticking a piece of chewing gum on the lenses. Someone who is familiar with the property may still be able to get around the surveillance and avoid getting caught. If the cameras are positioned incorrectly, the high traffic areas of the facility will not be shown on camera.

In this case, much of the behaviour that the CCTV cameras are designed to detect will not be captured on tape. If cost is an issue, installing a dummy surveillance camera is an inexpensive option that is effective in the prevention of crime. Surveillance camera system cannot monitor every area of your office or home at all times. Hence it cannot be considered as a foolproof method for crime prevention. The use of cameras have become so commonly used that it has affected people’s lifestyles in one way or another and banning of surveillance cameras is most likely not a viable option today.

By saying professional, surveillance cameras should only be sold to who have a license of owning it for their business purposes. One should not be able to buy a camera and install it where ever they want because people usually tend to spy on other’s business, property or private life. People must have their right to freedom, and this is not happening because cameras are watching them where ever they go or whatever they do. Although there are definite advantages to using surveillance devices such as cameras, we need to balance the need for security with respect for the individual’s privacy and freedom. 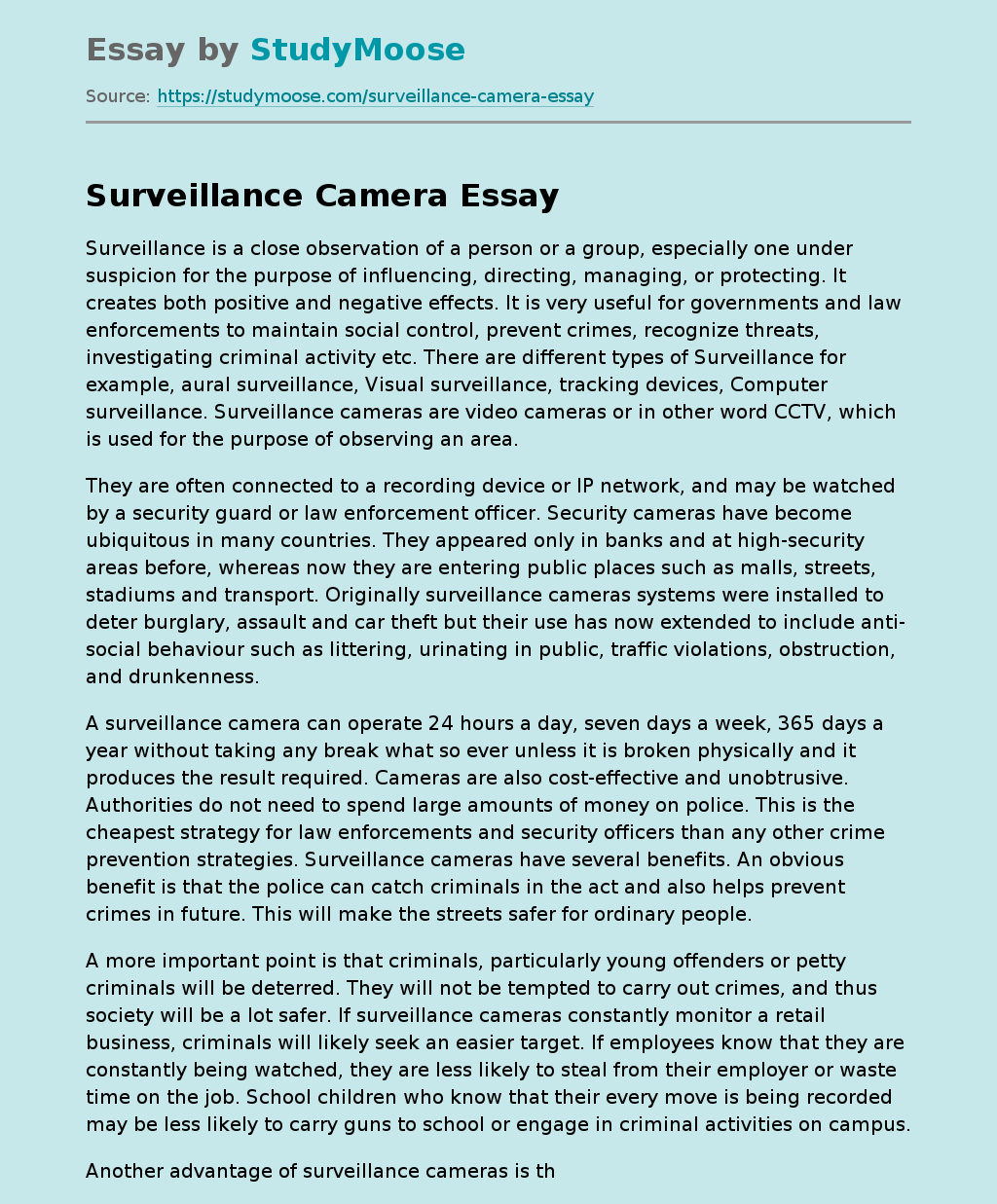