Ones understanding of social identity is instrumental in constructing a sense of individual identity. It is dependent on our circumstances in particular our interaction with others and our own perceptions between connection and disconnection. This idea can be explored through a selection of famous poems written by Emily Dickinson in the 1800’s namely, “The saddest noise, the sweetest noise”, “This is my letter to the world and “ I was hungry all the years”. The 2010 film Black Swan, directed by Darren Aronofksy displays masterful use of film techniques to emphasize and illustrate the themes of good versus Evil, Seeking Perfection and Nature versus Nurture throughout the film.

Don't use plagiarized sources. Get your custom essay on
“ Belonging in Film Black Swan and Dickinson’s Poem ”
Get custom paper
NEW! smart matching with writer

Belonging to oneself is often the hardest challenge a person has to face, through its ability to both destroy and fulfill. Emily Dickinson’s poems portray this struggle as she tries to understand the world around her while struggling to find herself. In Dickinson’s poem “The saddest noise, the sweetest noise” we get a glimpse of the paradox derived from the poem about the fine line between what is sweet and what is painful.

The poem uses nature as a link to belonging through the description of ‘the saddest noise, the sweetest noise’ of birds. The sound is used to consume the reader in the mindset that brings on a sense of both sadness and loss. The persona finds herself separated from those she loves and this is contrasted with the happy, sweet song of the birds, echoed with the lines ‘it makes us think’.

The saddest and sweetest noise is an explanation of the world around her but also the juxtaposition of sweet and sad within herself. In a more contemporary society Nina draws her sense of self from the stereotypes of civilisation.

Black Swan directed by Darren Aronofsky is a psychological thriller portraying a production where the renowned Swan Lake is performed. The main character Nina is depicted as grappling with her sanity, ultimately compelling the audience to consider the many prevalent key themes explored in the film such as Good Vs Evil and the pursuit of perfection. Black Swan attempts to move responders into the mind of Nina, bringing them to feel and understand her struggle and pain. Aronofsky’s use of handheld tracking shots is effectively utilized to enhance and portray his key themes. The handheld tracking appears to control Nina in many scenes throughout the movie making her vulnerable and entices the audience to feel that she is being sought after. This technique makes it clear to the audience that Nina is trying to escape from the evil force that is gradually consuming her and taking control of her life. This particular film technique assists in highlighting to the audience Aronofsky’s themes of mental instability and the transformation from Good (symbolized by the White Swan) and Evil (symbolized by the Black Swan). The erratic movement from the hand held camera highlights to the viewer that Nina is delusional, physically and mentally unstable, as the dark presence she is escaping from is fictitious.

Dolly shots were also another film technique that Aronofsky utilized in the film to highlight his themes. The opening scene in the movie is Nina dreaming of herself dancing as the Swan Queen. This initial scene highlights her desire for perfection. Use of dolly shots is evident in this scene as the camera tracks and focuses on the detailed movements of her feet, highlighting the movements required for success. There are no faults in each small, agile step and this illustrates Nina’s desire of perfection. The smooth nature of the dolly shot illustrates her fluidity as she dances. The theme of seeking perfection permeates Black Swan as the main drive for Nina’s success and ultimate demise. There is a parallel to Dickinson, who looked for perfection and solace in nature but her inability to connect with society became an insurmountable obstacle that she never overcome.

Throughout Black Swan we see Nina’s struggle to belong through her own perceptions. Her circumstance is dependent on her own achievements and dreams, not the interaction with others and the sense of belonging. This much like Emily Dickinson is a key idea highlighted in Dickinson’s poem ‘This is my letter to the world”

This poem depicts Dickinson’s seclusion from the word at large. The poem delves into the perception made in Dickinson’s clouded mind about the world around her. She depicts a distance from other, ‘they never wrote to me’. Immediately suggesting her perception of disconnection from world that never tried to understand her. She appears to be an isolated figure in the face of the world and her lack of connection with others is finally suggested in the last plea, ‘judge tenderly of me’. The addition of this plea to the final lines of the poem prescribes an immediate negative connotation from readers. Dickinson does not indicate a change in herself, however she is asking for the ‘world’ to think with care about her and her place. This fragile and vulnerable poem is merely a concealment of the strength Dickinson withholds, much like that of Nina in Black Swan. Both these texts depict a clear perception of their disconnection with society but are however an understanding of their unique qualities.

Black Swan is a film that challenges the audience, constantly blurring the lines between reality and imagination, much like Dickinson’s dense metaphoric poems. Duality is shown throughout the film with strong contrast between black and white. With purity in the color white is contrasted with the devil color black, depicting good and evil. As belonging to oneself is a struggle, Aronofksy clearly depicts this through Nina’s battle to achieve the Black Swan, which essentially becomes her alter ego. This struggle comes from her inability to seduce and trick which, as an effect is exactly how the film makes the audience feel. The cinematography in the film is much like ballet – tight and perfect however this sense begins to unwind as the movie moves to a close. A montage is used to capture fast shots that vary in angles and length so that the viewer loses any sense of what is occurring and becomes overwhelmed by the loud, fast music that mirrors the speed of the shots. This highlight to the viewer that Nina has lost control and no longer has the restraint and discipline that comes with ballet.

Throughout the montage several snippets of the black swan contrasting with the white swan show clearly to the viewer the transformation and her change in behavior which reflects the expectations of her mother and deprived upbringing. The comparison between deprivation and hunger can be used as a clear link between Black Swan and Dickinson’s poem ‘I have been hungry all the years’. Dickinson uses an extended gastronomic metaphor to depict a fulfilling life chasing the pursuit and attainment of love. Her elegantly elaborated process of dining portrays this however the metaphor is merely a basic literary technique emphasizing the speaker’s estrangement from such fulfillment. Dickinson contrasts herself to the descriptive love feast with “wine” and “ample bread” to ‘I had been hungry all the years’. The extremity of hunger is coupled with the extended time period of years, to suggest her deprivation from the fulfillment of life from birth. Belonging to oneself stems from our own perceptions between connection and disconnection and both Dickinson’s and Darren Aronofsky’s 2010 film Black Swan, portray this theory to a crystal clear extent.

Ones understanding of social identity are instrumental in constructing a sense of individual identity. In conclusion both texts demonstrate the key idea that belonging to oneself comes from first – an understanding of the world. Dickinson’s isolation was a calculated choice, much like that of Nina. This decision sprung from their dedication to their arts and an understanding of the world outside their mind. It defines the idea that our perceptions of connection and disconnection are crucial in the discovery of oneself. 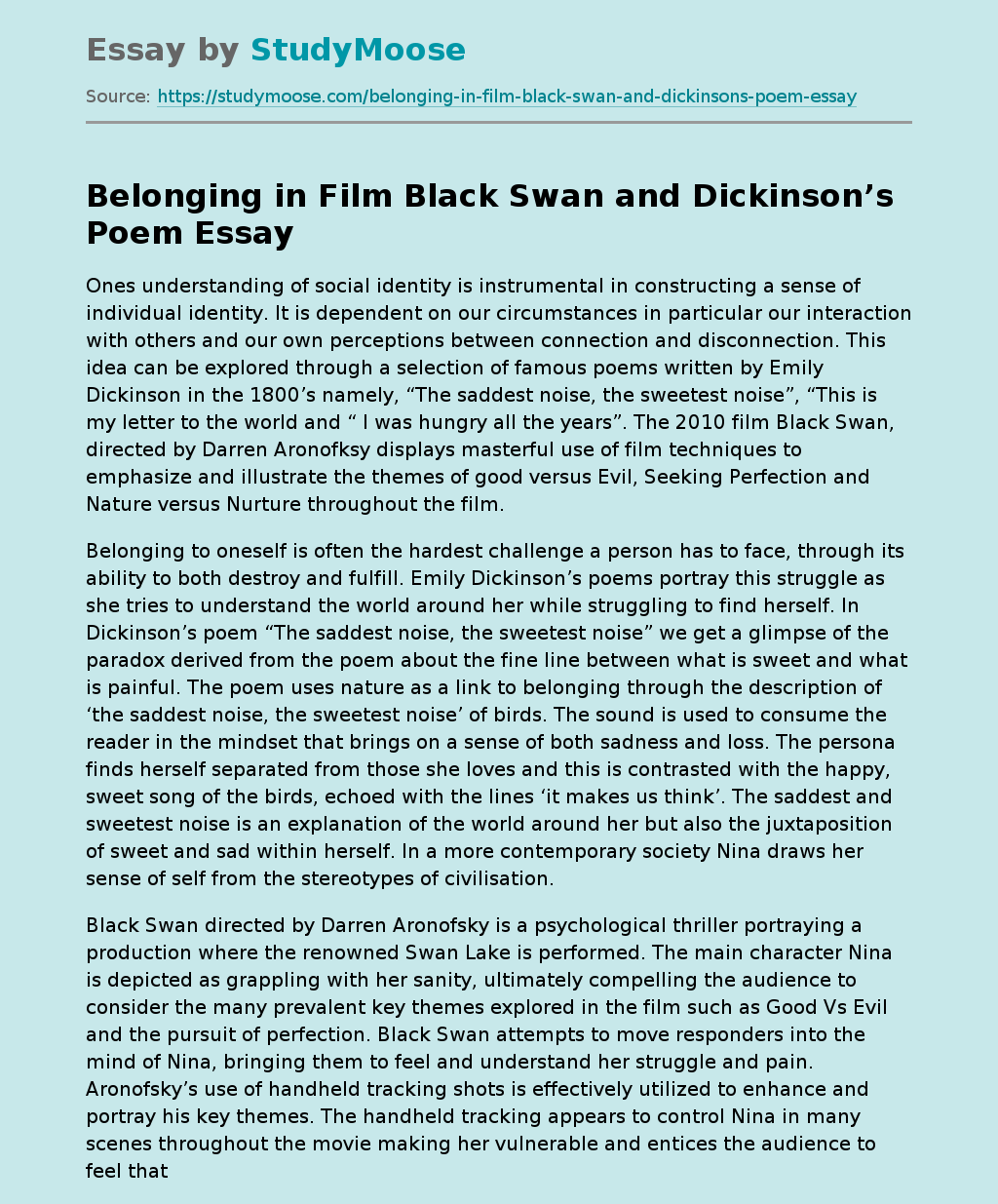