Being Rebellious Gains Nothing: Romeo and Juliet

In Romeo and Juliet by William Shakespeare, there are occurrences that cause the two lovers to rebel against various things which can prove disastrous in the end. Romeo and Juliet is a play where two lovers are caught in the middle of family feuds and even though they have to sneak around, they will stop at nothing to be together. They both go against basic rules that are set by their families, the law, and their own judgment. They will do anything to be together and do not realize the consequences of their actions.

Get a verified writer to help you with Being Rebellious Gains Nothing: Romeo and Juliet

Although Romeo and Juliet believe they should do whatever they have to do in order to be together, their rebellion against family, laws and rules, and personal judgment proves foolish in the end because it causes their tragic deaths. Throughout their lives, Romeo and Juliet have been controlled by their families and in order to be together, they end up rebelling against their families wishes which contributes to their deaths.

Juliet’s parents only want what is best for her. While they want her to get married to a nice man, she wants no part in the marriage because she wants to be with Romeo.

Her parents do not know that she wants to be with Romeo; all they know is that she is being obstinate about marrying the nice man they have picked for her. Juliet says, “He shall not make me there a joyful bride! ”(3. 5. 122). She is talking to her parents about how she refuses to get married to Paris, the man they want her to marry, but she will not tell them why all she says is that she does not want to be married.

Once her father hears this, he is beyond furious and tells Juliet that if she does not agree to get married he will kick her out and even if she is homeless on the streets he will just walk past her.

Even after her father says this, Juliet is still persistent about being with Romeo when she says, “I’ll to the Friar to know his remedy/ if all else fail, myself have power to die” (3. 5. 254-255). She would rather die to be with Romeo and give up everything she has ever had in her life, than just go along with her parents’ wishes. Juliet betrays her parents when she fakes her own death, and she does all of this because she wants to run away with Romeo. If Juliet had not of rebelled against her families’ wishes, she would have most likely been married to Paris, not dead.

Romeo and Juliet are willing to do anything to be together, even though in the end some of the choices made to rebel against the law cause their tragic deaths. The Capulet and Montague families are continually involved in fights and recently the Prince told them if they were even in another fight, whoever is involved will be killed. After this proposition is made, Tybalt starts a fight where Romeo ends up killing Tybalt. This fight violates the Prince’s rule and Romeo did not want to kill family even though he could not tell anyone he was family.

The Prince’s rule is clearly stated when he says, “Three civil brawls bred of an airy word/ by thee, old Capulet, and Montague,/…if ever you disturb out streets again, your lives shall pay the forfeit of the peace”( 1. 1. 91-99). Over the past weeks there have been three fights between the Montagues and Capulets and the Prince says whoever is in the next fight will pay; Romeo is ironically trying to stop a fight because of the rule and ends up breaking the law and betraying Juliet by killing a member of her family. Killing Tybalt not only breaks the law, but also means that he will be on the run and unable to see Juliet.

Romeo goes on the run because Benvolio says, “Romeo, away, begone! / the citizens are up, and Tybalt slain/ stand not amazed. The Prince will doom thee death/ if thou art taken. Hence, be gone, away”(3. 1. 138-141). Benvolio is single handedly telling his friend to break the law and flee the scene, which just encourages Romeo to sneak around and see Juliet. No one wants Romeo to get hurt or get in trouble because he is just trying to break up a fight, but what no one knows is that if he is on the run he cannot see Juliet either.

Because of Romeo being banished, he can no longer see Juliet unless they sneak around, lie, and try to run away; if they had followed the rules in the first place they might not have been in this debacle. Romeo and Juliet thought they were in love and would do anything to be together; ultimately trying to be together leads to their unfortunate deaths. The biggest thing Romeo and Juliet rebel against, which leads to their deaths, is their own judgment. They both know in their minds that what they are doing is not right, but the feeling of love, true or not, overrides their personal judgment.

Romeo and Juliet make comments on how rash and quick their decisions are, but often contradict themselves later. They know the risks of their relationship, but they think they are in love and nothing can stop them. Romeo says, “Then love-devouring death do what he dare,/ it is enough I may but call her mine”2. 6. 7-8, but Friar Lawrence replies, “these violent delights have violent ends”(2. 6. 9). Romeo does not care what happens to him and even though he knows in the back of his mind the results will probably not be good he still just wants Juliet.

All he cares about is making Juliet his no matter what the costs are or no matter what he thinks. Even though Friar Lawrence says this ambition to make Juliet his may have a terrible end, Romeo does not care at all. He does not care what happens and his carelessness may have ended up killing him and Juliet. Juliet is the same as Romeo and does not listen to herself. She says, “It is too rash, too unadvised, too sudden”2. 2. 125 but several lines later, Juliet says, “if that thy bend of love be honourable/ thy purpose marriage, send me word to-morrow” (2. . 151-152).

She knows that she does not want or need to get married, yet somehow Romeo convinces Juliet that they need each other with his poetic way of speaking and even though she clearly knows this is an immediate and unreasonable decision she still says she will marry him. In the back of their minds they know what is right, but choose to do what they want to do instead. Throughout their relationship, Romeo and Juliet make many quick decisions that go against their personal judgment and most likely cause their terrible deaths.

Romeo and Juliet rebel against many things in their relationship that include families, laws and rules, and personal judgment which cause their deaths. Even though Romeo and Juliet are kids and may have actually been in love, they made poor decisions regarding how to deal with their relationship. Juliet completely rebelled against her parents’ wishes of her getting married to Paris and would rather die than marry Paris. Romeo and his friends ignore and blatantly disregard laws and rules put in place to keep order in their town.

Being Rebellious Gains Nothing: Romeo and Juliet. (2017, Jan 27). Retrieved from https://studymoose.com/being-rebellious-gains-nothing-romeo-and-juliet-essay

Get a verified writer to help you with Being Rebellious Gains Nothing: Romeo and Juliet 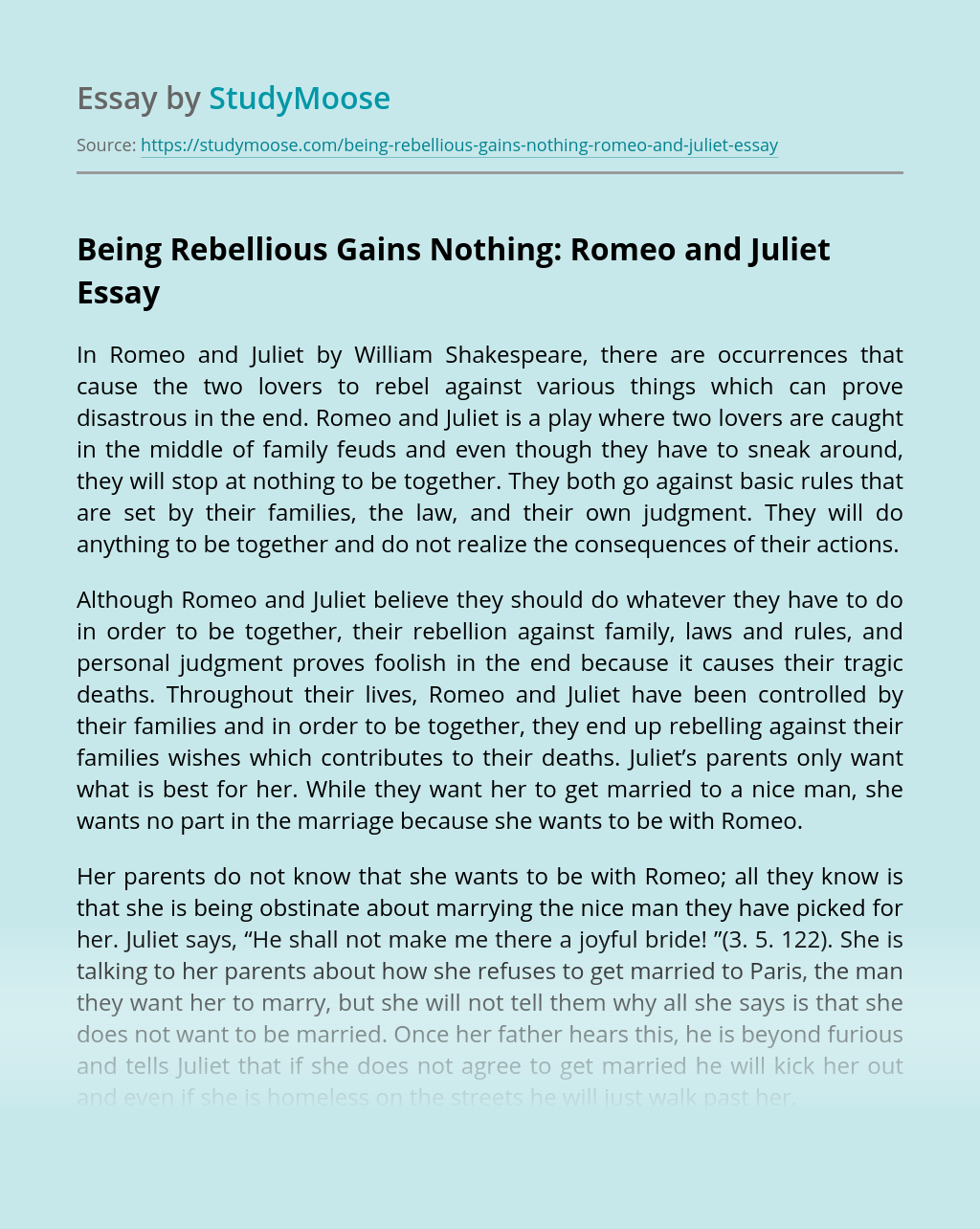 Juliet is the daughter of Lord and Lady Capulet, a wealthy and well-respected family. Although young and members of opposing families in a long-standing feud, Juliet and Romeo fall instantly in love with each other, and marry in secret. Her parents remain unaware of their relationship, and are determined that she marries Paris; it is...

The fathers and daughters relationships in Shakespeare drama and literature have attracted a great deal of scholarly attentions specifically in the influence of feminist criticism. There is an apparent shifting affection towards fathers and daughters when the latter struggle to negotiate a passage into adulthood and marriage with their father’s blessings, and when the fathers...

The Betrayals in Romeo and Juliet

In the early stages of Romeo and Juliet, the Montague parents send Benvolio to discern the cause of Romeo’s melancholy. They intervene in his relationship, but in this case it has no long-lasting effects. During Romeo’s relationship with Juliet, adults again intervene; sadly, though, in this case the effects are deeply felt and much more...

Aspects of love - Romeo and Juliet

Now Juliet’s father has a leading role in Juliet’s “love life”. In Verona the people were catholic and it was to have arranged marriages. With Juliet as a young teenager, Capulet thought she might have been too young to get married; Capulet- “My child is yet a stranger in the world; She hath not seen...

Examine the role of women in Romeo and Juliet

Shakespeare wrote the play Romeo and Juliet in the 16th century, a time in which the role of women was not to be a person in their own rights, but to be a wife to their husband and a mother to their children. Women had a specific place in society, and they were expected to...

Bob Keeshan encourages parents to be the ultimate role models

Bob Keeshan encourages parents to be “the ultimate role models for children. Every word, movement, and action have an effect. No other person or outside force has a greater influence on a child than the parent.” Depending on how a child is parented, their mental health will vary; parents are one of the biggest causes...