Don't use plagiarized sources.
Get Your Custom Essay on Behavior In Difficult Situations Just from $13,9/Page

This is an automatic response for survival. (Sheryl Ankrom, What Causes Panic Disorder?, 2014) Facing calmly refer to managing without disturbance. However, most situations arise usually can be solved by man. It is just that how people response to the situation does matter. Similarly, no matter how people choose to live, it is inevitable that they will face different kinds of obstacles and difficulties along the life time.

In times of difficult situation, some people react calmly and others react with panic. Almost every decision they choose to make in a difficult situation are certainly affecting to their surroundings. Some people react calmly and others react with panic in crises have major factors particular in experience, characteristic and environmental factors. A significant factor is experience. People who have more experiences in something usually react calmer than the people who have less experiences. As human beings are all the same when it comes to facing difficulties. No one in this world is able to react calmly if he or she did not undergo the difficult experiences in life. The challenges they been through every time enhance their abilities to take control on the situation. To emphasize, they are able to identify the risks and to analyze the circumstances vitally in difficult situation. Thus, they need more experiences in order to grasp of the situation as habitually so that they become the master.

For example, when a person being lost in the jungle while hiking, if he did not know or aware of what to do when a person got lost in the jungle, it may definitely freak him out on that moment. But what can be done before hand is that he needs to learn more about the common skills regarding on jungle survival. Only by learning and gaining more experiences on the skills will he be able to use them effectively and to react calmly to the dilemma. On the other hand, people who have less experiences are likely to react with panic, as they have only little knowledge on certain issues. They normally fail to adapt the situation and defeat by the stress. In addition, characteristics are one of the factors that make people react calmly and with panic in a difficult situation. People who have “can do, get it done” attitude are likely to react calmly in crises. “Nothing builds a picture of success more than achievement, and achievement is the number one factor that motivates just about everyone across all cultures.” (Dr. David G. Javitch, 10 Qualities of superior leaders, 2009).

In other words, it says that they are agility and have greater self-composure to tackle the uncertainty situations. Also, the importance is they have to think before they act. During difficult times, people who react calmly will pay attention on their demeanor, they remain the calmness to ease the adversity. Moreover, maturity play a huge role in a difficult situation. To illustrate, in terms of emotional flexibility wise, people are able to see the difficult situation uniquely and then adapt their own style. Subsequently, courageous also act as a bonus towards tackling crises steadily. It triggers them to seek alternative solutions to fight back the panic behaviors. The aspect of standalone spirit enable them to remain proactive and positive in any given situations. For instance, when a plane wreck, the passengers have to have the attitude to stay focus and think what they can do instead of panic. To calm their mind is to calm their heart.

They must know that if they react with panic, the situation will only get worse. Additionally, the people who react calmly and with panic may due to the environmental factors. In specifically, such as family backgrounds, how a person behave is the reflection of his surrounding’s people who he encountered with every day. Family members are the major role models for a person to learn from. If a family background were always in tense situation like dysfunctional family. Especially, living in which family members fight against each other will have higher chance to react with panic in a difficult situation. Besides, environmental factors will also cause the group of people to react with panic if the situation was never happen in their life before. It triggers them the fear and avoidance of the unknown situation and leads them to feel intense feeling of dread. For example, natural disaster, the earthquake happened in India Ocean in 2004 which affected Malaysia.

Being living in the country which has less natural disasters. Particular, this unexpected environmental factors, the people from the affected area are unable to cope with the instant loss. People went through the panic symptoms like the trembling or shaking. The societies which face the adversity may need longer time for resilience. On the other hand, cultural is also one the factors that may cause the individual to react in panic such as the students who go study abroad. When they switch and meet the different culture backgrounds, they might not understand on some rules and regulations for a culture.

Soon, the appearance of the panic symptom like sweating is usually the sign that they are facing a difficult situation. In short, everyone is the writer, the producer, the director of his life. No matter how difficult the situation that one faces, one is responsible for the actions. In a difficult situation some people tend to react calmly while others react with panic have the factors that do with experience, characteristic and environmental factors. Panic is part of the life. There will be no need of calmness if panic is not exist. Should we also appreciate of what panic reaction has given “life” to us? 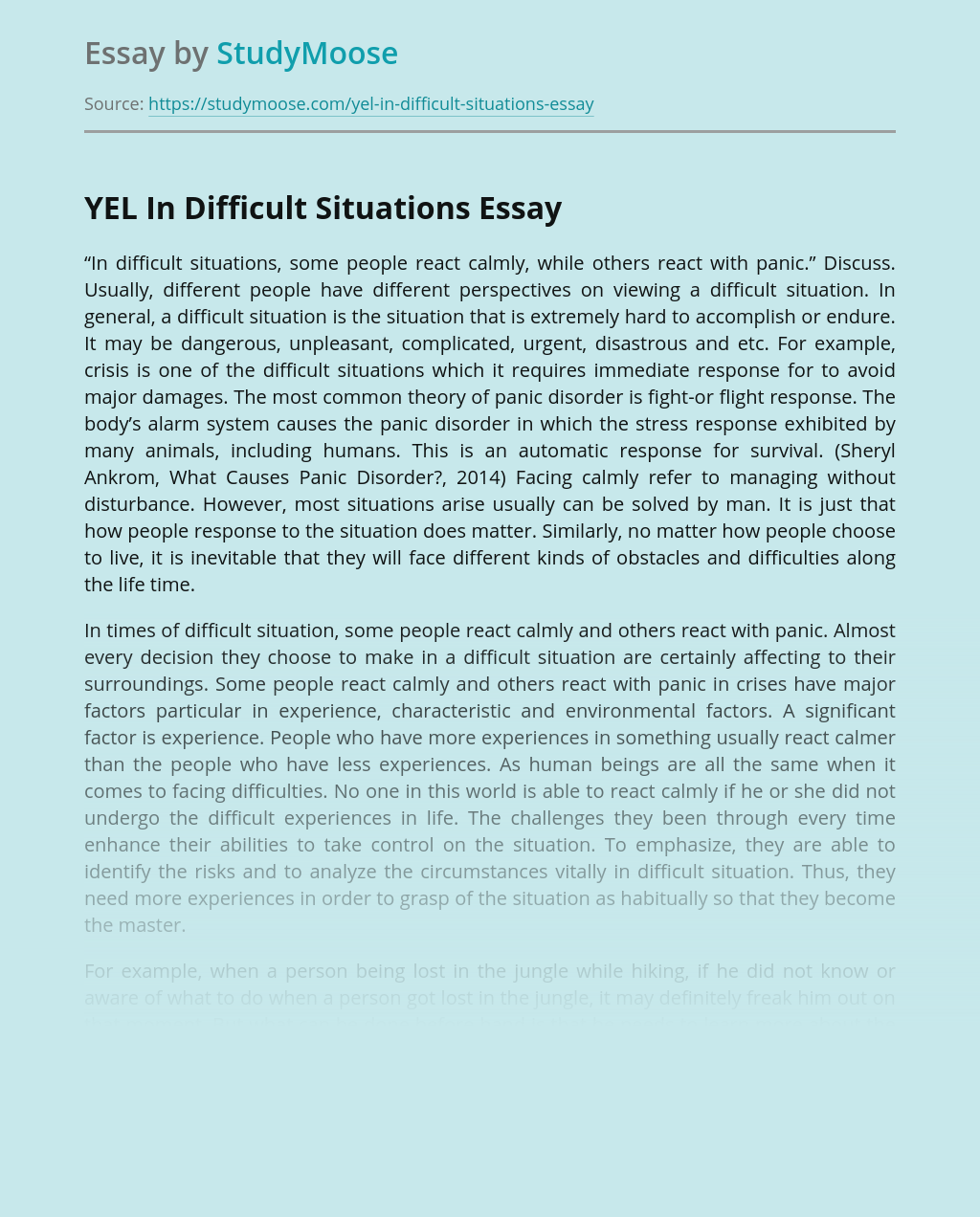 There is an essential occasion that happens in everyone’s life. That essential event may be a variety of things. Such as someone winning the lottery or even having an awful loss in the family. My essential event in life was the day I dominated my fear of heights. Everyone has some type of worry or...

Get Essay
Atelophobia: fear of imperfection

Atelo means not being good enough and phobo means fear. Atelophobia: fear of imperfection. While a great number of us aim to be perfectionists, some of us take it too far. This could lead to obsessive-compulsive disorder, which is definition of person making their life perfect. If they couldn’t achieve the absolute best, it may...

CASE ANALYSIS: TUESDAYS WITH MORRIE I. Synopsis Morrie was Mitch’s favourite instructor. He was identified with amyotrophic lateral sclerosis, or ALS. One night, Mitch saw and acknowledged his old teacher in a tv program. He suddenly remembered the pledge he made with his instructor, so he called him to establish a visit. Mitch started checking...

What is the Beck Anxiety Inventory

The Beck Anxiety Inventory (BAI), created by Dr. Aaron T. Beck and other colleagues, is a 21-question multiple-choice self-report inventory that is used for measuring the severity of an individual’sanxiety. The BAI consists of twenty-one questions about how the subject has been feeling in the last month, expressed as common symptoms of anxiety (such as...