Batas Militar, commonly known in its English translation as “Martial Law”. As stated in the 1973 Constitution of the Philippine Republic that the Prime Minister as the Commander-in-Chief may declare Martial Law under the same conditions, “in case of invasion, insurrection or rebellion, or imminent danger thereof, the public safety requires it.

The President however, using this provision may corrupt the Military forces and become hostage of ambitious Generals who may want to exercise power through a puppet President, without corresponding responsibility.

Don't use plagiarized sources. Get your custom essay on
“ Batas Militar – Martial Law in the Philippines ”
Get custom paper
NEW! smart matching with writer

This provision as written in the Article VII, Section 10, Paragraph 2 placed the entire Republic of the Philippines as defined in Article I, Section 1 of the Constitution of the Republic during the Marcos Regime is the root of the Proclamation 1018 that has been executed on September 21, 1972 and remained in force until January 17, 1981.

This proclamation also suspended the Writ of Habeas Corpus, this suspends the human rights of an accused person to be fight for what he believe is right in front of an authority, but instead his fate depends upon the attitude of the President towards him.

On the first days of this proclamation, I believe the country responded well, because they also believe that the Philippines is sick, rebellion against the government has been in power in some rural places and communist armed forces are trying to invade the nation.

But I also believed that the authority who is Ferdinand Marcos during that time exceeded to his limitations as the head of state. During the Martial law, Marcos amended the constitution for several times and I believe he used this for his own good.

They put into prison those people whose only objective is to say what they think is right and what they think is best for the nation. Democracy and human rights has been violated during this time, not to mention the allegations of corruption and violation of its own constitution has been brought to the face of President Marcos. The most influential person to be put into prison is Sen. Benigno “ninoy” Aquino. He’s against the Marcos regime and its corrupt performance.

He’s death is the eye opener of the Filipino people who is frightened and afraid to speak out against the Marcos administration, but before that, after he was put into prison, he was exiled to the United States of America, and because of love of country and people and also, maybe, because of his desire to be the next president of the Republic he returned back to his homeland and face the consequences, he was assassinated at the tarmac of Manila International Airport and after how many years named after him and was known nowadays as Ninoy Aquino International Airport.

The Impact of Martial Law on the Philippines

There were lots of insights, points of view and arguments to whether martial law had negative or positive effects to politics, economy, society and culture of the Philippines. Some may say that martial law was the darkest episodes in the country’s very recent past and some may applauded Marcos for imposing such system that results to a more “disciplined Filipinos ”. But most of them who experienced martial law, considered it as one of the horrible memory of the past. Impressive at first, but on the latter part caused pain in way that a leader betrayed his fellowmen.

Politically speaking, Marcos’ dictatorship and “crony capitalism” had a great impact and it contributed to a less competitive and an incompetent government. Marcos appointed his friends, families and to people that he has an “utang na loob” even though these are not qualified and cannot fulfill their duties well. This closed the door for those who are much competent and the one that the Filipino people needed, for 20 years Marcos and his cronies owned Filipino people which gave a hard time attaining stability. Although he has nice visions for the future, programs for economic development, concerning farmers, the tourist sector, and even improvement in infrastructures were not properly planned that resulted to the Philippines to have debt-driven-growth.

Masagana 99’s outcome was rice production dramatically increased from 4.4 million tons to 5.5 million tons in the first year of the program and by 1978; the Philippines became self-sufficient in rice. In fact, it even began exporting rice. Marcos created the Department of Tourism to intensify the tourism industry in the country. This industry did not only generate employment but earned foreign exchange for the country from tourist receipts. World-class hotels, convention and cultural centers and tourist amenities were constructed. Public beaches, resorts, gardens and parks, golf courses were developed. Historical and cultural sites were, likewise, preserved. With all these plus, the world-renowned Filipino hospitality, tourism became the fourth largest dollar-earning industry in the country.

It provided for the training of students not only for military service but also for civic welfare and law enforcement under the direction of the Ministry of National Defense. But because of his close relationship to the U.S. he tends to borrow a lot of money that amounted to $28 billion during his term which is far from a less than billion dollar before his term. Despite having such achievement during his term, lasting effects became superior among them all, on the latter part Philippine suffered from a large amount of debt that until now government is still paying for this.

I believe there’s a much lasting effects when we talk about “culture”, people suffered, they were torture and forced to shut up. That’s why when we attain democracy; we’re like hungry for freedom, starving for a more comfortable way of living. Martial law was not just about suffering, let us accept the fact that Marcos also done such good things in improving Philippines, but the wrong thing there is that the way he governed and implemented Martial Law. There’s no such perfect government or leader, what is important today is that we don’t waste the lessons that we learned from our past so that the tendency to repeat it will be avoided. And with this, we can appreciate the kind of freedom we have right now.

I certainly believed that during the Martial Law era, not to mention the good things that this proclamation brought to us such as discipline, obedience and loyalty to the one who is in power. This proclamation of Martial law has been used by the authorities in such a way that the citizens of this nation will hate them, violating their own constitution, corrupting the money of the people, corrupting the rights of the citizens, corrupting the minds of the military whose prime objective is to defend the nation and not to hurt it citizens.

Martial law brought back the love of country and desire to have democracy not dictatorship of the one who is power. Martial law opened the minds of the citizens to move, to join, to fight, and to love freedom. Human Rights should not be sacrificed just to obtain a common goal. In order for us to move forward, we should set our goals and vision with due respect to the rights of the citizens and respect to our own constitution. 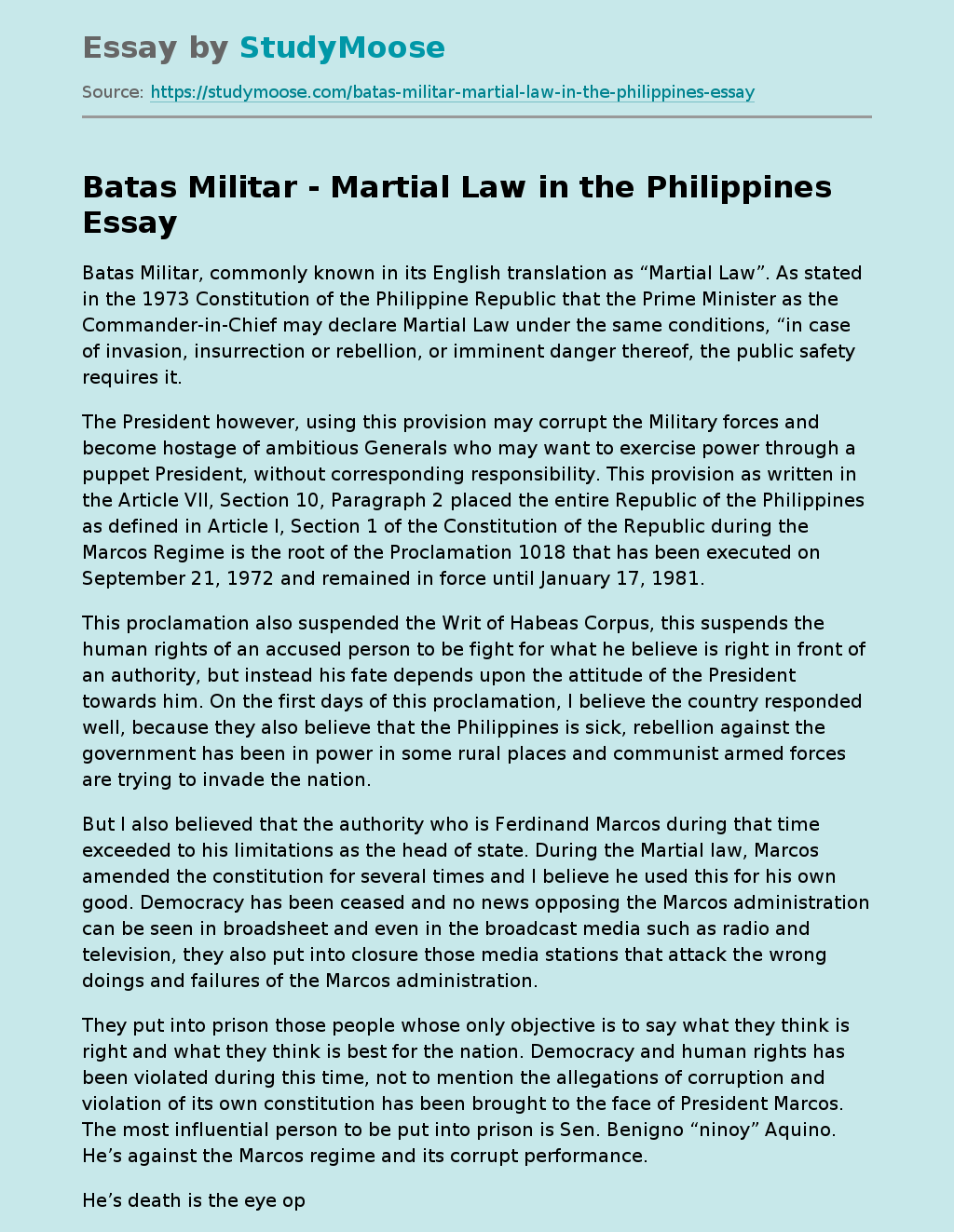