1. Diagnose the underlying causes of the difficulties that the JITD program was created to solve. What are the benefits and drawbacks of this program? Just In Time Distribution is a unique idea that the logistics director wanted to implement at Barilla. It was in response to the significant fluctuations in sales demand that Barilla was experiencing from their distribution centers. Exhibit 12 in the case shows how volatile the ordering could be. It looks very unpredictable using their current method of distribution, which is causing excess inventory and stockouts.

Don't use plagiarized sources.
Get Your Custom Essay on Barilla JITD Program Just from $13,9/Page

By nature, their pasta products experience waves of high and low demand. Seasonal and promotional fluctuation was making it hard for Barilla to correctly forecast demand from their distributors. Furthermore, distributors did not have effective forecasting methods. They simply ordered their shipments when their stock was getting low. Barilla had no minimum order quantity nor did they have standing orders with distributors. Essentially, JITD was created to better supply distributors with their product to eliminate stockouts and excess inventory.

Stockouts cost the company valuable sales revenue when demand cannot be met and excess inventory results in additional holding costs. The major benefit to JITD is a steady revenue stream after demand fluctuation is mitigated.

2. What conflicts or barriers internal to Barilla does the JITD program create? What causes these conflicts? As Giorgio Maggiali, how would you deal with these? Support organizations within Barilla met the JITD proposal with resistance. Marketing and Sales departments each had separate concerns. If Barilla had an internal disruption in production such as a strike, distributors would have no excess inventory and stockouts would be likely. The Sales team pointed out that promotional periods would not have a place in this new supply chain model. Also, with a lack of inventory in the distributors holding area, there was a concern that competitors would move in to take the space, eventually pushing out Barilla. Because of the highly specialized manufacturing parameters that were required to produce Barilla products, inflexible production lines did not allow for meeting demand that changes often. Support organizations such as Sales and Marketing also had selfish concerns.

With JITD, the need for sales representatives decreased to virtually nothing. After all, the forecast data that Barilla would in theory have, would essentially sell the products themselves. As the director of logistics, Maggiali must present a favorable business case along with his Just In Time Distribution proposal. He must show the benefits that his plan would have on each of the supporting organizations to gain their support. His proposed JITD is a complete shift in Barilla’s business model. For this reason, I would present this method as a case that will increase sales revenue, lower manufacturing cost, and increase quality operations. Selling his management on these three aspects will allow them to see the increased profitability that will come as a result of JITD.

3. As one of Barilla’s customers, what would your response to JITD be? Why? As a customer of Barilla and distributor of their product, I would greatly appreciate the service that Barilla has offered to provide because I would see the opportunity that this proposed plan has the potential to offer. From saving floor space to cutting down on my lead times I would be a willing partner in their plan. I would, however, force them to sign a third-party proprietary agreement before handing over my demand and sales data. It is important that competitors not know the specifics of our operations as to keep my competitive advantage in the marketplace. 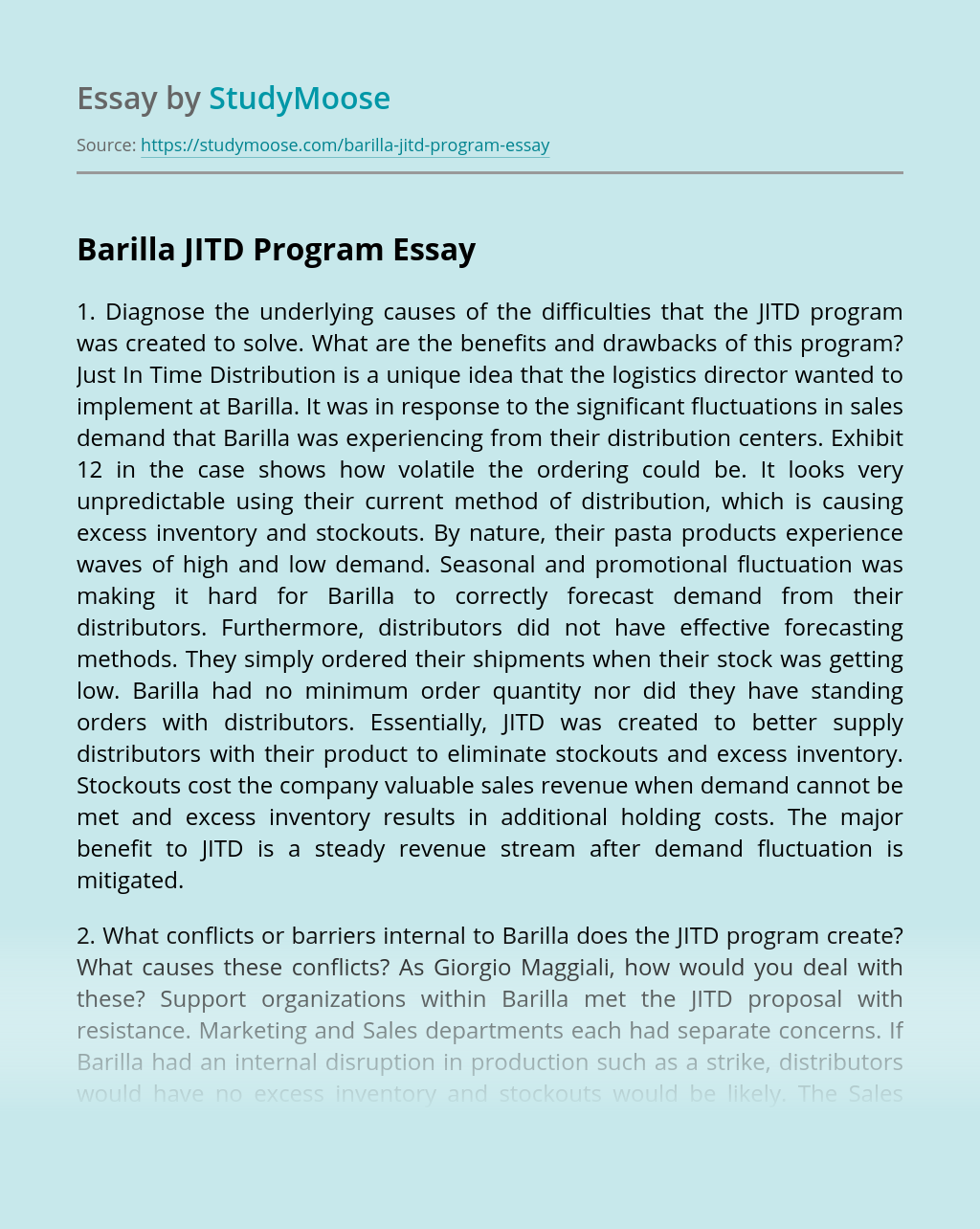 As I get further and further along in this simulation, I have noticed that I am beginning to understand what it takes as a marketing manager in order to be successful. Careful considerations must be made to be sure that the right decisions benefit both Minnesota Micromotors, Inc., and our customers. Our success comes from...

As a latecomer in Korean credit card market, Hyundai Card has gradually increased the market share since it entered the business in 1999. With its tie with Hyundai motor group, the company branded itself as “Hyundai M Card”. It started off by attracting buyer to consider using the card to purchase Hyundai automobile by offering...

Analyzing Consumer Markets Since marketing starts from the customer, it is of primary importance to understand the psyche of the customers and their buying motives. This chapter talks about the various behavioural patterns that govern the decision making process of a customer. A marketer needs to understand these factors affecting the customer’s purchase decisions so...

Abstract Virtual leadership and the use of virtual teams has been around for approximately one decade. The advancement of technology, the decline of the business economy, and the urgency to attract and retain knowledgeable human resources with the retirement of the Baby Boomers are reasons multiple organizations now employ a virtual workforce. This paper will...