Atticus Finch In Harper Lee's To Kill A Mockingbird

In Harper Lees To Kill a Mockingbird, Atticus plays a major role in his children growth and development. He is a role model to his children and to Maycomb, one of the few willing to take actions against prejudice. His actions can be summed up in one great quote of Thomas Jeffersons These truths we hold to be self-evident: that all men are created equal, that they are endowed by their creator with certain inalienable rights. Atticus does not approve of racism, and teaches his children to judge by character, not race.

Don't use plagiarized sources. Get your custom essay on
“ Atticus Finch In Harper Lee’s To Kill A Mockingbird ”
Get custom paper
NEW! smart matching with writer

Atticus thinks that even black men have at least one right, the right of justice. He expresses his belief in this phrase. But there is one way in this country in which all men are created equal- there is one human institution that makes a pauper the equal of a Rockefeller, the stupid man the equal of an Einstein, the ignorant man the equal of any college president, and that, gentlemen is a court.

(Lee 205) This quote shows Atticus passion for justice and equality, saying that all are equal in this court, and that you should judge a man by his economic or mental aptitude, nor by the color of his skin. He means by this statement that you should be unbiased and fair when making a decision, or even a persons fate.

Atticus believes all people have their flaws and strengths, and should be judged as such, not by their gender, social standing, or color. He shows this in a moving quote, You know the truth, and the truth is this: that some Negroes are immoral; that some Negro men are not to be trusted around women – black or white.

But his is a truth which applies to the human race and to no race in particular. (Lee 204) Atticus once again sets the scales of equality even with this statement, explaining his moral code of justice, and how each and every person should judge each other equally. Jems breakdown whenever the court room is mentioned is evidence of this point.

Atticus believes that any man using a man of any other color is inferior even to the man he is using. He illustrates this a talk with Scout, Youll see white men cheat black men every day of your life, but let me tell you something and dont you forget it-whenever a white man does that to a black man, no matter who he is, how rich he is, or how fine a family he comes from, that white man is trash. (Lee 220) Atticus means that if you take advantage of someone or treat them as though they were Less equal, then you, yourself, are you are a horrible, inferior person. On the other hand, if you treat everyone as your equal then they are your equal.

Atticus believes in what Martin Luther King later put to words in his famous I Have a Dream speech, That men would not be judged by the color of their skin, but by the content of their character. Throughout To Kill a Mockingbird Atticus has been a role model and mentor to his children by condemning racism and all that it stands for.

1. Harper Lee’s To Kill a Mockingbird2. The Declaration of Independence, Thomas Jefferson3. I Have A Dream, Martin Luther King Jr.

Atticus Finch In Harper Lee's To Kill A Mockingbird. (2016, Jul 18). Retrieved from https://studymoose.com/atticus-finch-in-harper-lees-to-kill-a-mockingbird-essay 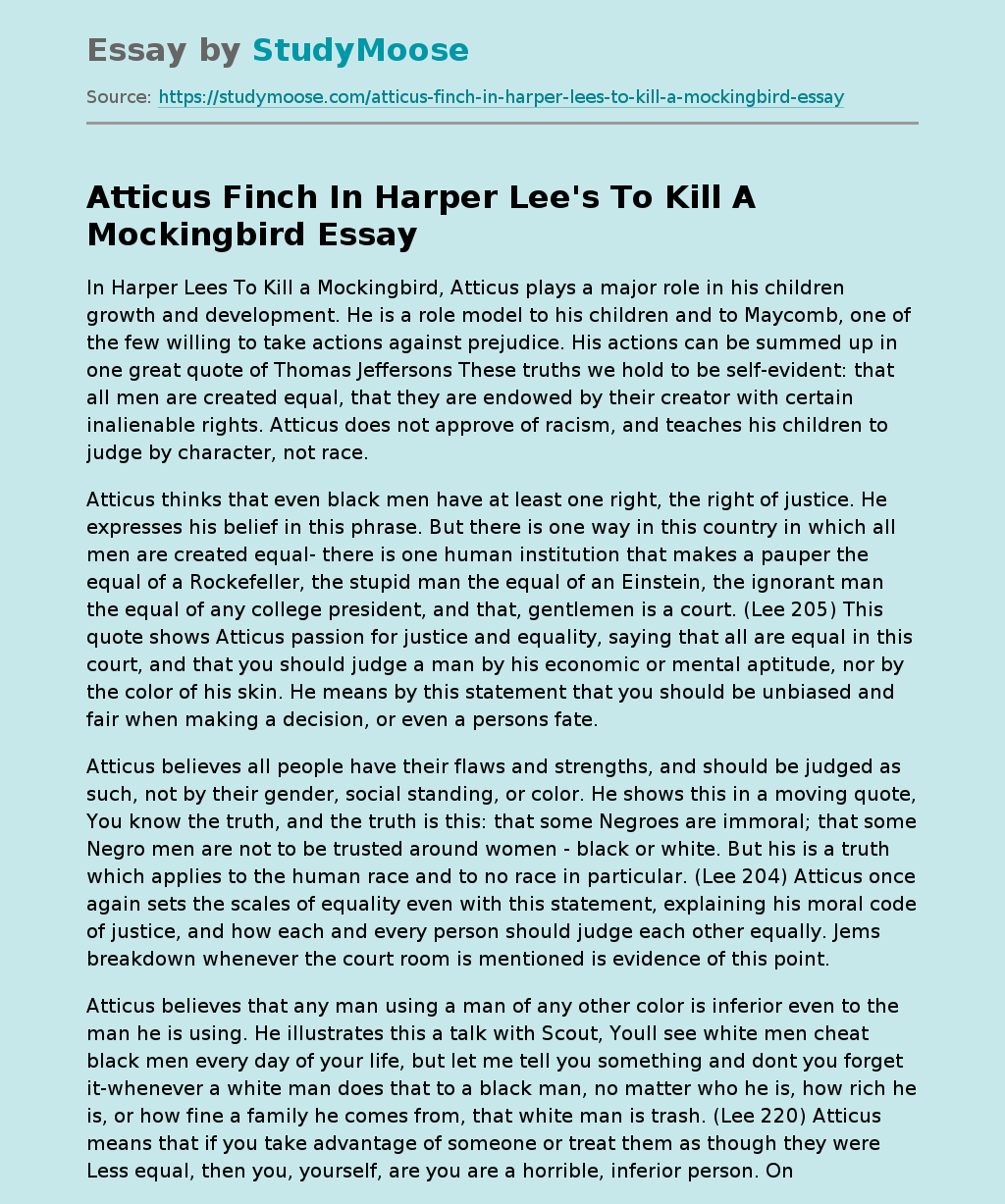