When I think about artistic profession I often wonder why artists want to be artists. The very idea of beginning every day with the obligation to create something of strong value, something that never existed before, seems really hard work and at the same time activity that has a strange beauty in itself. How does an artist engage in the creative process and make something-out-of-nothing to come into existence? How does the creative process begin? Does it have structure, or the creative process consists just of imagery and an elusive sparkle that lights the creative fire in the artist’s mind?

I spent a lot of time examining professional life and work of many creative artists and how they are engaged in the creative process.

This paper will make some generalizations about creativity and genius that are fundamental to the understanding of the creative process and then will analyze the creative process in the lives of four notable artists who are Langston Hughes, Alvin Ailey, Quincy Jones, and George Lucas.

The Creative Process Creativity is a constantly stimulating process and ultimately causing excitement. To observe and experience it fully is some of the most gratifying aspects of the artistic life and professional activity. One of the possible difficulties of exploring or analyzing the creative process is that it can become uninspired. Really, one of the most recent debates in this sphere is whether or not creativity is simply an instance of rational and analytical problem solving or consists of other, more magic processes.

A general distinction is that the creative product is the output of the artistic activity. It is the artistic output that is to be determined as creative or not creative. What are the characteristics of a product that is considered as creative? Torrance (1988), for example, in an analysis of definitions of creativity, stated that newness is a principal defining characteristic of the creative product. Newness, however, is not the only criteria. It is also of great importance that the product is good (that is, artistically appealing).

Vernon (1989) proposed a more comprehensive definition of the creative product stating that, “Creativity means a person’s capacity to produce new or original ideas, insights, restructuring, inventions, or artistic objects, which are accepted by experts as being of scientific, aesthetic, social, or technological value” (p. 94). It can be seen that cultural values and norms are a necessary part of the criteria for considering some artistic output to be creative. A major question then that emerges is “what are the creative processes that lead to the creative output?

Although the stages proposed by Wallas are generalized and global, his model provides a good foundation for the understanding of the creative process. This two-stage model involves the following creative processes:

In this stage the artist gathers different information, becomes thoroughly proficient, and identifies the problem. It is in this stage that the fundamental techniques and knowledge base for realization of a particular goal are mastered. Usually, the fundamental cognitive processes of logic, associations, and creative problem finding should be primary in this first stage.

The first creative problem finder I would like to mention is named Langston Hughes. Like many other noble artists, Langston Hughes found problems to solve with art. Langston Hughes found problems to solve with his creative writing. He loved to communicate with people and observe the sights and sounds of his district in Harlem and then incorporate this experience into his works. The artist found many fascinating ideas for poems during this process. Actually, some of his most renowned poems tell about the things he perceived with his creative mind and people he met in Harlem.

In the same manner, Alvin Ailey found problems to solve with his own choreography. Thus, for example, Ailey made Afternoon Blues (1953), his first creative dance work. Working with a musical piece from Leonard Bernstein’s On the Town, Ailey performed the hypersensual, animalistic role of the Faun (Latham, pp. 481–482). In this great work of the artist, Ailey produced a mental image of dance as a liberation from heterosexual white domination, he found a safe place in his creative work where he could travel into his inner world as a fully sensual human being free from usual problems of race and sexuality.

Another example of problem solving by the artist is Ailey’s creative reaction to Horton’s death (he was Ailey’s mentor): the artist decided to make dances that tell dance stories about dear people he knew. He created his first choreographic works to “pay tribute to Lester Horton, to demonstrate the strength of James Truitte, and to emphasize the beauty and dramatic ability of Carmen de Lavallade” (Latham, pp. 485–486). Ailey was creative problem solver: “I knew nothing about making dances for a group so I put everything about modern dance which I had read or seen into the work.

In addition, I did everything the way that I thought Lester would have done it…. I was just trying to be like Lester because I thought that was the way to be creative” (Latham, p. 488).

In this stage of the creative process ideas are generated using the analytical thinking and logical working on the problem. It is in this stage that Wallas introduced the process of the unconscious associations. Creative problem solving is not consciously made, but much organizing in a different way and free associating takes place outside of conscious awareness of the artist.

In the next sections, there are several descriptions of creative artists and their experience in this illumination stage. During this process thoughts are permitted to roam in an uncontrollable manner. It is here that creative processes may play a particularly important role. Artist may want to examine works of the past centuries or creations from different cultures for generating new images that are based on the already created idea. This type of exercise can be thought of as an essential part of the analytical and associative skills necessary for the creative process.

To better understand how this works let us examine the history of film that is full of analogical and associative thinking. One of the most famous and popular examples of movie creativity is George Lucas’s original Star Wars film of 1977. The success of the film is legendary. Moreover, it completely changed how movies are produced. Interestingly, none of the visual images that the film producer used during the writing of the plot were themselves original.

Film observers state that most of Lucas’s imagery was taken from previous film stories and George Lucas himself admits that his original models were the Flash Gordon movie serials and Edgar Rice Burroughs John Carter of Mars series of books: “I wanted to make an action movie – a movie in outer space like Flash Gordon used to be. . . . I wanted to make a movie about an old man and a kid. . . . I also wanted the old man to be like a warrior. I wanted a princess, too, but I didn’t want her to be a passive damsel in distress” (Interview with George Lucas).

It seems that the screenwriter wanted to return to the sense of wonder and adventure movies that had expired him as he was a child but to update that sense for popular tastes of contemporary public and make good use of all the technological and cinematic new methods and devices that developed in the period that had passed since Flash Gordon. He one can see how Lucas was truly creative in this stage by incorporating in Star Wars the myth narrative; the screenwriter used a creative analytical and associative thinking and he succeeded.

But this process was not a burst of inspiration; it evolved over a five-year period of rewriting and editing of the script: I began writing Star Wars in January 1973 – eight hours a day, five days a week, from then until March 1976, when we began shooting. Even then I was busy doing various rewrites in the evenings after the day’s work. In fact, I wrote four entirely different screenplays for Star Wars, searching for just the right ingredients, characters and storyline. . . . What finally emerged through the many drafts of the script has obviously been influenced by science fiction and action adventure I’ve read and seen.

And I’ve seen a lot of it. I’m trying to make a classic sort of genre picture, a classic space fantasy in which all the influences are working together. There are certain traditional aspects of the genre I wanted to keep and help perpetuate in Star Wars (Zito 1977, p. 13). Important analyses on the cognitive processes involved in the creative process have been performed by a number of researchers. For example, Sternberg (Sternberg & Davidson, 1982) gave emphasis to the importance of insight in creative process.

Sternberg and Davidson (1982) indicate that three types of insights are found in the creative process. First, the artist selectively separates relevant from irrelevant images. Selective union of separate parts brings about synthesizing isolated pieces of images into united wholes. In this way images are organized in new ways. This type of information gathering sets the stage for creative insights. Usually, creative artists have been transformed, have been inspired by, and often have plagiarized the ideas of other artist and from various cultures through the whole of history.

This process can also be seen in Ailey’s work that echoed literary traditions of black cultural heritage, registering “the existence of a ‘black self’ that had transcended the limitations and restrictions that racism had placed on the personal development of the black individual. ” Incorporating African American tradition and culture, Ailey’s creative work became an embodiment of African American culture. The artist’s creative process into concert dance was built on African American works and childhood memories.

Ailey wrote about Redonda, later retitled Cinco Latinos (21 December 1958) that: “The innate sense of melodrama of the primitive ritual is exploited in this interpretation of an Afro-Brazilian fetishistic ritual, with movements based on both the sensual and animalistic elements of these rites” (Ailey program note). Ailey succeeded in the connecting the whole generation of African-American individuals with the mainstream U. S. culture. It is perhaps the ability to shift between stages that is important to the creative process. Such ability allows the artist to gain access to creative cognitive and affective processes.

It enables the artist to transform or revise what he or she knows and to find new patterns. Like so many others in his time and after, creative record producer Quincy Jones in his creative process is both fascinated and inspired by the new media. He is enthusiastic about technology’s potential to move musical art one step further. This allowed Quincy Jones to succeed in creating real hits from ordinary singers and songs. When artists are engaged in these creative processes, they feel they are performing at the peak of their abilities. In my life I also feel that my creative work gives me insights and makes my live rich.

Moreover, I think that creativity is part of what makes me really human allowing me to reach the highest levels of creative performance. Analyzing the creative artists’ professional life and creative act I identified the major personality traits that relate to tests of creativity and that I also try to develop. They include:

These personality traits allow me to bring together various ideas and generate a new point of view or to create a new combination.

Obviously, one has first to learn a language before he or she can talk. Similarly, it is nearly impossible to create anything without the foundation. And just because the artist uses the background from previous works or different cultures does not mean they are not creative. Examination of the artists’ creative process in this paper suggests that analogical thinking is important to the creative process. In general, access to and use of history, myths, legends, experience of other people and different cultures and creativity are related processes. 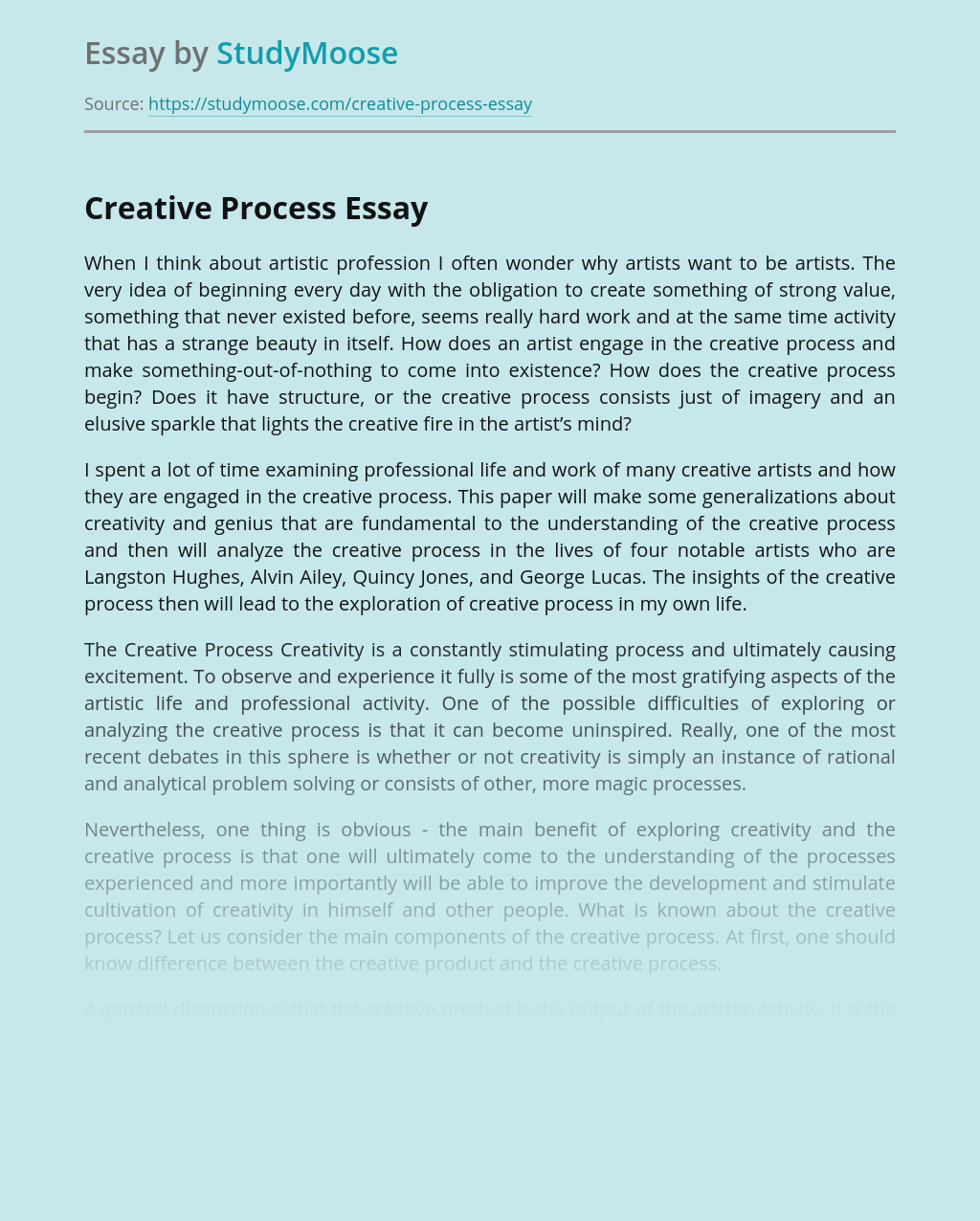