Artist who uses drawing as an expressive medium: Andy Warhol

Artist who uses drawing as an expressive medium: Andy Warhol

Andy Warhola began his career in 1949 as a commercial artist in New York City. He was commissioned to create a series of show illustrations for Glamour, a fashion magazine. He soon became widely popular as Andy Warhol and his works appeared in many magazines such as Glamour, Vogue, Harper’s Bazaar and The New Yorker. In 1951, he created drawings for television. He won the Art Director’s Club Gold Medal for his drawing in the New York Times promoting a new radio program.

Don't use plagiarized sources. Get your custom essay on
“ Artist who uses drawing as an expressive medium: Andy Warhol ”
Get custom paper
NEW! smart matching with writer

He launched his first art exhibition in 1952 at the Huge Gallery titled “Andy Warhol: Fifteen Drawings Based on the Writings of Truman Copote” (AWM, 2007b). Andy Warhol’s art was influenced by many people. The first person to assist and work along side him was his mother, Julia Warhola. Later, Warhol collaborated with other artists such as choreographer Merce Cunningham, composer John Cage, and painter Jean-Michel Basquiat (AWM, 2007a).

Despite his success in fine arts, he was also one of the most popular commercial fashion illustrators in New York City. However, to satisfy his creative urge in fine arts, he started publishing books of sketches: Love is a Pink Cake and 25 Cats Name Sam and One Blue Pussy. In 1955, he was awarded the 35th Annual Art Directors club Award for Distinctive Merit for the ads he created in the New York Times for the I. Miller Shoe Company. He 1964, his drawings appeared in the retail field as window displays for Bowit Teller department stores, Tiffany and Co.

, Bergdorf Goodman, and the I. Miller Shoe Company. He continued to win many more awards for his drawings. He also created paintings that mirrored contemporary American life like Coca-cola bottles, televisions cheap advertisements and comic strips. When he found that an artist Roy Lichtenstein worked on similar kinds of comic strip imagery, Warhol tried to change tracks and do different kinds of drawings (AWM, 2007b).

Andy Warhol used a special type of line drawing known as the blotted line technique while he was still a college student. He used it widely in his art in the 1950s. In this method, Warhol made a pencil line drawing on nonabsorbent paper. He then attached the drawing to a second sheet of more absorbent Strathmore paper. He then inked the pencil lines on the original drawing. Then the second sheet of paper was folded along the hinge and the freshly inked lines were transferred by simply pressing the papers together. The process resulted in the stylistically broken and hesitant lines that are characteristic of Andy Warhol’s illustrations. Warhol often colored his blotted line drawings with watercolor dyes or gold leaf (AWM, 2007a).

Inspired by a discussion with Muriel Latow, a friend, Warhol created works related to the concept of money and the Campbell’s soup cans. In this Money and soup series, Warhol felt that the objects personified the lifeless industrial environment where they were created. Developing the concept of “Mechanical nature’ Warhol in 1963, developed the public persona of a machine (Sherer, 2000).

Warhol’s technique also developed as he worked. Initially Warhol had used hand-cut stencils, rubber stamps, and wooden blocks to make repetitive images in his paintings. In 1962, his assistant Nathan Gluck suggested using photo-silkscreen printing techniques. In this method, Warhol projected a photographic image onto a screen of treated silk, stretched on a frame and the image was later transferred onto the silk. To make the art more lively, Warhol tried to use inking and overlaps. He found that use of colors and the overlaps led to a variety of images and those images could be produced quickly. Moreover, these images appeared to move with each print. Warhol also could now use other people for printing purposes. Using labor and photo-silk printing technology, Warhol produced a vast amount of art (AWM, 2000).

Warhol’s drawings of the early 1960s have an experimental nature as the artist tried to create a fusion of various elements: photography, collage, written instructions of working studies, and on occasion, pencil and crayon or watercolor. He thus evolved from an artist who drew living things to an artist who identified and drew icons of pop culture such as soup cans, money, newspapers, political figures, and film stars. Warhol’s drawings from 1968 until 1987 revolved around investigation of stardom. Exhibition curator Mark Francis writes, “For more than 30 years Andy Warhol created a coherent, consistent, and prolific body of drawings in which his deepest fears and his ideals of beauty were plainly and simply outlined” (Walker Art, 1999)

When Marilyn Monroe committed suicide on August 4, 1962, Warhol was moved to produce a series of silk-screenings that made him very famous. In these works, he overemphasized her make-up and dyed blonde hair thereby symbolizing glamour and fame. Success in this line made him create images of other celebrities such as Elizabeth Taylor, Elvis Presley and Marlon Brando. He then conducted his most successful exhibition at New York’s Stable Gallery. There, he showcased eighteen images, including Golden Marilyn, 129 Die in Jet, Red Elvis, and several soup can and Coca-Cola bottle pieces. The exhibition made Warhol a celebrated artist (AWM, 2007b).

Andy Warhol later diversified into several art forms and proved himself as a talented painter, sculptor, graphic artist, filmmaker, music producer, author and publisher. But behind each one of these roles, it was his extraordinarily creative drawing skills that laid the foundation for success. 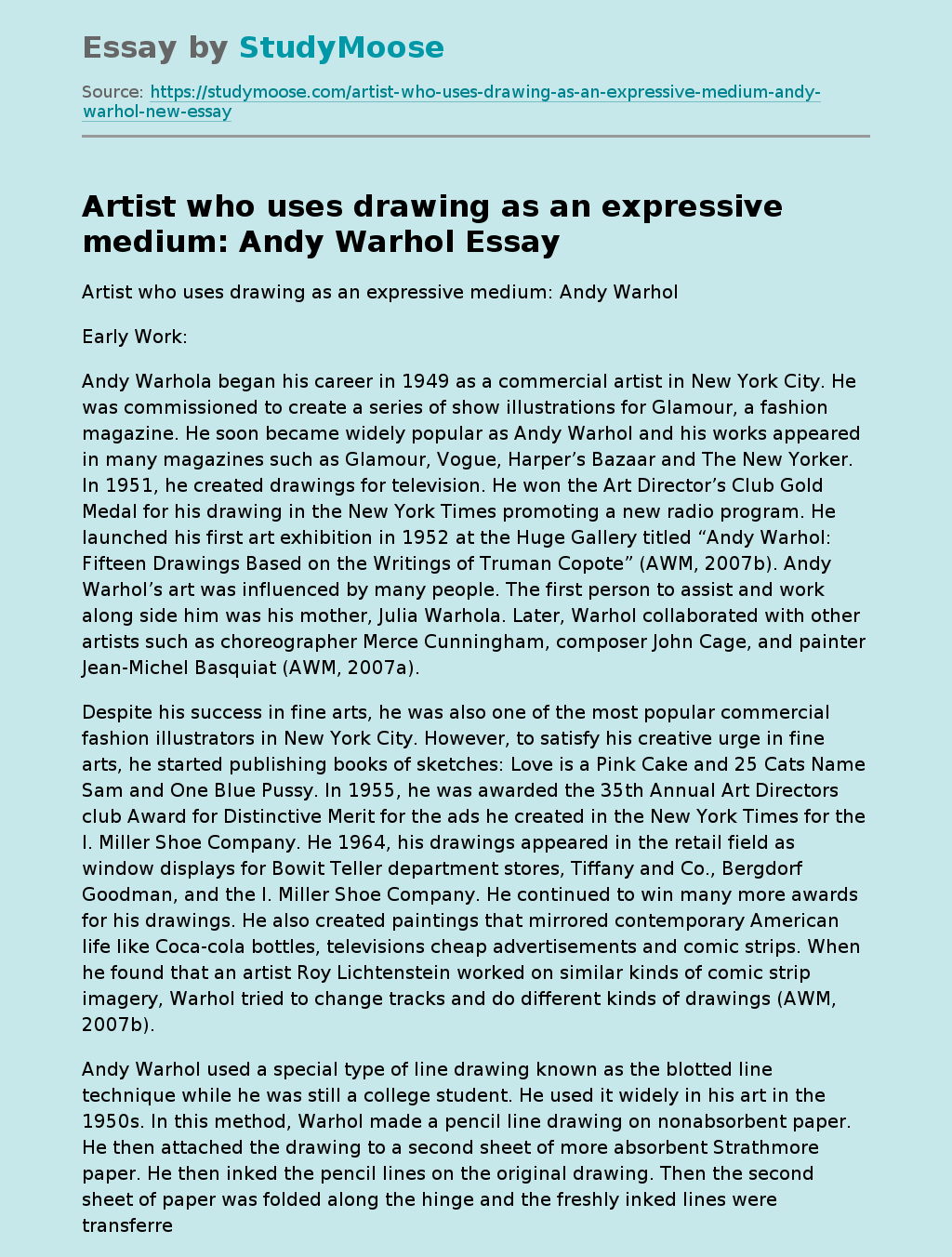