1. Discuss how the issues with the Arthur Anderson case may have played out differently if the Sarbanes-Oxley Act had been enacted in 1999.

The provisions of Sarbanes-Oxley Act help minimize the likelihood of auditor failing to identify accounting irregularities by the following requirements: 1). Improving the internal control. Auditors comment on the internal control of the firm should be reported. 2). Reinforcing supervision for financial irregularities. This act boosts to establish an independent the Public Company Accounting Oversight Board, which is responsible for overseeing the performance of the certified public accountants and the accounting firm.

3). Strengthening the independence of auditors. It means that the act restricts auditors to audit activities only. 4). Encouraging financial disclosure. It also provides whistle-blower protection. 5). Increasing the penalties of ethical and legal misconducts. There are severe monetary and criminal punishments imposed on those auditors that give false statements. Further, the act lays down the quality of auditing required, the quality of control, and independence standards and rules.

2. Discuss how the issues with the Arthur Anderson case may have played out differently if the Sarbanes-Oxley Act had been enacted in 1999. One specific provision that could help greatly is Section 203, or Auditor Partner Rotation. This section calls for auditors to rotate partners assigned to clients, so that fresh eyes can review the work that has been done. This helps to prevent the “partner in crime” relationship that contributed to Andersen’s downfall. Finally, the provisions make the entire auditing process more transparent, so that people on the outside of the company such as shareholders, can easily see what is happening.

3. Determine and discuss which elements of the framework for ethical decision making in business (from Chapter 5) played the biggest role in the Anderson case. Arthur Andersen and partner Clarence DeLany founded Arthur Andersen LLP in Chicago in 1913. After 90 years of hard work, this accounting firm we become known as one of the Big Five largest accounting firms in the United States. Andersen set standards for the accounting profession and advanced new initiatives on the strength of its then undeniable integrity.

By the 1980s, standards throughout the industry fell as accountancy firms struggled to balance their commitment to audit independence against the desire to grow their consultancy practices. Andersen rapidly expanded its consultancy practice to the point where the bulk of its revenues were derived from such engagements, while audit partners were continually encouraged to seek out opportunities for consulting fees from existing audit clients. By the late-1990s, Andersen had succeeded in tripling the per-share revenues of its partners. Arthur Andersen was constantly accused of wrong doing starting in 1998. Andersen struggled to balance the need to maintain its faithfulness to accounting standards with its clients’ desire to maximize profits, particularly in the era of quarterly earnings reports. Andersen has been alleged to have been involved in the fraudulent accounting and auditing of Sunbeam Product Waste Management, Baptist Foundation of Arizona, WorldCom and Enron.

On June 15, 2002, Andersen was convicted of obstruction of justice for shredding documents related to its audit of Enron, resulting in the Enron scandal. Nancy Temple (Andersen Legal Dept.) and David Duncan (Lead Partner for the Enron account) were cited as the responsible managers in this scandal as they had given the order to shred relevant documents. Since the U.S. Securities and Exchange Commission does not allow convicted felons to audit public companies, the firm agreed to surrender its licenses and its right to practice before the SEC on August 31, 2002, effectively ending the company’s operations.

The Andersen indictment also put a spotlight on its faulty audits of other companies, most notably Sunbeam and WorldCom. The subsequent bankruptcy of WorldCom, which quickly surpassed Enron as the biggest bankruptcy in history, led to a domino effect of accounting and like corporate scandals that continue to tarnish American business practices. On May 31, 2005, in the case Arthur Andersen LLP v. United States, the Supreme Court of the United States unanimously reversed Andersen’s conviction due to what it saw as serious flaws in the jury instructions

4. Discuss how the situation at Arthur Anderson may have played out differently if their senior management had displayed the habits of strong ethical leaders. Standards of any kind are a direct representation of its leadership. If organizational compliance exists, it will trickle down throughout the organization. Arthur Andersen’s ethical dilemma deals with greed. The firm became very greedy and sloppy. They no longer believed in rock solid accounting principles that had been instilled in earlier years. They were more into getting money whether illegally of legally. They felt like they were getting paid more to hide things than to audit. They tried to shred the Enron’s documents even after the court told them to stop all activities of such.

Arthur Andersen somewhat helped Enron with their accounting scandal. Had Andersen done the job in an ethical manor, thousands of people would not be out of a job or even worst their retirement funds. One of many mistakes that condemned Arthur Andersen, was the shredding of those Enron documents. Even if the company was lying they could have gotten away with it. If they stopped shredding the documents the jury would not have found them guilty and ruin their reputation. The case did get reversed but the damage was already done. To take it further back than that, I would have maintained acceptable accounting principles like the founding fathers of the company situated. Andersen was doing perfectly fine, financially at least, before it crumbled due to bad decision making. 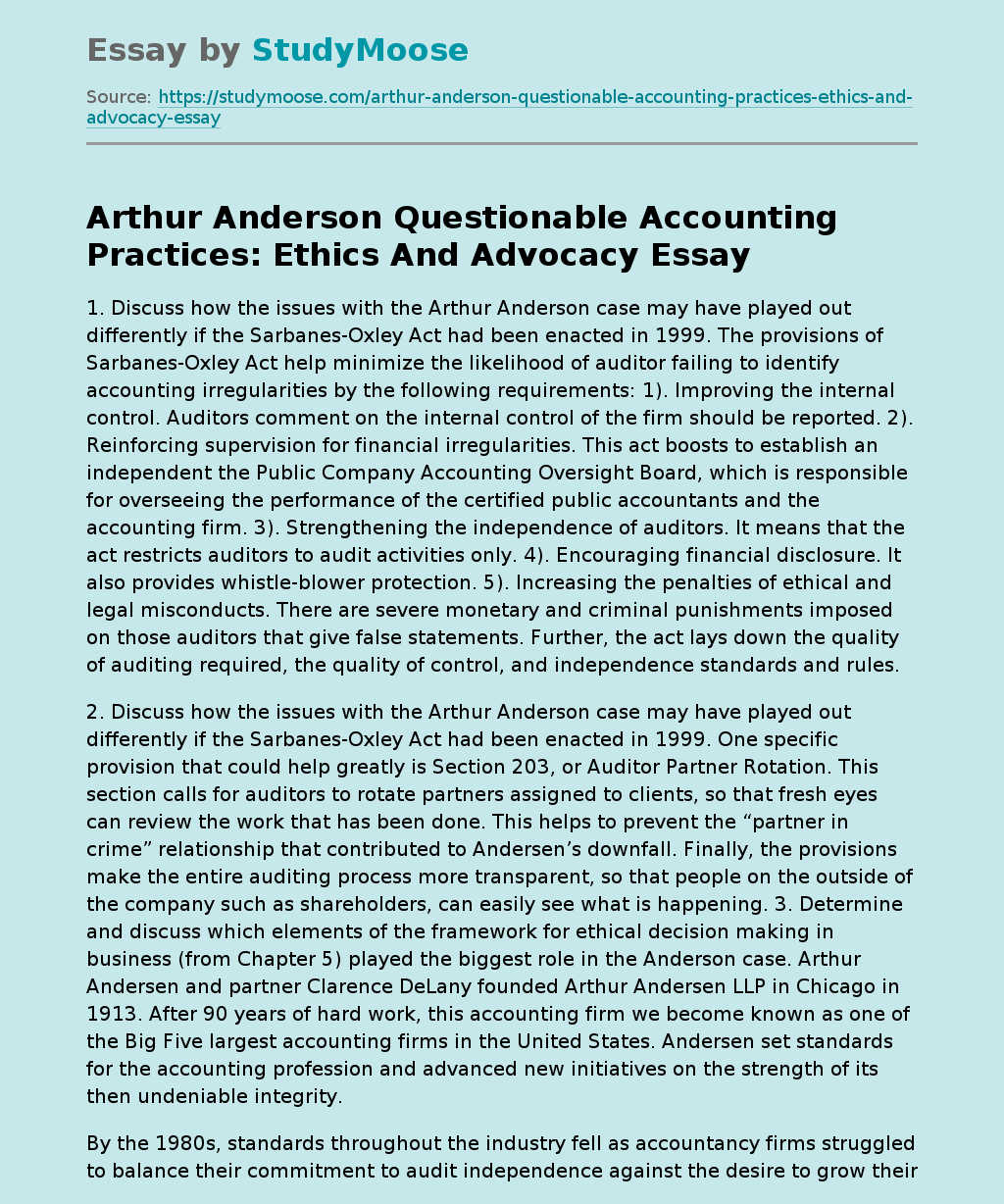